Tamera in Bonoboville on Supermoon Eve 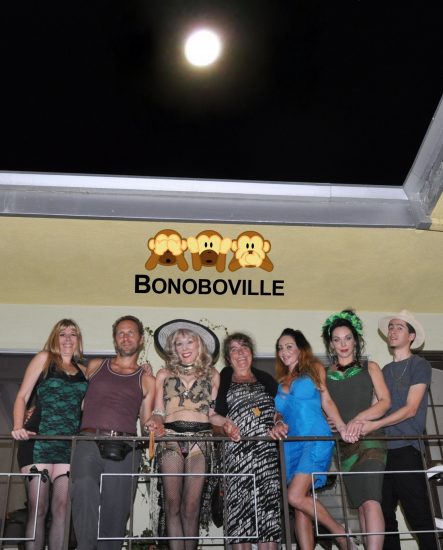 It’s Supermoon Eve in Bonoboville, just before the total lunar eclipse, when we welcome a different kind of luminosity into the Womb Room, a human beacon of light illuminating peace through pleasure on Earth.

Two visionary leaders of the “healing biotope,” TAMERA, an extraordinary human community, grace my broadcast bed, sharing their narratives and their wisdom—bright and globular as this first Fall full moon—and even partaking in a lusty round of Bonoboville Communion. Now that’s communal ecstasy with a twist of ecosexuality and a powerful moonshine chaser.

Forged in the fire of anti-war fervor and the sexual revolution, the “village” of Tamera was conceived in Germany in 1978 and founded in southern Portugal in 1995 on principles of peace, trust, ecology and “free love.” Today 170 people live, love and work in Tamera, connected with its growing international network and base stations in Israel-Palestine, Colombia, Brazil, Kenya and other countries, each an interconnected part of Terra Nova, the global platform for their mission of peace.

Sabine Lichtenfels, “global peace ambassador” and one of the original founders of Tamera, is our first guest. Back in ‘78, when Sabine was a young divorced mother with a vision of community, she met, joined forces and fell in love with eminent psychoanalyst, art historian, prolific author and one of the leading figures in the 1968 German student movement, Dr. Dieter Duhm (along with their common friend, Charly Rainer Ehrenpreis). That love gave birth to Tamera and Terra Nova, a village and a movement.

Accompanying Sabine is “next-generation” Tamera and Terra Nova leader, Benjamin von Mendelssohn. Trained as a healer and dancer, Benjamin is a member of the remarkable Mendelssohn family, descendants of the famed 18th century “Enlightenment” German Jewish philosopher, Moses Mendelssohn, and his grandson, the composer Felix Mendelssohn, as well as Joseph and Abraham Mendelssohn who, during the late 18th-20th centuries, ran one of the preeminent banking houses in Europe. Continuing the family legacy in his own revolutionary way, Benjamin is director of the Grace Foundation for Humanizing Money, among other positions within the Tamera community.

Sabine and Benjamin visit Bonoboville while on a “Walking Water” pilgrimage that started in the Owens Valley (one source of LA’s water) and took them by foot (!) all the way to LA, as they studied the landscape and met with indigenous people concerning their project, “Restoring Water and Healing Love as Keys for a New Culture.” According to Tamera, “What water is to nature, love is to humanity.” It’s true. When it comes to real estate, it’s location, location, location. In life, love, and good sex, its lubrication, lubrication, lubrication. 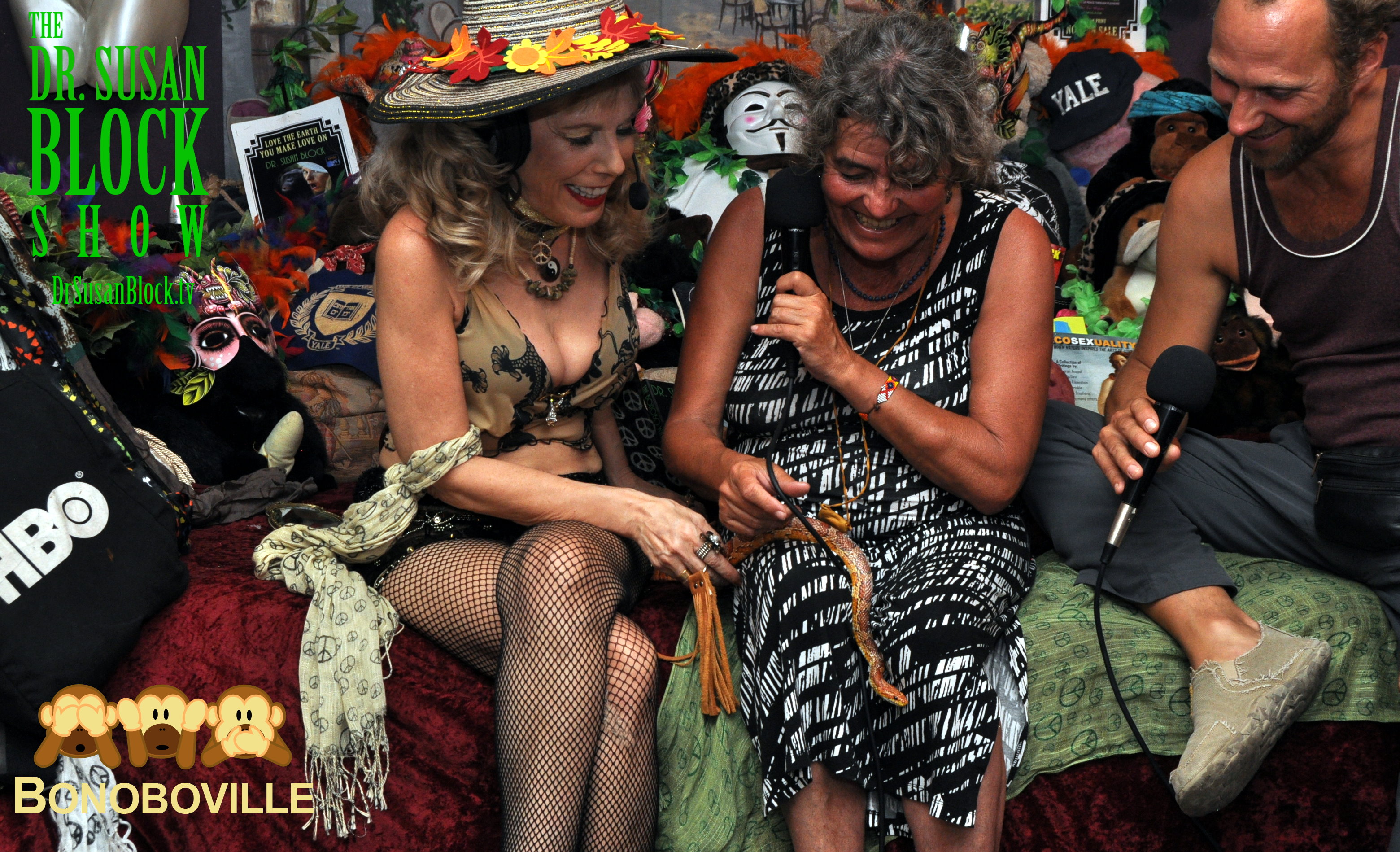 It’s such a pleasure to have these two angels of free love with German accents join us in our little Bonoboville in West LA while on their mission of love and liquidity around the world. Even my Snake Eve comes out of her shed to welcome them slithering right between Sabine’s legs! No problem there; Tamera is not just a healing biotope for humans, but for building and nurturing love and empathy between us and our non-human animal cousins. Amen and Awomen to that.

This visit is thanks to the international bonoboësque matchmaking skills of Dr. SerenaGaia Anderlini D’Onofrio, co-editor of Ecosexuality: When Nature Inspires the Arts of Love, the sumptuous new collection of essays to which I was honored to write the foreword. Both Tamera co-founders have essays in Ecosexuality, Sabine’s on “Lilith’s Words: I Love Being a Woman” and Dieter’s, “Sexpeace and Greenpeace: Peace between the Sexes and Peace with Nature.” SerenaGaia is traveling right now, but we’re happy to have Ecosexuality co-editor Lindsay Hagamen call in from her own “Bonoboville,” the ecosexual community of Windward in the woods of Oregon. When Lindsay arrived there seven years ago, one of the first books the other residents recommended she read was The Sacred Matrix: From the Matrix of Violence to the Matrix of Life by Dr. Dieter Duhm. 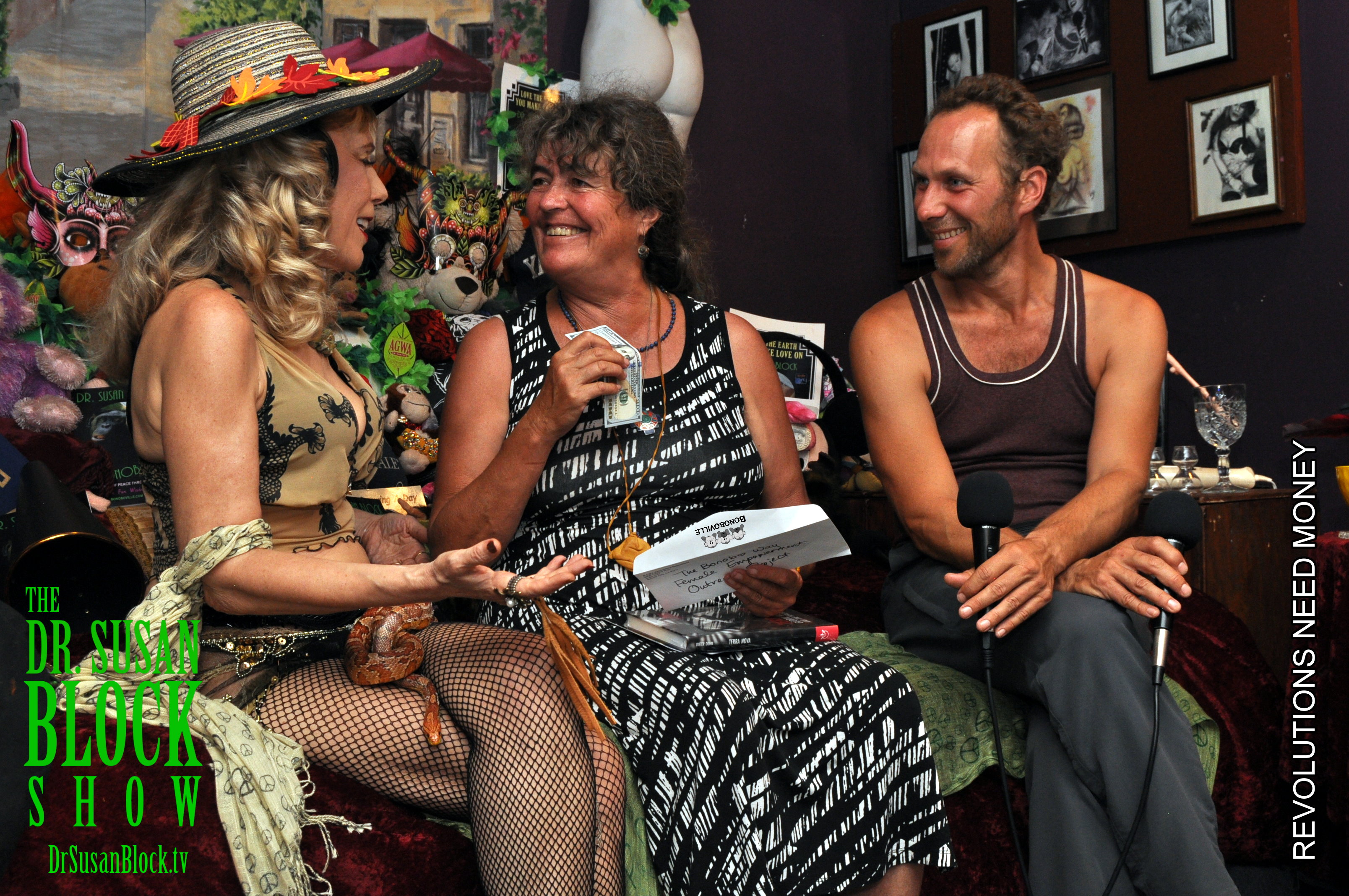 Duhm’s approach to sustainability “from the inside out” resonates strongly with Lindsay, as it does with so many of the new ecosexuals. For us, Tamera is like a petri dish that shows that the principles of the Bonobo Way can work quite well within a fairly large human population of agreeable individuals, if the conditions are right. The experiment isn’t over, but that’s no reason not to take the good news to the next global level. Paradigm change is in the air.

One big shift in the way we humans think of ourselves is that we’re now turning from the old “killer ape” paradigm of institutionalized murder and male dominance to the new “Bonobo Way” of peace through pleasure and female empowerment. At the start of 2015, Dr. SerenaGaia joined me in declaring this the Year of the Bonobo, and throughout these months, we and many others are gathering in solidarity with the ecosexuality movement and the bonobos. Love is in the air. Even the Pope appears to be going bonobos, encouraging America’s leaders to share and respect our environment, not to mention the simple, sometimes inconvenient fact that he too is an American, a native of that area south of our so-called border: South America.

Speaking of spirituality, Sabine’s vivid dreams of Lilith, Eros and other archetypes give her courage and guidance. The name “Tamera” itself, said to mean “Original Source,” came to her in a dream. She calls it an “acupuncture point of peace” for healing the civilized world of its greed and destruction, military murder and corporate mayhem. And she doesn’t just talk about it; she walks the talk, traveling to some of the worst, war-ravaged, poverty-stricken, drought-ridden places. Her mission and passion are one and the same, to share her love with the world.

Thus it should come as no surprise to those of you who have been following our Bonobo Way Female Empowerment Outreach Project (initiated so auspiciously on the August Supermoon), that Sabine is the new recipient of this very special award, made possible by a Bonobo Way reader, philanthropist, environmentalist and investor in female empowerment who shall remain anonymous, at least for now. It’s truly a pleasure to give the telltale envelope to this Mother Teresa of Free Love, to see the surprised pleasure light up her eyes like the Supermoon as she opens it, and I’m sure we will be giving and sharing more and more. 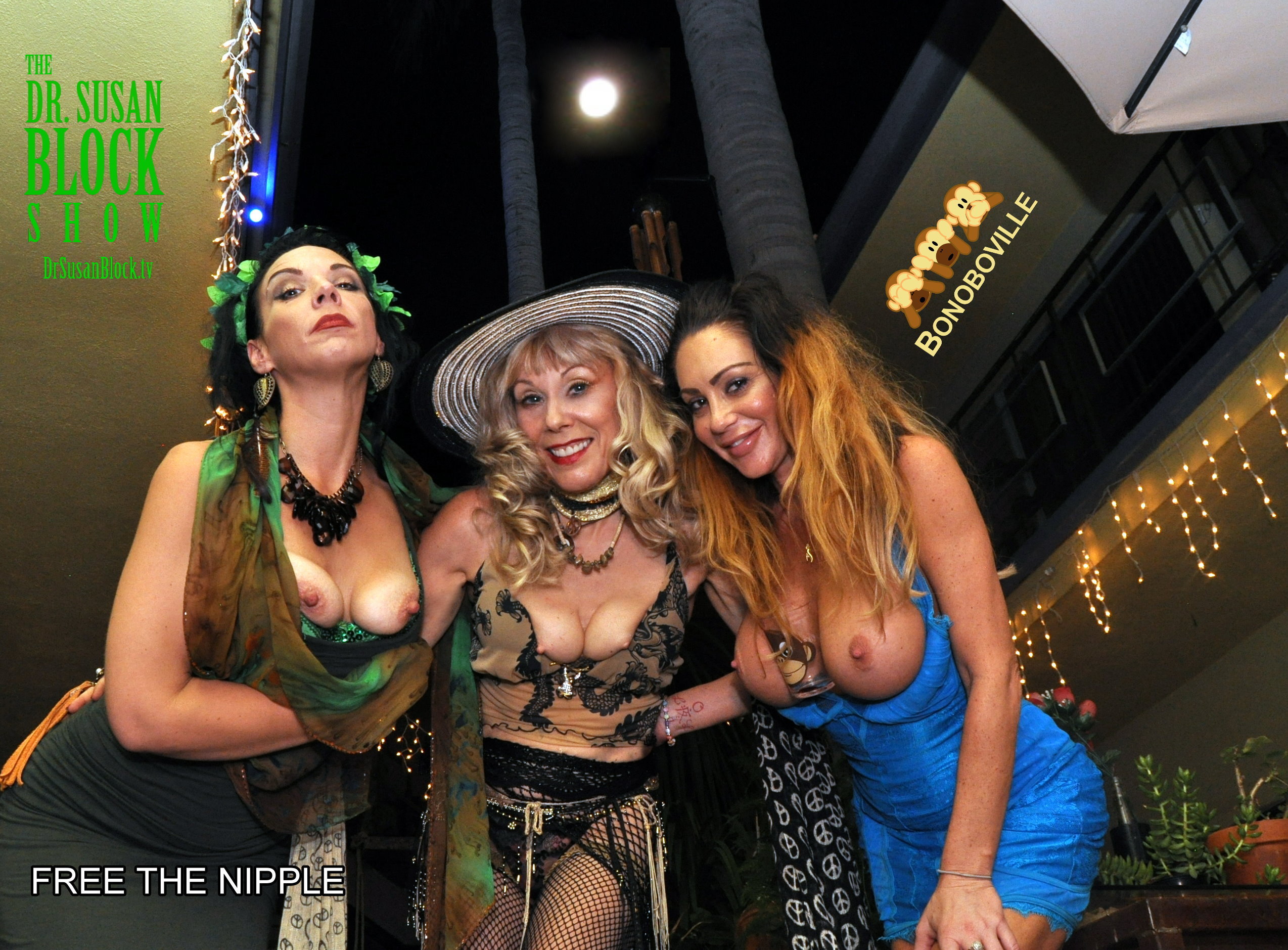 Our discussion expands to include Wiznu Labs director Michael Wisnieux (who just did a show with the awesome artwork of Abby Martin) inquiring into the complex financing of a healing biotope, Joseph the Bitcoin King and alpaca farmer who asks about Tamera’s use of morphogenetic fields, and Institute therapist Chelsea Demoiselle, also in the Oregon woods (what’s with all these bonobo sapiens in Oregon?) who just calls in to share the good vibes with all.

Topics of discussion range from eros as the “core of divine power” to healing violent crisis areas, from turning jealousy to compersion to water retention landscaping, and then things get a little heated when we enter the realm of trust, one of the keys to Tamera’s biotope. Of course, trust is essential for any long-term relationship between humans, especially where sex is involved. But arousal and excitement thrive on novelty and mystery. As a sex therapist in private practice, I see all too often how “trust kills lust” in many marriages and other relationships that slide from the thrill of those first lust-filled years down the sinkhole of monogamous monotony or branch off into cheating and deception. I’m inspired by Tamera’s heady mix of trust and lust, closeness and openness, within a potent bonoboësque cocktail of community, truly a “greenhouse of peace.” The way Tamera residents challenge human civilization’s “prison of privacy” with the healing power of communal ecstasy is also impressively bonoboësque. 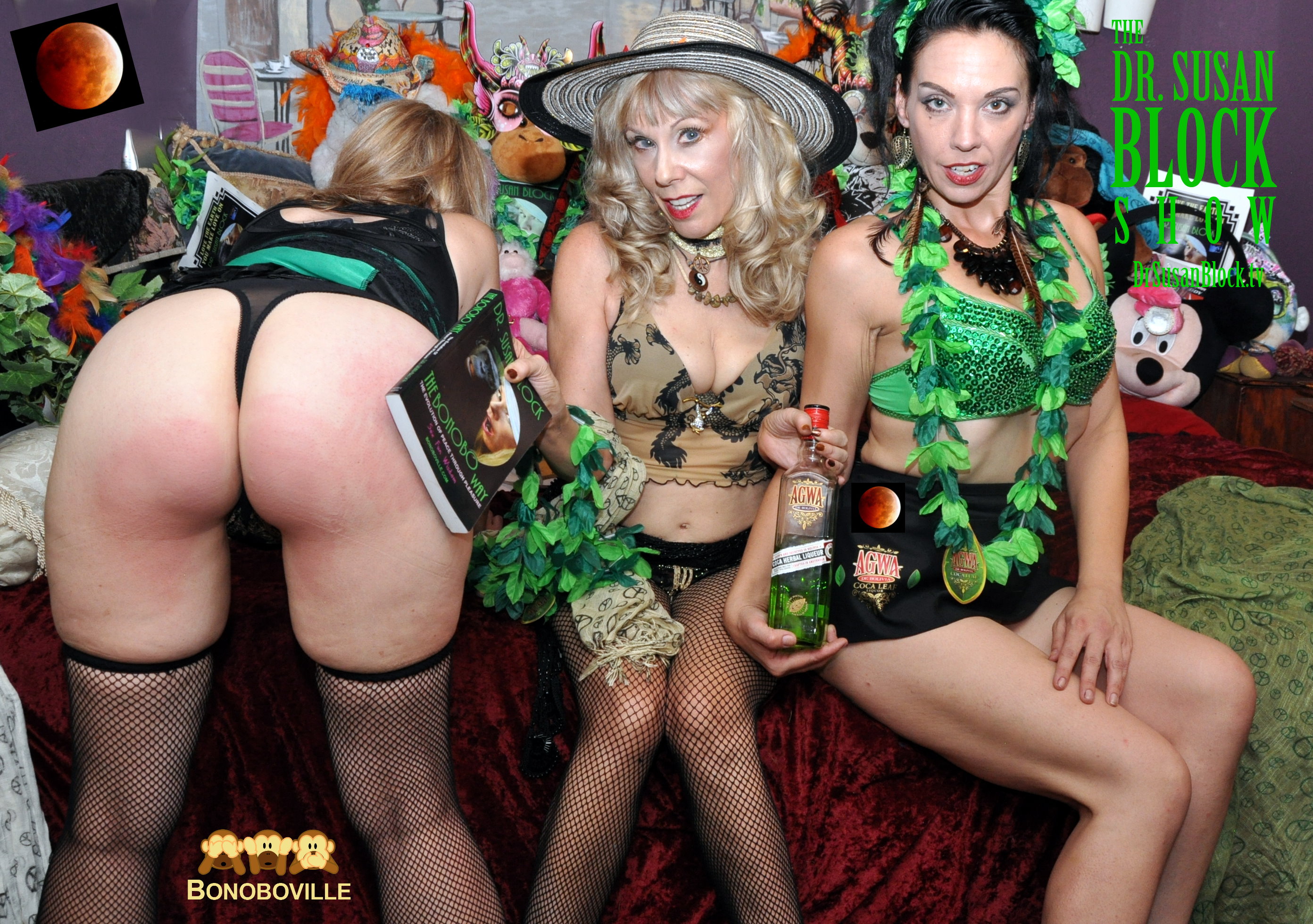 Of course, we have our own ways of doing that here in our own little biotope, one of which we call Bonoboville Communion. Interestingly, the root of “communion” is the same as “community,” “communicate,” “common” and “commune”—not to mention communism!—from the old Middle French comuner which means “to share.” First up to show how we share Bonoboville Communion to our visiting global peace ambassadors are the lovely and generous Dayton Rains—now a webcam and phone therapist with the Institute! —and the talented artist Helane (celebrating her birthday tonight!) who did the fabulous bonobo drawing for Bonobo Way, and is now creating a series of bonobo cartoons that will soon become something spectacular. Both are recipients of the Bonobo Way Female Empowerment Outreach Project, and they are certainly erotically empowered on this pre-Supermoon night as they doff their tops to “free the nipple,” lick the salt and down the herbal Agwa de Bolivia Coca Leaf Liqueur, each as beautiful as Aphrodite in her own way.

Our guests become intrigued as I lick the lusty salt of Communion from the succulent nips of DrSuzy.Tv show producer Biz Bonobo, a.k.a. Elizabeth Aston, decked in ecosexual Agwa leaves. Whereupon Sabine graciously and teasingly pulls up her skirt and offers her bared knee. I immediately kneel before her, looking up into her soulful eyes as I lick the sacramental salt from her thigh just above her knee. Now getting the idea, Sabine takes her Communion from Dayton’s delectable neck, and Benjamin gallantly licks up sloppy seconds, whereupon the Womb Room erupts in applause, gasps of glee and sighs of empathetic pleasure. Communal ecstasies all around. 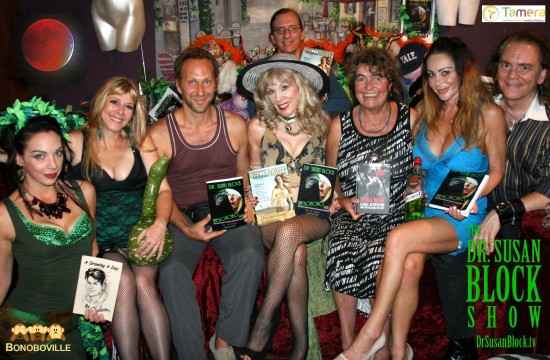 As the live broadcast ends, the after-party begins, and we go out to bathe in the beams of the Supermoon. Birthday Girl Helane moons the moon, and Biz and I put her over our knees for a birthday book-spanking with The Bonobo Way and Dr. Dieter Duhm’s new (hardback!) book Terra Nova, Global Revolution & the Healing of Love. As Capt’n Max and I retire to mix almost 30 years of trust with a little stranger-stimulated lust, the villagers of Bonoboville howl at the Harvest Moon, and Sabine and Benjamin continue their pilgrimage into Ojai and beyond. May all the Gods and Goddesses bless them on their mission of peace through pleasure and community. 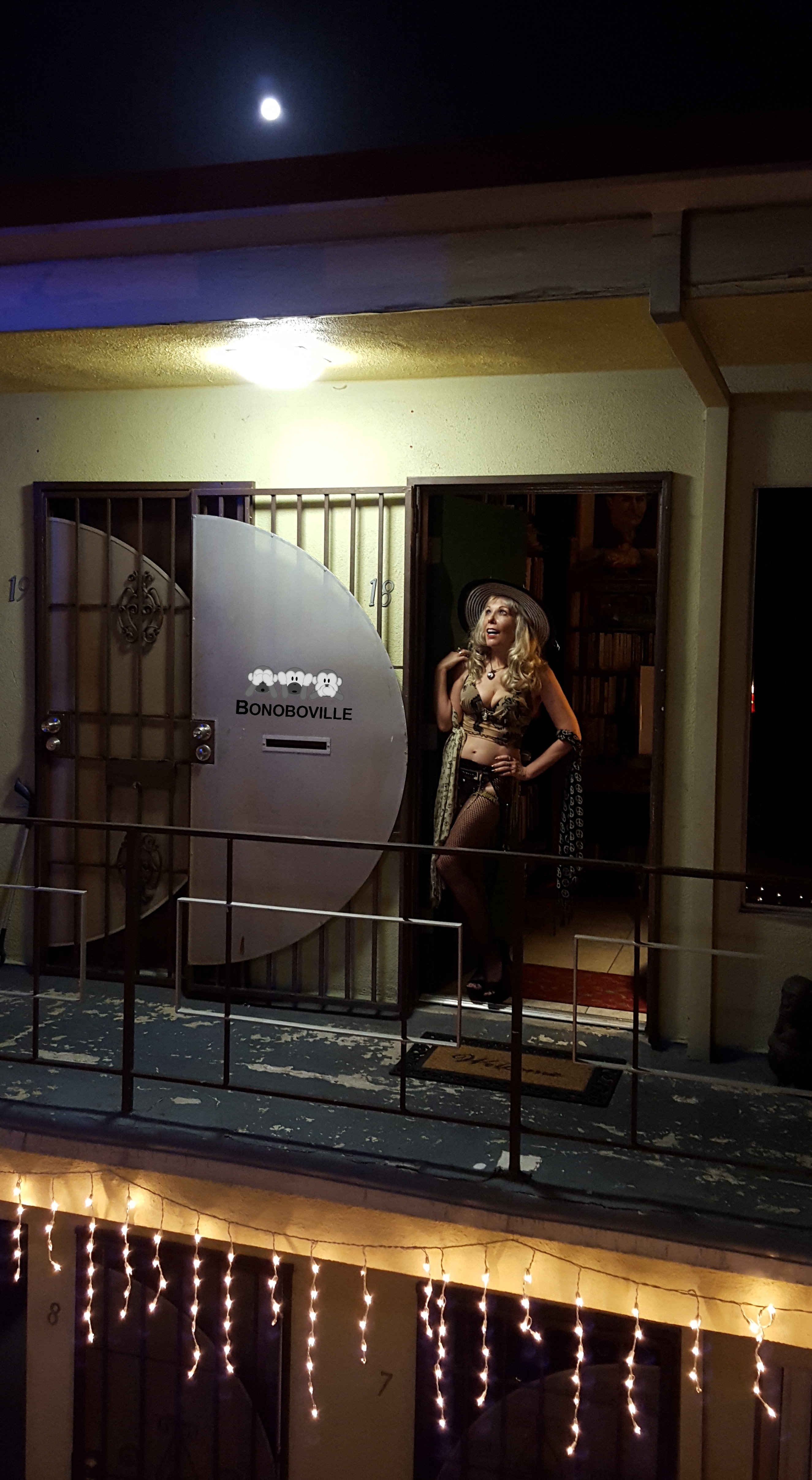 Dreaming of Tamera under the Supermoon. Photo: Abe 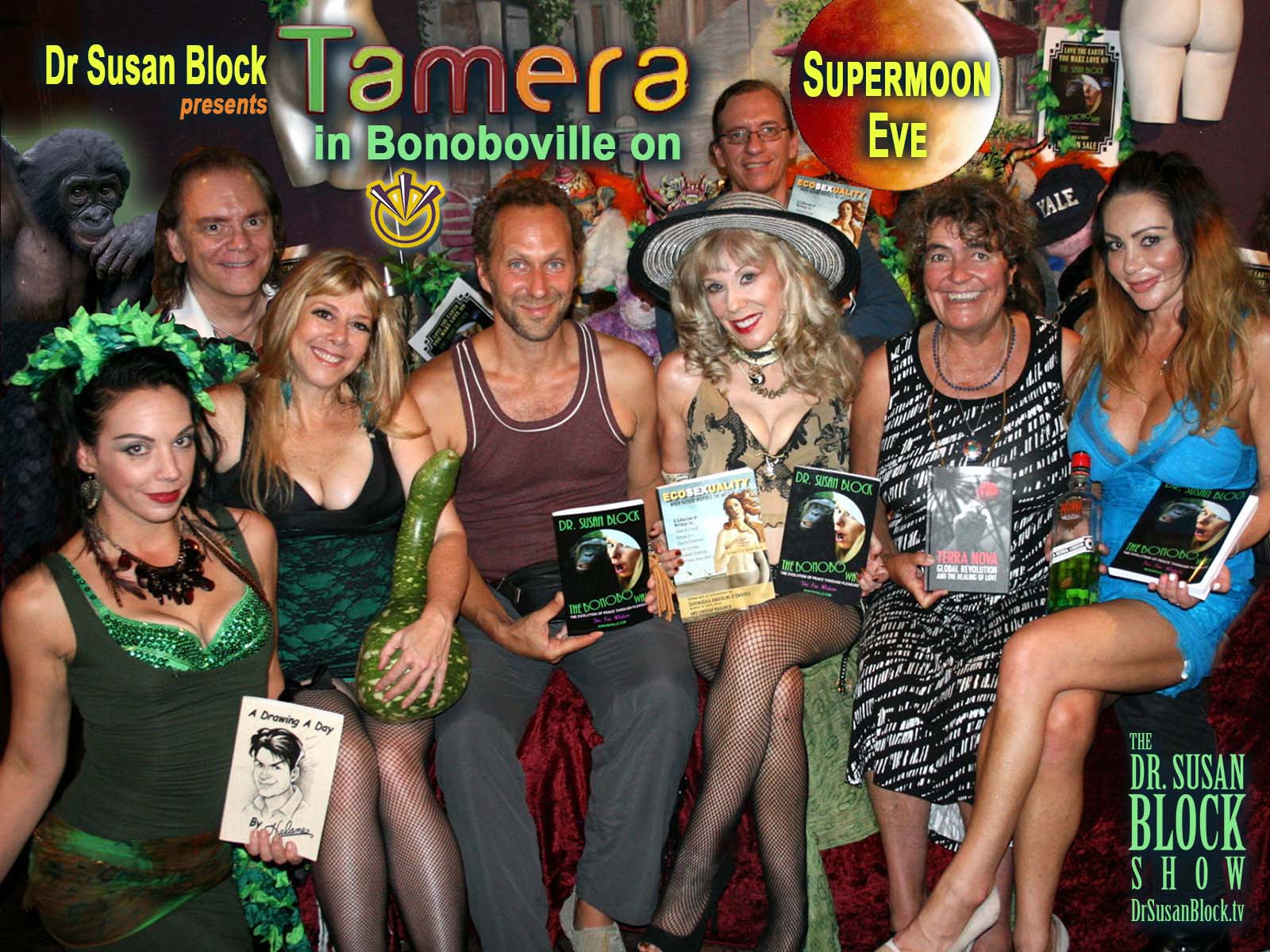