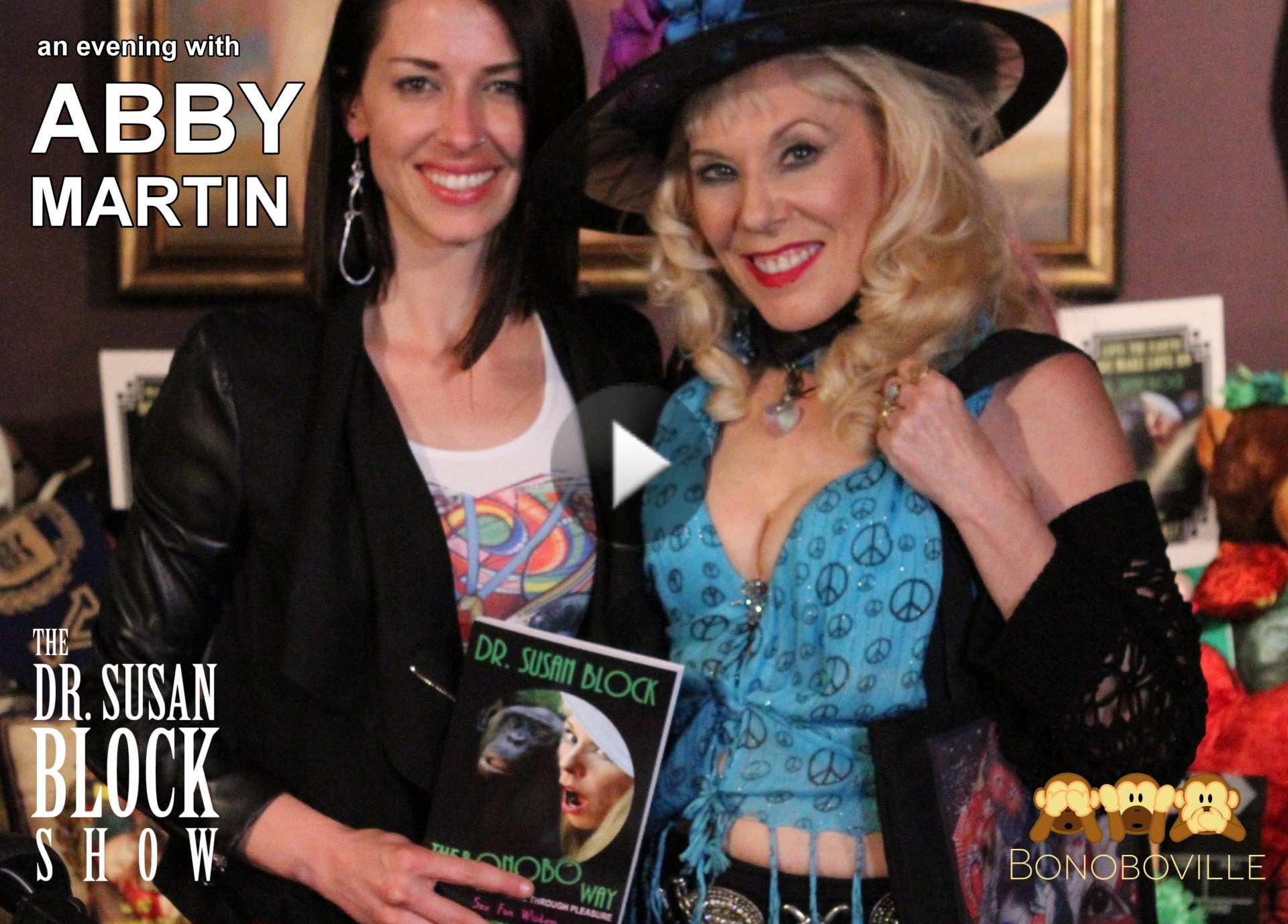 Abby Martin is one of the most exciting voices in news media today, so it’s a great pleasure to spend this entire show just talking with her. Well, my snake Eve takes a minute to slither sensuously around Abby’s beautiful neck, but most of this show, we just sit and talk about a range of subjects, from American hegemony and police brutality to the power of the clitoris. Since Abby is one of the most fascinating, truth-telling talkers in journalism today, for me and most of Bonoboville, it’s a 90-minute progressive political braingasm. Sapiosexuals beware, you’re in for a treat. Watch the video here. 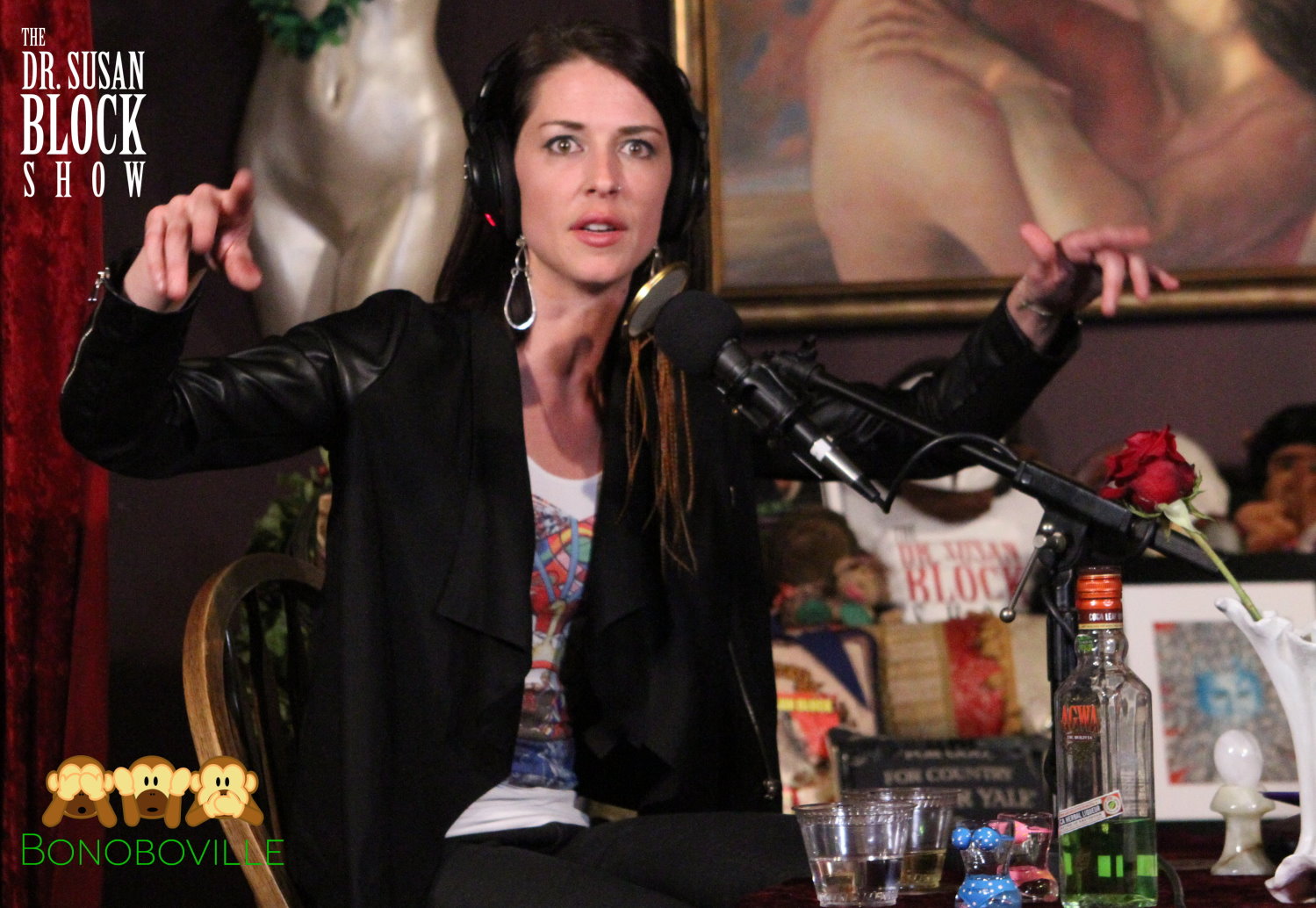 Abby Martin tells it like it is! Photo: Felix

If you’re wondering “Abby Who?,” the best place to start your Abby Martin Education is with archives from “Breaking the Set,” her amazing former show on RT TV—and yes, comrades, that’s “Russia Today”… in English. The program showcased her dramatic, heartfelt, astute and uncompromisingly reformist style of investigative journalism. Over the course of some 500+ episodes, she calls out a fools’ parade of politicians, warmongers, “banksters” and corporate crooks, from the Bushes to the Clintons, Rand Paul, Dick Cheney, John McCain, Obama the “Drone King,” Nestle, Monsanto and many more. Much as I am loyal to Mother Yale, I particularly love how she skewers my alma mater for secretly hosting a lecture given by Nobel peace prize winner and thuggish war criminal Henry Kissinger.

Of course, RT TV is not the best source for news about Russia itself; instead the channel provides a refreshing counterpoint to the American propaganda machines of Fox, CNN, ABC, NBC, ad nauseam. Until she left last month—due to a mixture of personal opposition to Russia’s intervention into Crimea and her own “depression” from processing all the global pain and suffering into which “Breaking the Set” submerged her on a daily basis—Abby was RT’s most enthralling news anchor. 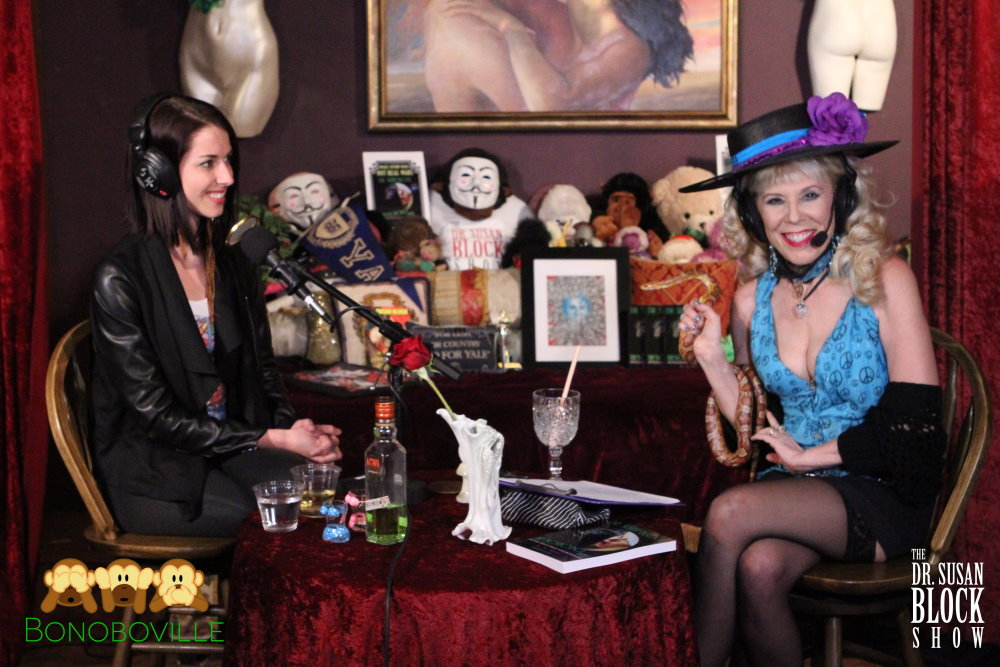 Shattering paradigms with Abby & Snake Eve in the Garden of Eden! Photo: Felix

She certainly enthralled us! Always on the lookout for a wave of clarity in the sea of fear-baiting hawks and sex-shaming bores that pass for news anchors these days, Capt’n Max discovered Abby a few months ago, told me to “watch this woman!” and both of us, not to mention much of Bonoboville, got hooked on her captivating combination of smarts, sex appeal and sincerity.

No doubt, Abby Martin is one-of-a-kind. Yet she is also part of a new growing movement of citizen journalism that is breaking the old paradigm of television news. Hers is the voice of American protest in the spirit of Occupy, and actually, that’s where RT found her, reporting on police misconduct in Occupy Oakland. She is also a passionate peace activist and environmentalist, the founder of Media Roots, an organization for “citizen journalism,” and an accomplished artist who just did a show at The Lab with proceeds going to victims of police brutality, a favorite cause of hers, as well as ours here in Bonoboville. 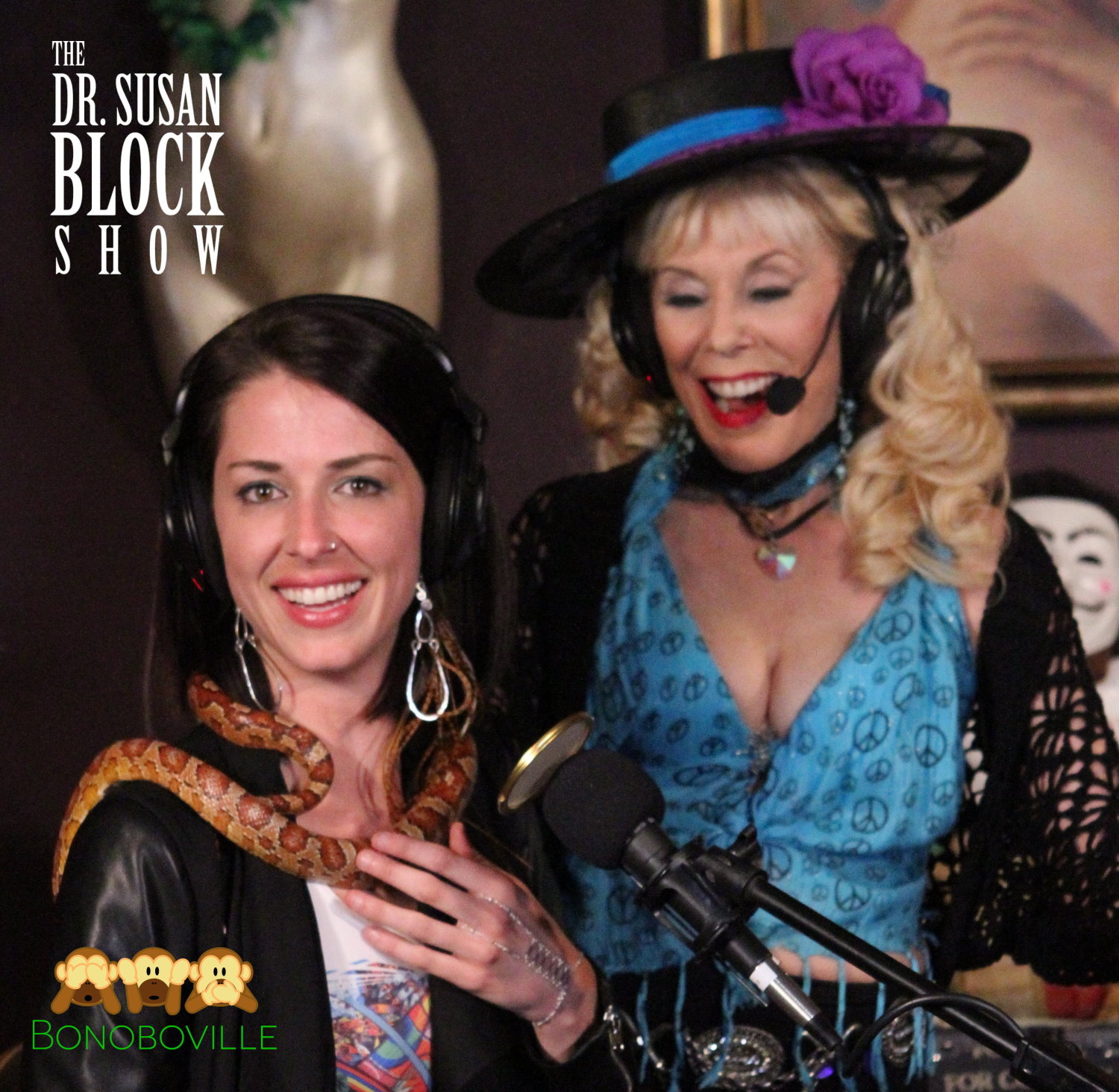 Having seen many of her shows, we’re not surprised at Abby’s brilliance and beauty. The shocker is just how warm, friendly and down-to-earth she is, before, during and after the show. Though this is definitely not one of our “wild” shows, there’s no doubt that Abby fits right into Bonoboville, and we can’t wait to have her back. Listen or watch the archived show, and I think you’ll fall in love with Abby Martin as much as we have and maybe you’ll be inspired to make a difference, even if it’s just to like her Facebook page. 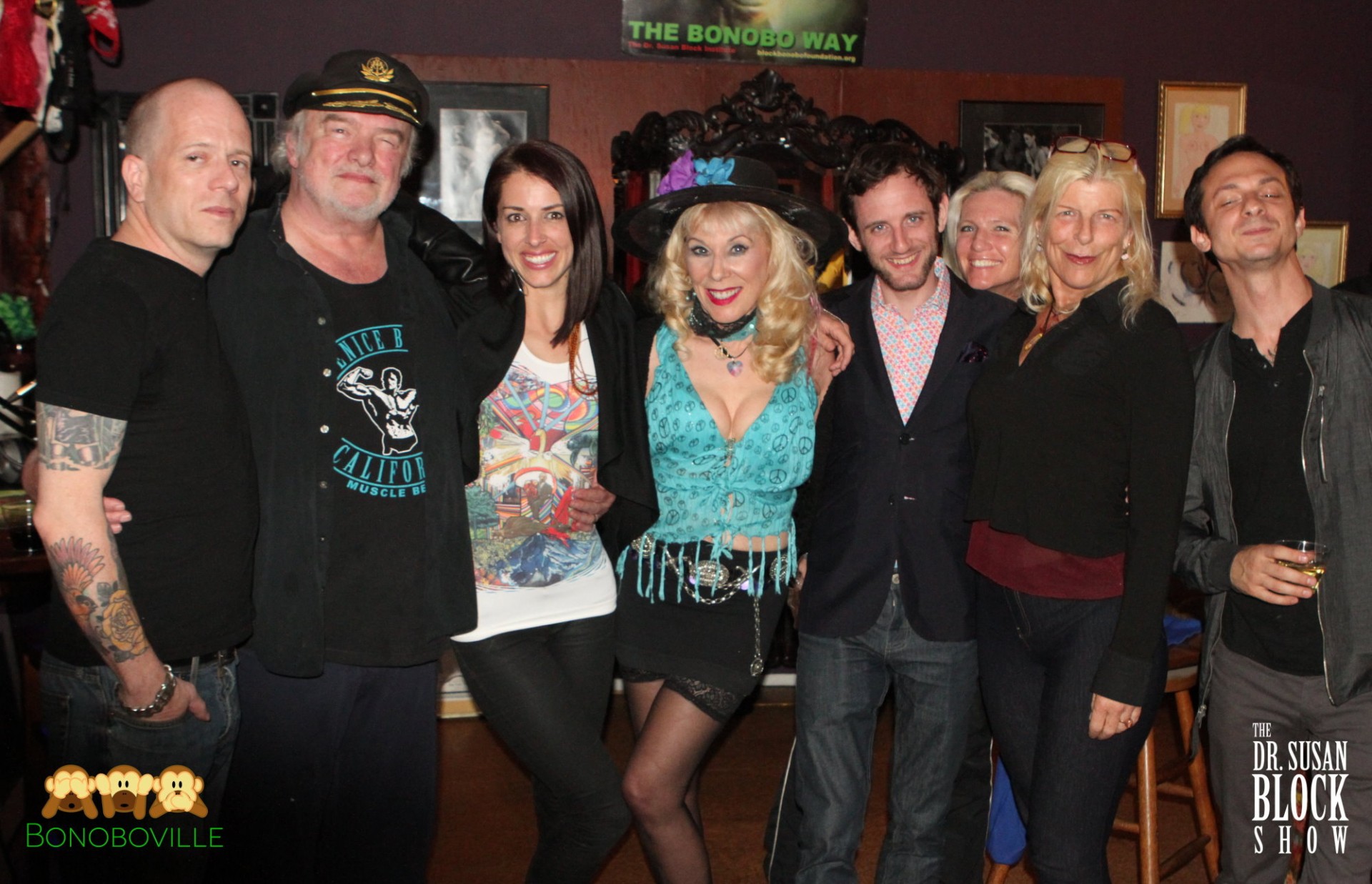 How Abby’s nonreligious Oakland upbringing freed her to follow her conscience; What to do about abusive, racist, trigger-happy police and the corporate banksters they “protect and serve” instead of us citizens; How “citizen journalism” & cell phone cameras are exposing police abuse; How the mainstream media creates “Fear Porn;” Unjust imprisonment & torture in America’s Guantanamo prison camp; U.S. Army Captain Gressback calls a Guantanamo hunger strike a “Long-term Non-Religious Fast”; The dangers of American exceptionalism; The craziness of America’s war on Iraq; How Nestle’s Corp. profits by sucking the world dry of water, plus the eerie alien weirdness of Stephanie, Nestle’s disingenuous PR gal; The Military-Industrial Complex & the Prison-Industrial Complex; How America created ISIS; How the Bonobo Way “Breaks the Set” as a new primate paradigm of peace through pleasure and female empowerment; Dr. Grant (Del Rey’s mentor) calls in to ask Abby where she gets her courage; How art helps release you from depression; Why most of the Institute’s clients are Republicans; Luzer Twersky on the toxic specificity of “Walmart Fat” & the media’s censorship of Bonoboville in his current flurry of interviews; Max hearts Putin; Screw Neutrality (except Net Neutrality)!; Give Sex a Chance; Ibogaine for addiction treatment; Our LAPD break-in; Shout-Out to Dr. Chris Ryan (whom Abby interviewed about Sex at Dawn) for linking human materialism and possessiveness with the “dawn” of civilization; Shout-out to Dr. SerenaGaia and discussion about ecosexuality & the concept of “Lover Earth;” Shout-out to Jux Lii for his birthday; Shout-out to the Clitorisy Project created by artist Sophia Wallace; Why and how everyone should (and soon will) host their own radio and/or TV show, aka “podcast”; Why cannabis, hallucinogens and other natural drugs that alter consciousness should be decriminalized; Drop Pocket Rockets Not Patriot Missiles; Use shame to force corporations to change; What we can learn from watching a chimp down a drone; “Our empathy needs to extend to all the Earth, to every living thing,” Abby Martin—“like” her—don’t be afraid! 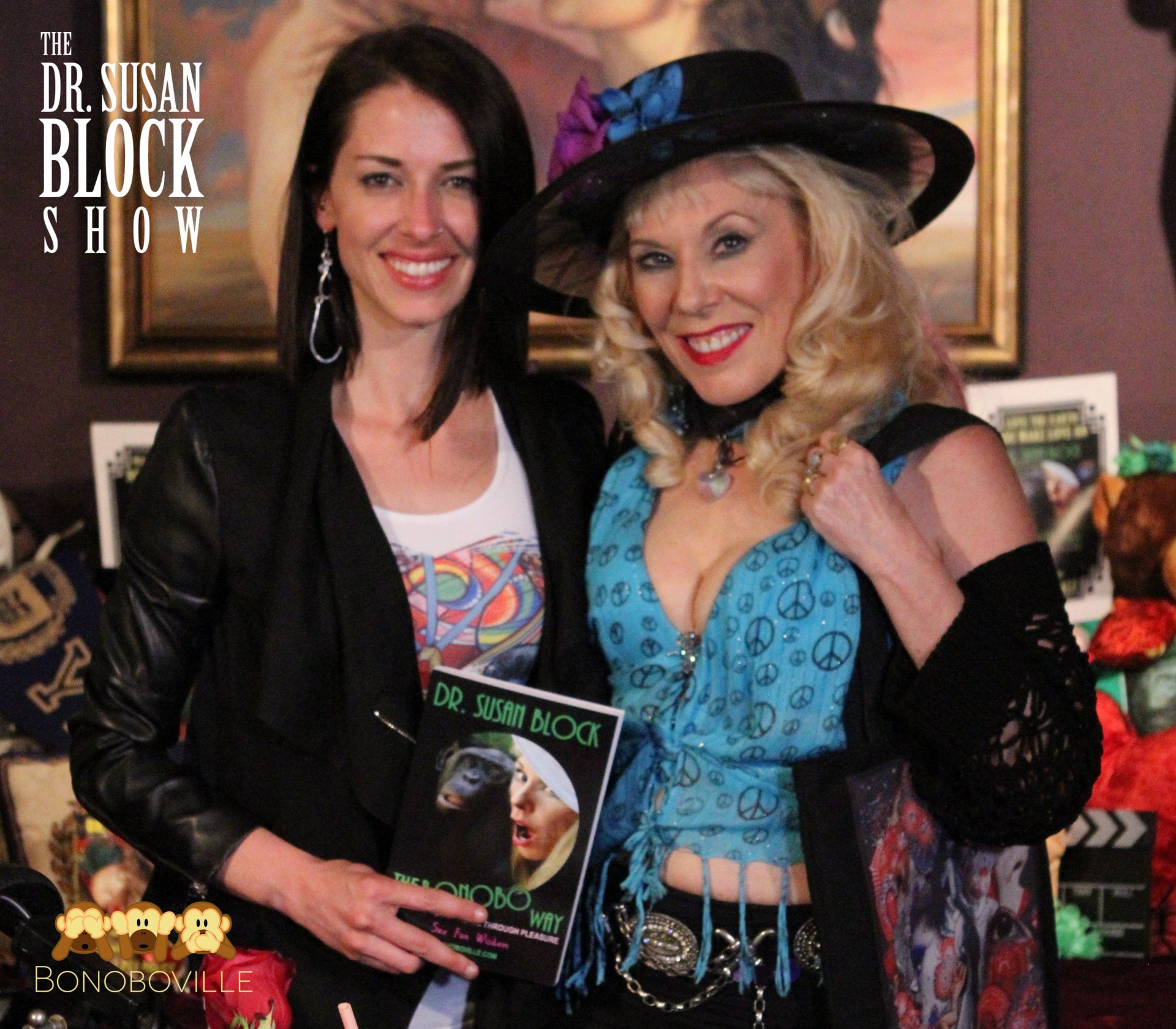