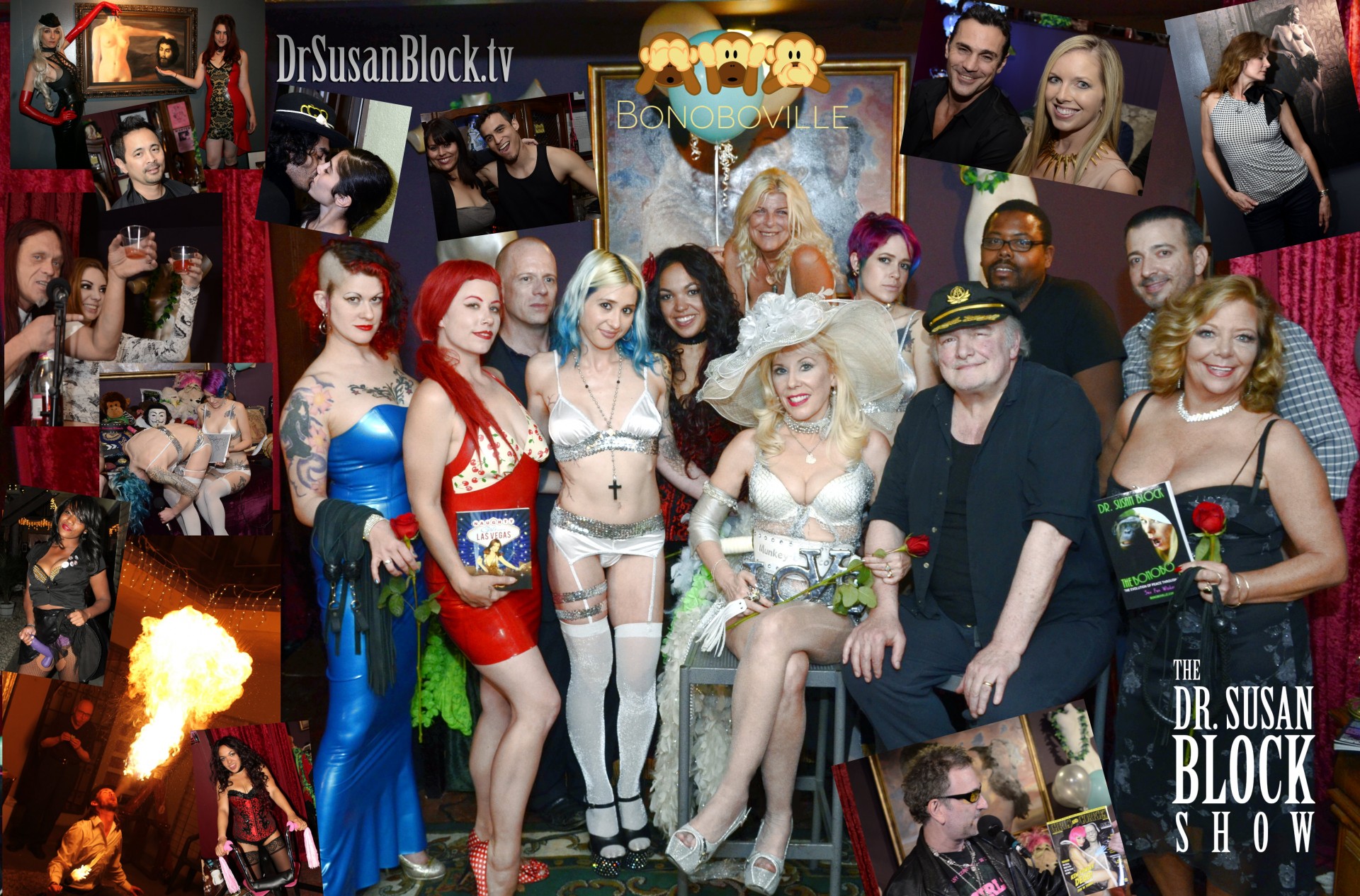 It’s our 23rd year of lawfully wedded love and lust, and Capt’n Max and I start the celebration early, just the two of us “partying like bonobos” in bed, climaxing in each other’s arms, the arms we’ve gotten to know so well but, happily, never tired of, lo these 23+ years. Wild and kinky as we are, we’re also very much married, sharing and being “witnesses” to each other’s lives, creating and constantly recreating the romance that just seems to deepen and grow between us as we age.

But no couple is an island. Certainly, we aren’t! As much as we cherish our two-way intimacy, we need our Bonoboville community to keep us from going insane or letting our monogamy turn to monotony. One reason our “monogamish” (with a hat tip to Dan Savage and the forthcoming Tao Ruspoli film of that name) marriage seems to work is that we share our love, lust and romance with our Bonoboville of friends, lovers and interesting strangers.

Twenty-three is an odd number. According to the wedding anniversary bots, the gift material for 23 years is “silver-plated.” Not solid silver; that’s for 25 years. The lesson here is that even though 23 years sounds like a long time, it’s not exactly solid. So we can’t take our love or our lust for granted. We have to keep renewing it, which gets a little trickier as we climb up the silver-plated stairs of longevity, especially in high heels like I wear on this show. But the pleasure, joy and marital longevity dividends make it worth the effort. And being in the center of a big bawdy bacchanal like this makes it easy to stay in lust.

In that sense, we’re like bonobos. Married bonobos. It’s a bit of a contradiction. But it’s worked for us for over 23 years… and we’re shooting for 23 more.

Highlights of the Night

That old stiff Corpsy rises up from the grave to give the first croak—I mean, toast—praising the uniquely thrilling experiences he’s had on DrSuzy.Tv over the years which have made him feel almost alive. He also shamelessly uses the moment to show off his new magazine featuring the “actual corpse” of our recently departed friend Kim Fowley, then throws the magazine—and then himself—into the gorgeous girl pile on our bed.

Murrugun the Mystic and Kiki Dare are newly engaged! And guess where they met? On DrSuzy.Tv! This goes to show, Bonoboville is not *just* a great place to party and get sex-educated; you might meet the love of your life here! It’s so exciting to see another playcouple in love starting out on the road to bonoboësque marriage. We wish them luck! Plus they give us a fabulous leopard-handled flogger and a brown leather belt slapper made by their friend Justin that I try out on Kiki’s delicious derriere. Works great!

New Block Institute celebrity therapist Karen Summer, fresh from being inducted into the XRCO Hall of Fame, provides her “toast” from her magnanimous mammaries. ‘Nuff said.

Special shout-out to another old friend, Lasse Braun, who just passed away a few weeks ago, and whose son Axel Braun, just accepted posthumous induction for his dad into the XRCO Hall of Fame. Side note: On the first day of the new millennium, New Year’s Day 2000, Axel’s skilled fingers in my vagina manipulated my G-Spot as Lasse’s skilled voice in my ear manipulated my mind, and the two of them made me squirt “Holy Water” for the very first time.

Decked out in royal blue rubber, the great Goddess Soma Snakeoil sweeps into the Womb Room with a colorful, corseted entourage and many gifts from her and Fat Mike of NoFX, including swag from their acclaimed new musical “Home Street Home.” Soma’s unique combination of electrifying beauty, maternal warmth, girlish enthusiasm and boundless energy is dizzying. Between gala performances, parties and picking up awards, she has found time to pick up the reigns of publishing the highly respected Domination Directory International (DDI). Speaking of which, I’m super-excited that my article, “The Bonobo Way of Female Power,” excerpted from The Bonobo Way: The Evolution of Peace through Pleasure, will be published (with exclusive photos!) in the next issue of DDI. Don’t miss it!

Sweet and sultry Belle Starr calls in to share the anniversary love. Belle started listening and calling into my radio show back in the 1990s when it was on the air in Lake Charles, Louisiana! Now she’s a popular therapist with the Block Institute! Amazing how we have transformed together.

Capt’n Max tells the touching story of how he “found” me, romantically speaking, through a series of symbolic moments in his life that all seemed to miraculously converge one Xmas Eve in my living room. Everyone loves the story so much, it starts a rash of people telling tales of signposts on the roads to romance in their lives.

Jack the Zipper, who’s known us since 2005, toasts the happy silver-plated couple from the bar. Then he “discovers” the star of his next movie, Deanna Deadly has appeared in some of his movies! Which reminds me, in shiny red latex, she’s looking particularly deadly, in a delightful way.

Lisa Ann Davis, one of the great nude Nymphs of Zorbacchus whose portrait is hanging in our new art gallery, returns to Bonoboville! Since we have not seen Lisa in EIGHT YEARS, it is an emotional reunion, especially when we show her the amazing “Zorthian: Life & Times” film we made in 2005, in which she makes a captivating appearance.

As we toast to our marriage, which happens to be between husband and wife, we also toast to marriages between two (or three) husbands—or wives, as well as “marrying the beach,” as SerenaGaia Anderlini D’Onofrio and a group of her fellow ecosexualists did. Marriage is such a personal commitment. People should be able to marry whomever they love.

Jux Leather, now with his own Kink.com line, gives me a wedding white finger flogger that I immediately put to good use on my flower girls and guests.

Aaliyah Corsets gets flogged and spanked by Dark Phoenix’s roaring fire AND rides the Mad X Bike in the after-party.

Dr. Mars having missed out on Bonoboville Communion in his earlier visits, takes it from (at least) eight freed nipples. He certainly freed his inner bonobo.

We do an interesting pre-show interview with George Stiehl, a journalist for Citizen LA. Subjects include marriage, sexual health, sexual attitudes around the world, the Bonobo Way and our pioneering efforts in the wonderful world of human sexuality. We also talk about police brutality and criminality, how they’ve been with us for a long time, but now with all the citizen camera phone recordings and news chopper videos going viral every day, with more and more crazy and horrific examples, we are finally seeing the reality unfiltered. Hopefully, it will shock enough of us into action so that we will, in turn, shame the police forces, sheriffs’ departments, government agencies and religious police around the world into changing their ways… maybe even to the Bonobo Way. Though it’s too soon to celebrate the end of police abuse, the signs look promising!

A totally naked Chelsea Raw assumes the sacred role of the Goddess Venus Cannabis, spreading her legs and labia for Goddess Soma and I to smoke from the pussy pipe in the after-party.

Capt’n Max dry-humps my silver-plated buns as he grabs the handles of my Munkey-Barz, steering me like a small yacht around the grounds, until it’s time for even happier humping in the marriage bed. Love you, Capt’n Max!

And there’s so much more… all to be posted soon on DrSuzy.Tv. In the meantime, don’t miss next Saturday for a sure-to-be enlightening interview with amazing anchorwoman, former host of “Breaking the Set,” passionate peace activist and artist Abby Martin!