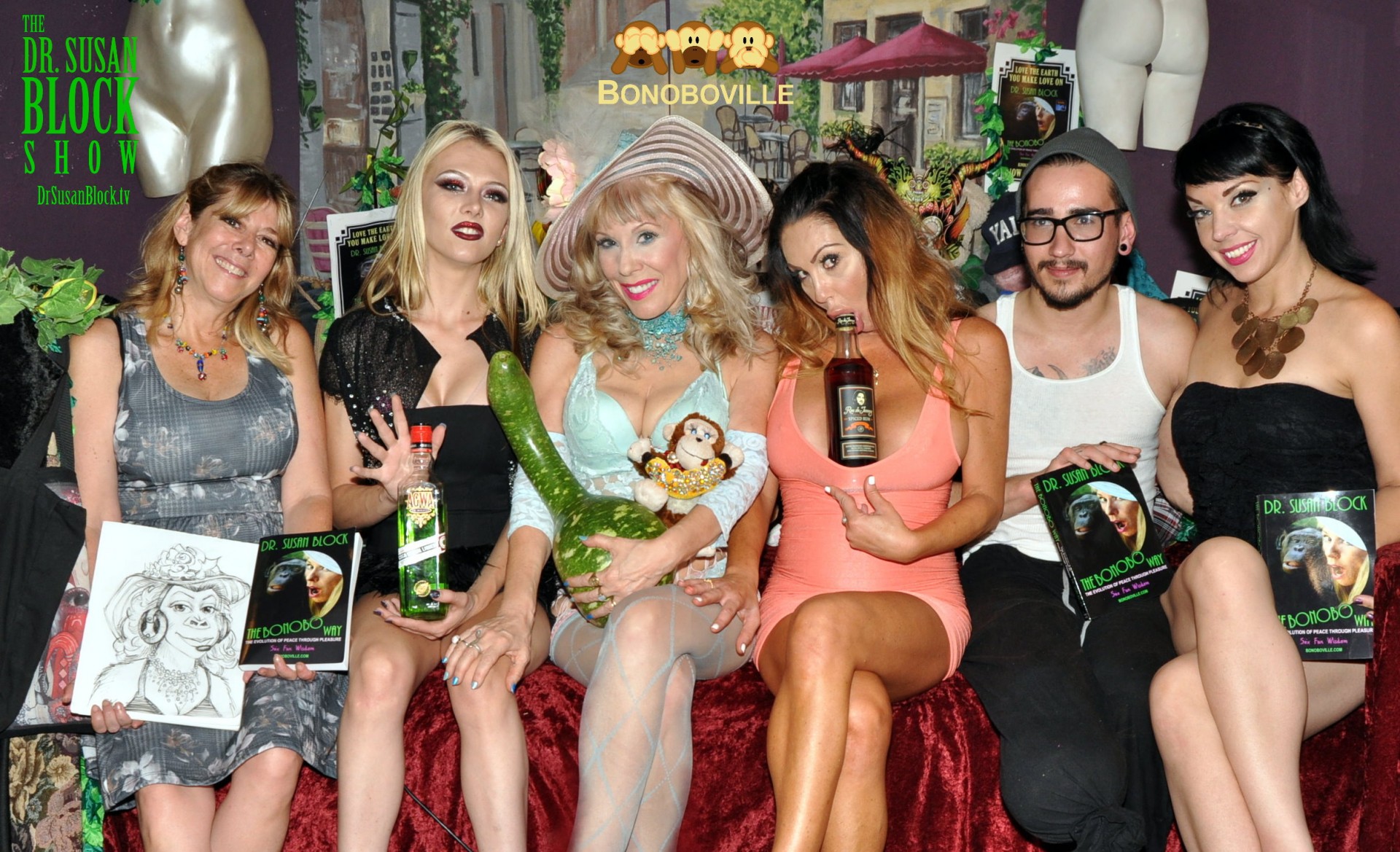 It’s the cusp of the Fall Equinox, but it still feels like the Bonobo Summer of Love here in the Womb Room, and oh my goddesses, is it hot… in more ways than one. My first featured guest is Jeanie Marie, adult star, budding film director and Jack the Zipper protégé. Decked out for her first trip to Bonoboville, Jeanie takes the stage in shiny black patent Christian Louboutin peep-toe stiletto high heels with signature red-lacquered bottoms, a little black couture dress trimmed in glamorous ostrich feathers and artfully applied crimson glitter lipstick with matching eye shadow, plus more sparkles spangling her high cheekbones.

More than a fashion plate, Jeanie’s artistic passion is to create films that convey the beauty of female sexuality, and we give her one of our telltale white envelopes containing a secret award from the Bonobo Way Female Empowerment Outreach Project, made possible in this auspicious Year of the Bonobo by an anonymous Bonobo Way reader and philanthropist. 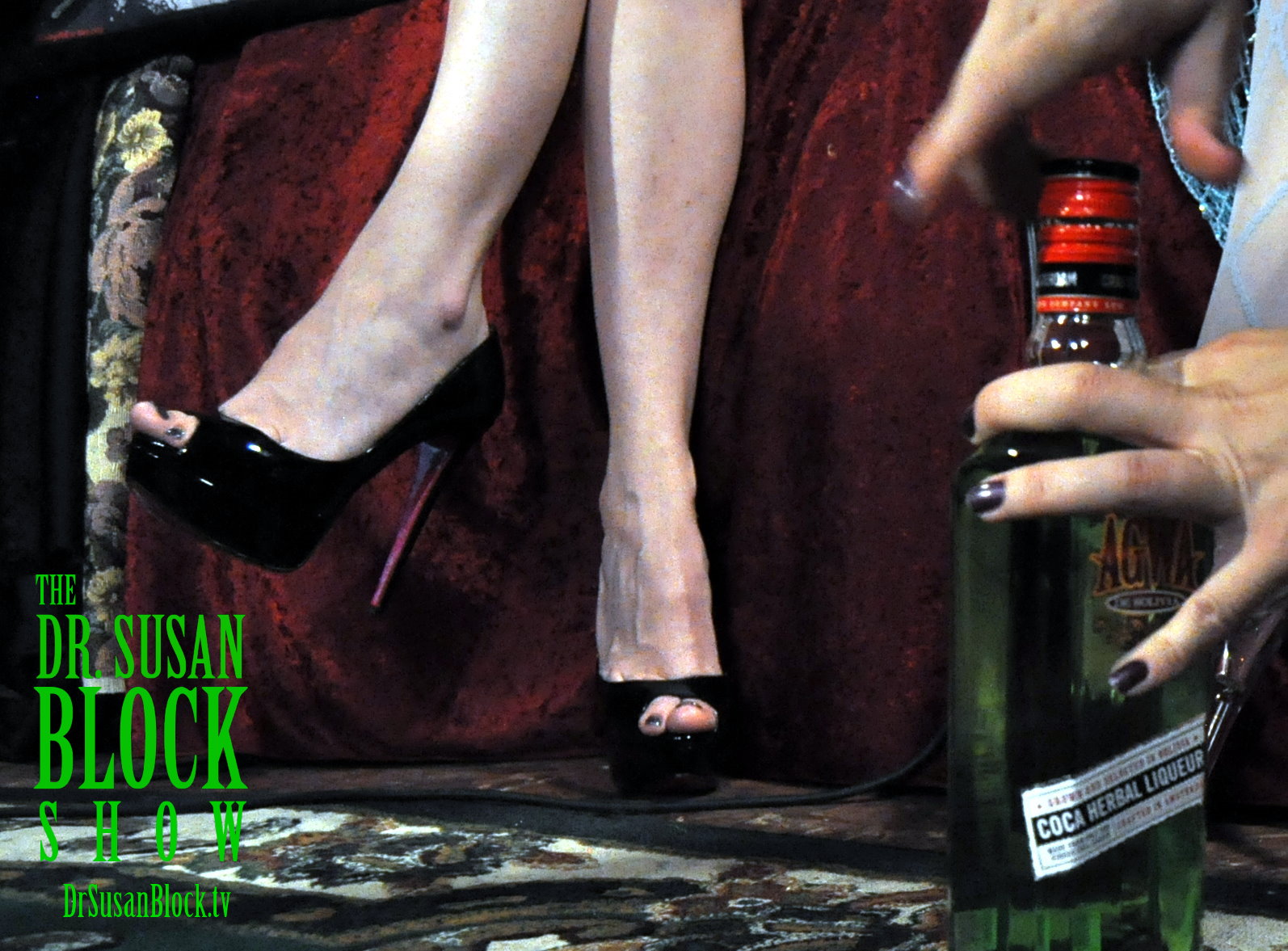 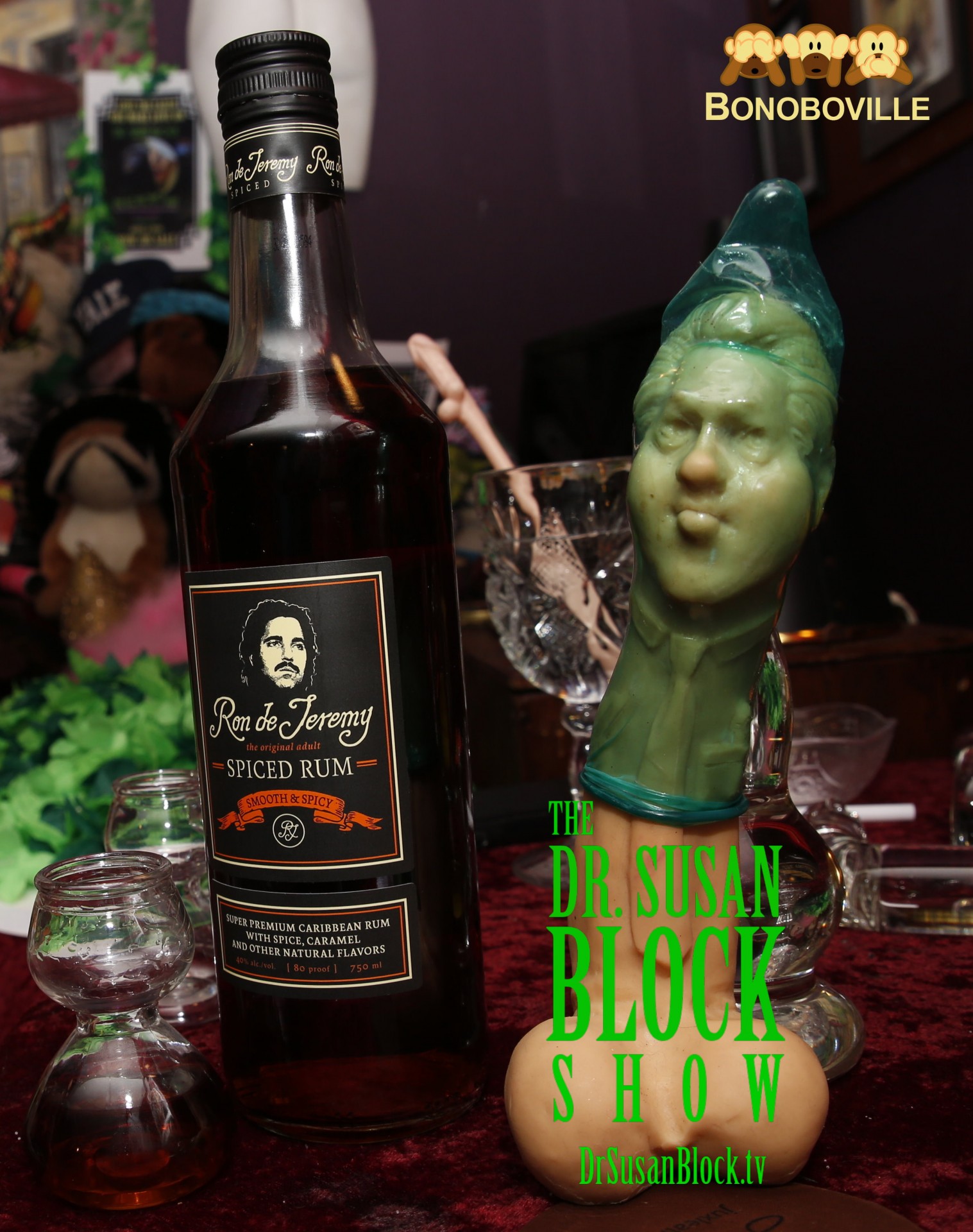 This is a very special Bonoboville Communion, as our cups overfloweth, and so doth our shot glasses, since both Agwa de Bolivia Coca Leaf Liqueur and Ron de Jeremy rum delivered bottles of their delicious elixirs to the Villa Bonobo just the day before the show. So it’s a full Open Bar with the best rum and herbal liqueur in the land! 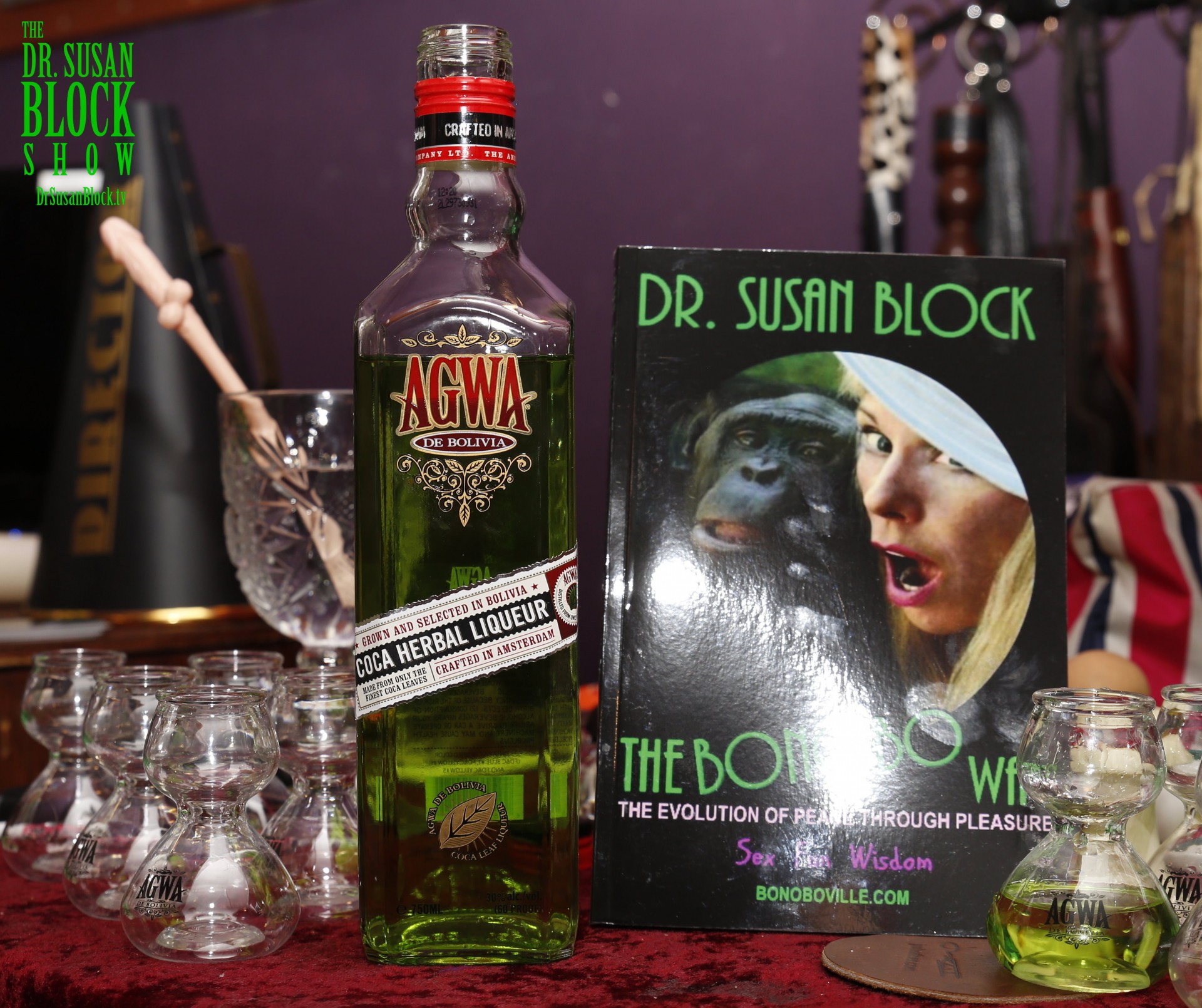 Speaking of which, our beloved bartender is back from Texas, and we welcome home Handsome Hollywood Jake. Another award recipient, the talented artist Helane, author of A Drawing a Day, here with our bitcoin buddy Joseph, gives and receives Communion with her lovely, large naturals and, while in the studio audience, draws an extraordinary cartoon of me as a bonobo. Wild! 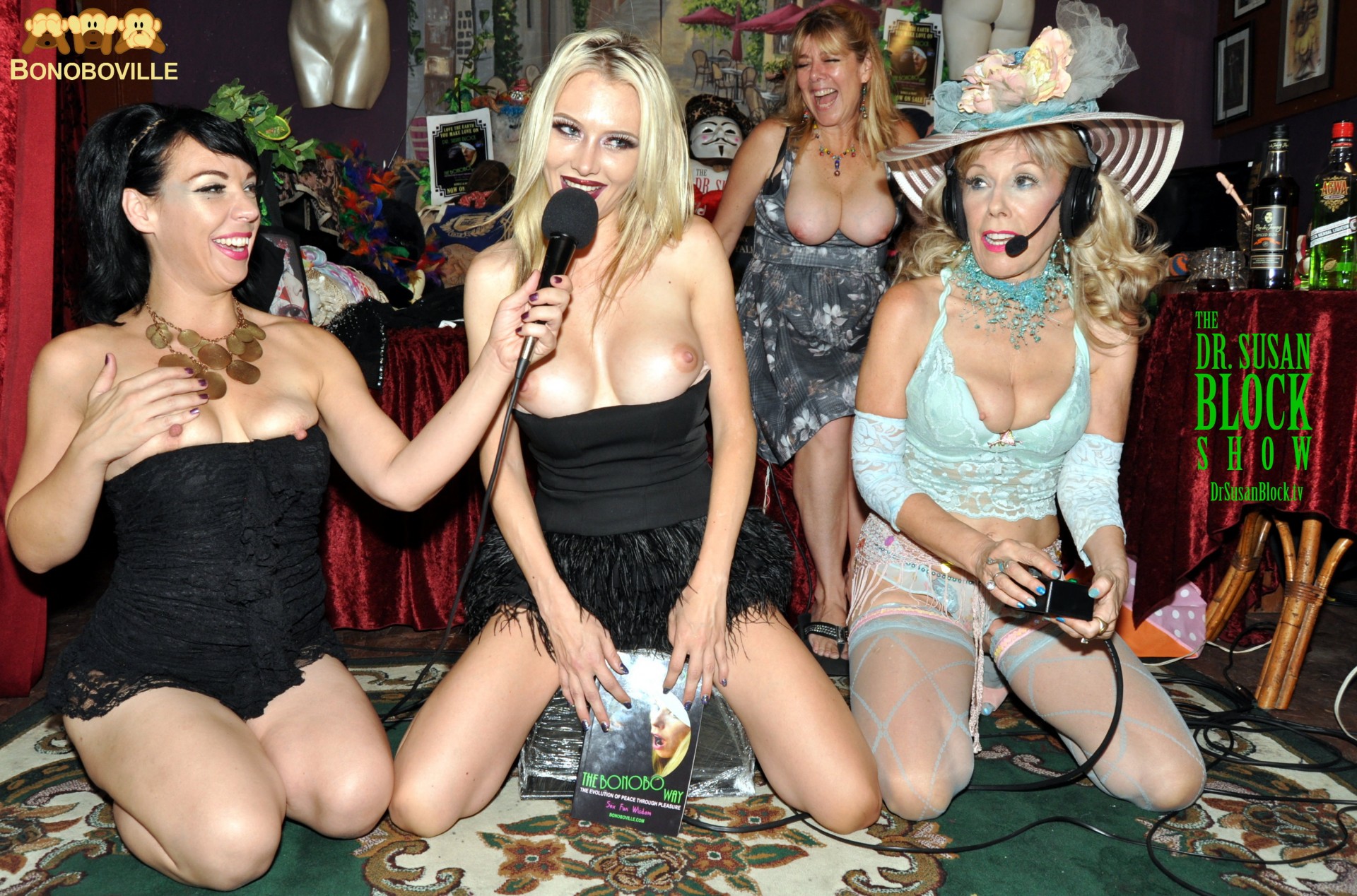 Jeanie Marie rides the Sybian in her Louboutins! Photo: RingoShotYou

From Louboutins to Communion, and now onto the Sybian, Jeanie goes on a wild ride. Just as she breaks into orgasm, in skips another Bonobo Way Female Empowerment award recipient, the delightfully daffy Dayton Rains, bringing gifts, including a handmade bonobo doll with a glittery banana. She also brings her pal James Dickson, an amiable young man with an extremely cheerful demeanor, especially considering he recently lost the lower half of his right leg in a motorcycle accident. That doesn’t stop him from taking Bonoboville Communion from Dayton’s massive boobs nor offering up his third leg as an altar for Dayton to suck her Communion. Houston, we have penis! 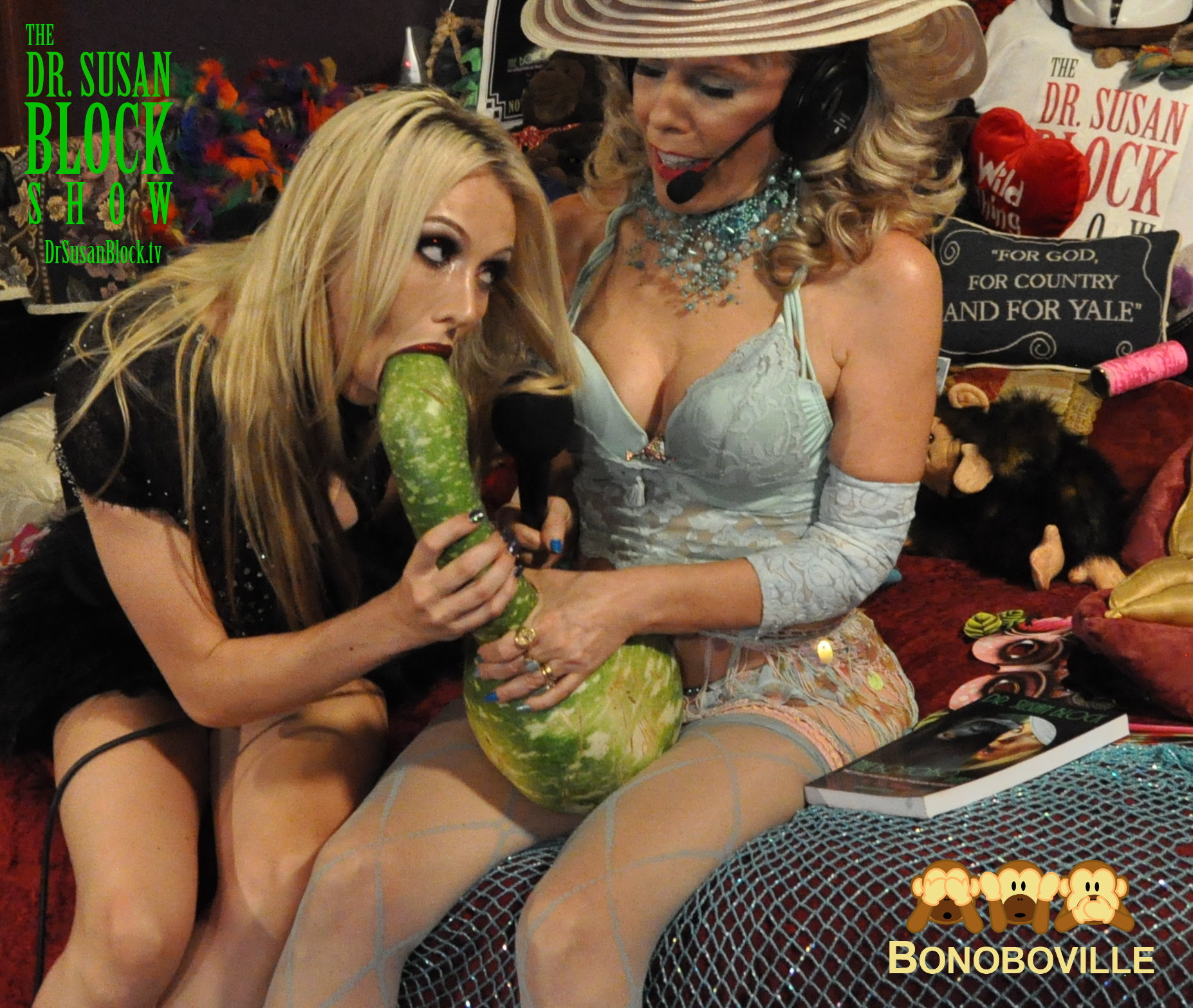 Speaking of penises, despite the summery weather, we do have a new autumnal gourd that is shaped remarkably like one. From some angles, it actually looks like a jolly green brontosaurus. But mostly, it resembles a giant phallus the color of the outside of a watermelon with extremely engorged balls, and it appears to be genetically engineered, though stranger fruit have appeared in nature. The stem looks a bit like a spurt of prehistoric green ejaculate petrified mid-spurt. That stem makes it difficult to suck, so Jake cuts it off, which provokes unnerving comparisons to circumcision, but it does give it a nice smooth head to the thing, which the ladies appreciate, as they take turns sucking my gourd, as well as each other’s nipples, the Bill Clinton dildo (covered by a green Glyde America cruelty-free, all-vegan condom) and James’ happy Dick(son). 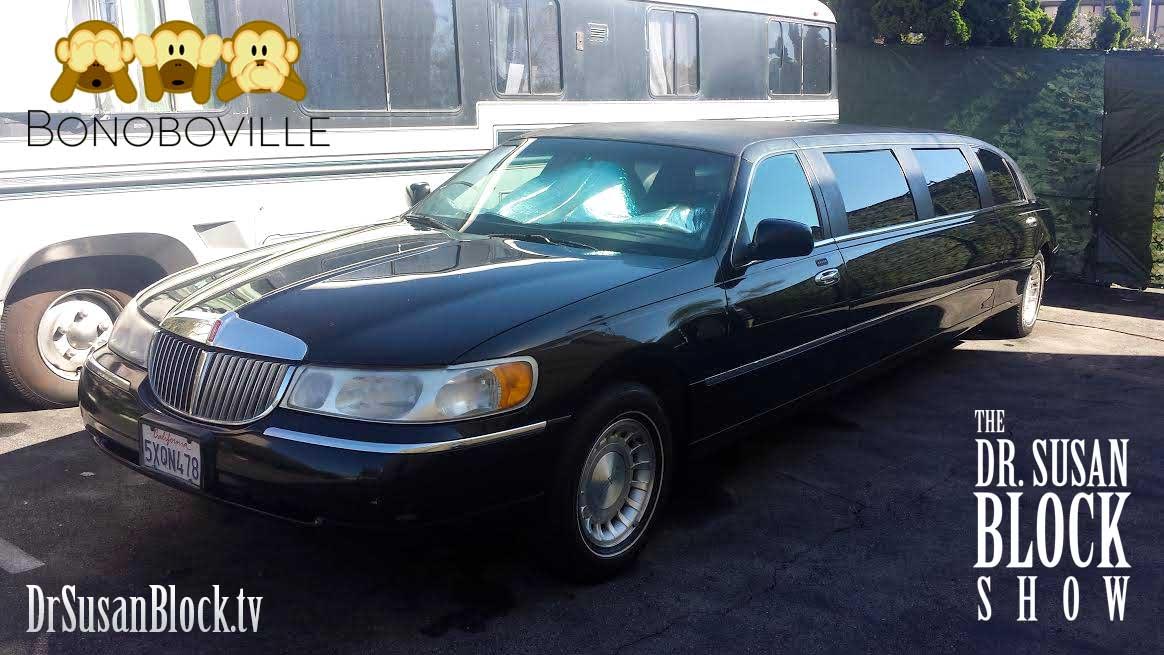 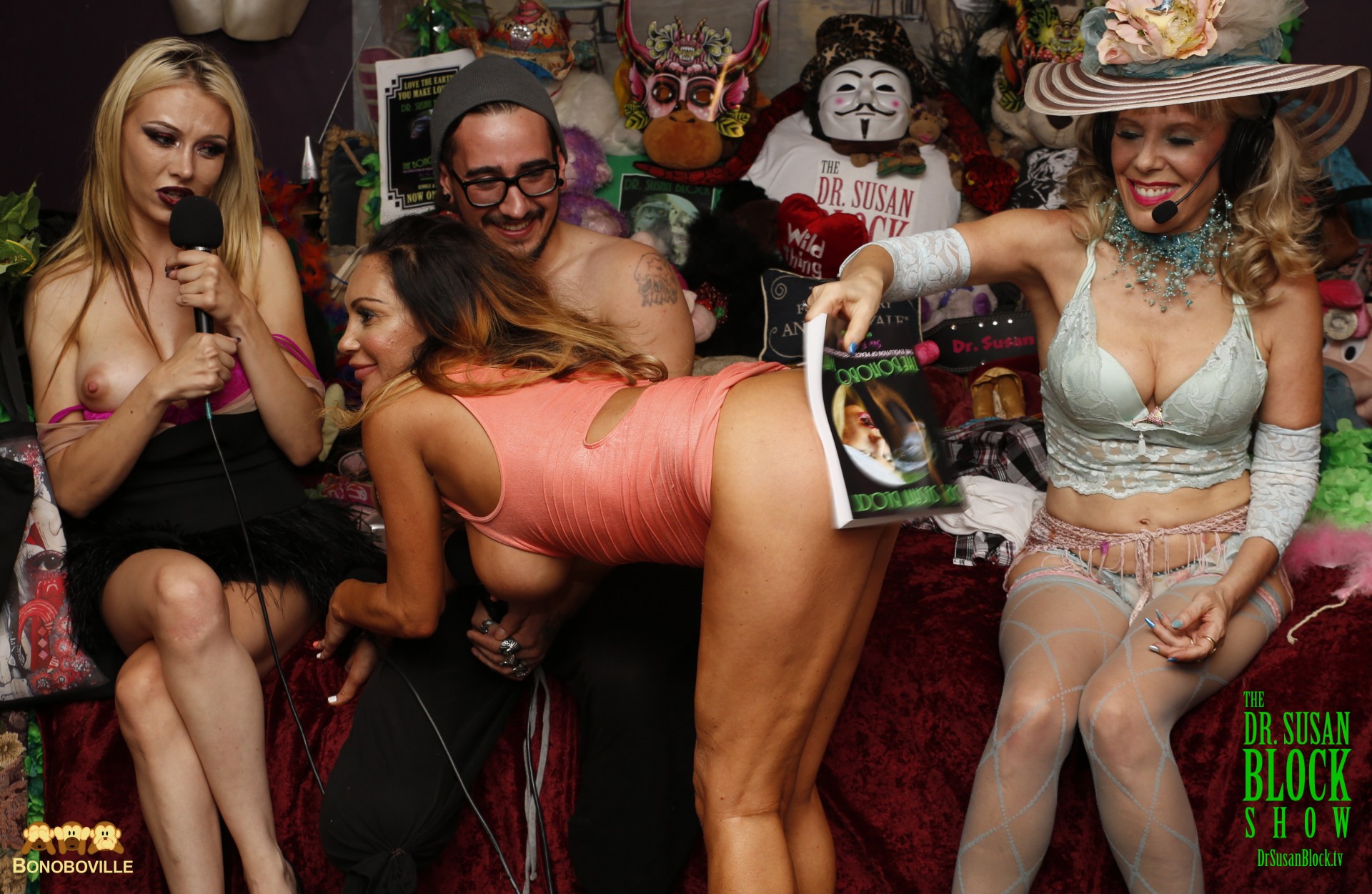 Shout-out to Institute therapist Chelsea Demoiselle, up in the woods where limos can’t go, plus a Bonobo Way book-spanking for Dayton’s tardiness. 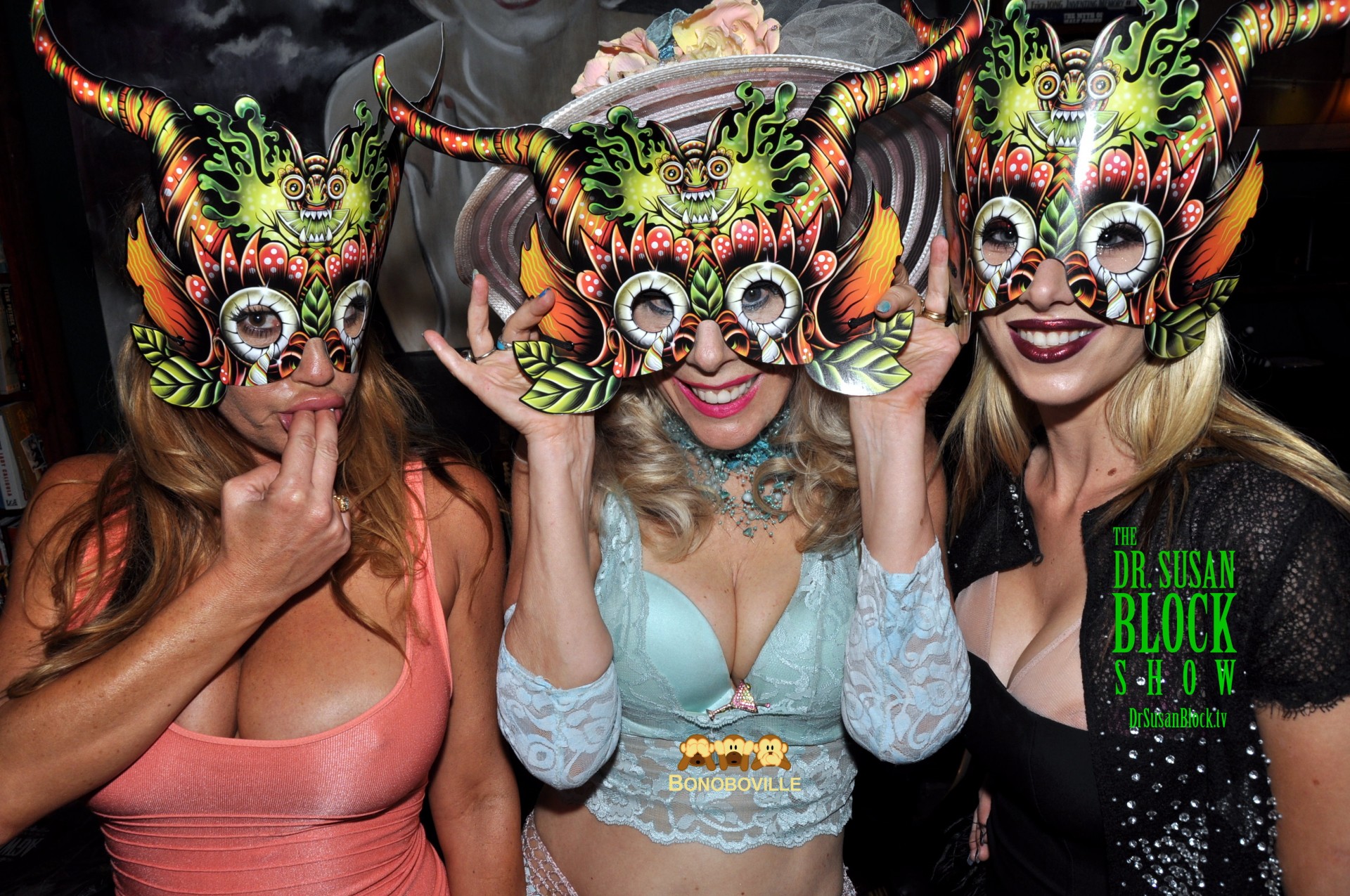 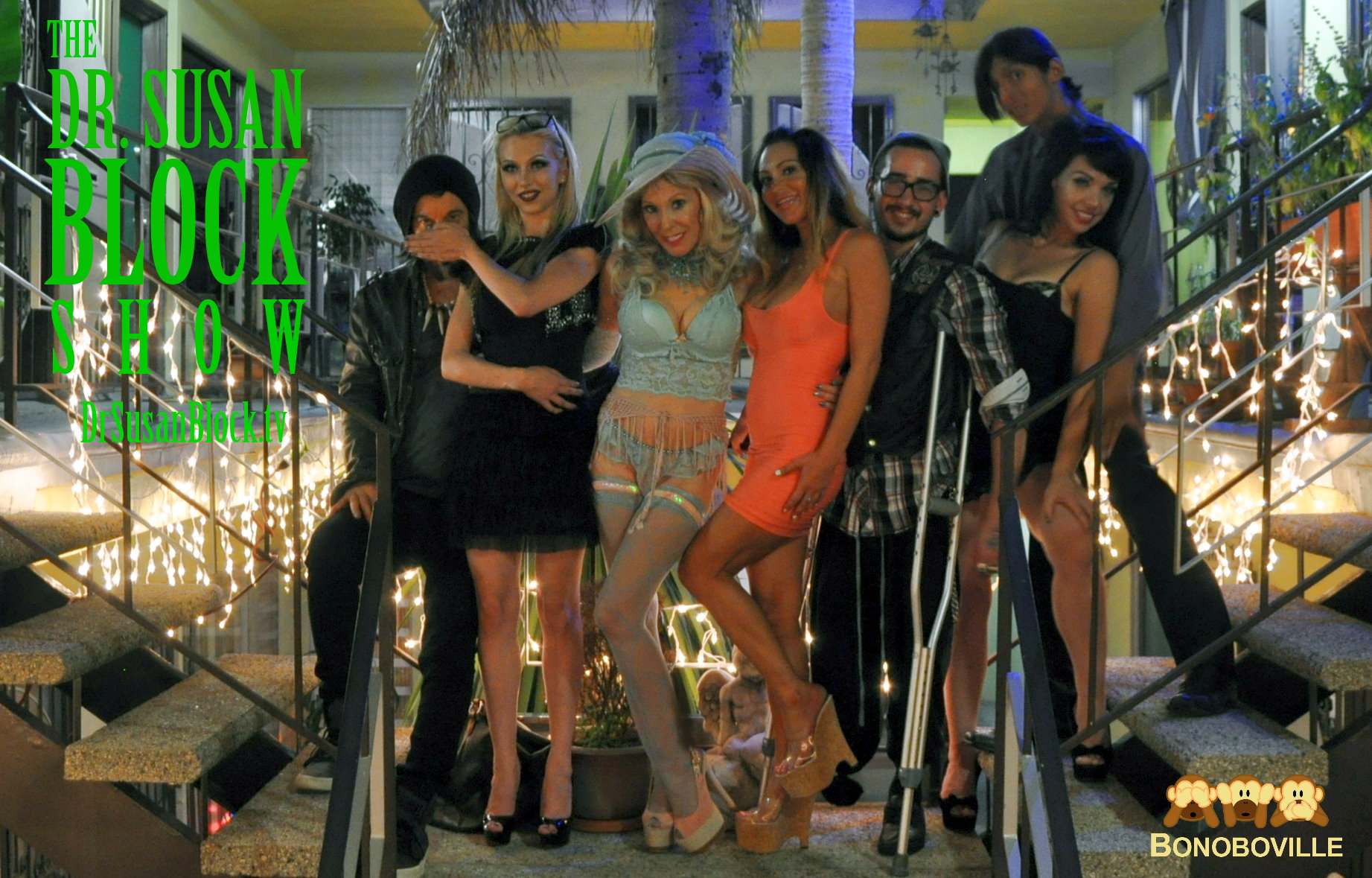 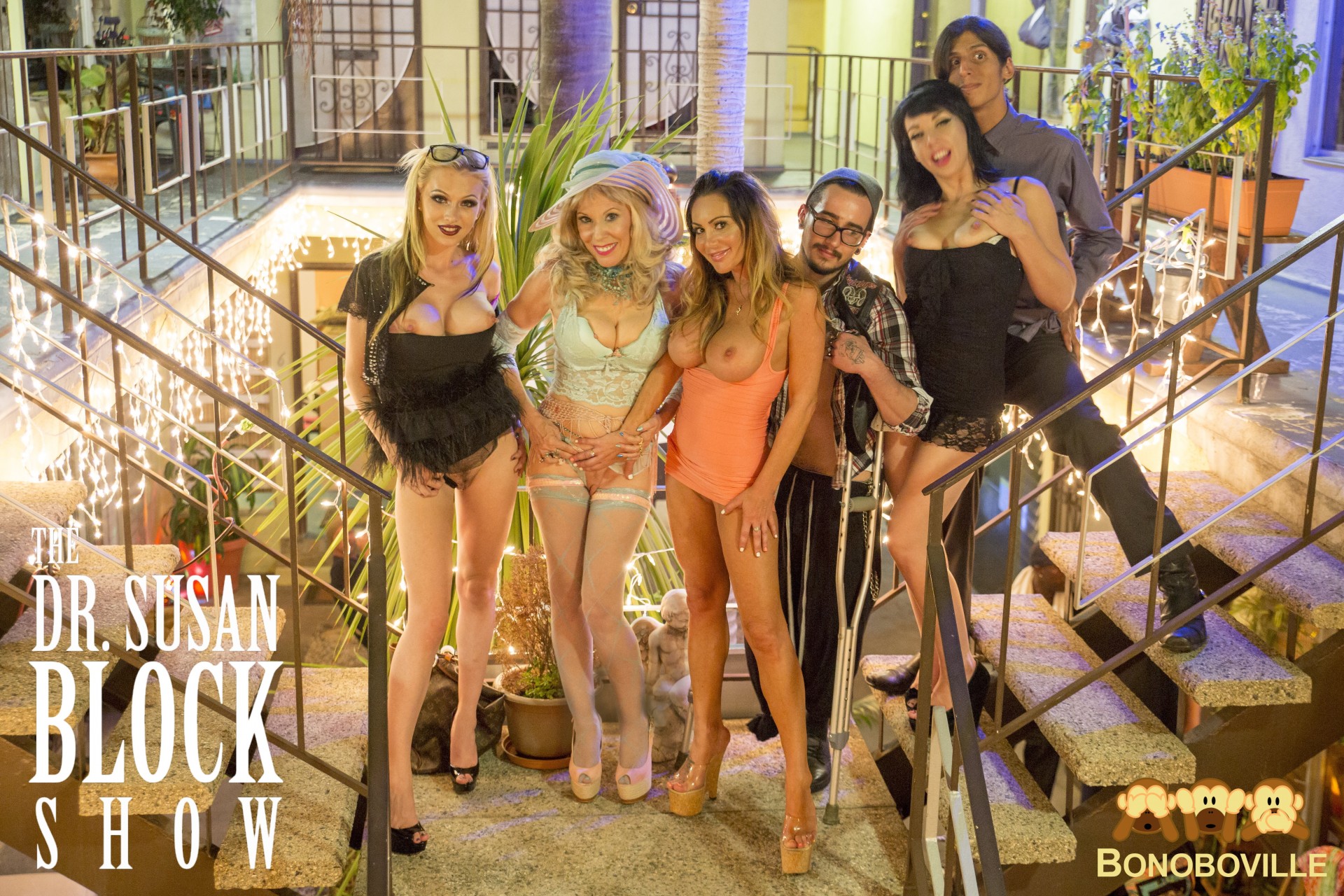