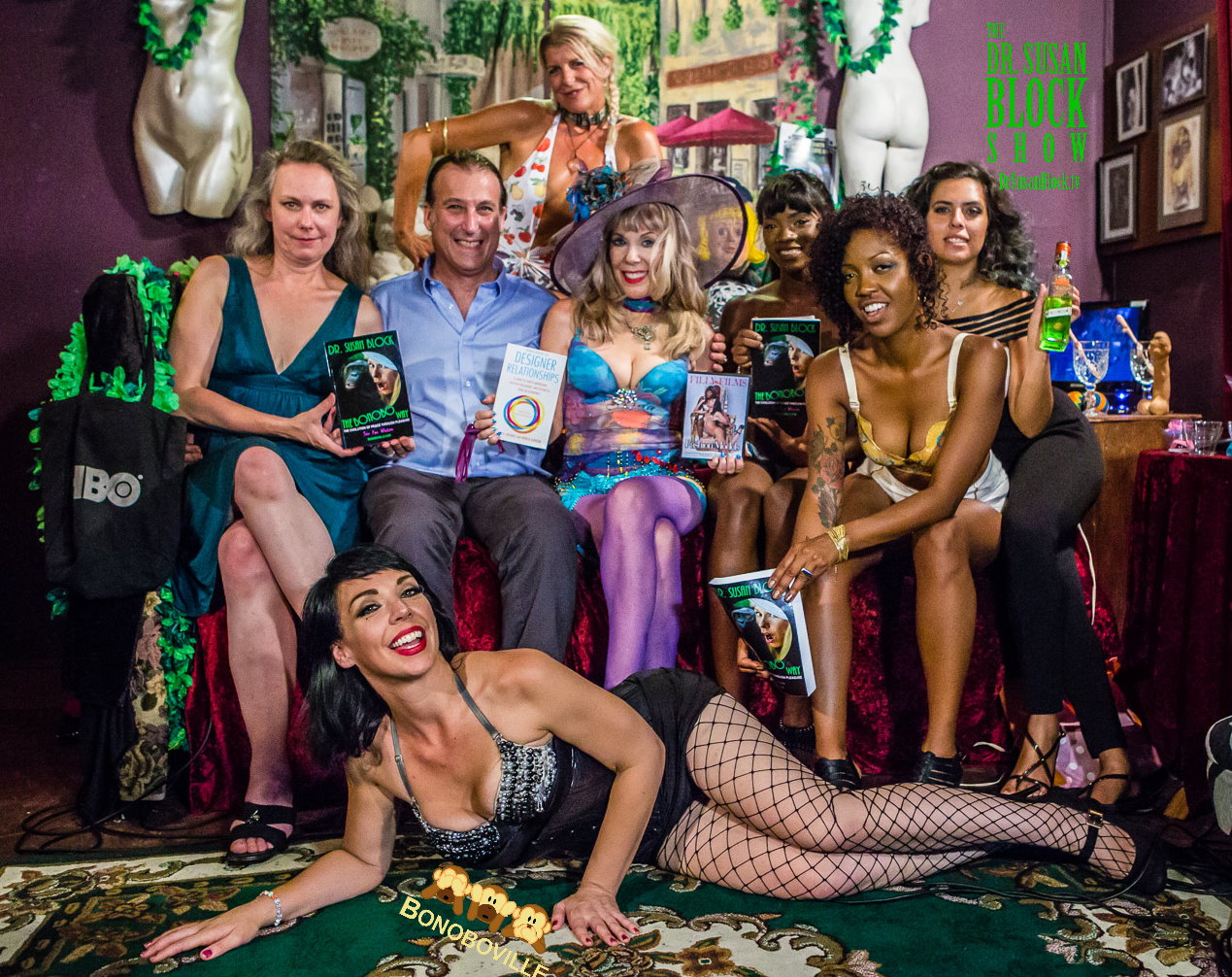 How can you enjoy a good book? Let me count the ways… You can read it, study its poetry or prose, savor its style, explore its meaning, laugh at its jokes, learn from its lessons, put it in a library, discuss it with fellow readers, lend it out to friends, sell it, review it on Amazon, tweet about it, give it as a gift, drop it like a bomb (“shock & awe” with no casualties) or… you could use a book as a spanking paddle to whack a birthday girl’s bottom into a brand spanking new year of life on Earth which also happens to be a spanking new start to the Jewish new year, a.k.a. “Rosh Hashanah.” And Amen and Awomen to all that.

You’ve heard of “Masters & Johnson.” Well, my first guests up on the broadcast bed are “Michaels & Johnson,” a.k.a., Mark A. Michaels & Patricia Johnson, another couple devoted to the study of sex and each other, and their newest book is Designer Relationships (published by our lovely, literate friends at Cleis Press). We spend the first part of this show discussing their comprehensive “Guide to Happy Monogamy, Positive Polyamory and Optimistic Open Relationships.” If you want to make sense of the new world of “designer relationships” (a term coined by Dr. Ken Haslam, founder of the Polyamory collection at the Kinsey Institute, who also endorsed and wrote the foreword to Michaels & Johnson’s book), or if you’d just like to “design” your own relationship(s), this book is for you. 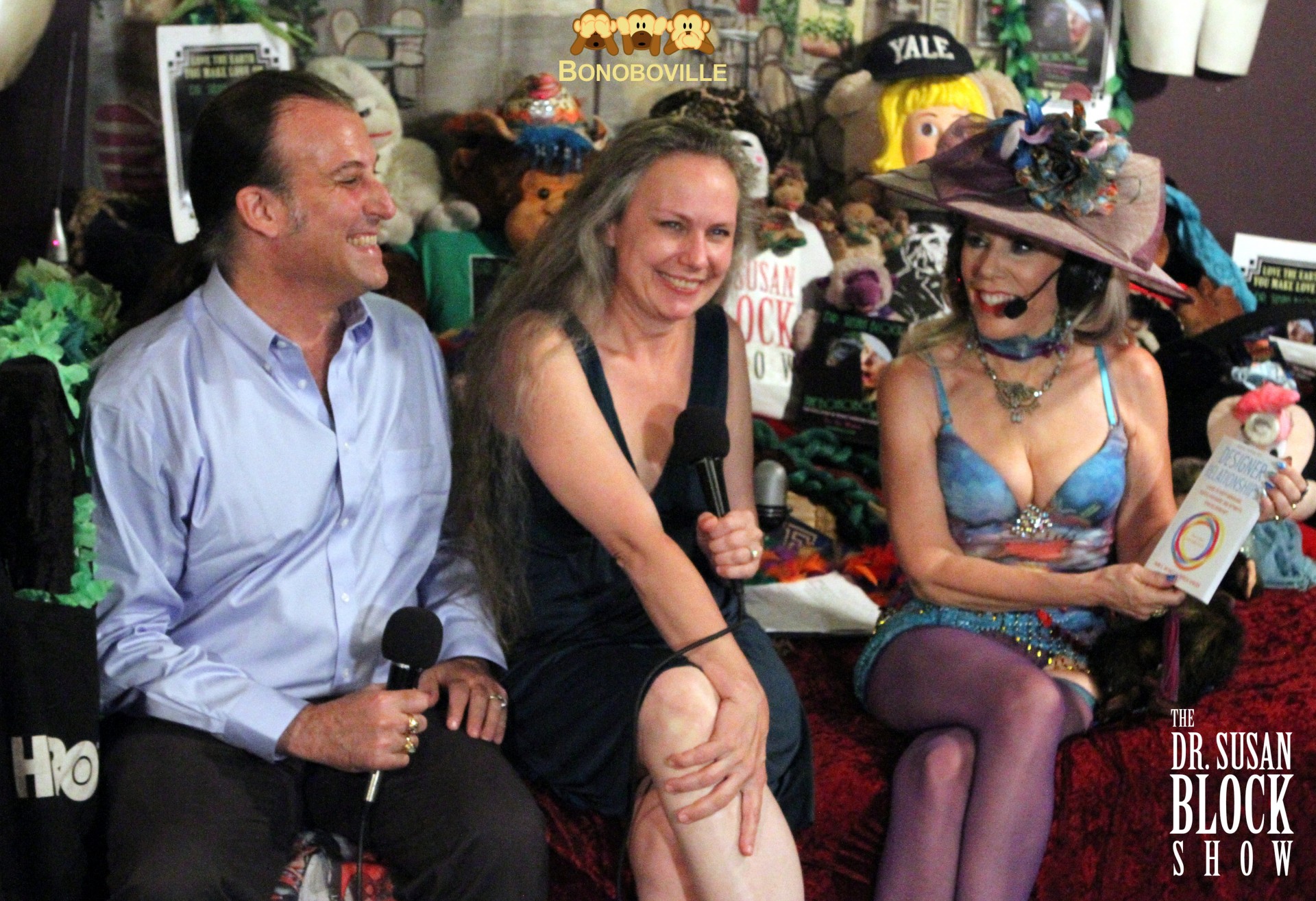 Mark, a fellow Yalie (M.A. in American Studies) whom I first connected with during Sex Week at Yale in 2010, met Patricia, a soulful animal-lover from Missouri, when she was a student in his Tantra class. Study gave way to practice as they fell in love and found themselves “designing” their own “pair-bonded nonmonogamous” relationship which apparently works for them as they have been together more than 16 years. Combining communication and adventure—mixing trust with lust—and practicing what they preach is key to their own designer relationship success. One adventure they share is just being on the DrSuzy.Tv show, an experience that some of their more timid sexpert colleagues seem to find scarier than riding a bareback bucking bronco. They even share Bonoboville Communion (more on that in a minute)… 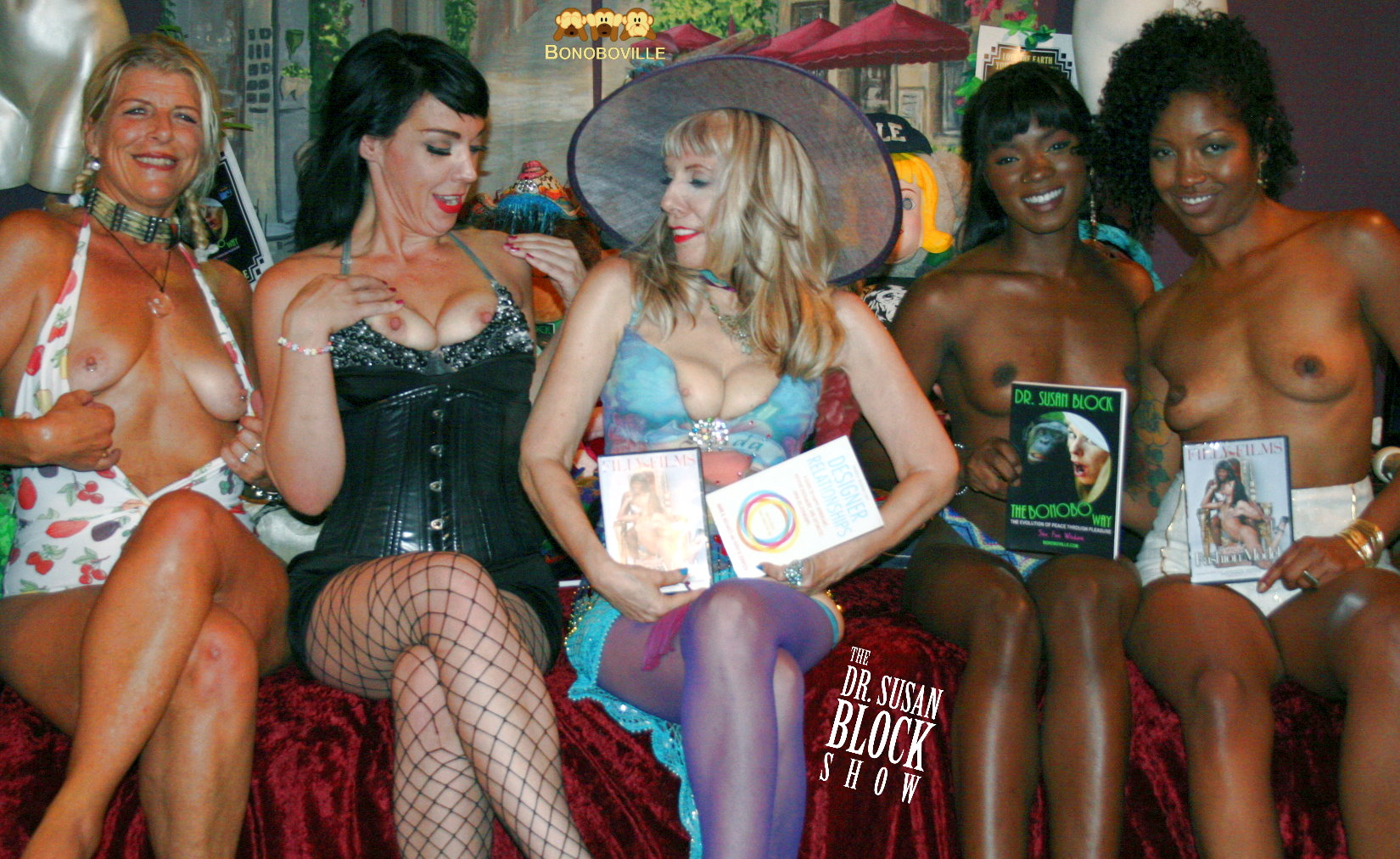 Luzer is accompanied by the incorrigibly adorable Yenta with whom he appears to have an interspecies “designer relationship” of the kind that many people have with their pets. Aptly named, Yenta is a matchmaking magnet for hot gals that her devoted human, 2014 SUZY Award winner for “Best Pick-Up Artist,” can then pick up. 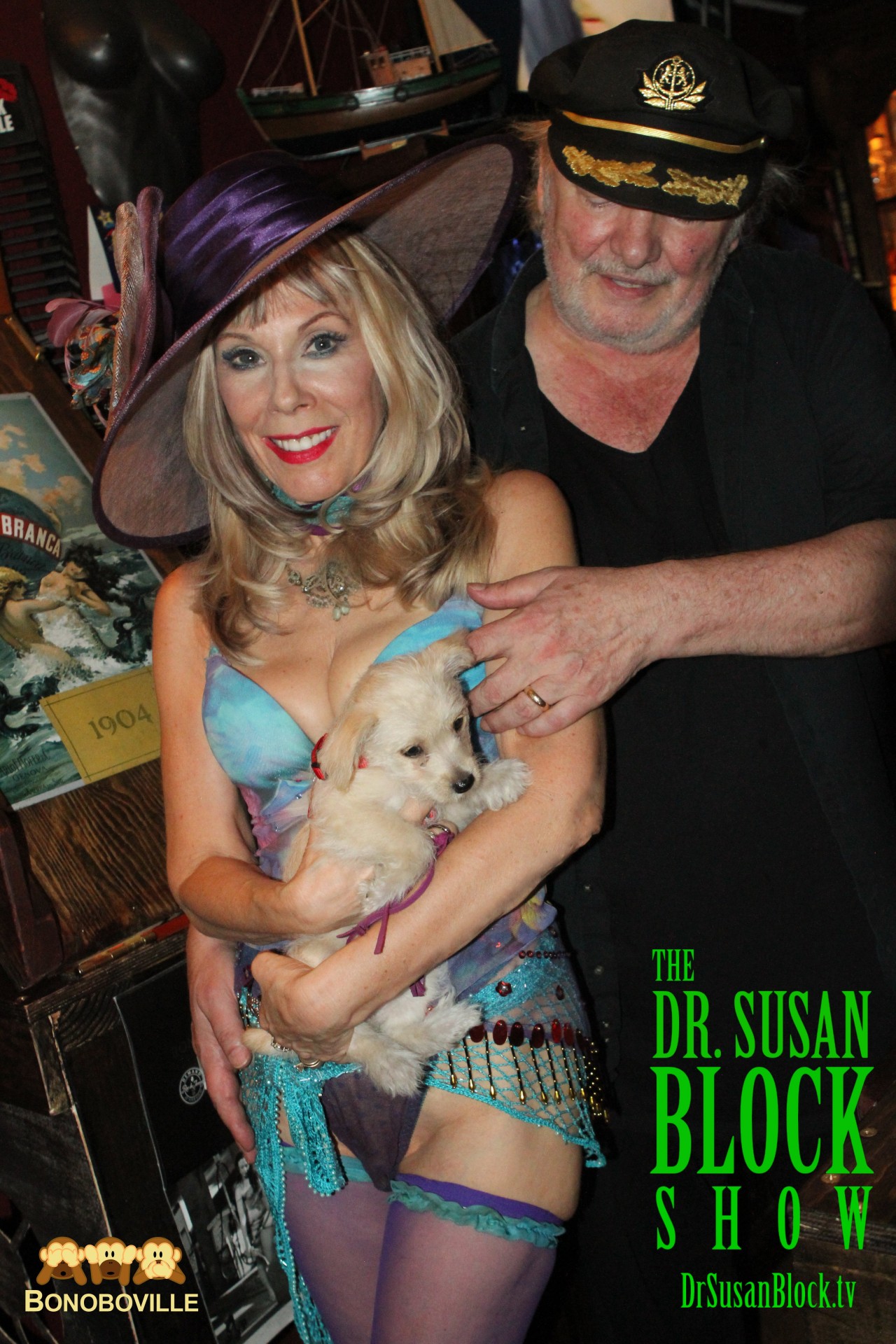 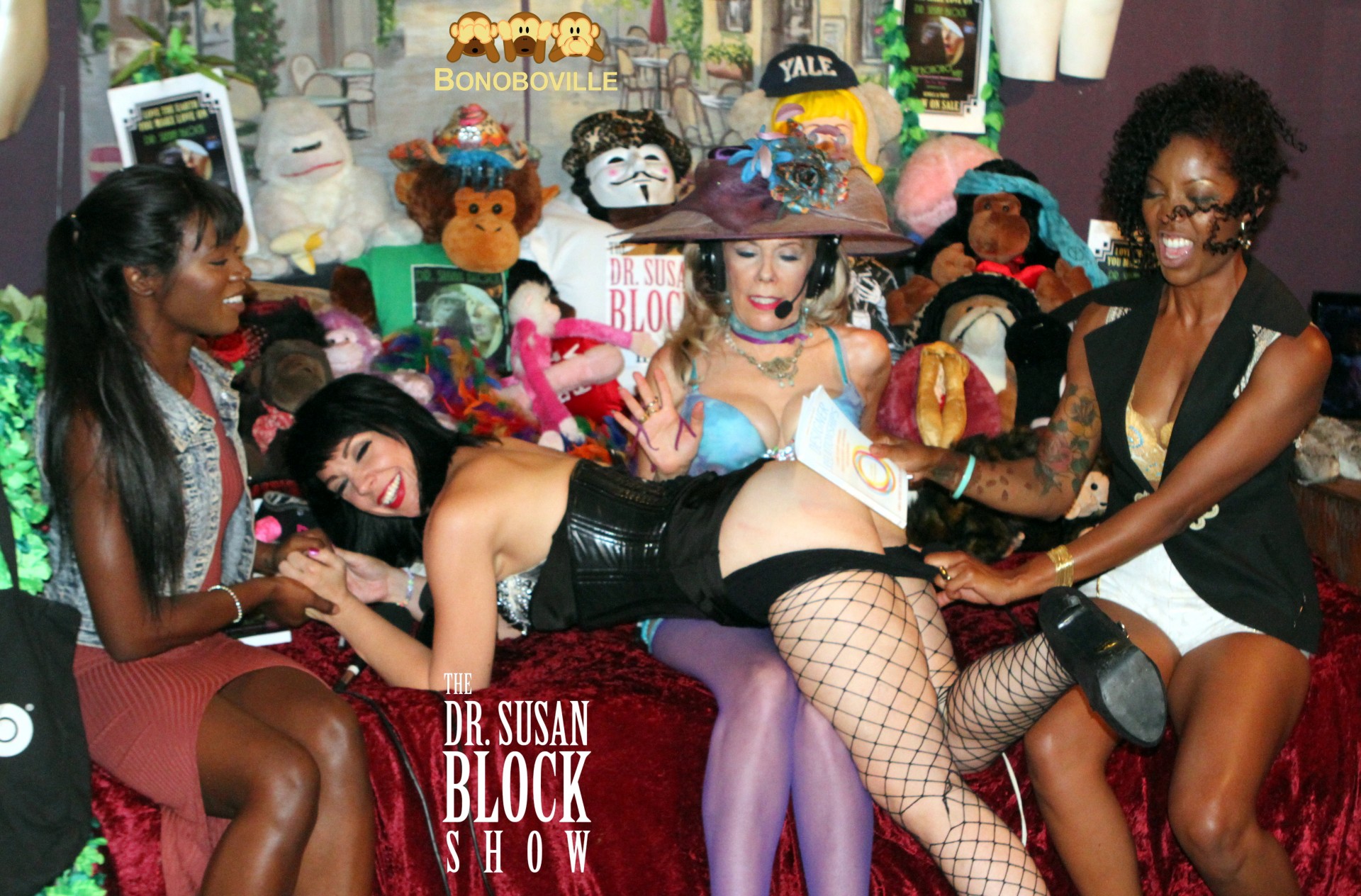 First book-spanking of the night, and it’s OTK all the way; well, actually, we put Biz over all of our knees: Ana’s, Lotus’ and mine. We start “mild” with Michaels and Johnson’s Designer Relationships, a relatively small, lightweight book that makes a great primer—in more ways than one. It can prime your mind for free love, and it certainly primes Biz’s butt, as Lotus swats it with libertine flair to a rosy pink hue. After a little chinchilla-gloved after-care, we get “wild,” with a bigger harder book, her personally autographed copy of The Bonobo Way. We would have graduated to the Wiley-Blackwell International Human Sexuality Encyclopedia (for which I happen to have written the entry on “spanking”), but those three weighty tomes are in the Bonoboville Library. Instead, we move on to hot hand-spanking with a little JuxLeather finger-flogging thrown in for fun and sting-ability.

This calls for a big chocolate birthday cake, brought in with panache by Institute therapist Chelsea Demoiselle, and a lusty, salty round of Bonoboville Communion with Agwa Coca Leaf Liqueur for Rosh Hashana. 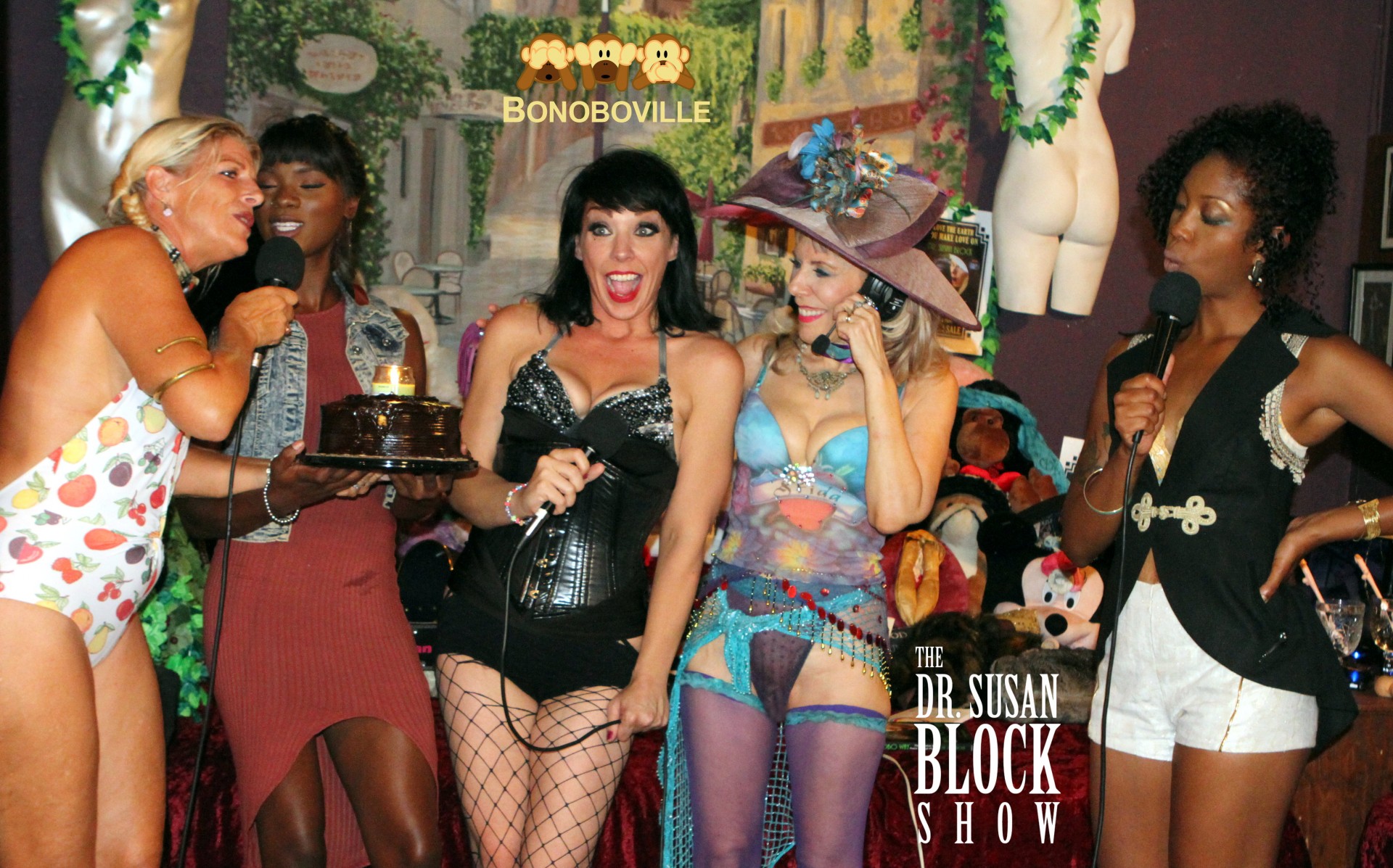 Of course, any body part is good for the licking, but all the Filly girls go for the boobies which on this night, are gloriously natural. #FreetheNipple! It feels good on a hot night. 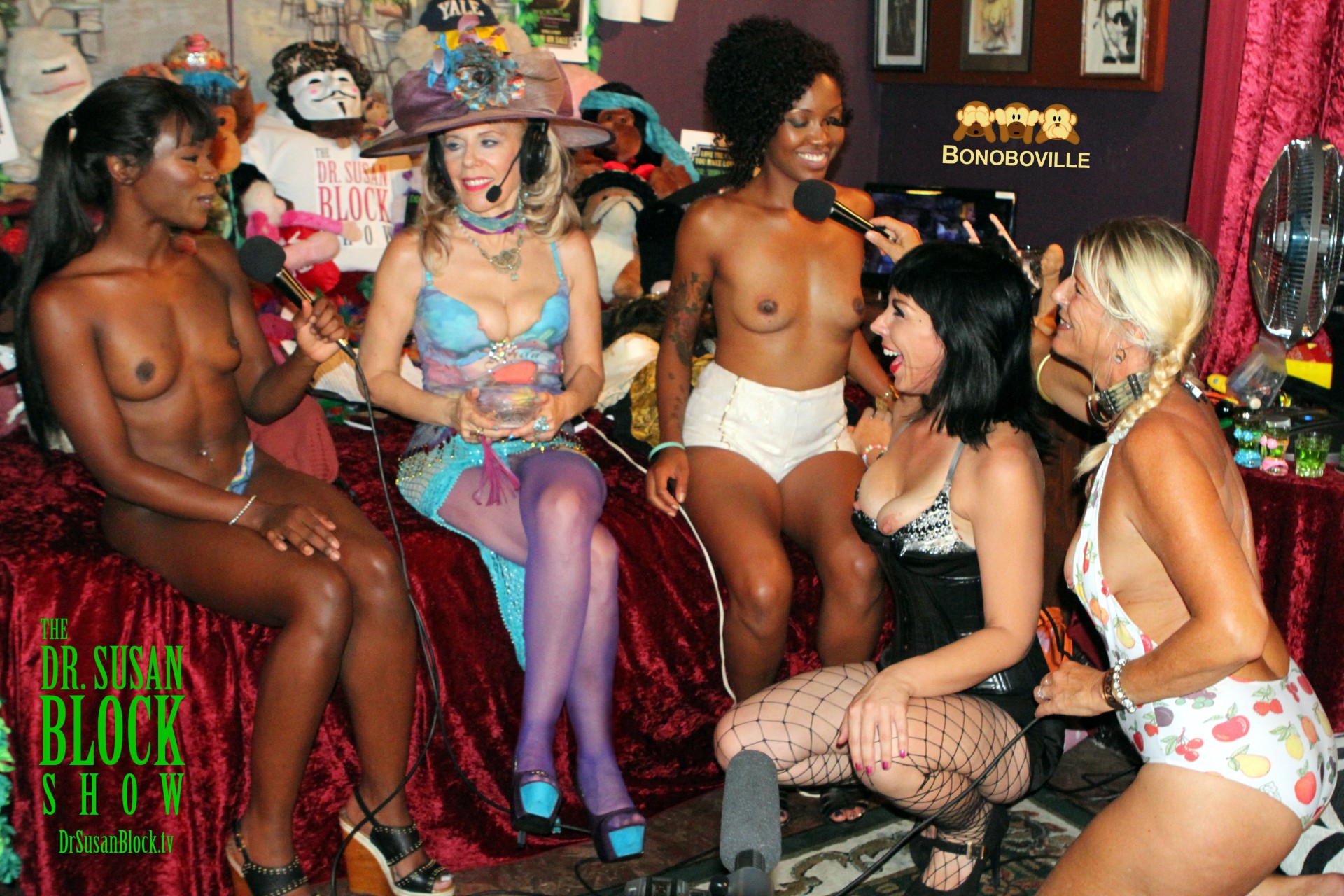 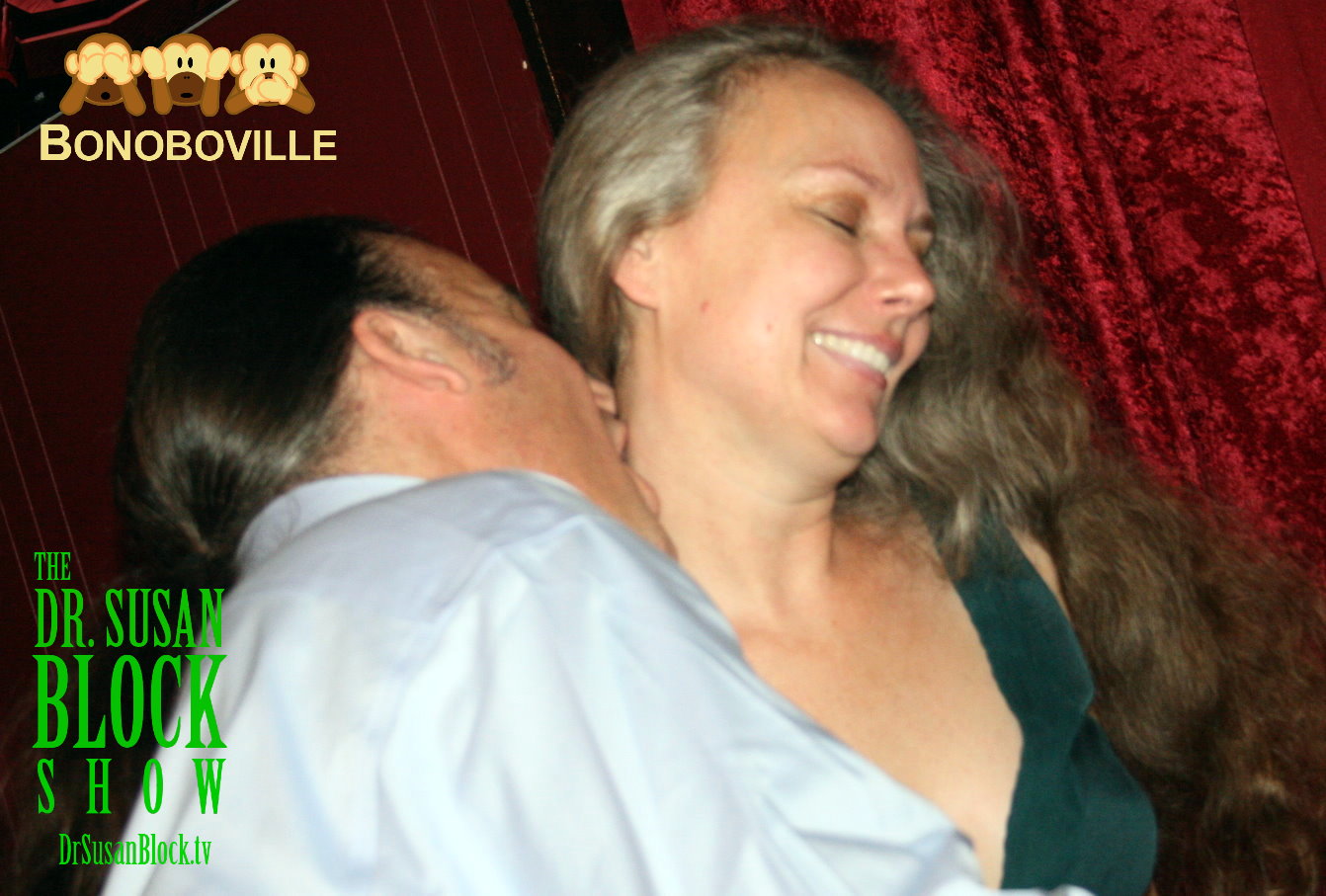 The Bonobo Way on Playboy & at the Emmys

Which brings me back to Friday, September 11th, when I went out on a mission of peace-through-pleasure in a rare daytime venture outside of the Garden of Bonoboville and into the hellish heat and torpor of LA traffic. But it was a double play day for The Bonobo Way, the paperback of which I carried in my stylish Abby Martin art bag. First stop: the Burbank Marriot where I had a great bonobo convo on Playboy Radio with fabulous Swingtime hosts Holli & Michael Pockets; bonobos being the quintessential “swingers,” swinging through the trees as well as with each other. Then whaddaya know, but on my way in and out of the Playboy interview, who do I run into but Good Vibrations founder Joani Blank, Miyoko, Dr. Hernando Chaves, Ashley Manta, Reid Mihalko and a beautiful bonoboësque young “sex geek” named Valerie Baber. 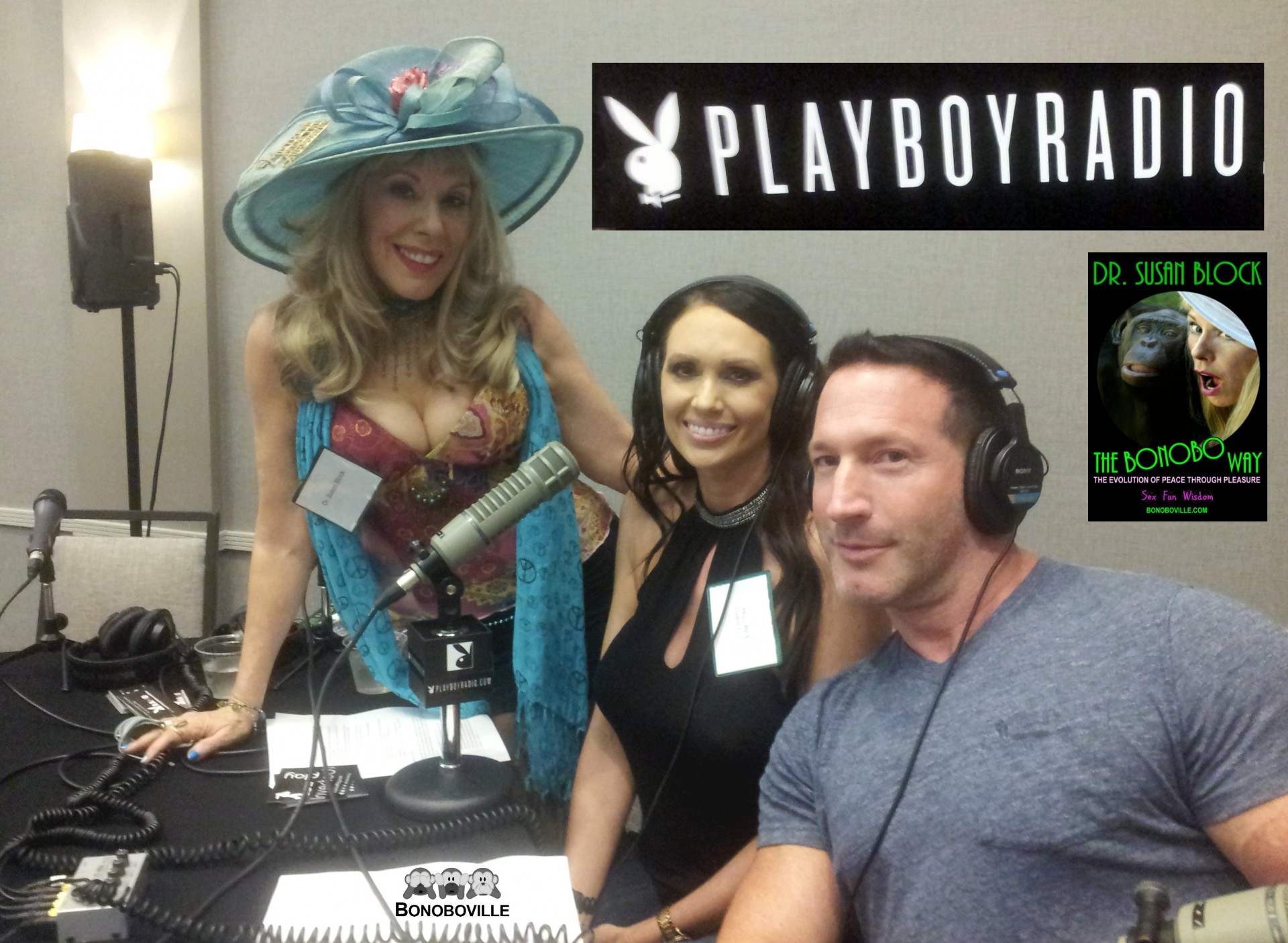 Then it’s back on the road again for part two of our double play day where I meet Capt’n Max for our annual Academy of Television Arts & Sciences’ Documentary and Reality Programming Nominees’ Emmys Party. This is the first year that this high-powered gathering of Hollywood’s non-fiction best and brightest wasn’t held in the Academy’s spacious and comfortable home turf in NoHo (currently being rebuilt). Instead we had to squeeze into the Starlight Room of Mr. C’s in Beverly Hills which has a terrific view, but just four couches and no chairs (though the bar downstairs has great Eames knock-offs). The silver lining of adversity is that it often leads to revolutionary acts, and by the end of the evening, half the people in the place had just plopped down on the floor, some in deliciously incongruous evening attire. 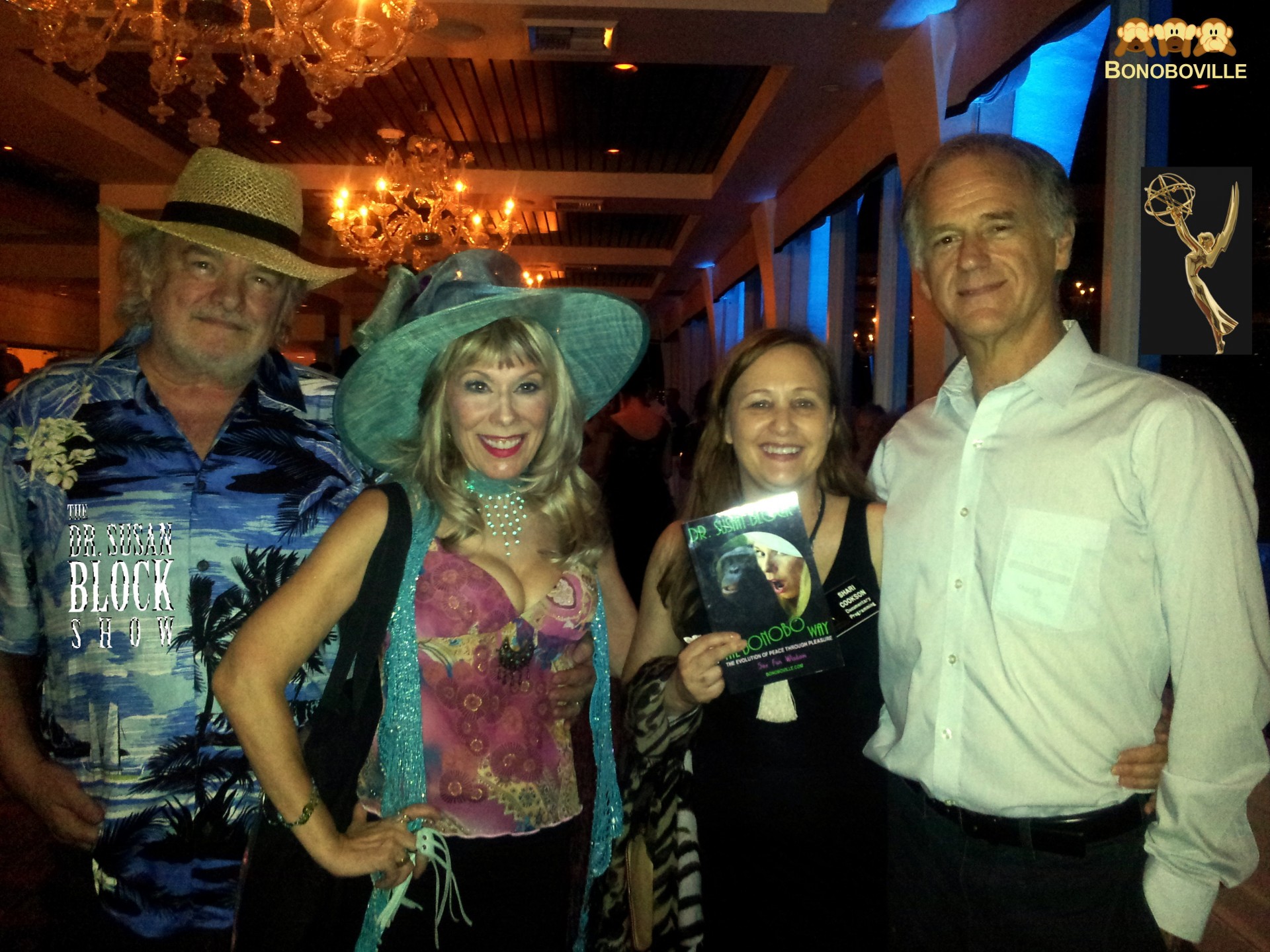 It was also great to reconnect with Shari Cookson, our amazing Emmy-winning HBO show producer who also happens to be on the Television Academy Board of Governors, and our Emmy-winning HBO show editor who happens to be Shari’s hubby, Charlton MacMillan. Not sure what kind of designer relationship they’re in, but it’s been going strong longer than ours—since 1990! Then who do we run into but two chips off the old Block, neither of whom is related to me (at least, not to our knowledge), but both of whom, oddly enough, have more in common with me, than most Blocks in my actual family, most of whom are conservative professionals in and Philly (as opposed to Filly). Mitchell Block, another Emmy-winning filmmaker (they’re everywhere at this soiree!), just produced a segment on the great Claudine André for a documentary about endangered species. To make matters blockier, he’s now working with a young lady named Vanessa Block, who is not only a Block; she went to Yale (class of ‘12) and to the Congo (to make a film about the rape in the DRC), is Jewish (L’shana Tova!), and a knockout, from her pretty pedicured toes to her very unJewish nose. She’s also a lot of fun to hang out with, the bunch of us sprawled on the plush carpet of the Starlight Room. So we had a Block Party at the Emmys Party! Well, there are blue chips off the old Block (like these two), and there are what we might call “flakes” off the old Block, but I won’t say another word about that other Block, because getting two out of three ain’t bad! 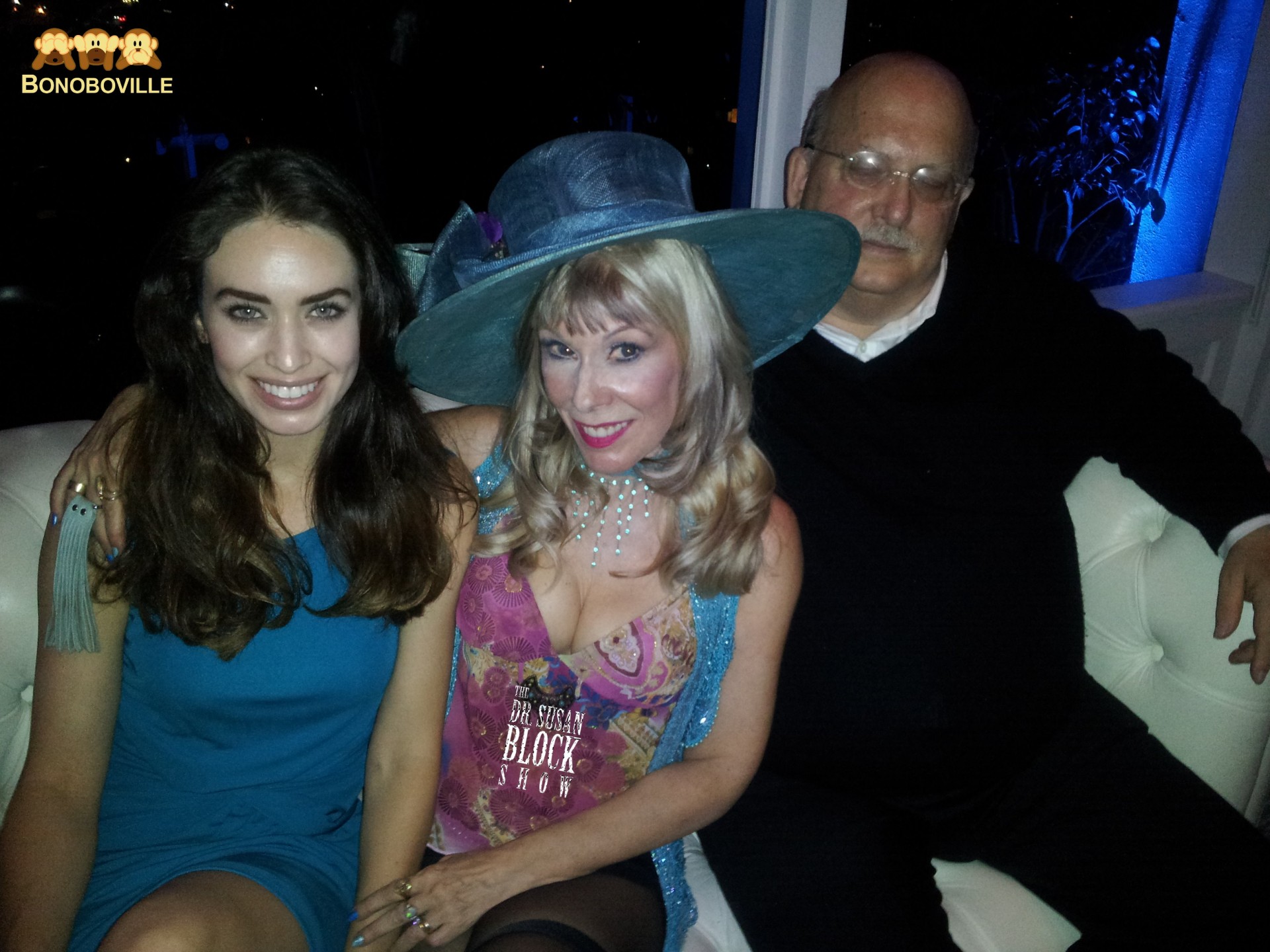 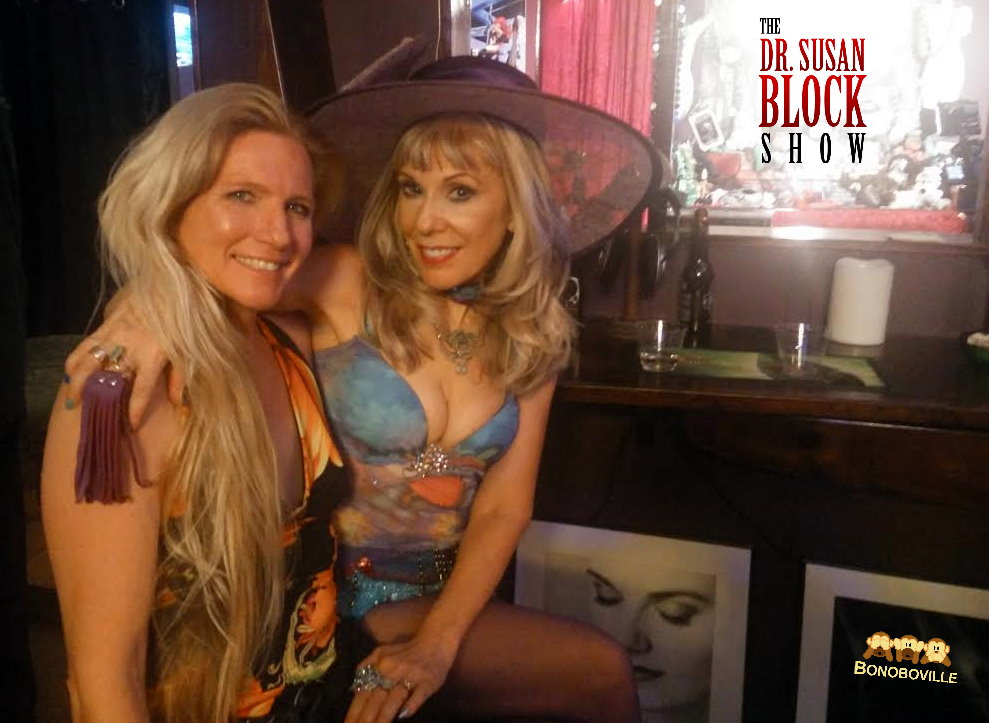 Another shout-out to amazing paleontologist Dr. Lee Berger for assembling a group of young scientists and spelunkers who discovered a new human species! Fossils show that this Homo Naledi would climb and swing through the trees as well as walk upright. Sounds very bonoboësque, and just goes to show that the desire to swing is in our genes, as well as in our jeans.