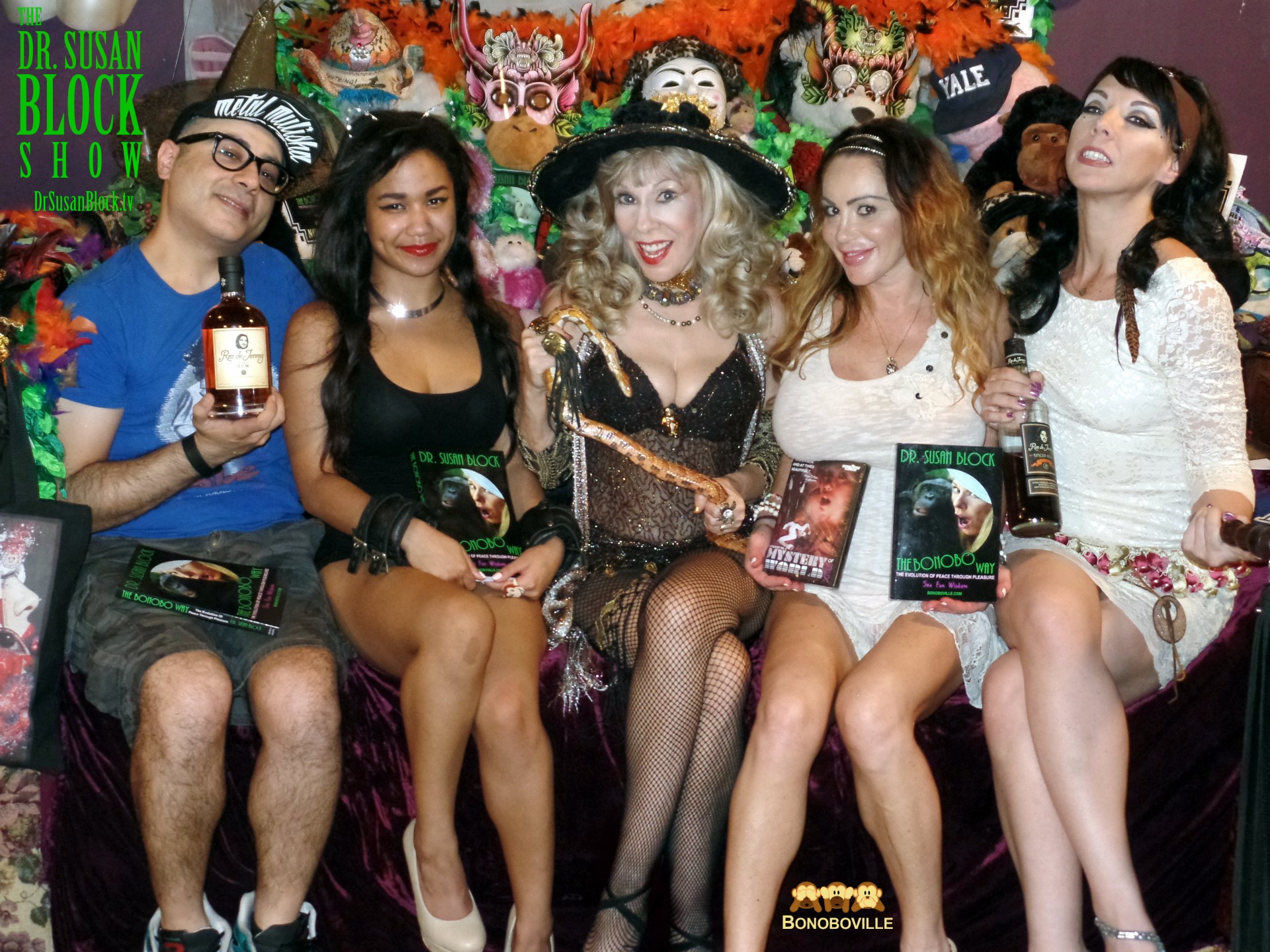 Happy Kink Month! Did you know that October is International Kink Month? 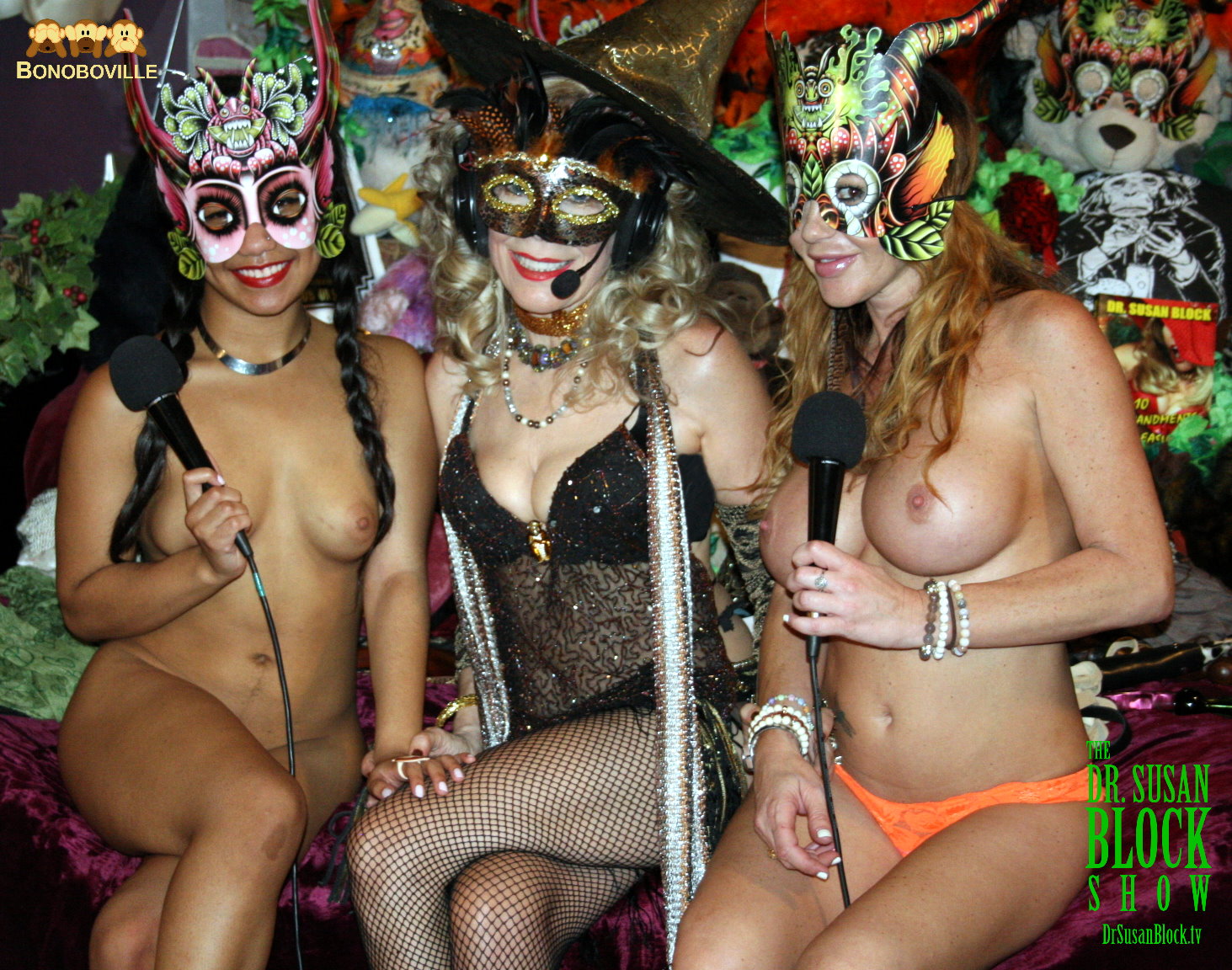 Our Stockroom handcuffs do look 50 shades of sexy around the nubile wrists of our featured guest, Hustler model and rising adult film starlet Loni Legend, a kinkster with a craving for erotic adventure. Loni is also a certain kind of kinkster’s delight; that is, the kind who enjoys that taboo but popular roleplay known as “age play.” Though 20 years old, little Loni looks younger, making her super-hot right now in the “barely legal” genre, especially when she kicks off her heels and puts her hair in pigtails under her cute sparkly “pussy” ears. Snake Eve just loves slithering around her pert petite boobs. 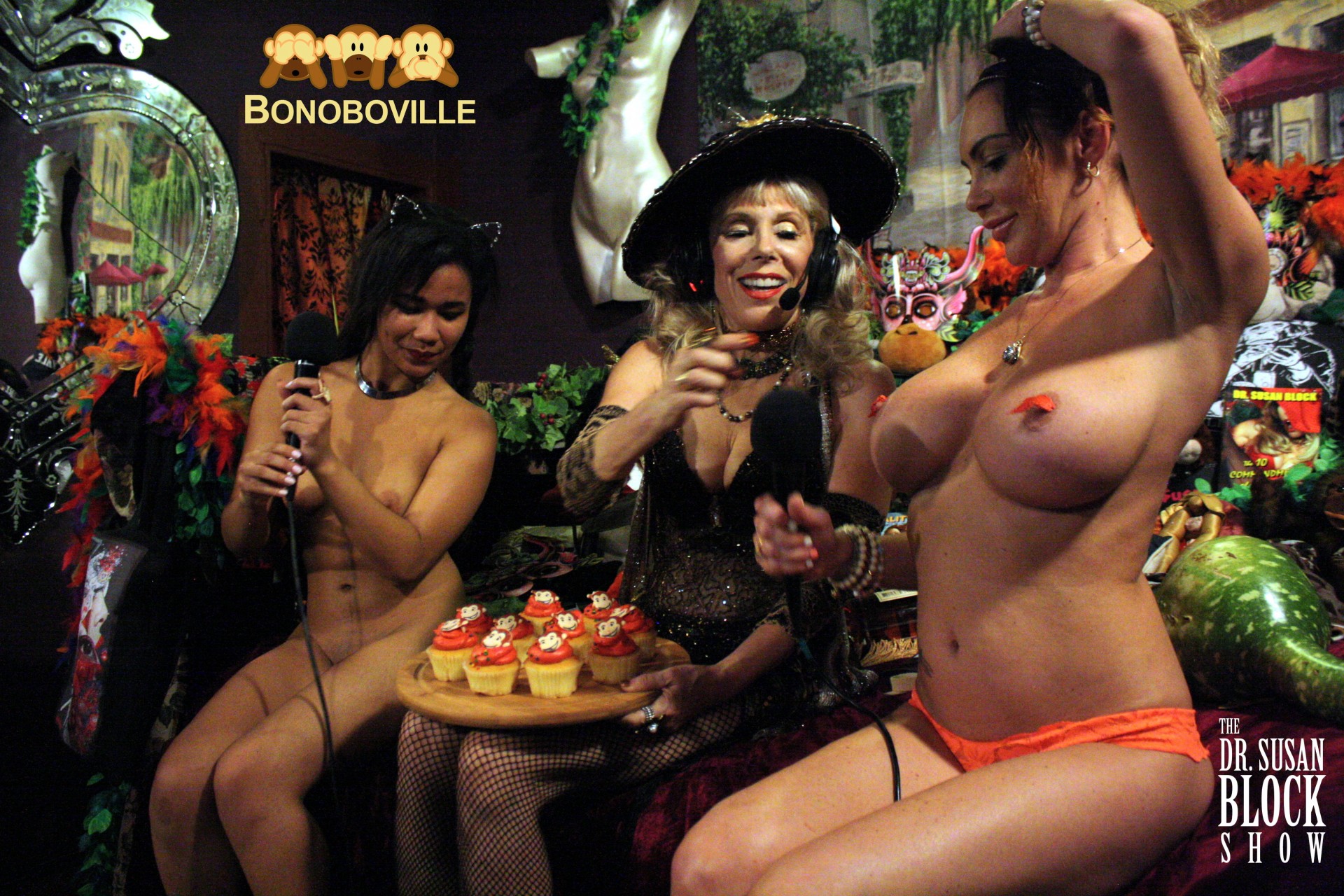 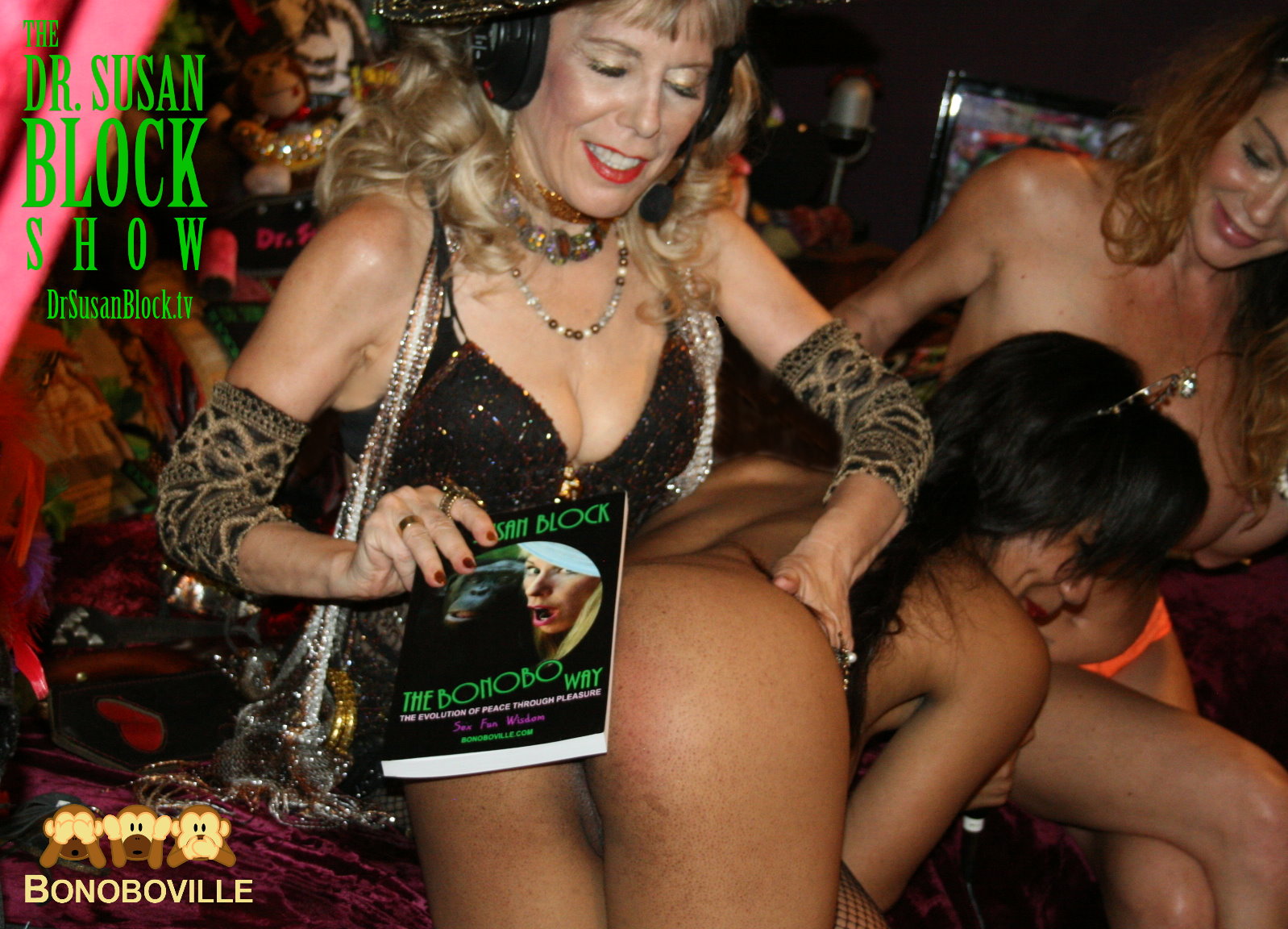 Joining the Kink Month Kick-Off is ever-delightful Dayton Rains—now a webcam and phone therapist with the Institute—who brings autumn flowers, bonobo cupcakes and a fine cigar to the party. Always generous, with a heart as big as her rack, Dayton teaches Loni a special way to exercise her kegel muscles via “smoking.” Loni is a fast learner, and before we can say “Monica Lewinsky,” her barely-legal but very strong kegels are smoking that cigar like Winston Churchill—if Winston Churchill were to be reincarnated as a 20-year-old vagina. 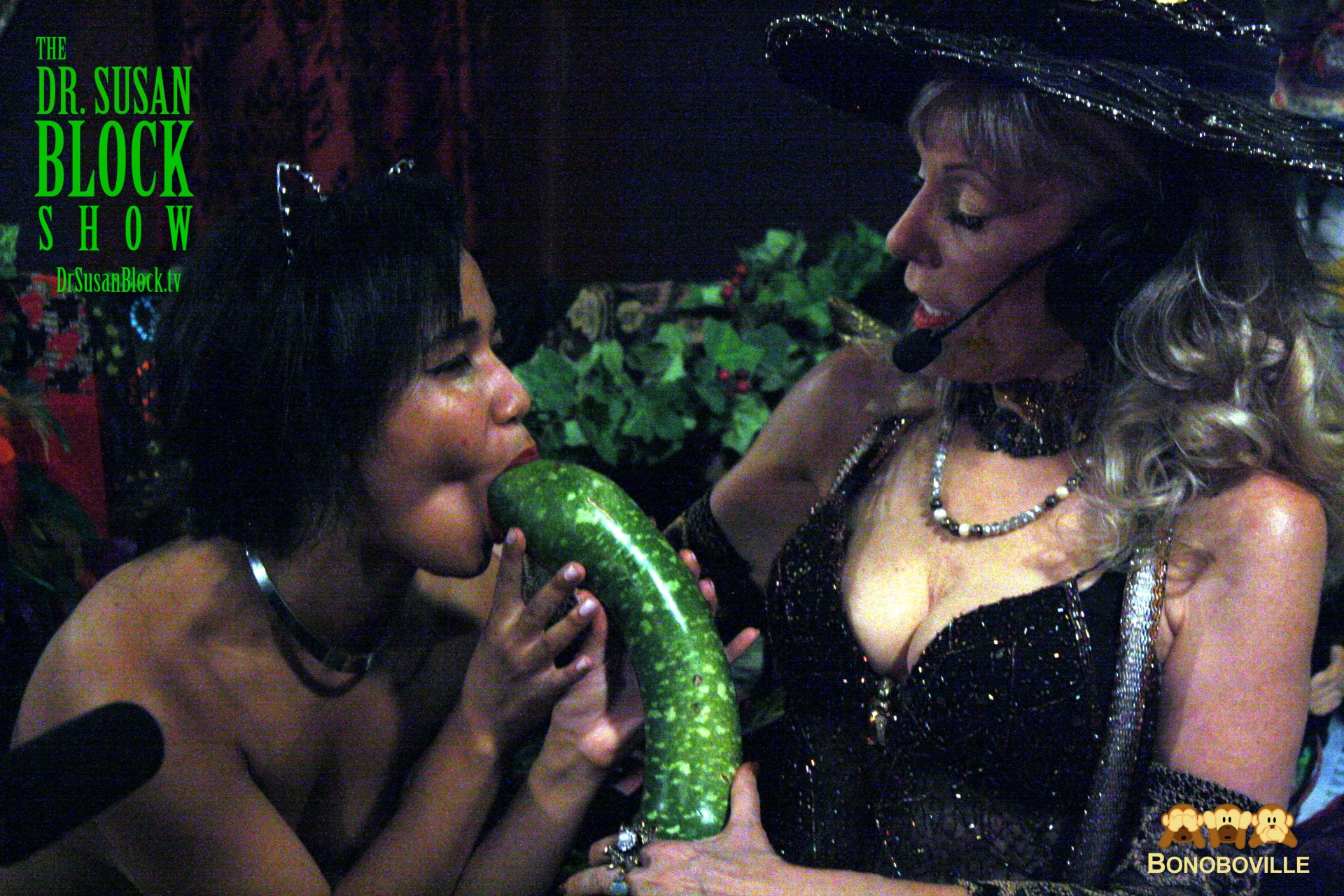 Special thanks to DrSuzy.Tv show producer Biz Bonobo, a.k.a. Elizabeth Aston, who puffs on the stogie before the Dayton-Loni cigar-challenge smoke-off (it was a tie), and L’erotique who takes sloppy seconds. Then we paint each other’s nipples and clits with hot pink cupcake frosting and lick it up—suhweet! 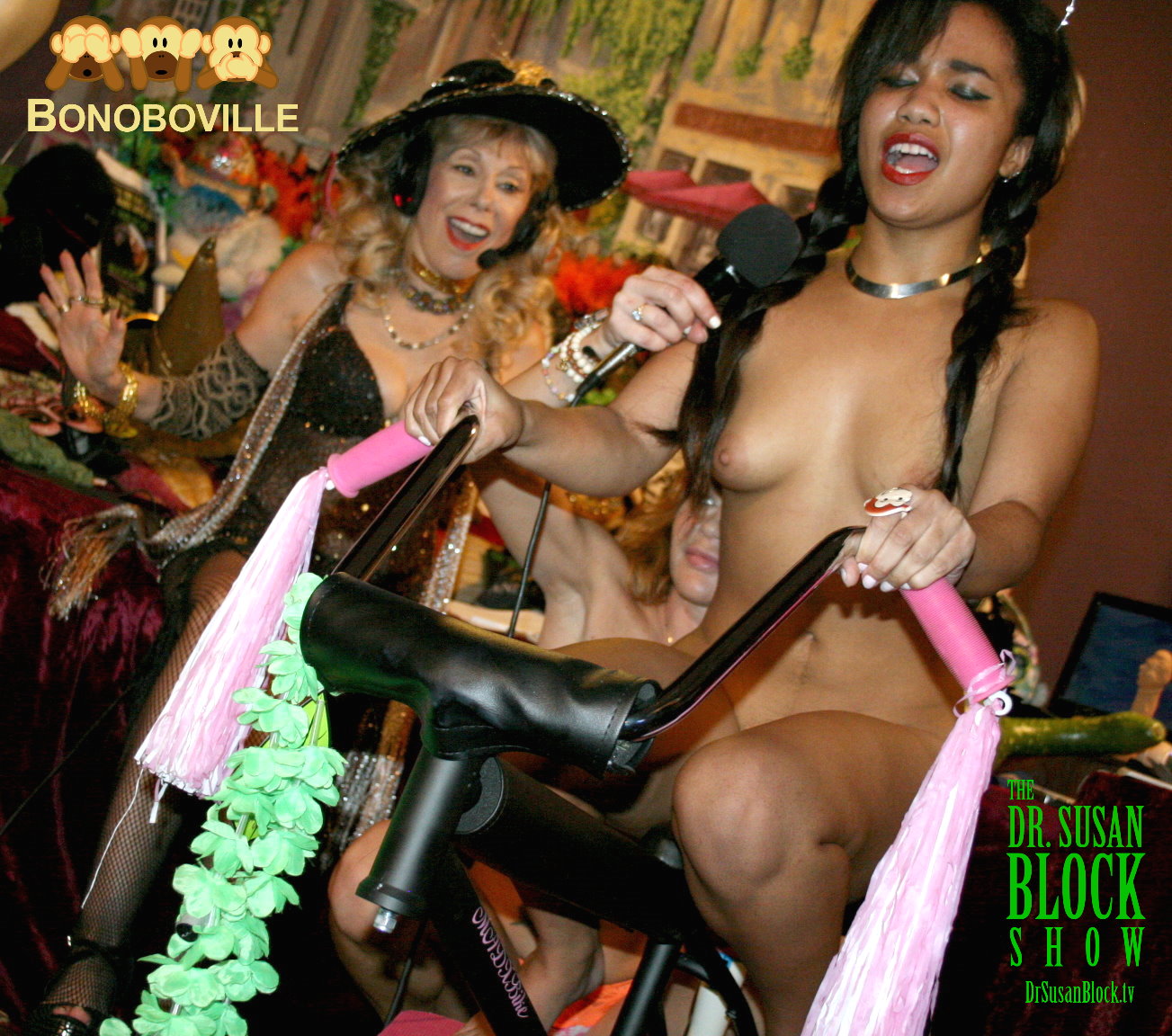 All revved up, Loni doffs her dress and hops on Nick Salazar’s Mad-X-Bike, the Ultimate Masturbation Driving Machine with a built-in Hitachi and a rather large pink dong rising up from the seat. Sitting all the way down on that thing, little Loni races that bike to a big audible orgasm that has the whole Womb Room reeling in communal ecstasy. Brock is so happy (his pleasure is to give pleasure to others, he says), that he even gamely drops trou and shows us his “drunk dick.” For being so good (check out the way she sucks my big green gourd!), I give naughty little Loni a Bonobo Way book-spanking, and the three of us don Agwa masks to become the Masked Witches of Kink Month, scaring Capt’n Max hanging out at the bar with model-svelte Tammie Parrot masquerading as Venus in Furs. 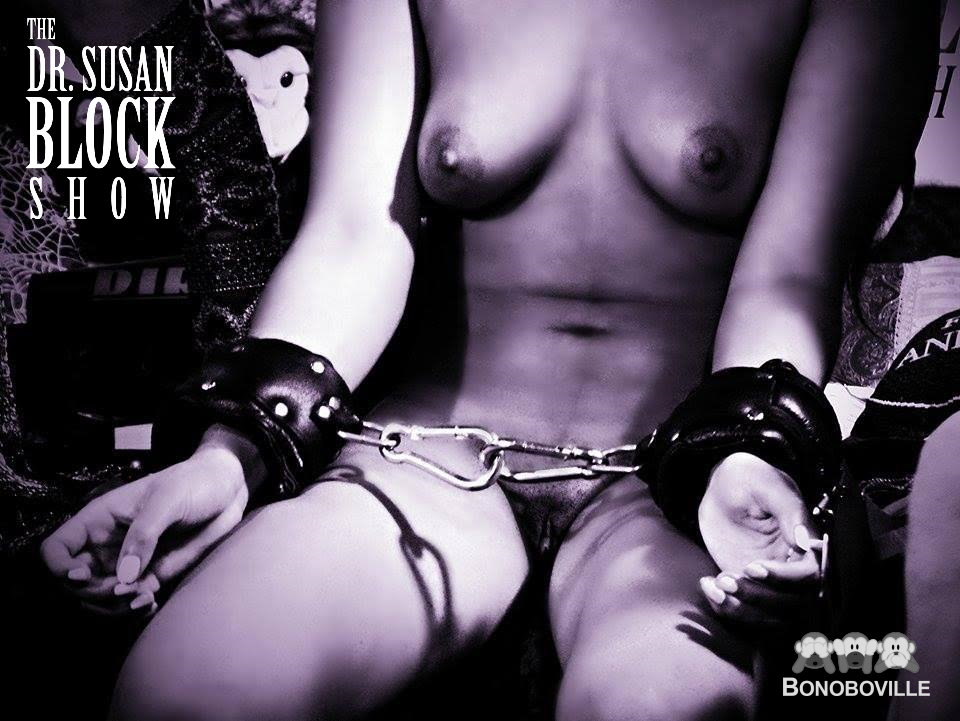 We wind up the show with a plea to stop the killing—both the civilian mass murders, like the one that killed 10 in Oregon last week, and the military bombings, like the one that destroyed a Doctors Without Borders hospital in Afghanistan just yesterday, killing 19 staff members and patients. These official and unofficial atrocities have become an all-too-common aspect of the American Way. Instead, let’s take a different road and follow the Bonobo Way, honoring the spirit of Kink Month every day, channeling our kinks into consensual play instead of bombing, beheading and shooting-to-kill our fellow humans. 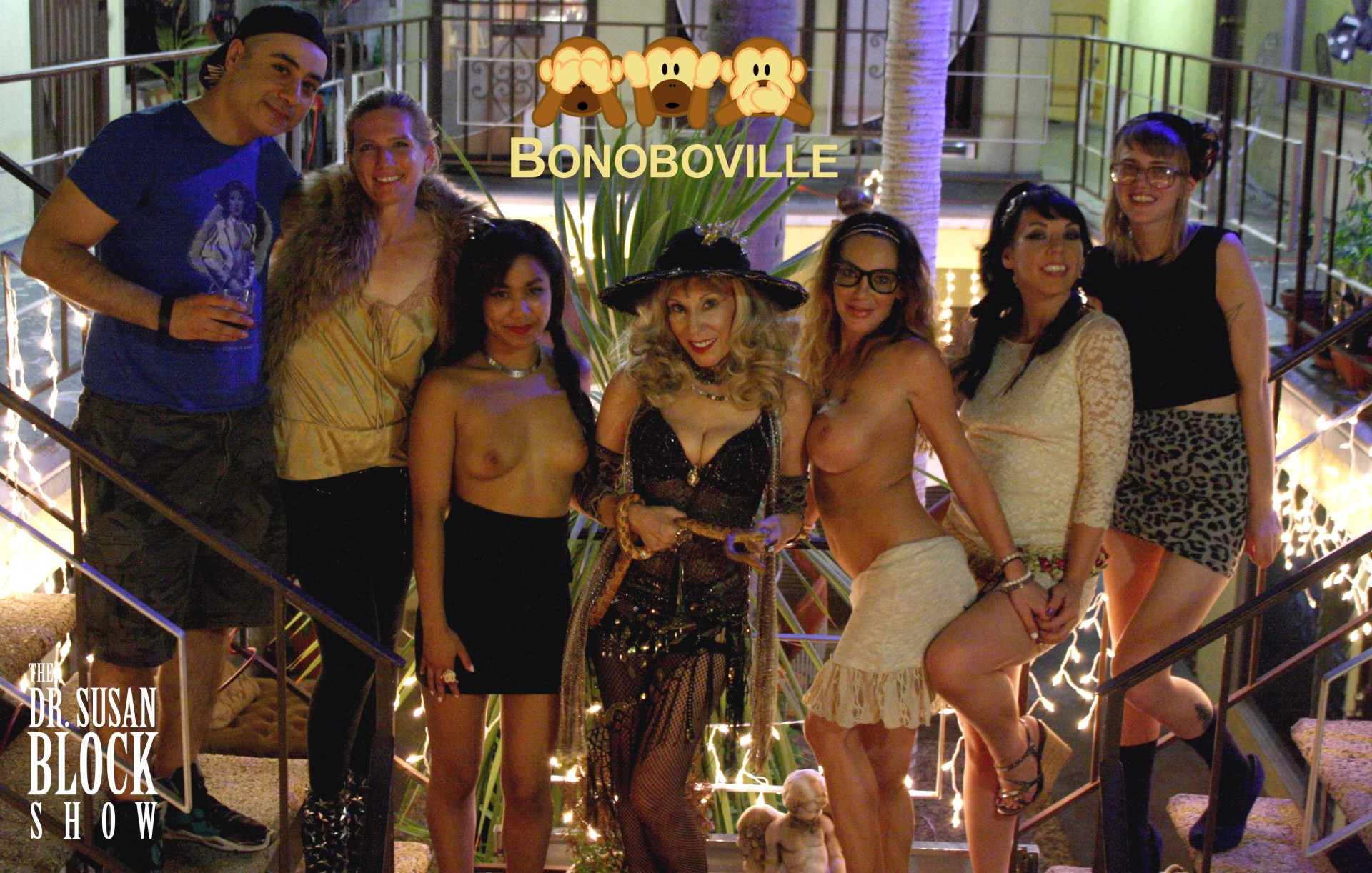 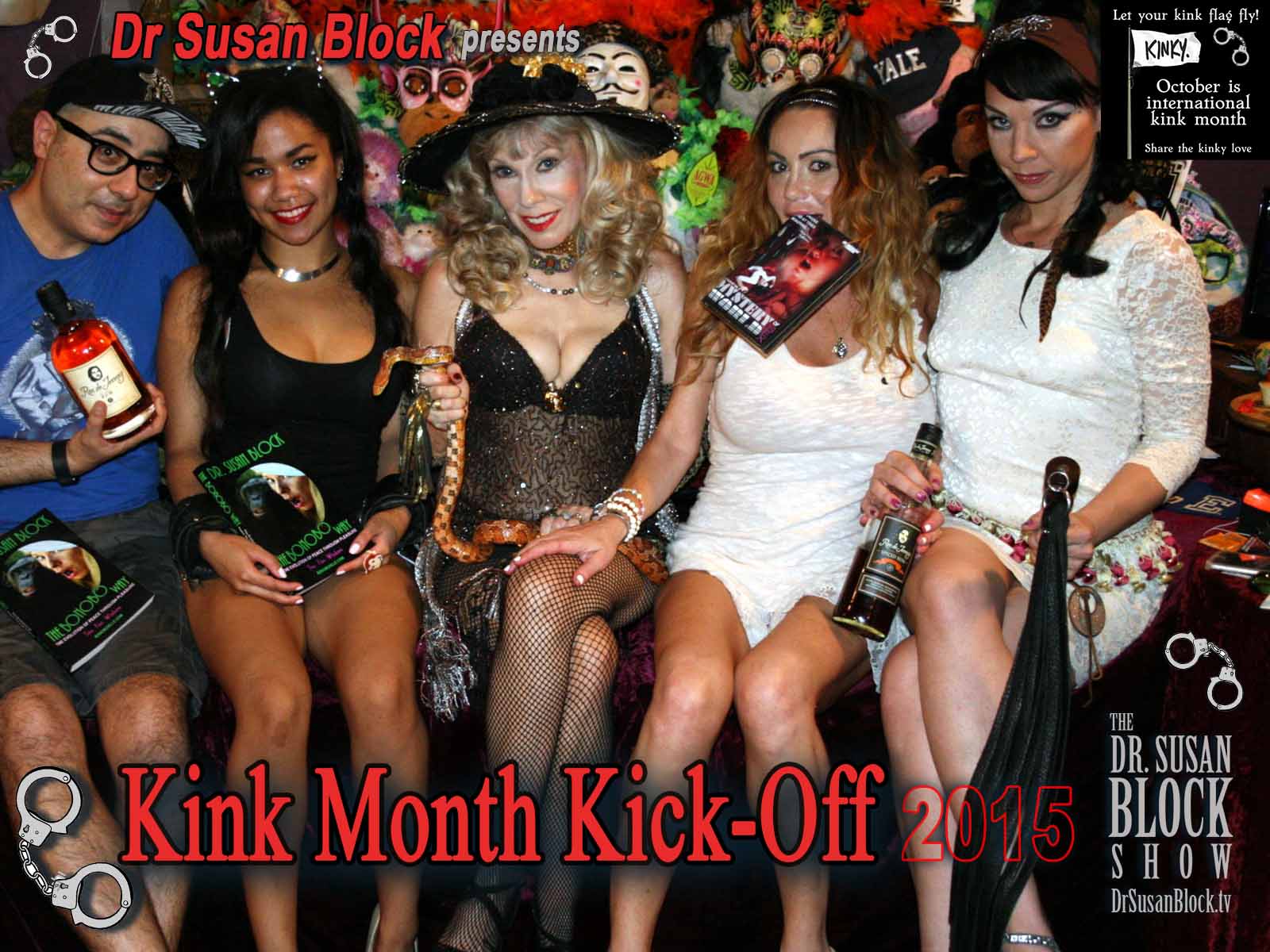