It’s our second show of the second Year of the Bonobo. But it feels like our first, since last Saturday, we’d barely recovered from our New Year’s hangovers before we dove into The DrSuzy.Tv Awards (with a hat tip to Ultra Vulgar’s great review). Moreover, The SUZYs were a look back on 2015’s awesome 50-some shows, not a spring forward into Sweet ’16. So it’s this show that feels like our first opportunity to fulfill our resolution to #GoBonobos in 2016, and with three wonderful, brand new guests and one old favorite from the diverse worlds of Hollywood, Porn Valley and home-brewed beer, it’s a scintillating start. 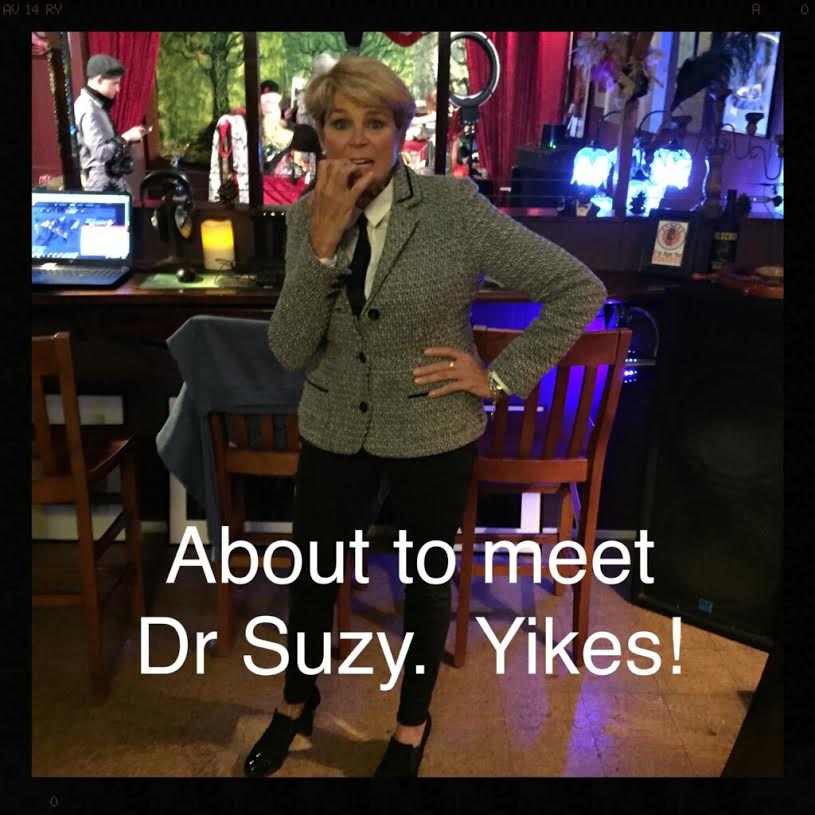 First up on the bed with me and Snake Eve is the eternally adorable Kristine DeBell, former Playboy cover girl, Jackie Chan’s girlfriend in The Big Brawl and the cutest camp counselor in Ivan Reitman’s Meatballs with Bill Murray, among other Hollywood credits. 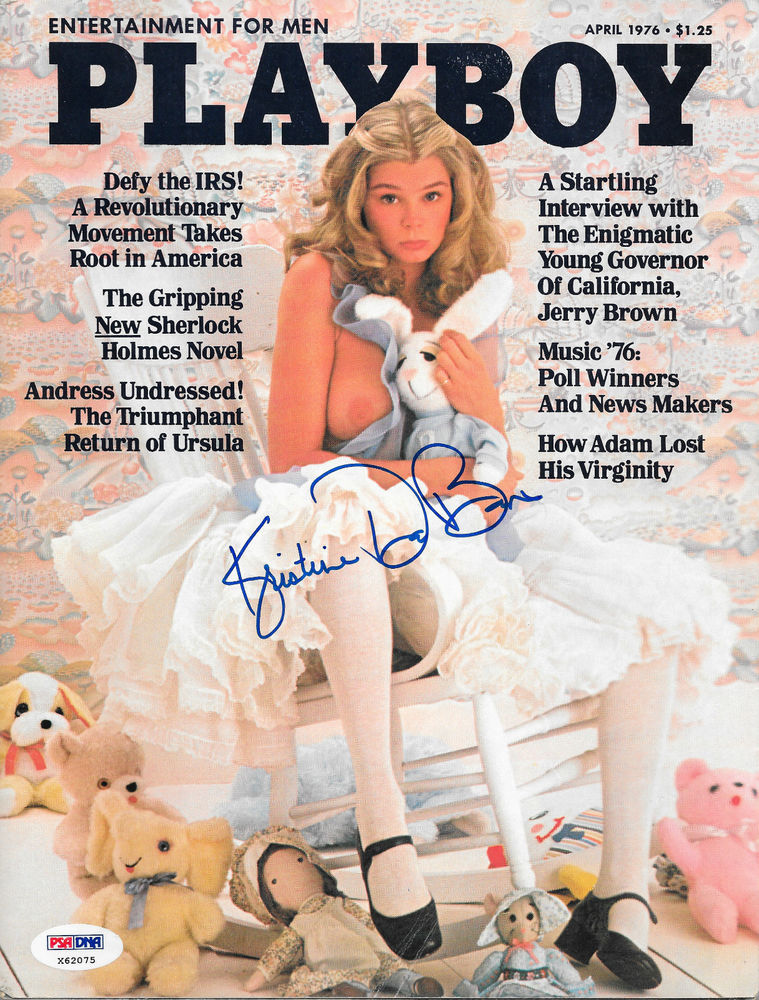 Kristine DeBell (with same expression as above) on the cover of Playboy, April 1976

She’s also in the new Amazon movie Hunter: Future Cop with Ron Becks, in which this wholesome mom plays an “evil” villainess. 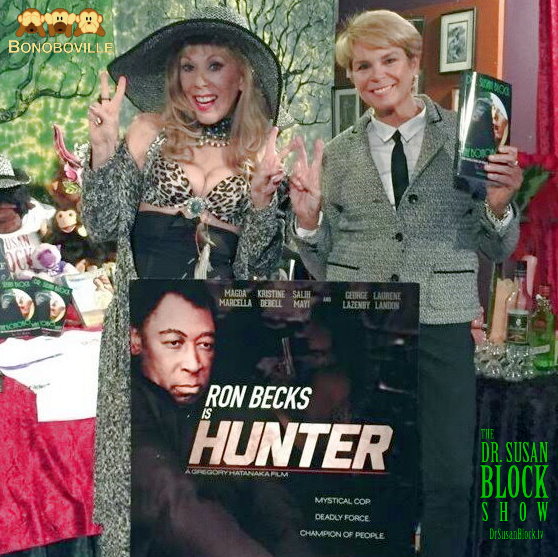 Who Will Eat Jake’s Meaty Balls? 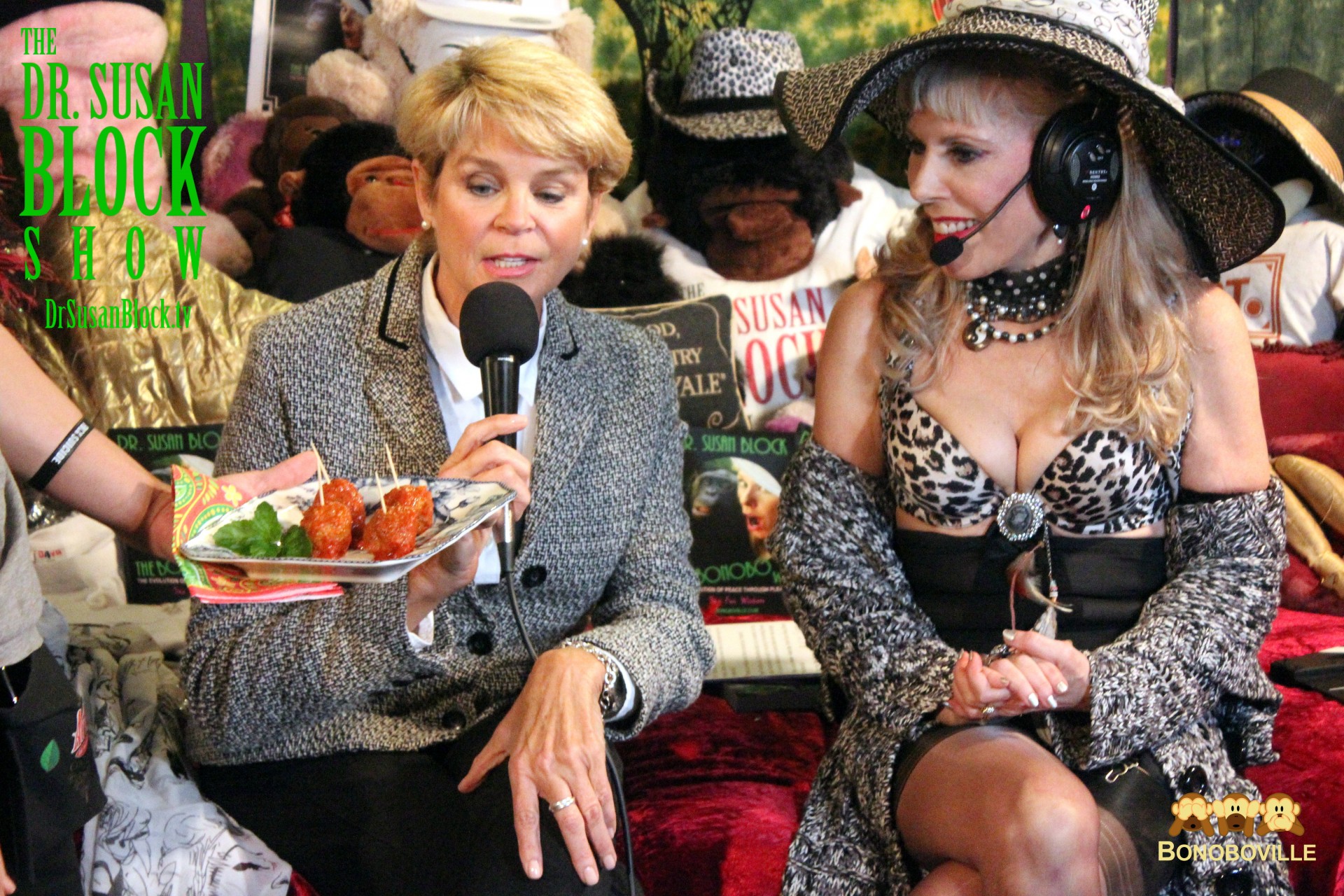 Kristine does seem to be genuinely touched by the gesture but, being vegetarian, she politely declines the offer to eat Jake’s balls. 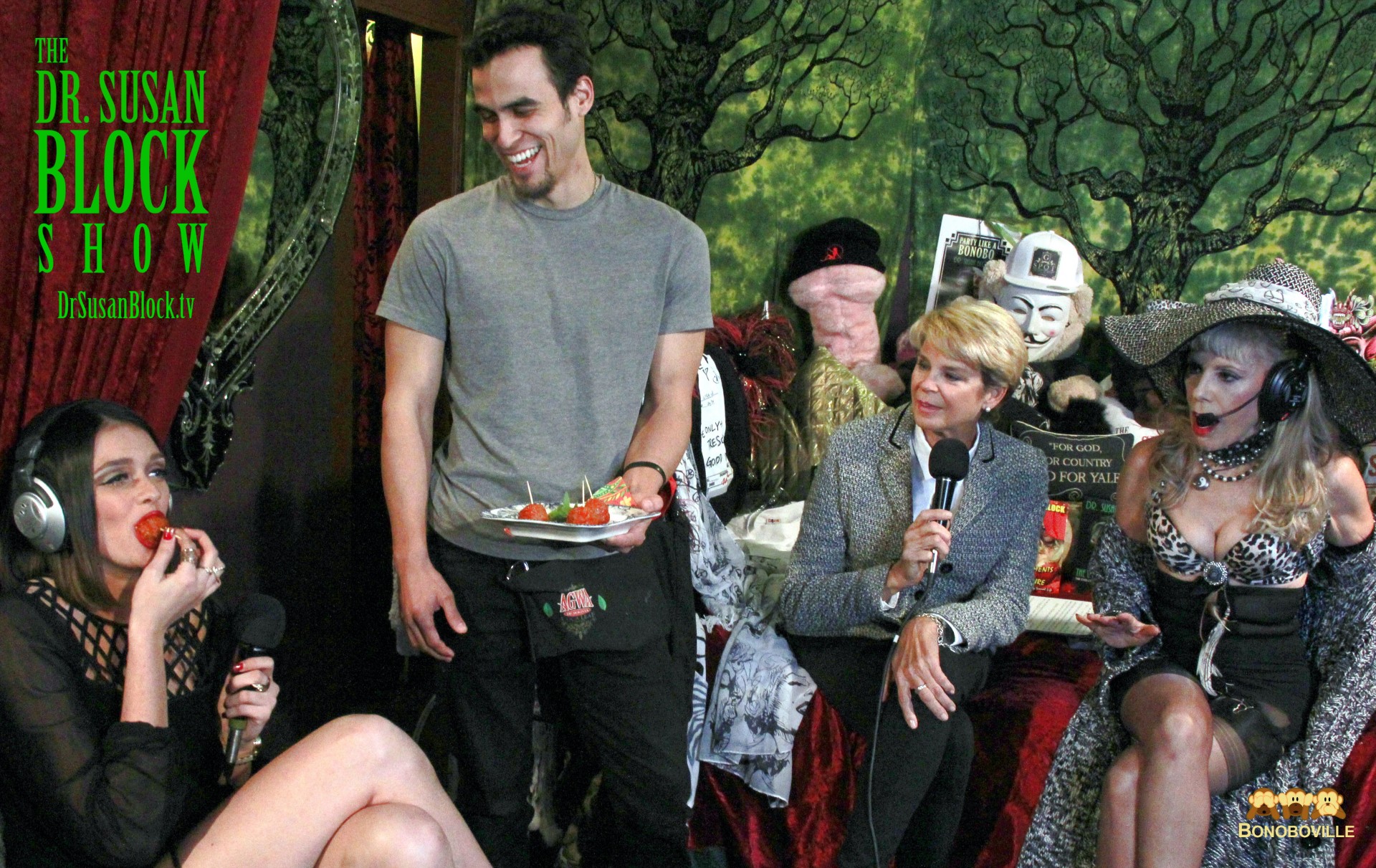 Jake is a bit forlorn over his balls being too meaty for Kristine, until my next featured guest comes to the rescue. Twenty-two years old, strikingly sexy, statuesque Destiny Dare is over six feet tall with no high heels. A former runway model with a College of the Canyons Mass Media and Communications AA, she is now an Ideal Image model. With all eyes on her shiny lips and glittering manicure, Destiny plops Jake’s first big ball right into her mouth, bites it, swallows and then ravenously deep-throats the rest. 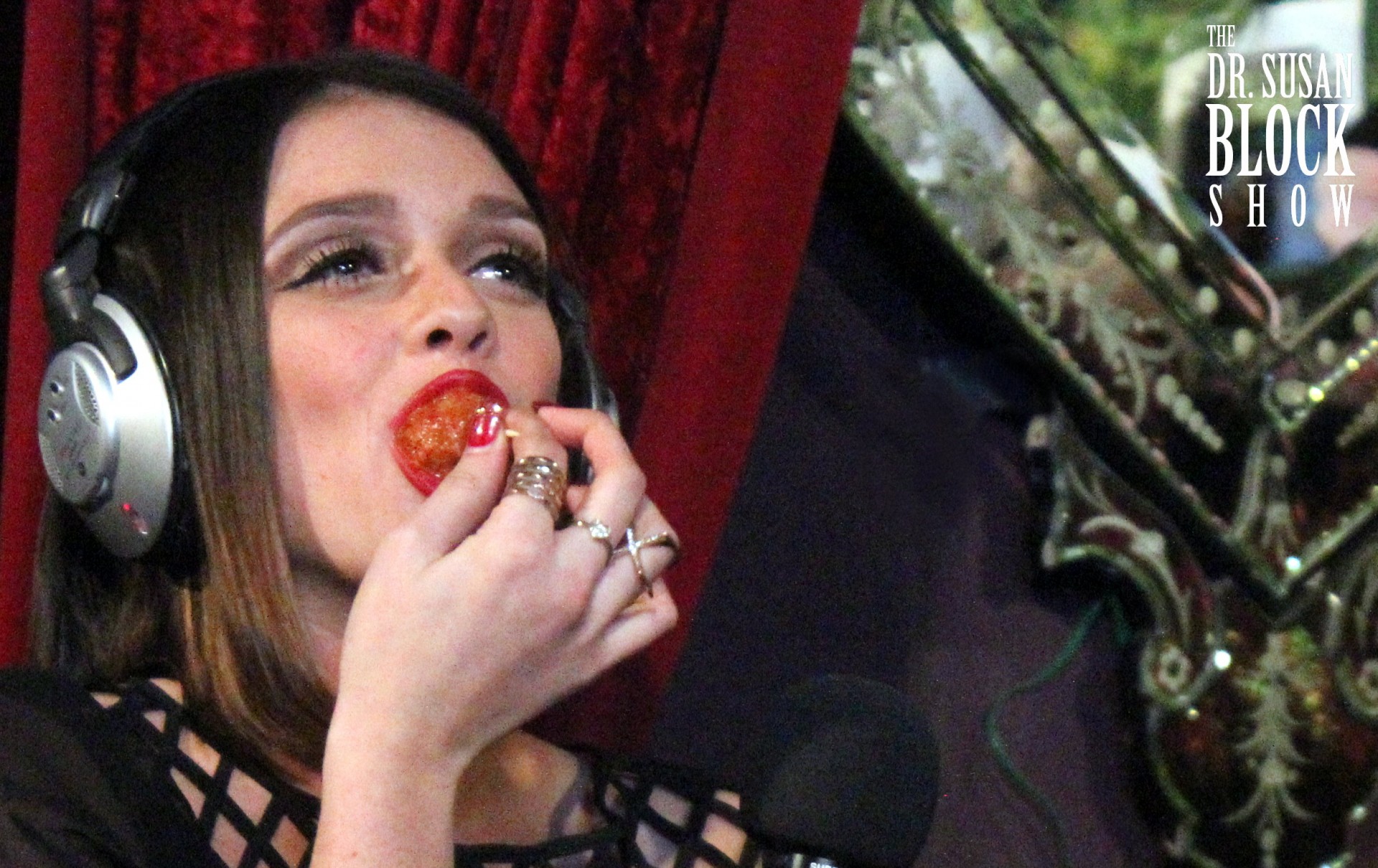 All that the rest of us can do is gasp in amazement before returning to our previous discussion about Kristine’s love life. She demurely insists she didn’t have sex with Bill Murray or Jackie Chan when she played his girlfriend in The Big Brawl, and even if she did, she wouldn’t “kiss and tell,” though she does confess to getting down with Meatballs’ hunky grip. This single hot Hollywood “MILF” also bemoans her difficulties finding quality sex partners, proclaiming her ardent desire for “anything with two legs,” whereupon several guys in the Womb Room, including our own grip, volunteer for the job. Meanwhile on Twitter, “Brad” confesses that he masturbated to the more revealing aspects of Kristine’s oeuvre back in the day. You can see in Kristine’s sparkling eyes that her love life is improving already!

Next up on the bed is Arthur McDee, home beer maker and hops guru who brews up a pint right in the Womb Room. Again, Kristine demurs (she’s also not a drinker), while Destiny scarfs down her share of beer and Kristine’s too. Apparently, growing girls crave home-brewed beer! 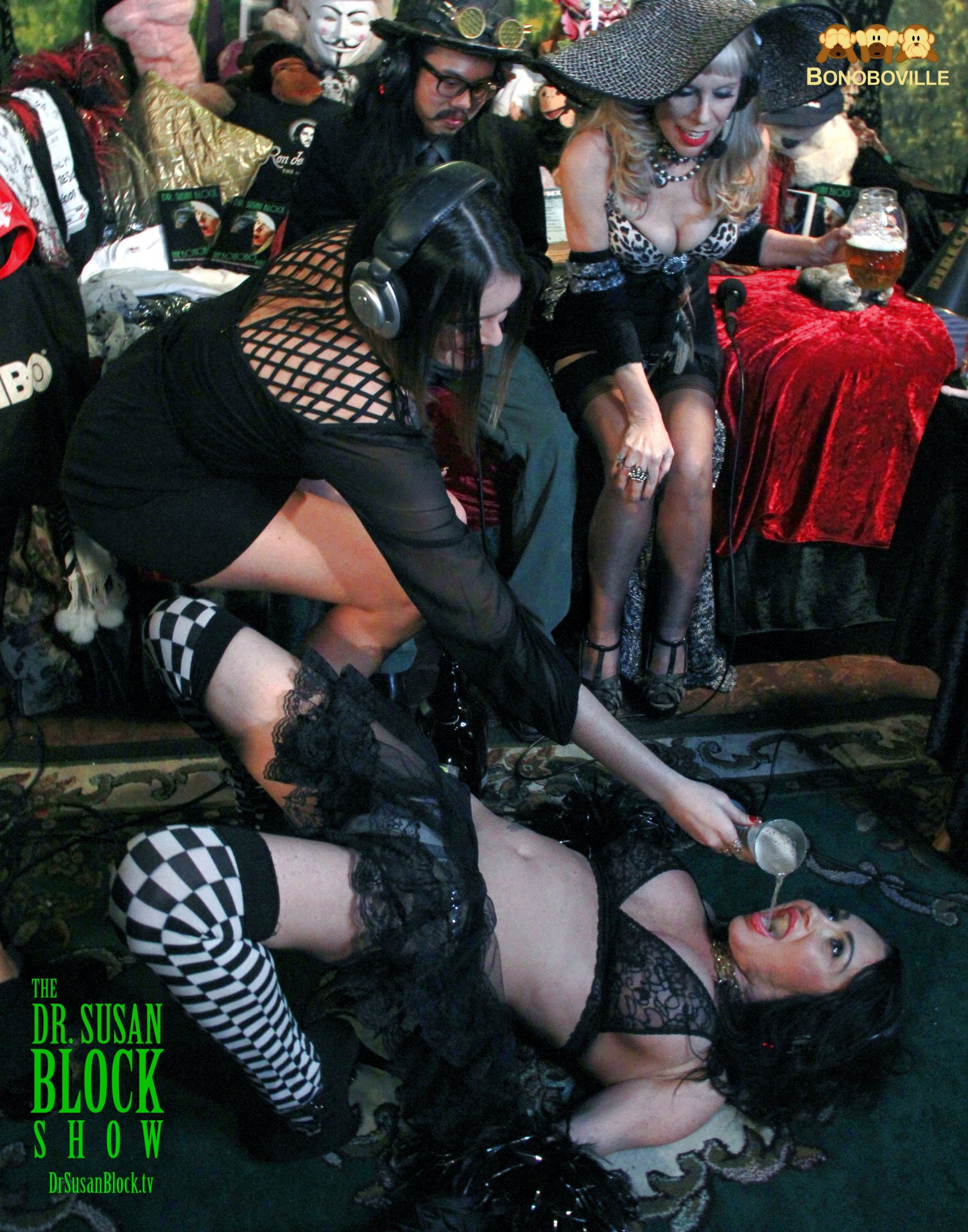 Kristine Gets Lei’d on DrSuzy.Tv!

Which brings us to Bonoboville Communion with our favorite award-winning liqueur, Agwa di Bolivia Herbal Coca Leaf Liqueur. Having just received a bunch of Agwa-green leis, I ceremoniously place a garland around Kristine’s neck and pronounce her “lei’d,” which, on radio, is as good as laid. Her after-being-lei’d smile is so radiant, everyone else wants to get lei’d too, and they do. 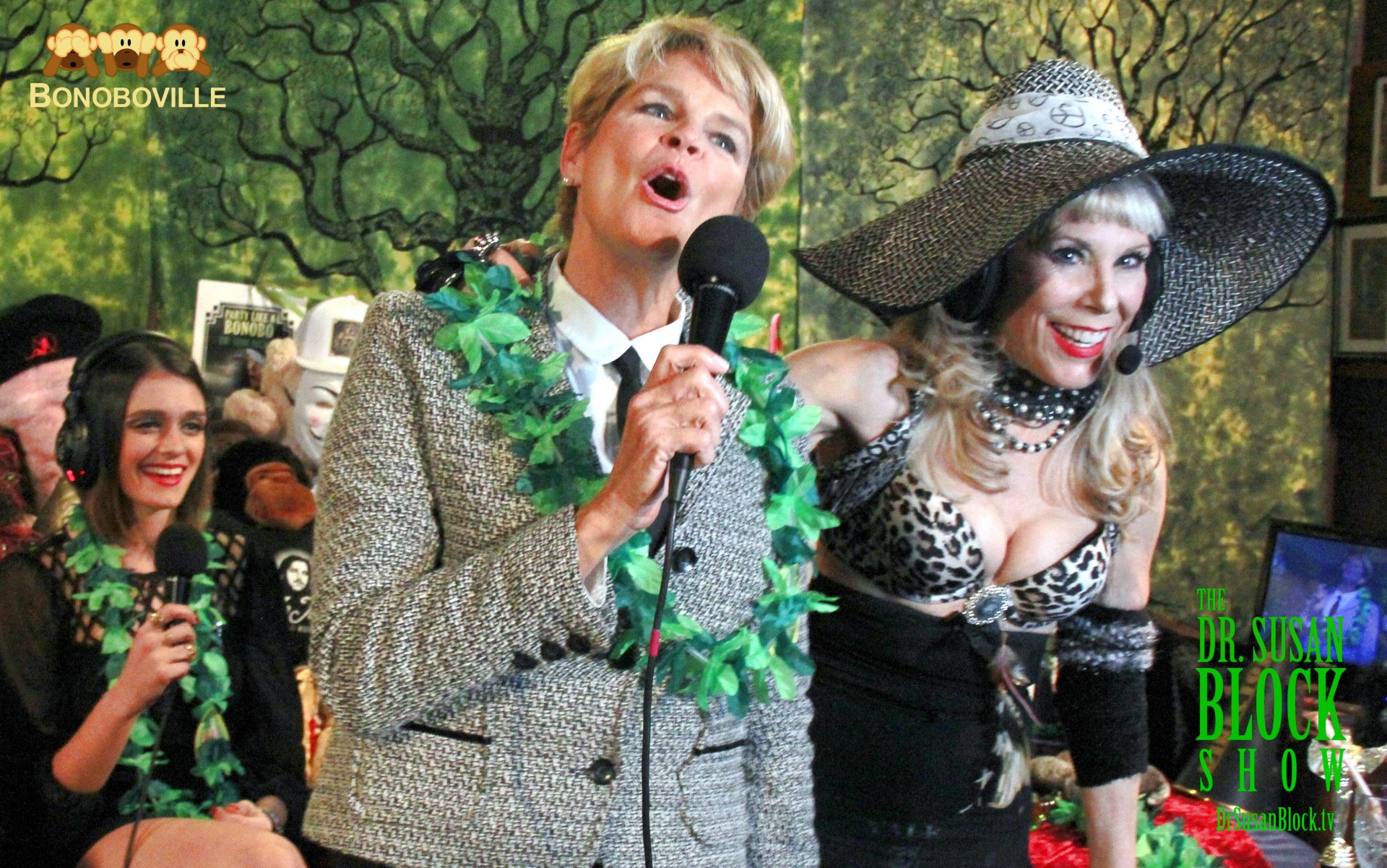 Everybody must get lei’d. Photo: Ono Bo

Now it’s Destiny’s turn at Bonoboville Communion to which Dayton suggests a full serving of King Tee’s royal scepter which flops out, as she unzips his pants, to an even louder gasp from the crowd, especially Kristine who has a front-row view. When Destiny balks, Dayton takes her Communion off Tee’s BBC—a first for our Ms. Rains! Another big first: It appears that the “strictly straight” Destiny’s destiny is to lose her bisexual virginity on DrSuzy.Tv as she takes her Communion from the ample altar of Dayton’s 32DDs. 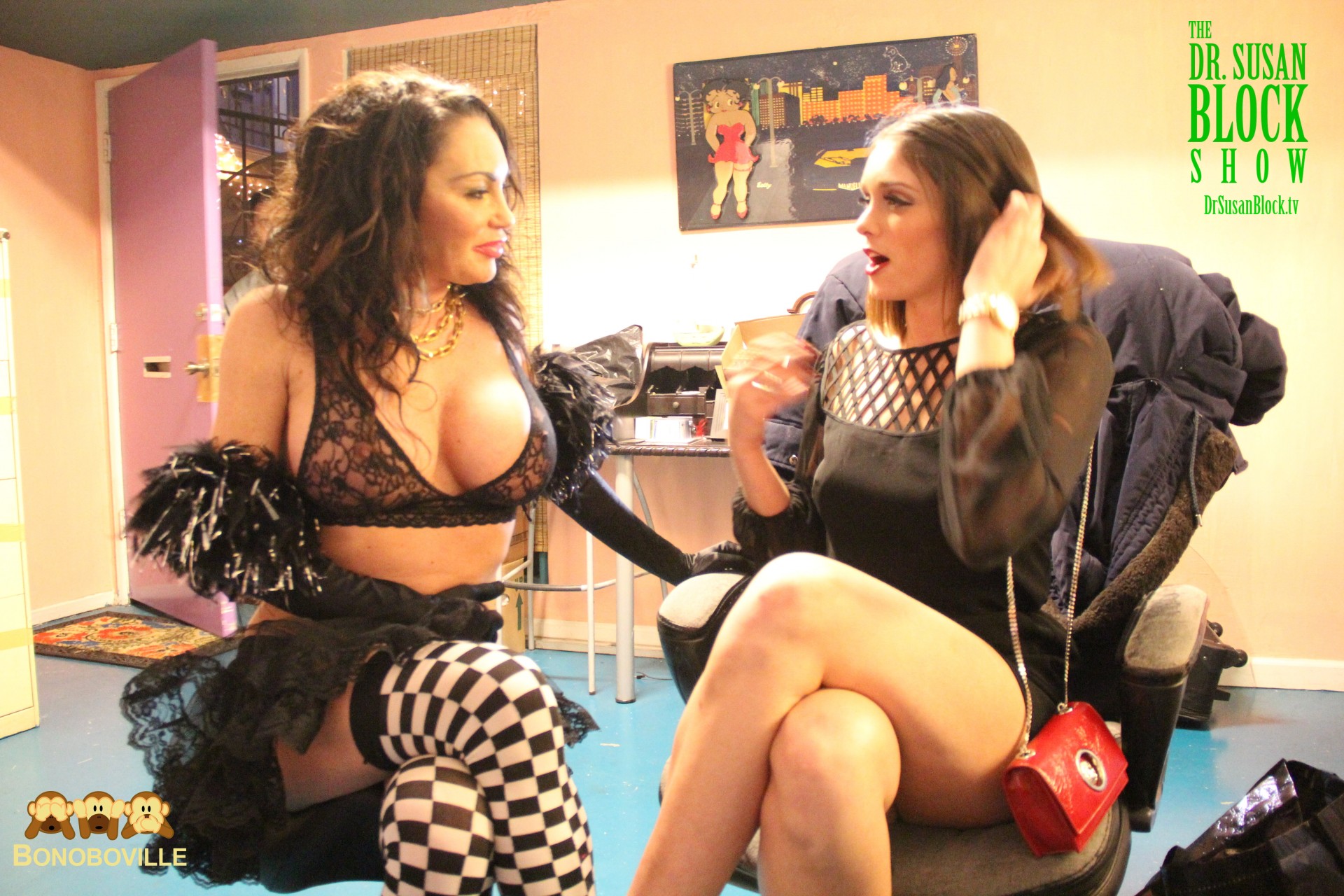 Here in the Bonoboville Green Room, little does Destiny Dare know her destiny is to have her first bisexual experience with Dayton Rains on DrSuzy.Tv! Photo: Ono Bo

Wide-eyed Kristine prefers watching to partaking, which leaves artful Art who insists on taking his first communion from lil ol’ moi. Yes indeed, this organic brew guru loves him some Ivy League boobage with his Agwa. Special thanks to Mark Brown, a.k.a., LaMarkeisha, for doing my hair, which looks great as I sweep it out of Art’s way so he can claim his nipple. But Destiny claims the Xtra-large Agwa shirt, and everybody gets a signed copy of The Bonobo Way, though Dayton gets hers smacked down on her butt. Happy Nude Rear! 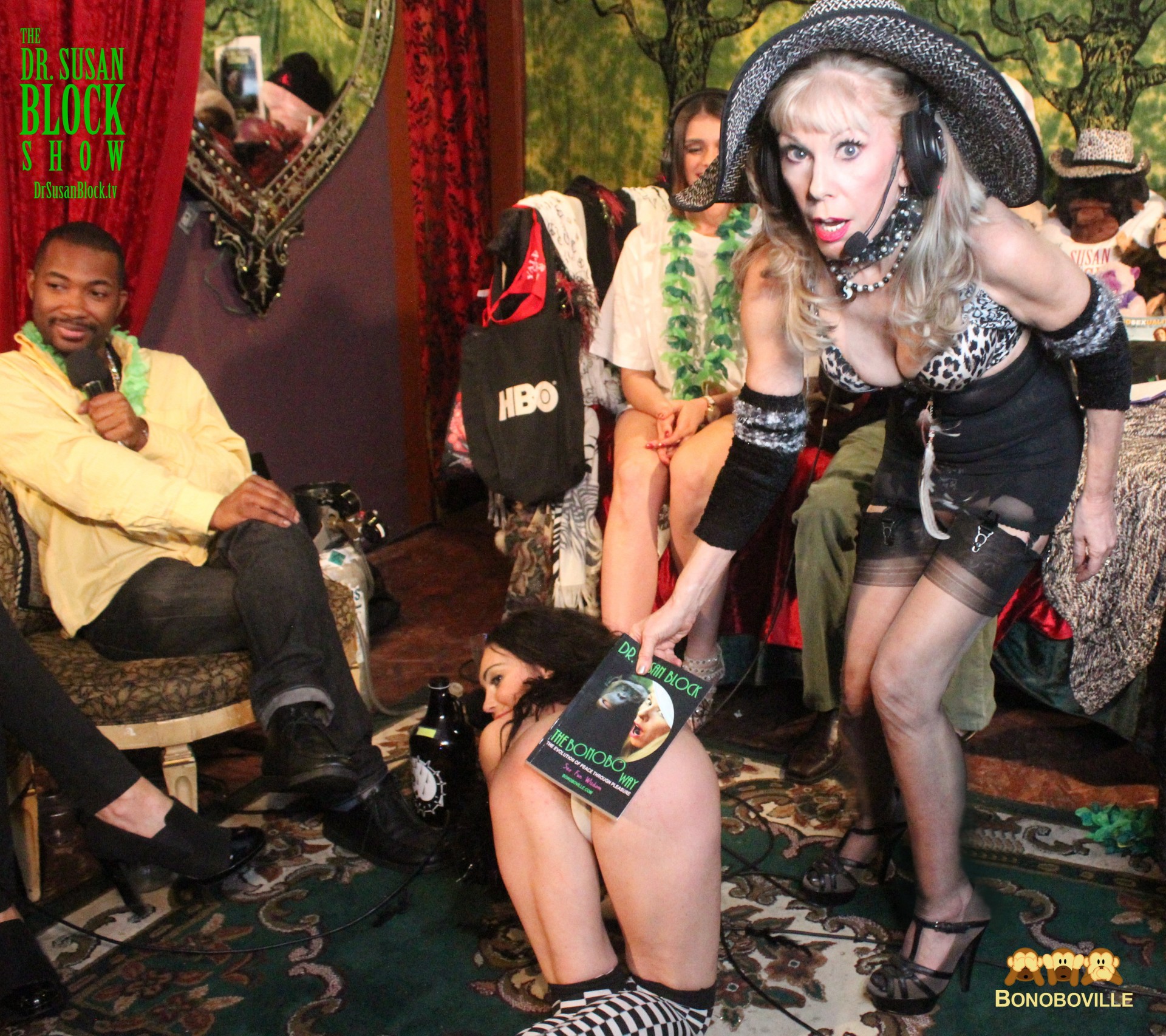 Be well-read or get, well, red! Photo: Ono Bo

Drop Bras Not Bombs! Shoot the gun between your legs. Make beer, not war. Make like bonobos, not baboons.

I know, “world peace” in our times is a long shot, but even if you can’t “change the world,” you can change your world; that is, yourself. The Revolution (and any sustainable New Year’s resolution) starts with you… and me. With us. 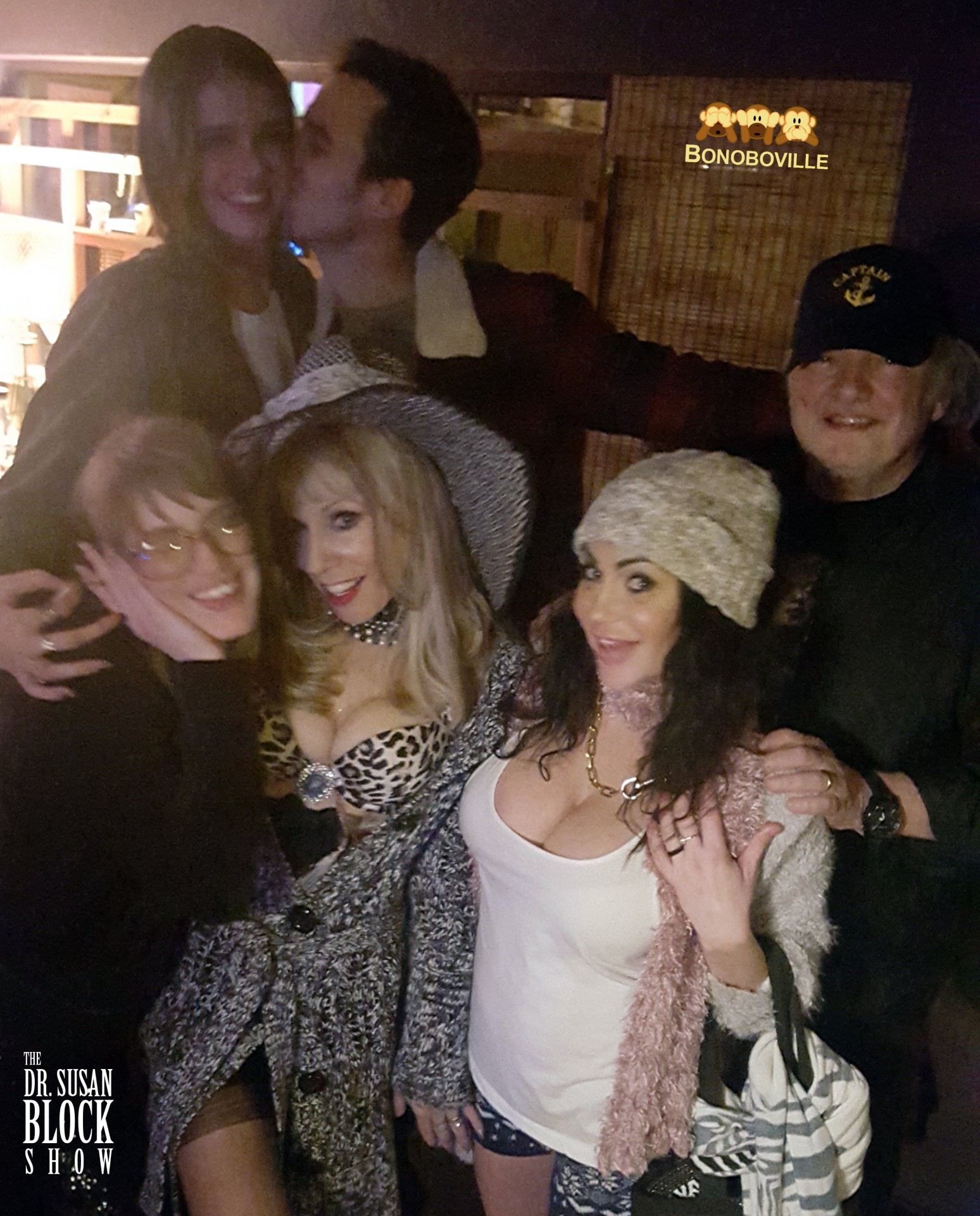 And we are keeping our New Year’s resolution to #GoBonobos in 2016 with this diversity-packed, bonoboësque show, and there is much more to come and come again here in Bonoboville, LAX and abroad.

Shout-out to Dr. SerenaGaia Anderlini D’Onofrio, co-editor of Ecosexuality: When Nature Inspires the Arts of Love, who has graciously invited me to be the Keynote Speaker at the first Ecosexuality Symposium in the Caribbean, January 28-30, 2016 on-campus at the University of Puerto Rico, Mayaguez. 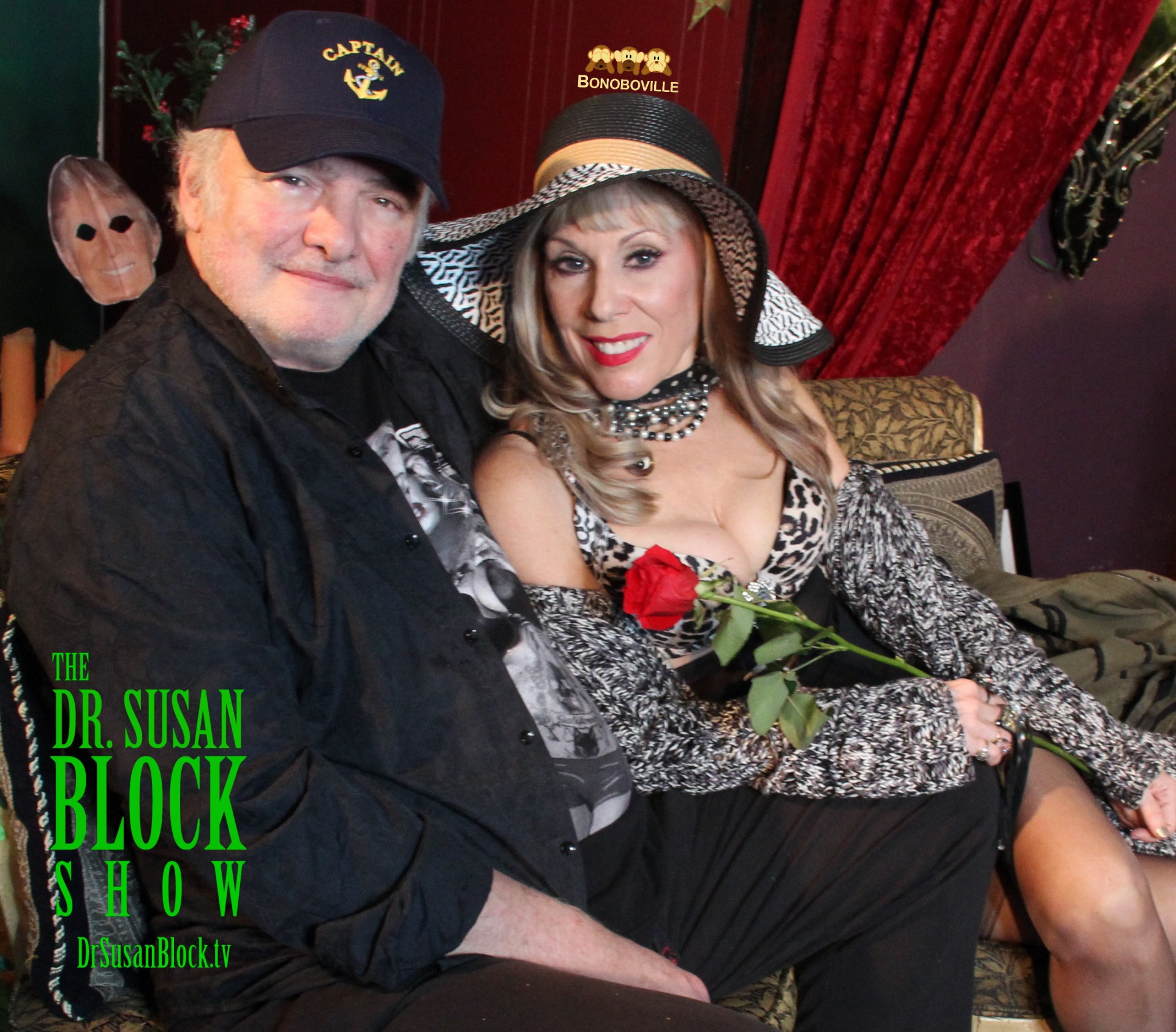 Capt’n Max and I are so excited to spread the Bonobo Way on this beautiful balmy island that neither of us has ever visited before. We know it’s another one of those long shots, but we hope to see YOU there! We’re up for a great ecosexual adventure.

Big thanks to Joe Williamson and Roberto Bonobo, Dr. Susan Block Show associate producer (I love how the abbreviation for that is “ass producer”), for coordinating Kristine’s appearance and helping to get her lei’d. 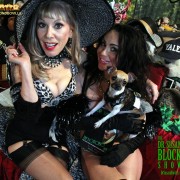 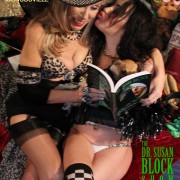 And thanks everyone—special guests, members, dogs and the always evolving Bonoboville crew—for a great, off-and-running start to a brand spanking New Year. 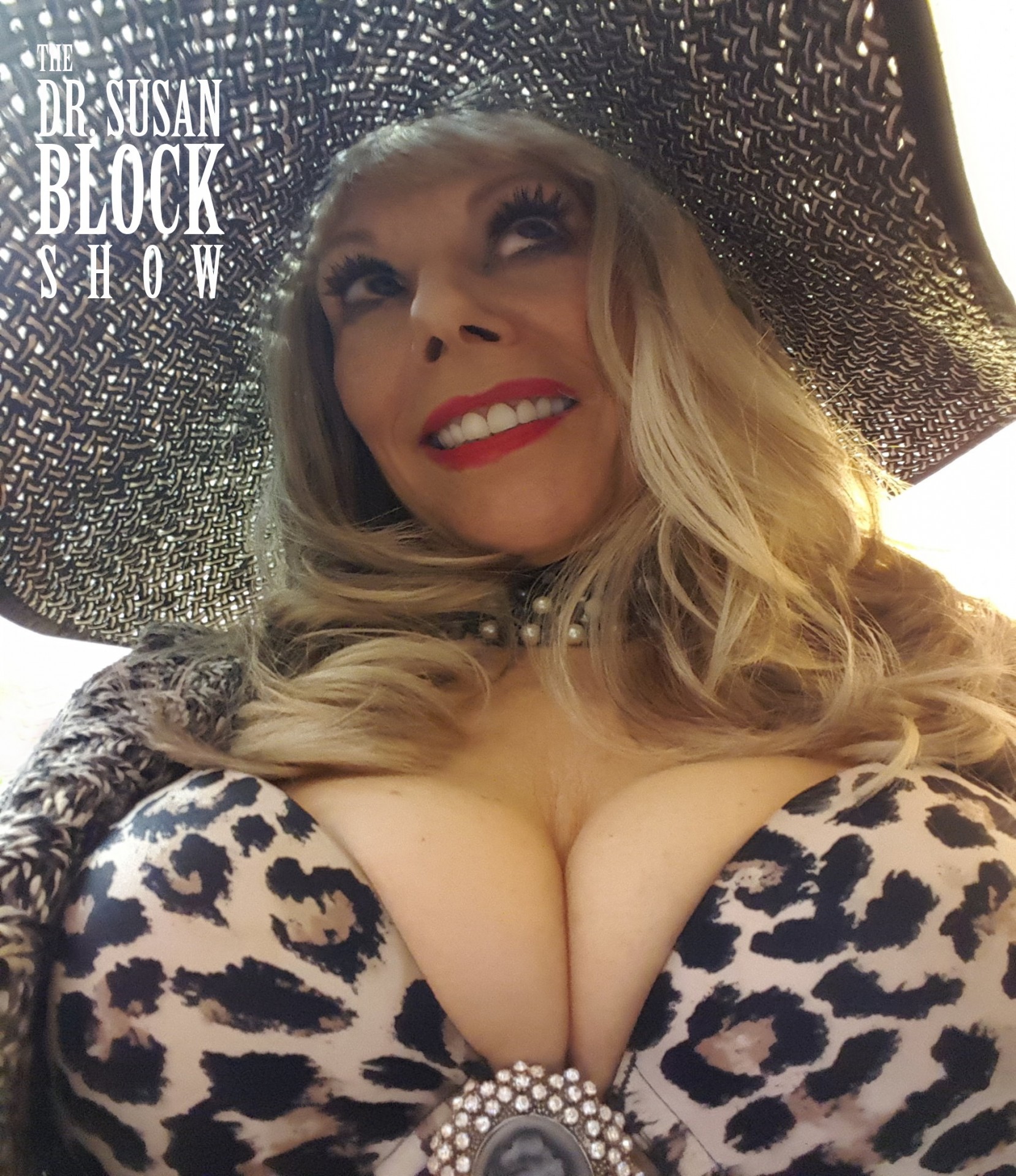 Just as I’m about to post this blog, I get the news that the magnificent, magical, ever-changeable, always bonoboësque David Bowie is gone “Far above the Moon.” His music was one of the more meaningful soundtracks to my life as it was and will continue to be for so many others. I’m so sad, but so grateful for this Man Who Fell to Earth and all the revolutionary art and sexual freedom he shared with us. 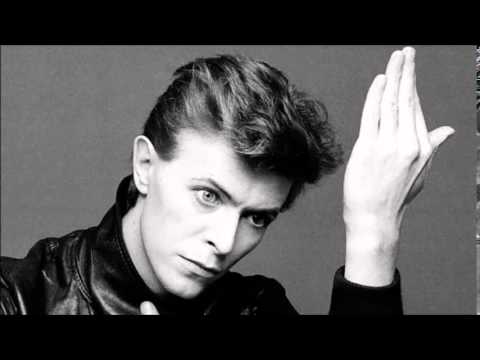 « It’s The SUZYS! The DrSusanBlock.Tv Awards 2015: And The Winners Are… » A Midwinter Night’s Sex Comedy on DrSuzy.Tv