A Bedside Chat on Married Lust, Trust & the Bonobo Way 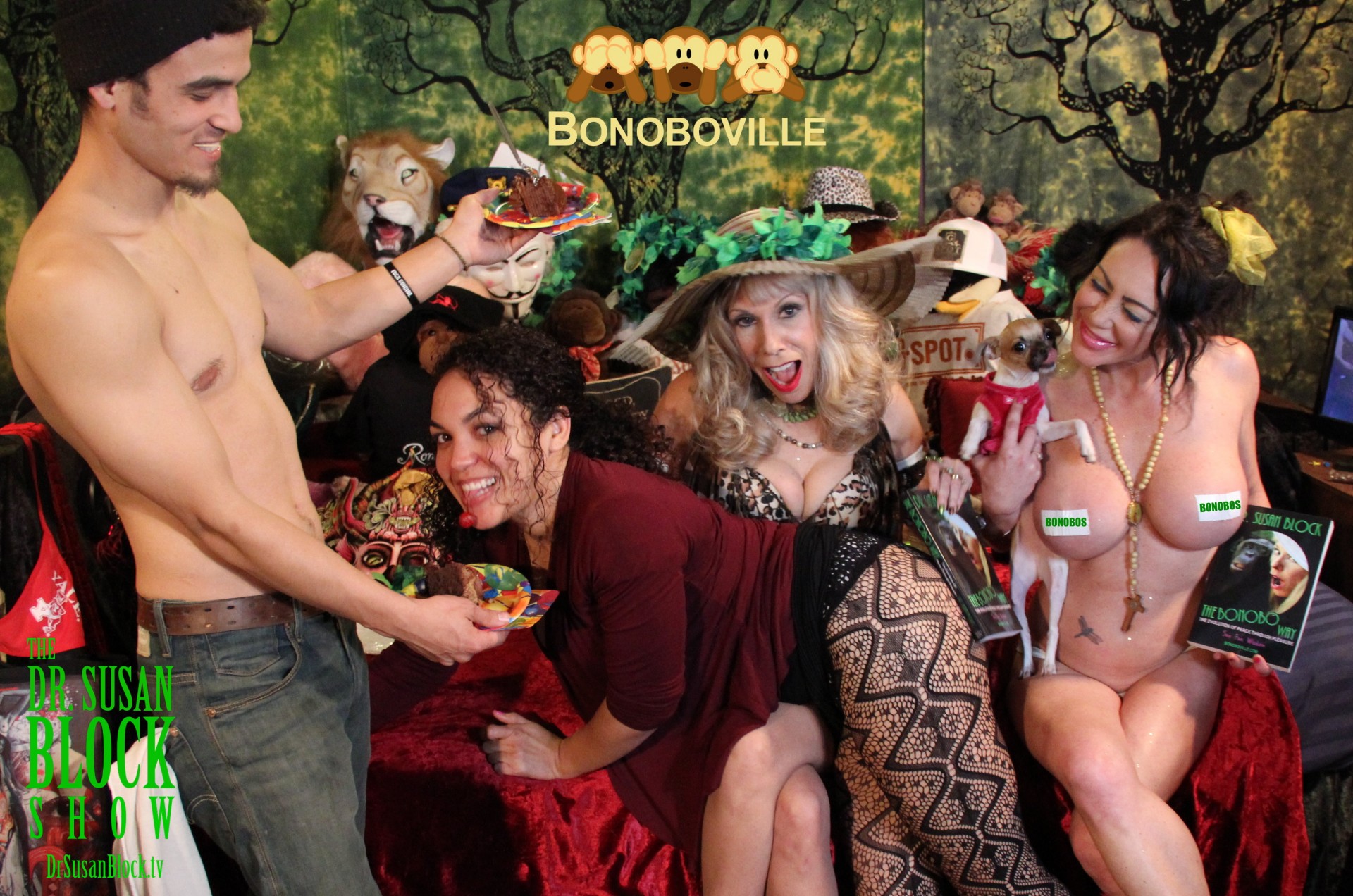 “Sex is a comedy, not a tragedy,” said art historian Camille Paglia in Vamps and Tramps, though according to my recent Google search, I’m known for popularizing the phrase more than Dr. Paglia is for coining it. In any case, it hits the nail on the throbbing mushroom head of this show. 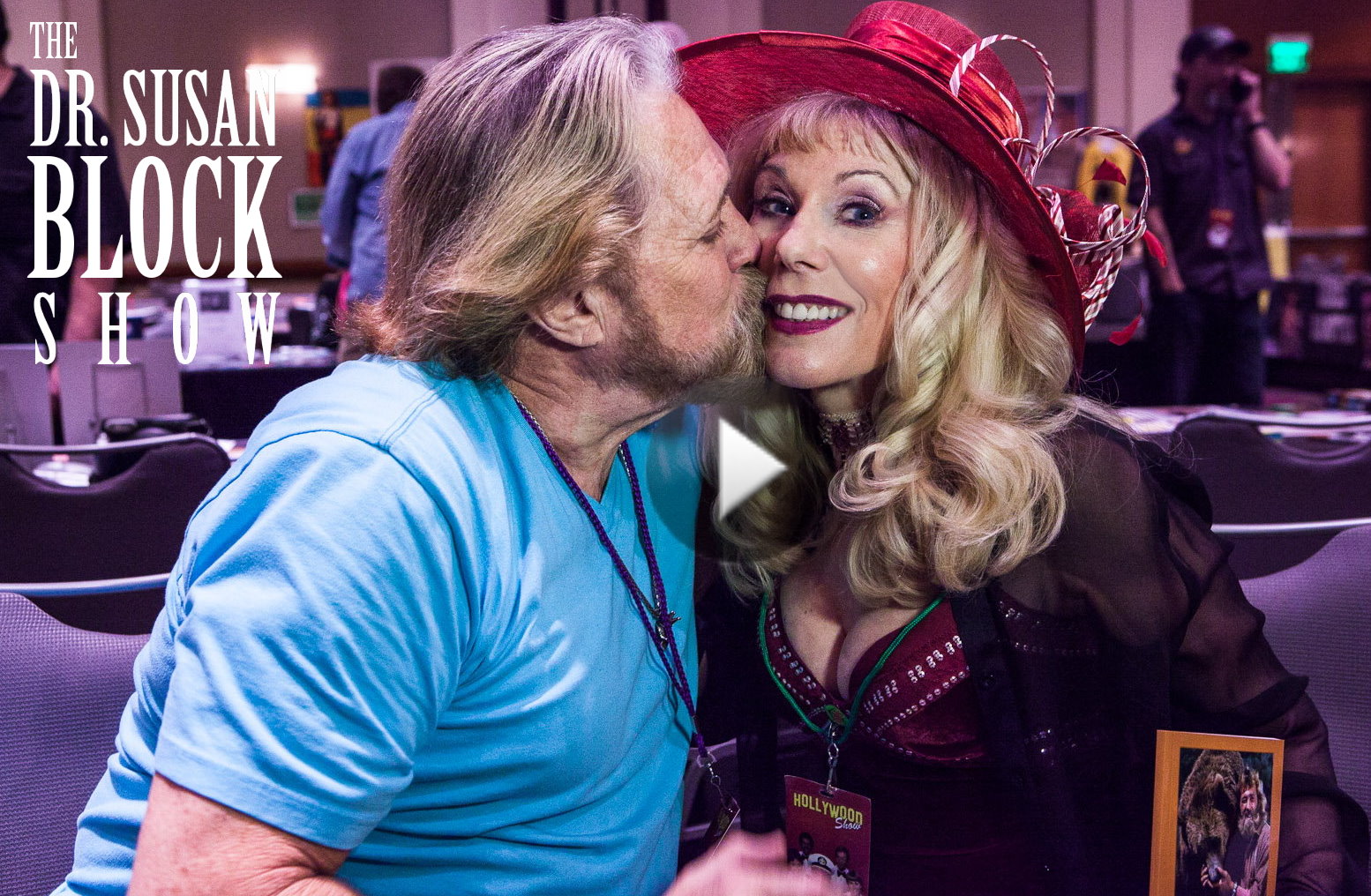 So before we frolic into the comedy of sex on this melancholic midwinter’s night, Snake Eve in hand, we talk about the tragedy of death, Thanatos, as the Greeks called this force of murder and war, which has, in modern times, encompassed cancer and environmental destruction as well as more murder, mass-murder and war. In comparison, Eros, the Greek word for the sexual energy that drives all of life on Earth, is pure comedy, or maybe a farce of worldwide proportions. 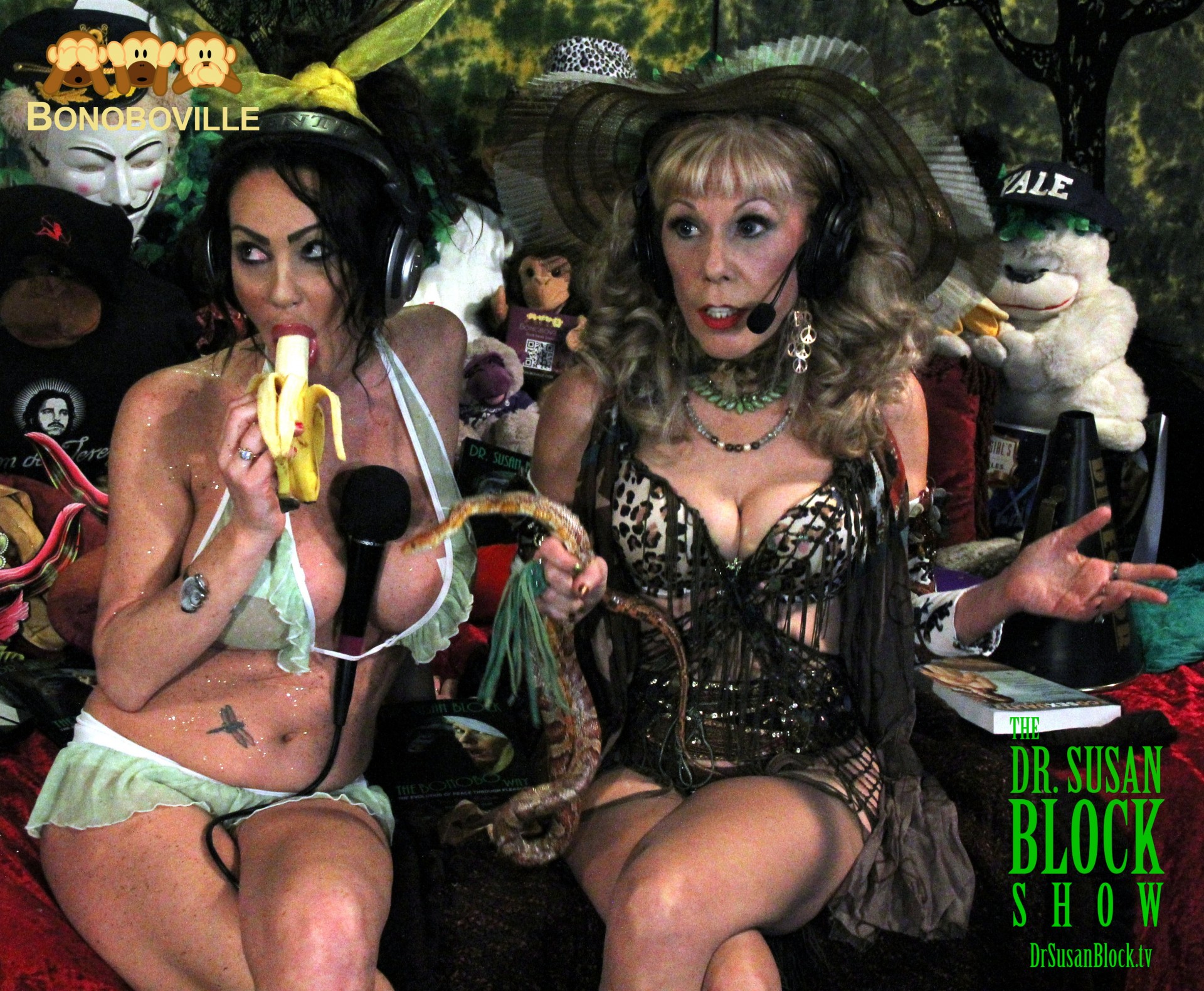 After such sad farewells, we need a good laugh and my first guest, stand-up comic, Joan Rivers joke contributor and Hollywood Rockin’ Wrap Up host Jason Hadley, does the job. I must confess I feel a schoolteacher’s pride in her student, since Jason watched early episodes of The Dr. Susan Block Show (when I was on public access and HBO) at a very impressionable age and apparently, it made quite an impression.

He explains that he was especially impressed with some oral sex lessons I gave using my Wondrous Vulva Puppet, specifically the intensely pleasurable cunnilingual technique of lightly squeezing a very wet clitoris between your index and middle fingers while licking and sucking the little “man in the boat” until “he” explodes like liquid pop rocks in your mouth. 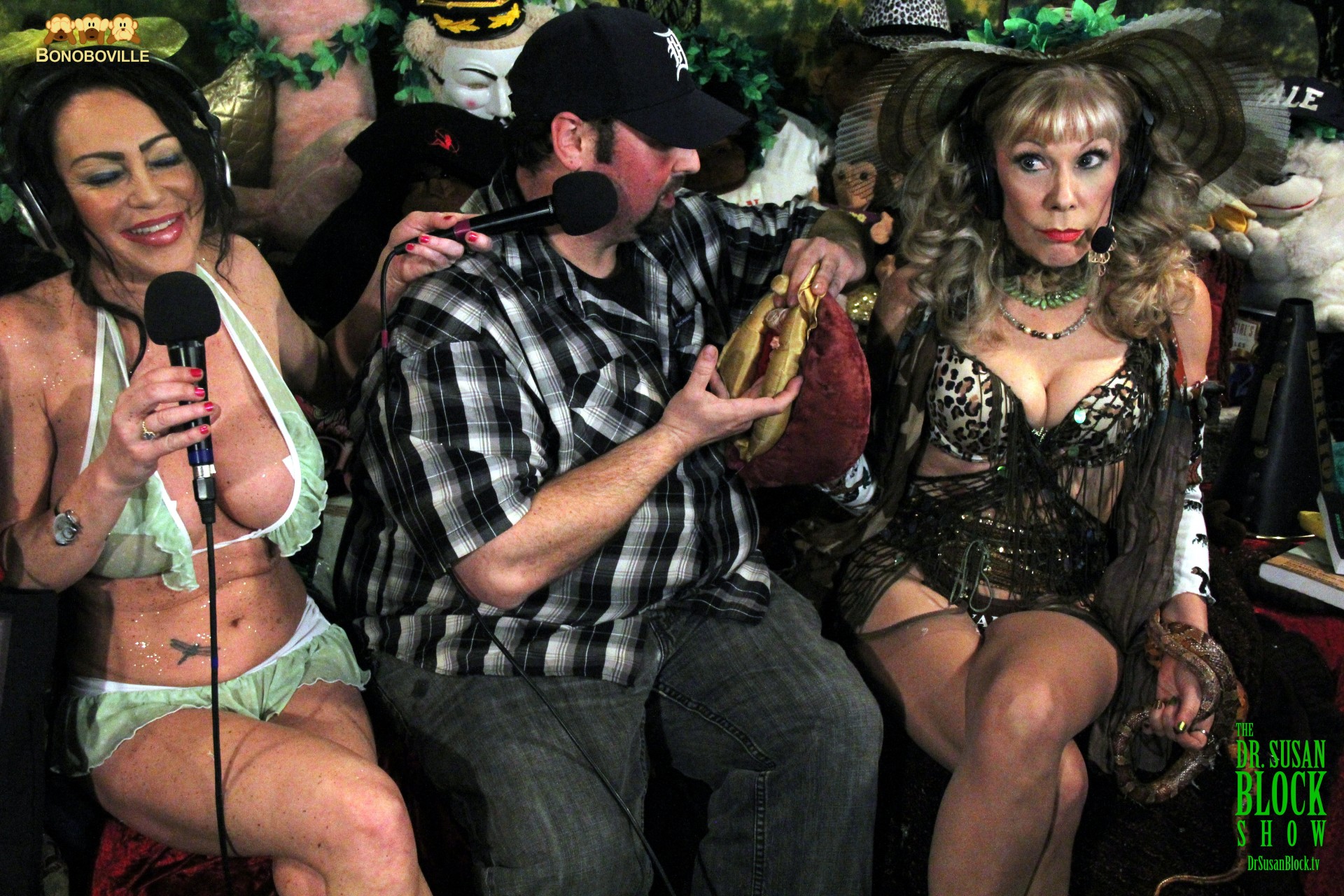 Jason never forgot these oral teachings—which now seem rather commonplace and “vanilla,” but were rather esoteric when I was teaching them back in the 1990s—and his girlfriend is extremely grateful. He even demonstrates the technique as well as G-spot stimulation on one of my current Vulva Puppets as I hold it. If a puppet could squirt, this one would! 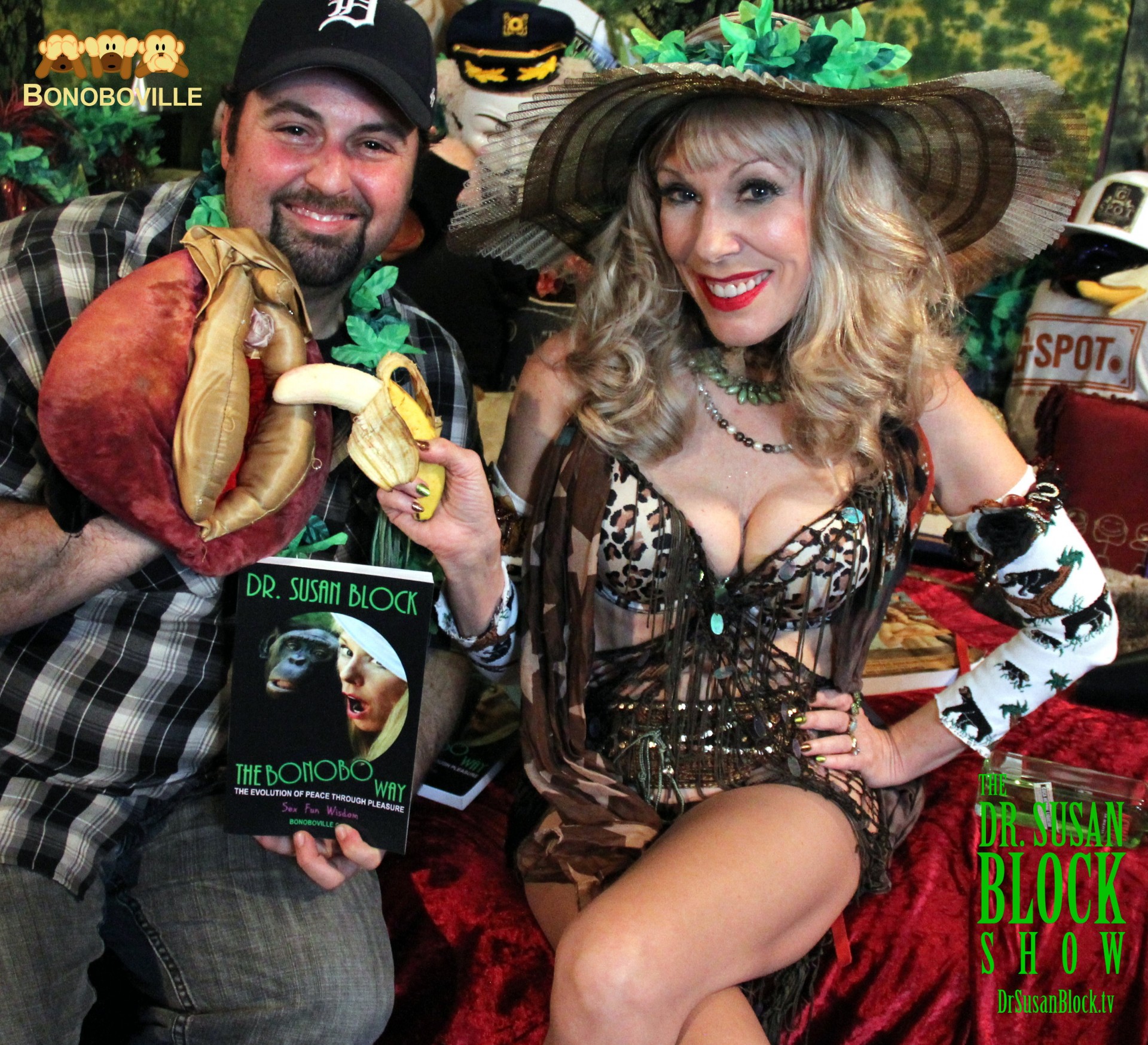 His reward for a lesson well-learned is Bonoboville Communion with the fabulous Dayton Rains—award-winning porn star, webcam and phone therapist with the Institute, and associate producer for DrSuzy.Tv—as “altar girl,” a role that she plays so well she won the SUZY award for it. Usually, the guest picks the body part to use as the altar, but with his girlfriend watching carefully but indulgently from home. “She understands that it’s just business,” Jason explains. Nice work if you can get it. Nevertheless, the faithful boyfriend requests that I take charge and choose the body-part-of-communion for him, perhaps so the GF can see that he has “no choice.” 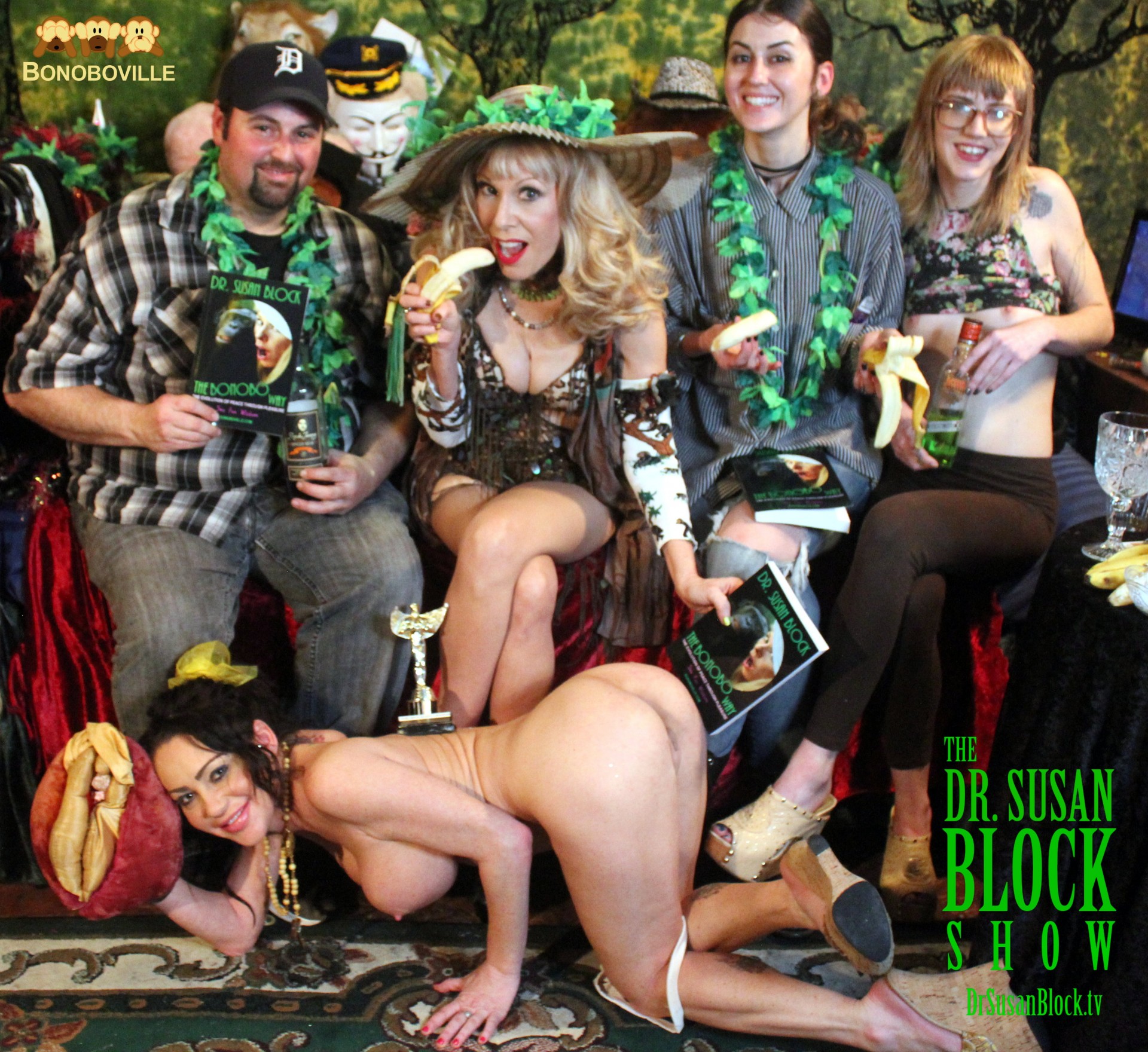 Decisions, decisions… the wrist, the back of the neck, the boobs, the butt? Yes, the butt. Considering this is a loose (very loose) take-off on Shakespeare’s A Midsummer Night’s Dream, I choose our Altar Girl’s lovely ass or bottom, “Bottom” being the name of the central Shakespearean character, a handyman and amateur actor who is magically transformed into an ass… that is, a donkey (Equus asinus asinus), though the Elizabethans appreciated the double-meaning of the “ass” word at least as much as we do.

Since Jason is Jewish (and “will feel guilty about this for hours,” he moans), I sing the Hebrew blessing, substituting Ron de Jeremy rum for wine, as he takes his Bonoboville Communion with all the reverence of a Bar Mitzvah Boy-Gone-Wild. To top things off, Jason asks me to sign his copy of The Bonobo Way to his mother whose name is “Susan.” I’m not even going to venture into what that means. I’m sure he has a comedy routine on the subject or, if he didn’t before, now he will. 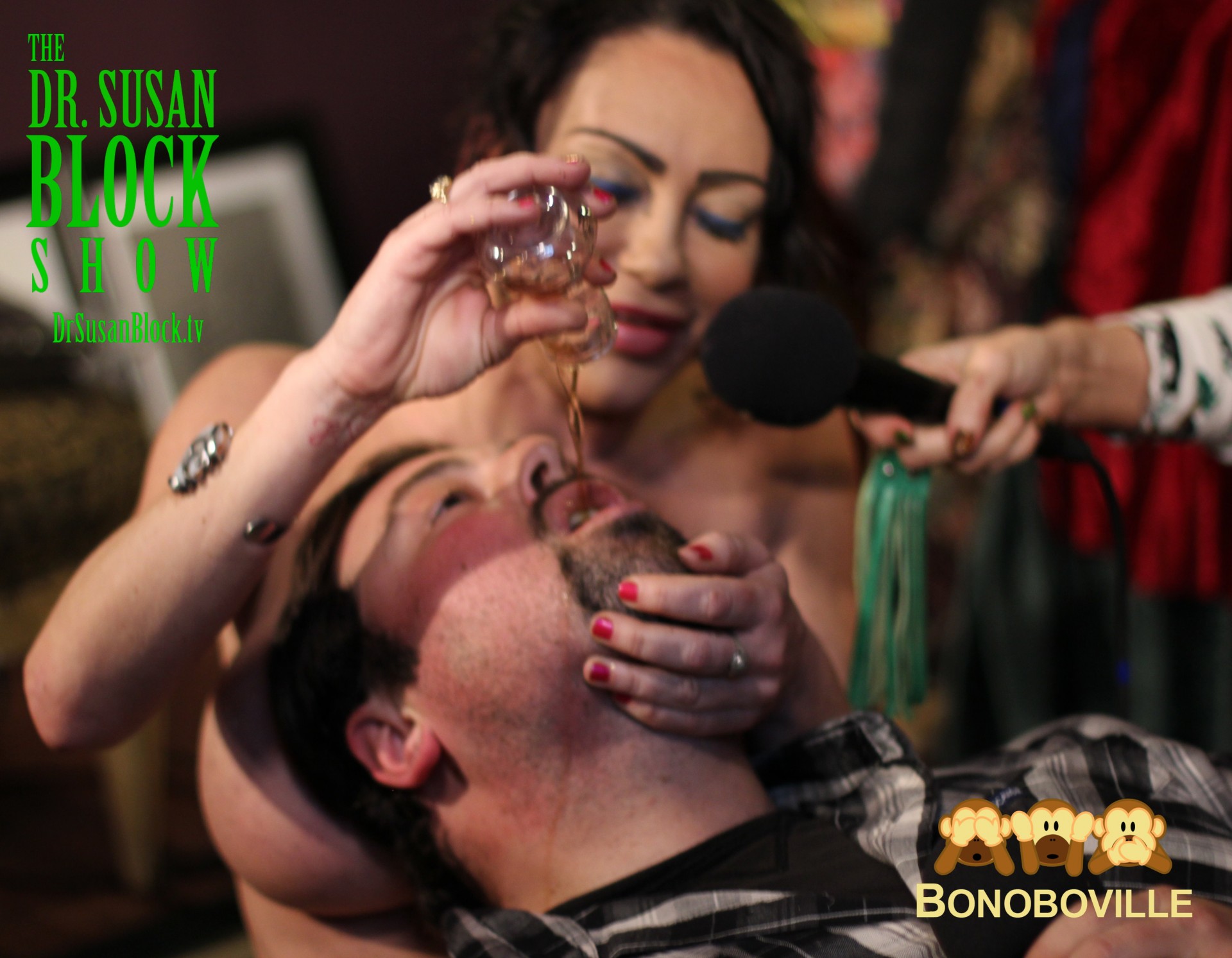 The next joke is on us because our other featured guest (who will not be named, out of respect for her otherwise excellent agency) is a flat-out no-show. This could have put us into a “show hole” but, always aware that the best laid plans may not get you laid the way you planned, especially when you’re doing the “most unscripted show on Earth,” Commedia Erotica-style, we just go with the flow and do a great show. 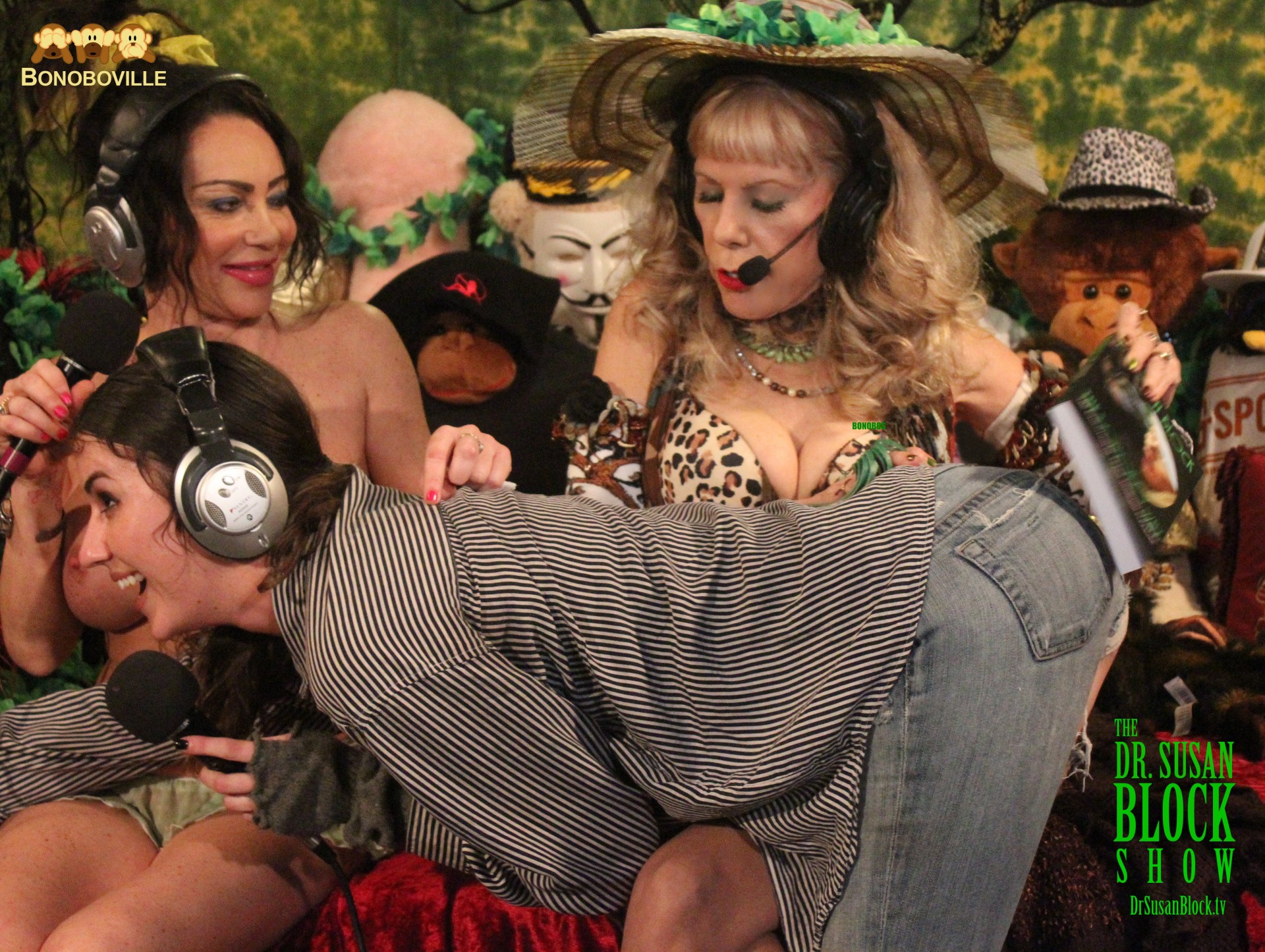 Hannah is accompanied by the perpetually mysterious adult film auteur Jack the Zipper, whom she first met in Downtown Bonoboville a few years ago. As usual, Jack will not show his handsome self on camera, but he does regale us with sexy-comic tales of Charlotte Stokely, Johnny Depp and Johnny’s particularly sweet variety of medical marijuana, christened “Honey Depp.” 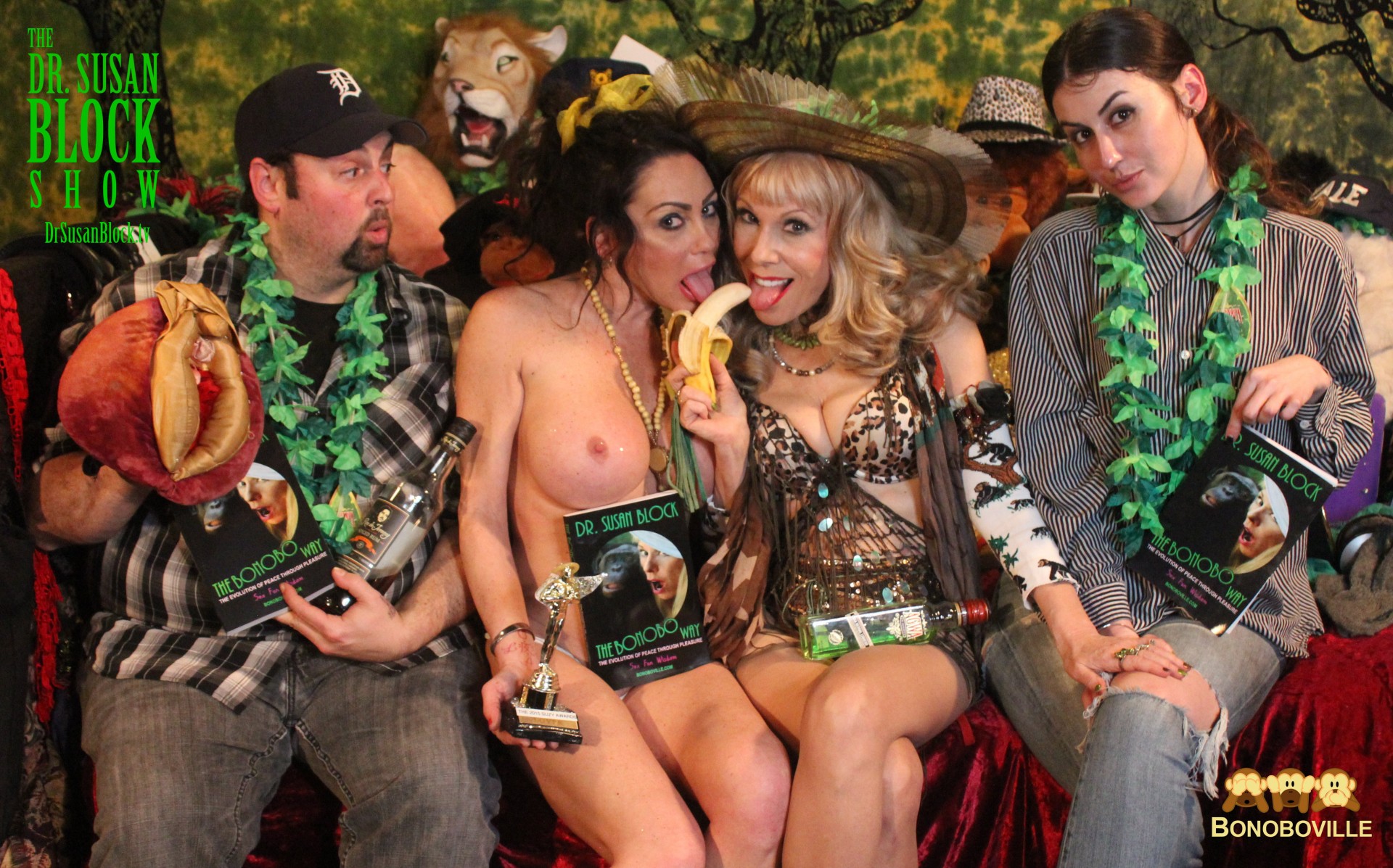 This brings us to our next Bonoboville sacred-sex ritual of reverent irreverence, wherein Dayton metamorphoses, legs outstretched, into the Goddess Venus Cannabis, legitimizing her claim to her other SUZY award for “Most Talented Twat,” aka “Best Kegels,” by literally smoking a blunt through her cunt.

Then she puffs out vagi-canni fumes to Jason, our featured guest; Jonathan, a new Studio member; me (of course) and (sort of indirectly) Capt’n Max.

Thus fortified, the Captain speaks candidly about his own personal Big C Battle, and how there is life—and sex, including some of the most intense orgasms he’s ever had!—after cancer (at least certain kinds, like bladder cancer) for some very fortunate folks like him. 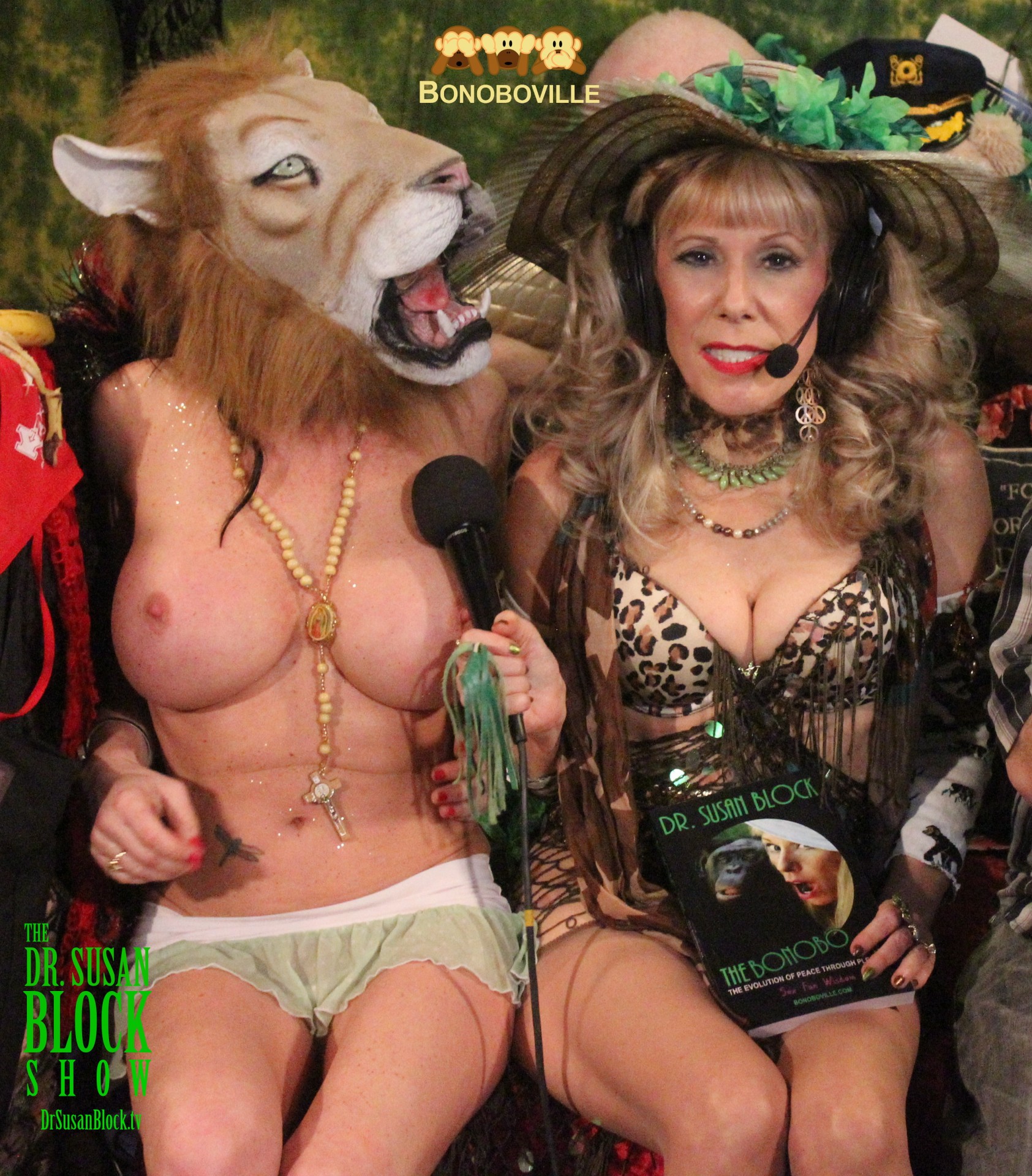 “Sex is a comedy, not a tragedy.” Photo: Cavie

Yes indeed, we are a lucky little couple bebopping along through our third show of the second Year of the Bonobo, getting ready to #GoBonobos and give the Keynote at the first Symposium on Ecosexuality in the Caribbean. Christopher Columbus invaded the island of what we now call Puerto Rico with guns and smallpox, and now we are coming to the University of Puerto Rico, Mayaguez with books and the Bonobo Way.

Which brings me back to bonobos (I always come back to bonobos) and what I call “The Bonobo Funnies” in the book. Many psychologists consider humor, even if it’s just a chuckle, a hallmark of humanity. But bonobos (pan paniscus) also love to laugh when tickled physically or mentally. Moreover, they even crack the jokes, and the complexity of their funny bones is right up there with Buster Keaton. One of my past show guests, “Champions of the Wild” filmmaker Christian Bruyère, related how the human-trained, but still quite independent bonobo, Panbanisha, put him through a comedic gauntlet before consenting to let him film her. Via computer sign language and gestures, she turned the tables on the award-winning director, directing him to dress up in a gorilla costume and pretend to scare an on-site employee. Dutifully, Bruyère donned the furry suit, then beat his gorilla chest and chased the staff member down a hill. All the while, Panbanisha enjoyed the slapstick scene from her director’s chair. Only after Bruyère followed her precise, Keatonesque directions did this demanding diva consent to his original request that she appear in his movie. I should be so smart in my dealings with Hollywood filmmakers. 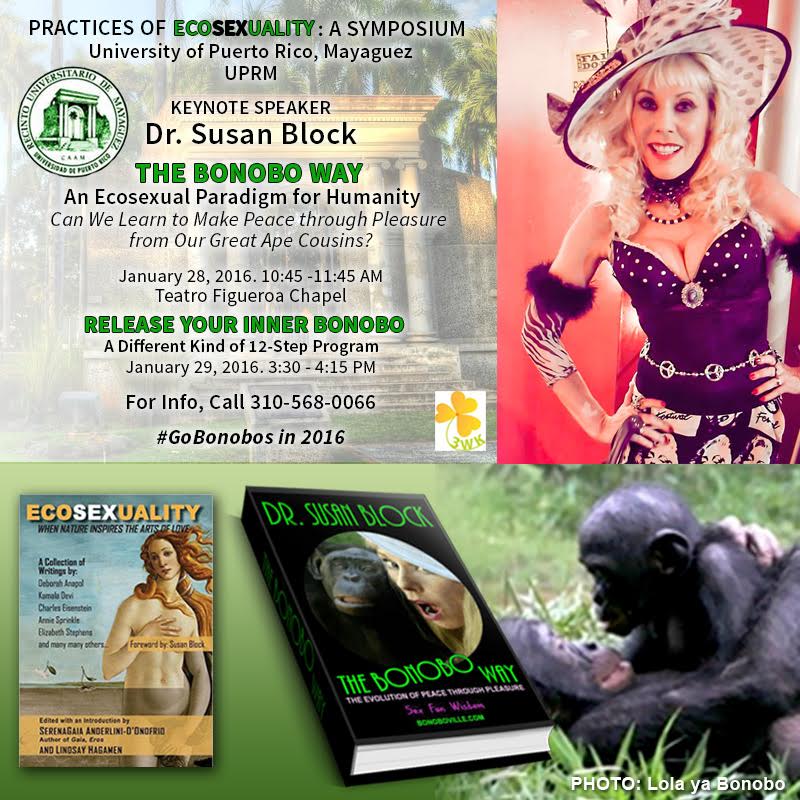 Of course, common chimpanzees (pan troglodyte) also have a sense of humor and love to play practical jokes, but the punchline is that they kill you. Haha. Actually, the common chimp kill rate isn’t anywhere near as high as the human War Machine. Hahaha. At least, individual humans do tend to feel some guilt about killing, whether it’s Catholic guilt, Jewish (gelt?), Muslim remorse or just non-denominational PTSD. This is why, in the midst of all the modern mass-murder and mayhem, I believe in the Bonobo Way.

Read it or get spanked by it!

Beautiful Birthday Gal Aaliyah Corsets is 30 years old and an hour late for which she receives her OTK birthday spanking, black patterned pantyhose stretched across her bouncy bottom (there’s that ass again!), as she eats Jake’s cake. Yes, Handsome Hollywood Jake is back. Last Saturday, Destiny Dare ate Jake’s balls. Apparently, the ladies like the taste of our Speakeasy bartender’s goodies. 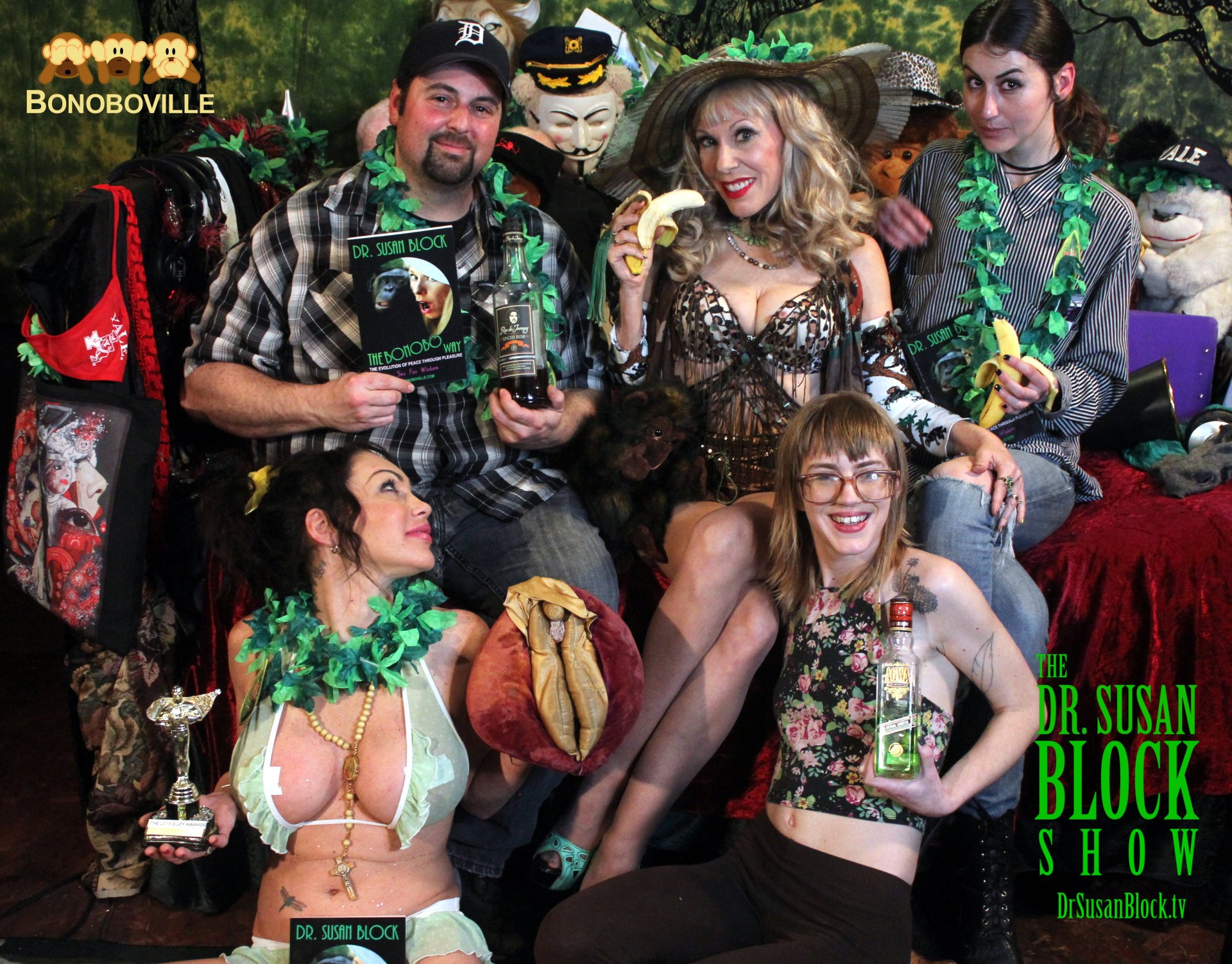 See you soon on The Island of Enchantment! 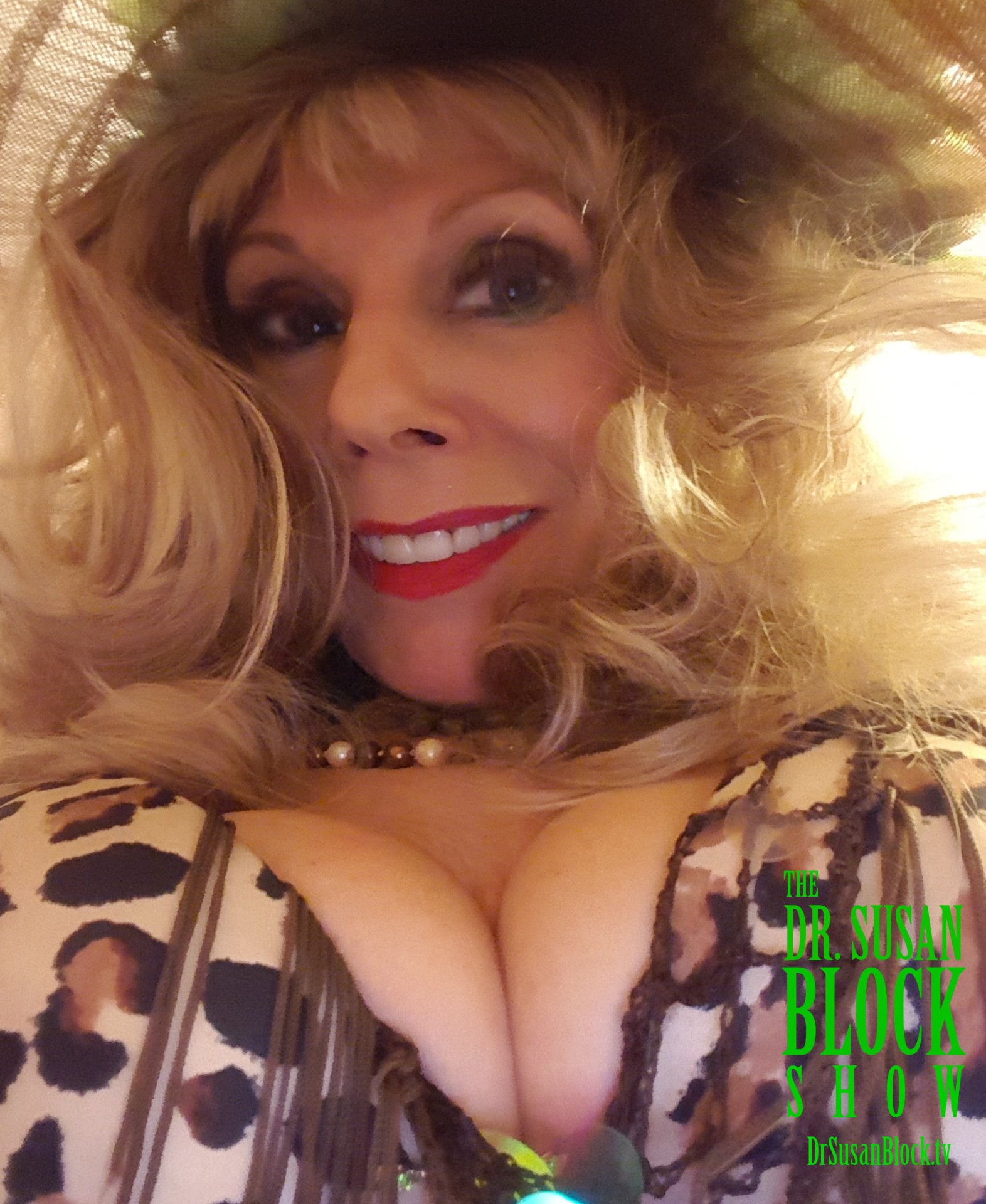 « Sex, Fun, Meatballs & Beer! » “Sushi Girl” in Bonoboville: Go Bonobos in the Year of the Monkey!