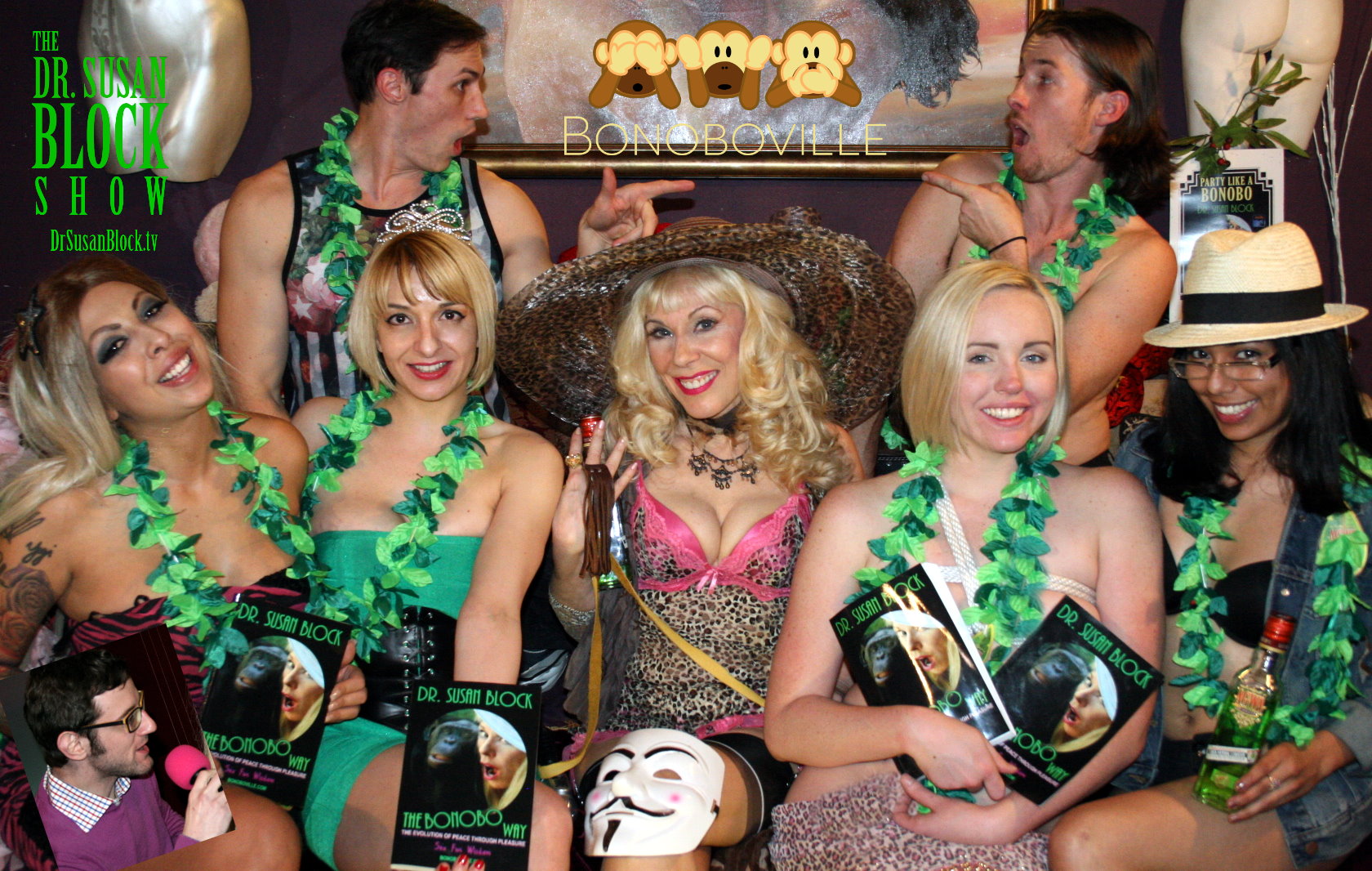 If we were really organized, we’d have Rainey squirt to extinguish her birthday candles. But The Dr. Susan Block Show has always been unscripted, which means nothing is faked, and the best-laid plans hardly ever get us laid the way we planned. Nevertheless, many do get laid (and lei-ed—thanks Agwa!) in this wild wet show and after-party, overflowing with sex, fun and wisdom.

No slouch in the “sex” department is Miley’s charming escort, Brett Ravage, a big, buff, ex-Marine who traded in his lethal weaponry for shooting the gun between his legs, which is plenty big enough to impress Size Queen Rainey so that she turns Bonoboville Communion into a double BJ, joyously sharing the job with Miley… whose tongue is as talented, in a different way, as the original Miley’s more famous oral appendage.

Accompanying the bday girl is her gal pal Jessica Shores, a.k.a., J sho, soulful and satirical rapster featured on the critically acclaimed and popularly criticized “Yeezus” album by Kanye West (can’t get away from those treacherous Kardashians) and who sings her own awesomely catchy song “Do the Miley Cyrus” (lyrics: “Do the Miley Cyrus… Spread it like a virus… We are so desirous… We do the Miley Cyrus”) a cappella as all the gals strip, twerk, tie up titties (Rainey expertly ties up Miley’s) give birthday spankings and play with the buzzing toys and lucky lucky boys. Speaking of singers, Luzer “tha Winner” Twersky, “Best Actor” in several film festivals with a crowning SUZY Award for “Best Pick-Up Artist,” announces his new career as a Yiddishe Yodeler, but that’s just a teaser. It’s Miley, Rainey and Jessica’s night to sing.

We even take a few moments away from ourselves mid-show to ogle Jessica’s video, featuring none other than our good buddy Ron Jeremy as well as Rainey and our favorite human sex-pretzel Amanda Blow. Then the four-chick-two-dick party continues, Dark Phoenix homing in for a Miley May lap-job, after which Miley is transformed into the Goddess Venus Cannabis, her shaved-bare yoni opening up to receive the Pussy Pipe as members of the Bonoboville congregation, one by one, come to smoke and worship at the fragrant altar between her spreading legs. Watch this scene, look at Miley May’s eerily familiar facial features, and it’s not difficult to imagine the real Miley Cyrus in this deliciously compromising position.

That’s some of the sex and fun. But what about the wisdom? Before we get freaky, we give props to our bonoboësque sisters in Code Pink for confronting former U.S. Secretary of State Henry Kissinger in the Senate like a collective human “Wrecking Ball” with his long and devastating record of war crimes (remember “Agent Orange”?). Then, inspired by Miley culture, I question my guests about their personal experiences with slut-shaming, and out pours a stream of emotional stories. Listen free above to hear these riveting tales of being slut-shamed, painfully and sometimes publicly (even in front of the so-called “slut’s” own children!), and how each woman copes with the slut-shaming that comes her way, usually from her closest family. I think we should honor sluts like we do studs, with more admiration than condemnation, and with affection and humor rather than contempt and scorn. The word “slut” is the female equivalent of the word “stud.” It’s about time we considered them equal.

Slut-shaming is pervasive throughout many human cultures, from Sinead calling Miley a “prostitute” on the Internet to the Taliban dubbing Malala an “obscenity” as they shot her in the head. The hate is nothing new, as provocative females have been slut-shamed to death since Cleopatra killed herself to avoid being paraded as a “whore” through the streets of Rome. One important difference now is that neither Miley nor Malala have killed themselves, apologized or shut up and tried to pretend to be good, subservient, little hypocrites. In fact, they are increasing their power and influence in women’s education (Malala) and smart-ass superstardom (Miley), even as they crush their would-be slut-shamers to the moral equivalent of dust. And, though not quite as famous as M and M, this show’s guests also do their best to lead creative, meaningful, vital, honest, sex-positive lives, which is really the best revenge against those jealous, slut-shaming haters.

Still, most of humanity has a ways to go before we can say that being called a “slut” is as prestigious and sex-positive as being called a “stud.” If we really want to learn to honor female sexuality, we should take a lesson from the bonobo females who refused to be slut-shamed and who practice a very interesting form of prostitution, as well as the art of seduction. Sluts are celebrated as much if not more than studs in Bonoboville. And to that we in our human Bonoboville say Amen… and AWOMEN.

What a superlative show and after-party! Even better, all these great orgiastic guests—Miley, Rainey, Jessica, Brett, Ron Jeremy (whom Jessica in Ohio mid-after-party just to confirm!) plus our own DP and Maya—will be back, in full force to celebrate VALENTINE/LUPERCALIA with us next Saturday! RSVP now to join us on this sure-to-be-unforgettable night of collective romance and adventure.

© February 1, 2015. Susan Block, Ph.D., a.k.a. “Dr. Suzy,” is an internationally renowned LA sex therapist, author of The Bonobo Way: The Evolution of Peace through Pleasure, occasionally seen on HBO and other channels.