Capt’n Max, a.k.a., Pr. Maximillian R. Leblovic di Lobkowicz di Filangieri, was born at the Vatican Hospital in Rome, on November 8th 1943. At the tender age of seven, he and a horde of other deposed royal families of Europe set sail on a big beautiful ship, eventually arriving in the Great Promised Land of Montclair, New Jersey. There he grew up to be a truly revolutionary publisher of such titles as The LA Star, Love Magazine, Hate, God, Finger, Meetings with Remarkable People, The Brentwood Bla Bla, Beverly Hills, the Magazine and many more, pioneering the first “reader-written” media which exploded in the Internet Age, becoming the behemoth we now call “social media.”

Max at age two, painted by a nun.

Then one fine day in L.A., Max met me. The story of our almost 30-year romance deserves a holiday of its own. Suffice it to say, we fell in love, got married, fell more in love and, instead of starting a family, we started Bonoboville… and fell even more in love.

And Bonoboville surrounds us with even more love, as well as pleasure, art, music, communal ecstasy, RƎVO˩ution and plenty of fine alcohol and other mild intoxicants as we celebrate Capt’n Max’s inspirational life and good times. We begin with Max telling us his story, which really deserves a 20-part mini-series of its own (at least), but he manages to squeeze a few highlights into the first part of this show, riveting the Womb Room congregation with his tales of parodying Angie Dickenson (and overturning criminal libel law), mentoring Annie Sprinkle, being part of a family of revolutionaries, including Gaetano Filangieri, an ardent reformer who consulted with Benjamin Franklin, and much more.

For his birthday last year, I gave Max The Bonobo Way (the “present” being that I finished the damn book so we could get our sex life back!). Thus it’s also the one-year anniversary of the launch of The Bonobo Way: The Evolution of Peace through Pleasure, now with over 30 5-star reviews on Amazon! It’s been an amazing bonoboësque year, which I will take other bloggamies and shows to explore, though I do have a shout-out, a special bonobo hoot of love, for Dr. SerenaGaia Anderlini D’Onofrio who, after reading The Bonobo Way, asked me to write the foreword to Ecosexuality: When Nature Inspires the Arts of Love and joined me in declaring 2015 the Year of the Bonobo.

But this is the Night of Big Bonobo Capt’n Max, the Captain of My Heart (which is what it says inside his wedding ring), and this year my gift to him is the “land yacht” in the parking lot, which is actually a gift from an anonymous Bonobo Way reader (a secret lover!): the new Bonoboville big black super stretch limo! We invade it just before the show where the broadcast bed has been transformed into a sort of “bed yacht,” with most of the Bonoboville crew decked out in captain’s hats, sailors’ caps, striped shirts, white stockings and-revealing short skirts.

Max tells his galvanizing stories as friends and fans approach the Captain’s Chair with gifts, questions and toasts to his health, courage, creativity and longevity, a walking testament to the rejuvenating effects of living the Bonobo Way. Of course, this being Bonoboville, our toasts aren’t the boring old “regular” kind, but are delivered at the climactic point of Bonoboville Communion, just after licking a nipple, a butt, a clit, a wrist or perhaps a penis, and just before downing a shot of spiced Ron de Jeremy rum or Agwa Coca Leaf Liqueur, our two favorite drinks.

The next guest is a lovely surprise, our old friend, Isiah Maxwell, a.k.a. Isiah King James IV, PR Prince of Ideal Image Models, who has been extremely busy with his skyrocketing career as one of the international adult industry’s hottest new studs, shooting in Spain and Africa (where he “sacrificed” a pig, at the request of the local tribe, before shooting a scene on their land).

Isiah is also one of the stars of Luc and Silky’s Surrogate series and his company Ideal represents one of our favorite featured guests (as well as being a webcam and phone therapist with the Institute), all dolled up sailor-style, Dayton Rains. Both Alexandra and Dayton elect to take their Bonoboville Communion off of Isiah’s prodigious member—all 11 inches. It’s the big black super stretch limo of cocks!

More toasts come forth from Jux Lii, Jack Nice, Sky and Chelsea Demoiselle (who provides the birthday balloons) calls in from “the field” to toast Max for being “a man of the highest honor and integrity… (who) had a profound impact on my life in a very positive way, and I love you dearly.”

Twerk for Me. Photo: Abe

Then late into the wee hours, on Max’s actual birthday, who shows up to pay his respects to Capt’n Max but the Mayor of Bonoboville himself, the loveable namesake of our favorite rum, that household name we’ve both known almost as long as we’ve known each other: Ron Jeremy. Ron plays “Happy Birthday” (no longer owned by the Warner Brothers Mafia!) on his harmonica and talks surgeries with Max before attempting to play “Put the Man in the Boat” with any giggling sailor girl he can catch.

And on that note, I steer my Captain, my Prince and my baby boy (he held onto Sky’s gift of a vodka-filled baby bottle much of the evening) up the stairs and past an auspicious and unusual view of Jupiter above Venus above Mars above the crescent moon over Bonoboville, to our private chambers to give him a very personal present, bonobo-style.

Happy Birthday, Captain! My love and lust for you grows stronger every day. Viva la RƎVO˩ution! 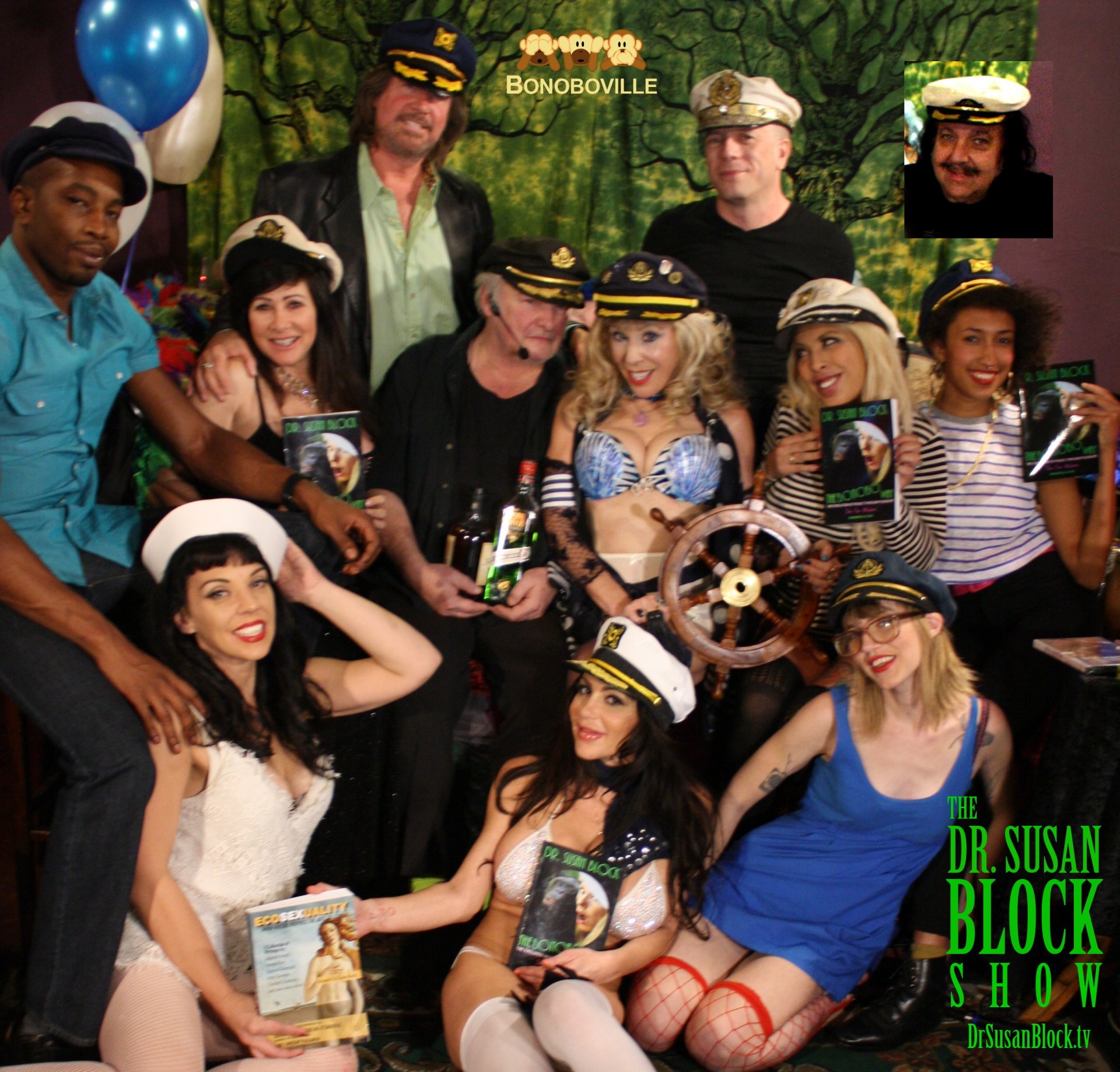