Kinky Krampus with Odette on DrSuzy.Tv 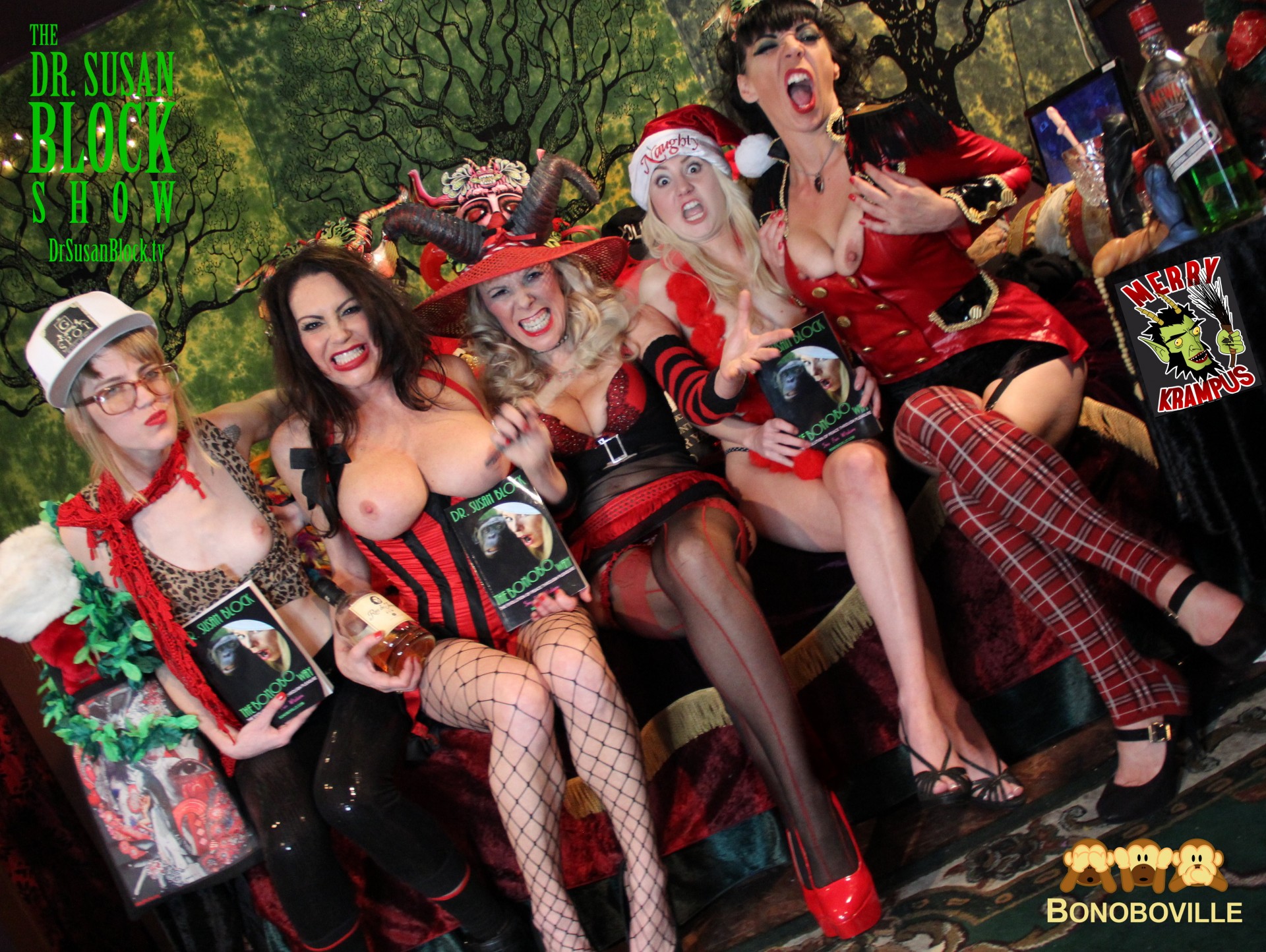 Seasons Beatings, Brothers and Sisters, Lovers and Sinners! The first Krampusnacht in Bonoboville is a raucous, racy, revelatory, spanking-hot, bonoboësque festival of KRAMPUS, the horned (and horny!) devil of medieval Alpine folklore and Hollywood movies. Krampus is the dark side of Santa Claus who looks a lot like that ancient Greek, half-human/half-goatish “God of the Wild,” Pan. While old Saint Nick brings joy and gives gifts to “nice” boys and girls, Krampus frightens, punishes, whips and spanks “naughty” children of all ages during the Xmas season, but especially on Krampusnacht, the night of December 5th, which just so happens to be when this show broadcasts live. And what better naughty woman-child (she’s 26 but looks sooo like jail-bait!) to consensually “punish” and play with than the adorable, articulate and erotically magical XxXmas Elf, Odette Delacroix.

But first, we take a minute to talk about the most recent high-profile mass-murders, which make Krampus look like an angel. Last week, it was a Planned Parenthood Clinic. The week before it was Paris. Now this week, it’s right in our own backyard: San Bernardino. The “war” has come home, my fellow southern Californians, this latest massacre of innocents brought to us by the Bonnie and Clyde of ISIS in America, “caught in a bad romance” (with a horny hat tip to Lady Gaga). “Clyde” (Syed Rizwan Farook) was a U.S citizen who apparently got radicalized and married “Bonnie” (Tashfeen Malik) in Mecca, not necessarily in that order. Then they settled down in Riverside, where he went back to work as a health inspector and she stayed home with the infant while the newlyweds legally amassed a military arsenal of assault weapons and ammunition and then went to war with…. San Bernardino?

So what’s next? San Bernardino fights back? America bombs ISIS… again? Then ISIS beheads some hapless prisoners… again? Then what? Maybe we could just shoot them with bacon-wrapped “machine guns” like Ted Cruz, and then eat them like scrambled eggs with the bacon? Then probably they return the favor, and fry our hams to a crisp with another soda can bomb. Then everybody prays to their respective God(s), as more bombs falls, and the surviving relatives take revenge and on and around we go, murder after murder and more…

There’s got to be another way. 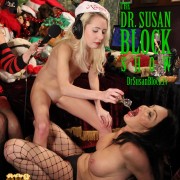 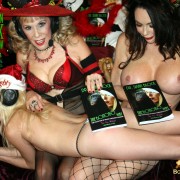 There is. At least, I think there is. I call it: The Bonobo Way… the way of love, not war, the way of peace through pleasure, erotic conflict resolution, hedonic kindness, the giving of hugs and the sharing of resources. If our close genetic cousins, the bonobos, can do it, maybe we can too. Of course, maybe we can’t. But nothing else appears to be working. Not bombing, which ironically keeps members of the Military-Industrial Complex (MIC) safer than ever, while innocent civilians—in America, Europe the Middle East, Africa and the world over—are the constant casualties of this new kind of perma-war. Prayers, however piously pronounced, don’t seem to accomplish much either. As the Daily News’ headline so succinctly screams about San Bernardino, “God isn’t fixing this.” But maybe the Bonobo Way can…

This is why I wrote the book and declared 2015, in the hopeful fog of a January 1st hangover, to be the “Year of the Bonobo,” because human conflicts destroy more than just humans, and thanks to our wars, our kissing cousins the bonobos are highly endangered. Now it’s up to us to save them from extinction, in part so we can learn from their peace-through-pleasure paradigm how we might save ourselves.

Bonobos on 60 Minutes with Anderson Cooper!

Now with over 30 5-star reviews on Amazon, The Bonobo Way is part of a growing international RƎVO˩ution in bonobo awareness and the new great ape paradigm of peace-through-pleasure. As I write this, many humans are discovering bonobos for the first time through an excellent 60 Minutes episode featuring Anderson Cooper interviewing bonobo rescue heroine Claudine André (featured in The Bonobo Way) Dr. Brian Hare, and some of the wonderful “Mamas” of Lola ya Bonobo (which we have been proud to support for over a decade, most recently with a $1000.00 donation, but more about that in a future post). Of course, the true stars of the show are the playful, lovable and loving, tragically orphaned baby bonobos themselves, as well as the wise older bonobos that Lola releases back into the wild. What a great media piece, and what a high point this is for The Year of the Bonobo. At several points, I could almost swear one of those 60 Minutes producers has read The Bonobo Way. On that note, I give thanks to Dr. SerenaGaia Anderlini D’Onofrio for believing in the Bonobo Way early on, asking me to write the foreword to Ecosexuality and joining me in declaring 2015 the Year of the Bonobo. Soon I will be joining her at the First Ecosexuality Symposium in the Caribbean, but more on that exciting news in another future post… 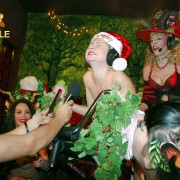 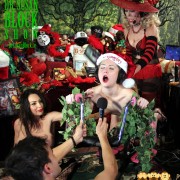 Back to Krampus festivities, featuring the ultra-bonoboësque Odette, whom DrSuzy.Tv viewers haven’t seen live since our Cacophony Society show at the old Speakeasy in DTLA. Odette is now 26, but she still doesn’t look a day past 12, especially when naked. Despite her baby face and pint-sized stature, Odette is a whip-smart, mature, poised, successful and very “selective” entrepreneur in an industry which burns out many less on-the-ball, young women. Odette attributes her recent success to her “Petites vs. Plumps” specialty series that she not only adores (for very personal reasons that she explains on the show), but it has provided her with the funds to purchase her own house in Temecula’s wine country.

Inspired by Krampusnacht, Odette strips down to nothing but her high-heeled sandals and a stocking cap emblazoned with “Naught.” She then lays across the loving laps of Dayton Rains—webcam and phone therapist with the Institute— and yours truly, Mrs. Krampus, for a bun-reddening, Bonobo Way book-spanking. Then I sign the book that spanked her and give it to her; a literature grad of Loyola Marymount University, Ms. Delacroix is sure to have some interesting feedback upon her return. 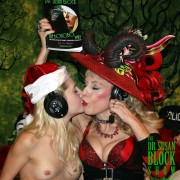 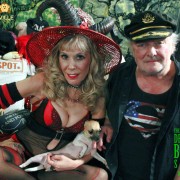 A lapsed Catholic who once confessed her “sins” of masturbation to a priest, Odette shares a beautiful Agwa-infused Bonoboville Communion with Dayton, who looks like an xXxmas present in a red and black striped corset, as she hungrily licks Odette’s bald pussy “altar” like its plum pudding. The old Popes and the Nazis both expressly forbade Krampus depictions which were quite popular in the late 19th and early 20 century, with adults sending each other’s children postcards featuring monstrous, child-beating Krampuses. Post-war Krampus became more interested in sexy naughty ladies, rather than kids, and that’s the Krampus I prefer to represent as I book-spank and birch-slap Odette, Dayton and DrSuzy.Tv show producer Biz Bonobo, a.k.a. Elizabeth Aston, who is decked out for Kinky Krampus in a latex crimson military-style jacket and fetching plaid lederhosen.

The Season’s Beatings continue and the Krampus-cranked fun climaxes with Odette climaxing, quite loudly and with great fanfare, as she rides the ivy-wrapped Mad X Bike (with a Glyde America cruelty free, all vegan condom covering the Hitachi), attended by Dayton, Biz and Ikkor the Wolf, as I book-spank her naughty bottom. As a capper, she instructs her devoted, heavily breathing fan, “Masturbation Superstar,” to (as I often say) “shoot the gun between his legs.” She “pulls the pin on the grenade” of his desire, and he comes for the cheering congregation, also quite noisily, for a grand orgasmic finale to an all-around fantastic show. 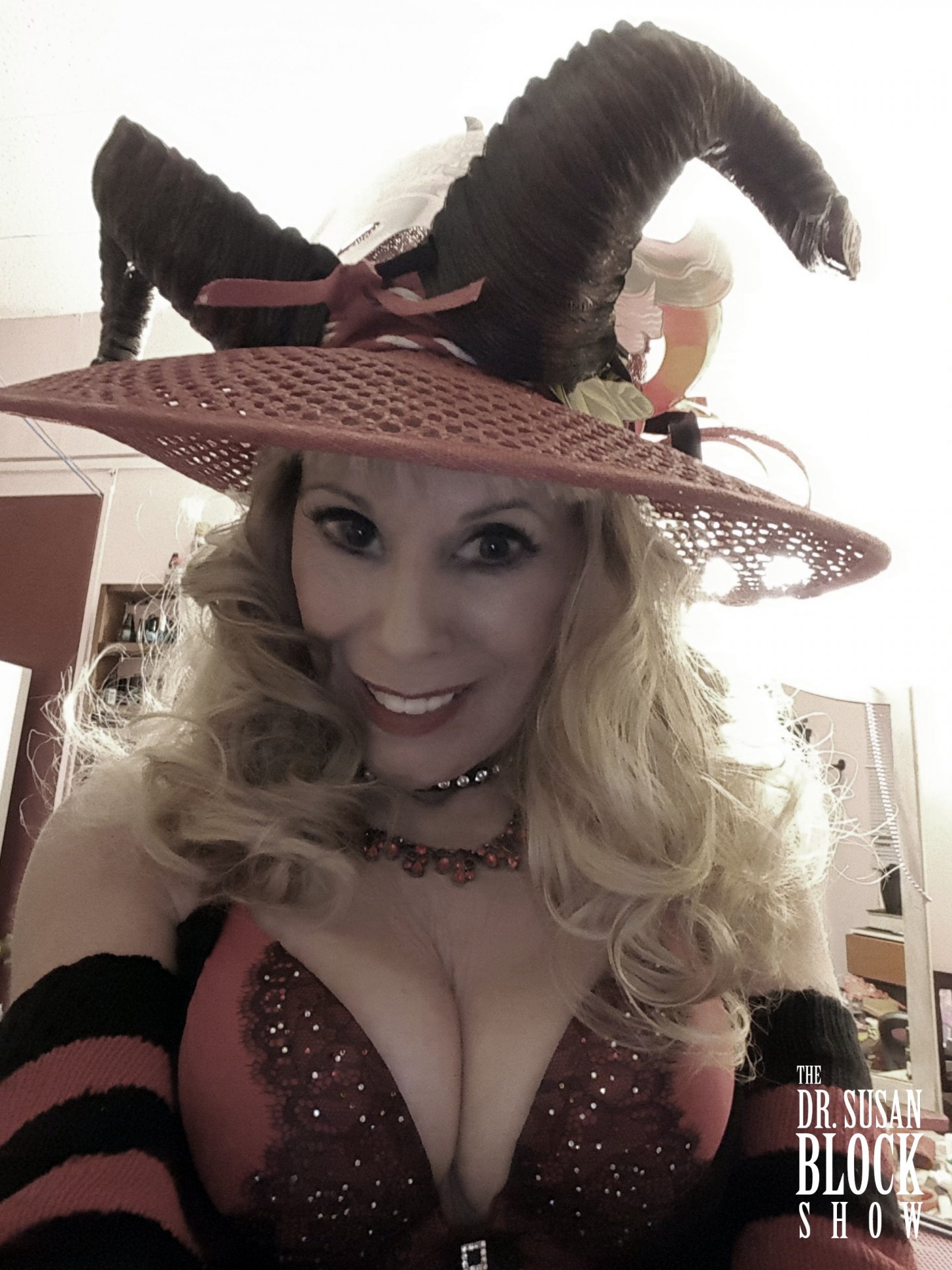 Our private lovemaking is extra-charged after Krampusnacht. Like Tashfeed and Syed, we’re a couple with a passion, though ours is a different kind of revolution, The Bonobo RƎVO˩ution. Instead of machine guns and ammo, we carry vibrators and dildos. Instead of veils and black camouflage, we wear lingerie and captain’s hats. We too are a couple (and though we’ve been married over 23 years, thanks to a little bit of luck and the Bonobo Way, we feel like newlyweds fairly often) that wants to effect social change, but instead of death and destruction, our mission is to spread peace through pleasure.

In the midst of murderous violence on all sides, erupting from disturbed, though not necessarily “crazy,” individuals, couples, religions and, of course, the great antiquated war machine, the MIC itself, there is an oasis of peace through pleasure that we can reach if only we heed the lessons of our bonobo brothers and sisters.

Of course, sometimes pleasure involves a little bit of pain (no killing though!), which is one reason we love Krampusnacht! Kinky Krampus, Merry Xmas, Happy Hanukkah, Good Ramadan, Cherry Kwanza and (since I’m probably leaving some upset religion out) Happy Holy-Daze. Peace on Earth. Pleasure for All. 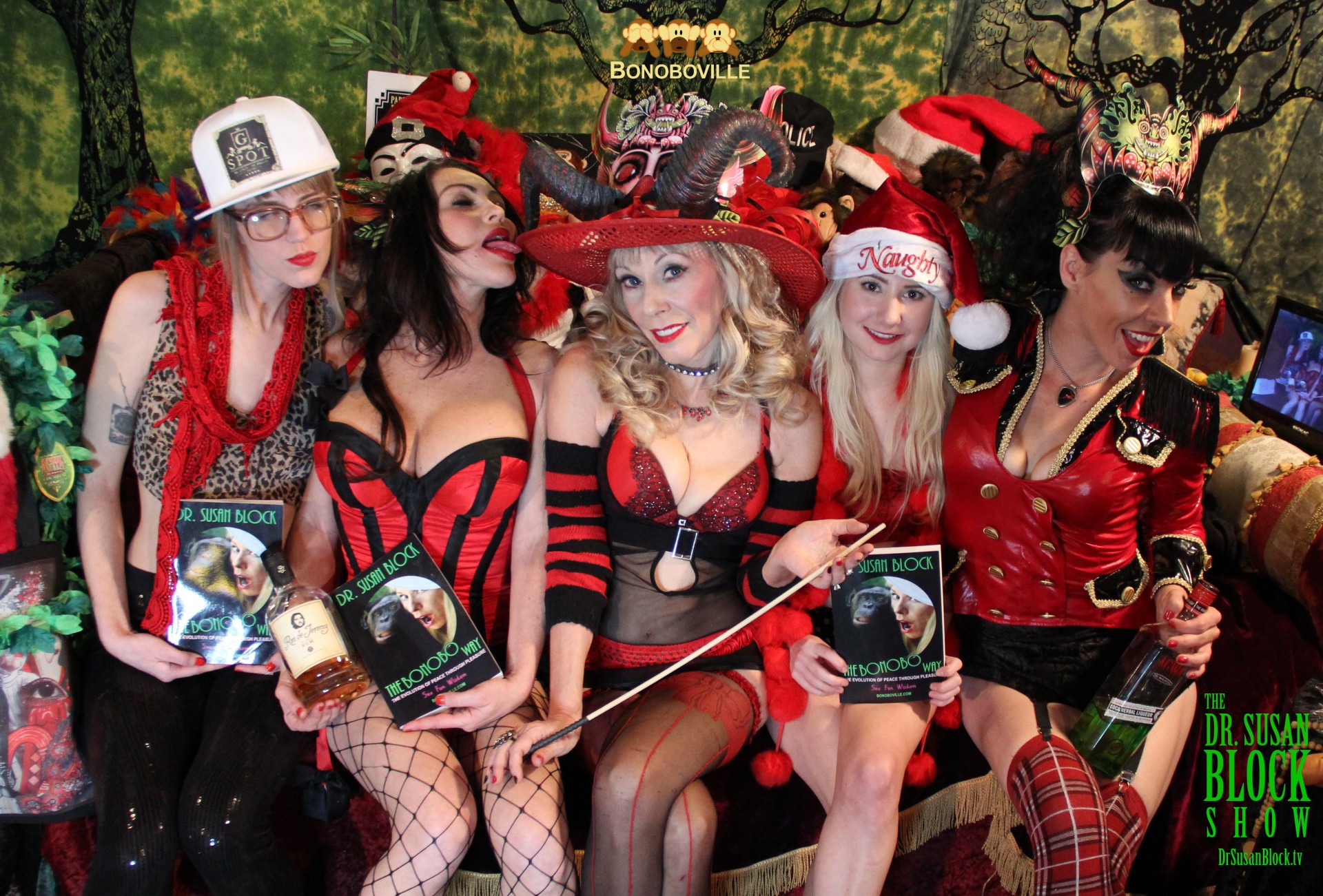 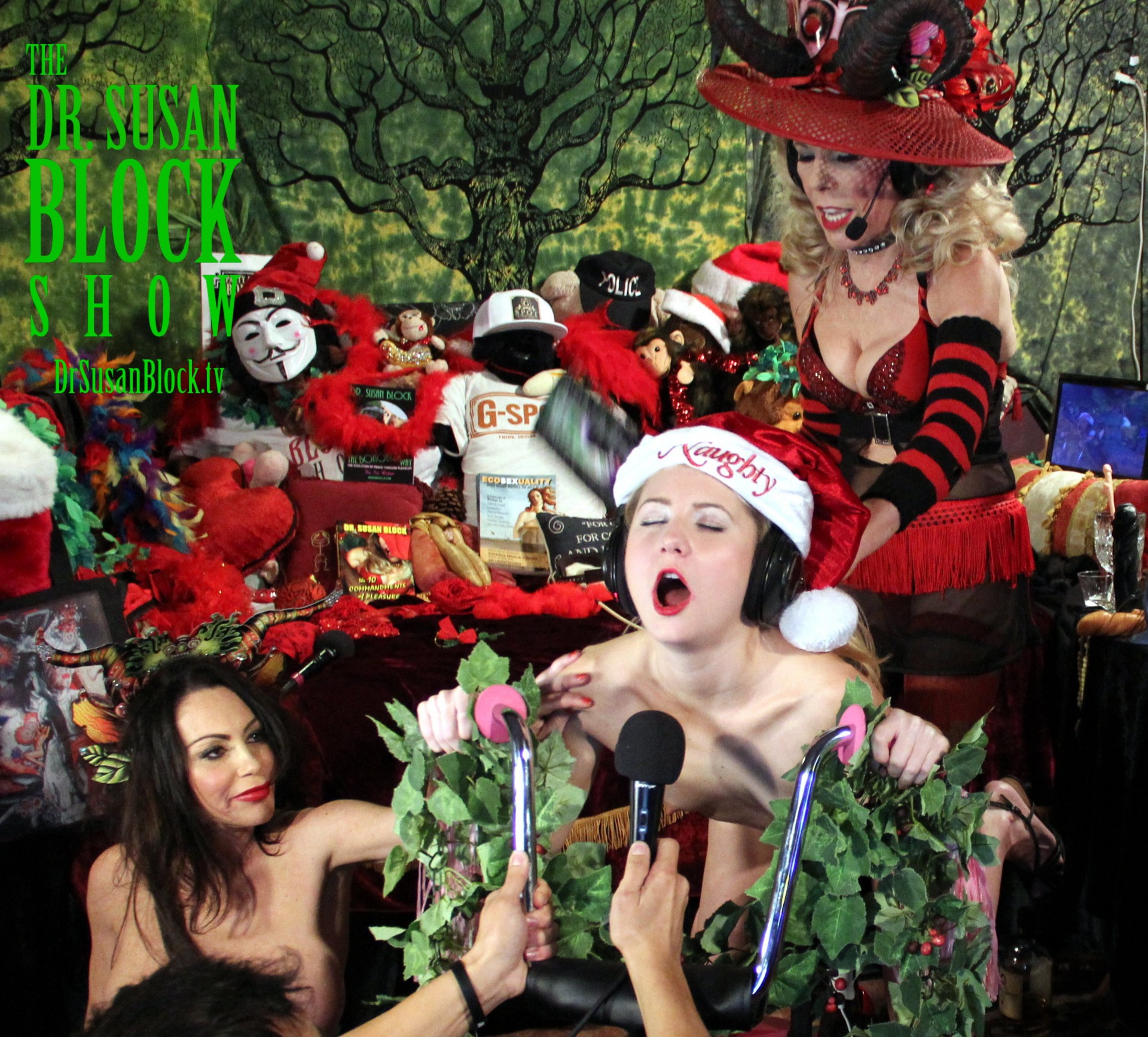