Bonobos in The New Yorker, Speakeasy in the Mist

Bonobo Bashing in the New Yorker

When I first fell in love with bonobos in the early 1990’s, none of my acquaintances knew a bonobo from a bonsai tree. Now, these amazing apes, who swing with each other as well as from the trees, have become rather famous. 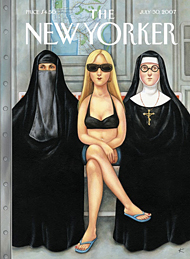 The New Yorker on Bonobos

Of course, with fame comes defamation. So I wasn’t surprised to see Ian Parker gently but firmly attempting to deflate the bouyant, mystical aura of the bonobo in the esteemed pages of The New Yorker, subtly deriding the work of some of the bonobos’ best friends in the human world, and hinting ominously that his article would be debunking the central ideas of what I call “The Bonobo Way.” These include the notions that 1) bonobos engage in various, rather elaborate forms of pleasure sex, not just reproductive sex, 2) they do not seem to deliberately murder or make war on members of their own species like common chimps and humans do, and 3) females wield considerably more power than in other primate species.

Parker does provide a fascinating, sometimes breathtakingly descriptive look at the daily life of a bonobo researcher in the Congolese Rainforest, as well as a comprehensive overview of bonobo primatology politics. He is particularly telling when he writes “The challenges of bonobo research call for chimpanzee vigor, and this leads to animosities,” including, I would add, the strong, almost vicious desire to debunk one another.

But in the end, Parker’s article debunks nothing. He gives a few examples of bonobos committing acts of violence, but not murder, at least not with any real evidence. No one has ever said bonobos are angels, just that as primates, they are relatively peaceful. They have never been observed engaging in calculated murder or organized warfare such as has been observed in common chimps and, of course, humans. Parker’s piece doesn’t include anything even approaching a bonobo war party. Interestingly, almost all of the examples of violence mentioned in the article are perpetrated by females, buttressing the notion that females rule, at least in certain vital areas of life in Bonoboland.

Then there’s the sex. Most experts agree that bonobos tend to combine food-sharing and sex. This is one reason why Japanese Primatologist Takayoshi Kano got to observe so much sex and sensuality among bonobos in the wild: he fed them. Gottfried Hohmann, the primatologist “star” of Parker’s piece who takes him into the Heart of Darkness, doesn’t feed the bonobos. Both approaches seem to be legitimate ways to gather information, each having its pros and cons. When you feed or “provision” bonobos, they’re a lot more likely to hang around you, engaging in intimate activities. When you don’t feed them, you’re not influencing their behavior so much. But they’re also not so inclined to get near you, let alone have sex in front of you.

They’re also more likely to catch and kill their own food. After all, they’re hungry! Wild bonobos must be especially famished since their rainforest home has been decimated by constant human warfare, bushmeat poaching and the logging industry. The stress of all this ecological devastation and the reduction of their normal food supply, as well as constantly seeing their family members and friends being violently slaughtered by hunters, must have a traumatizing effect on the bonobos still left in the jungle, just as polar bears have lately been turning to cannibalism because longer seasons without ice keep them from getting to their natural food. It will be illuminating to hear from Hohman when he finally publishes papers on his recent discoveries in the wilds of war-riddled, ecologically damaged Lui Kotal. But the observations he has made thus far do not negate the earlier, pre-war findings of Kano and others.

By the way, I had never heard from any of the experts that bonobos were vegetarians. Kano had reported that bonobos occasionally eat meat of other species, like we do (actually, a lot less than we do). 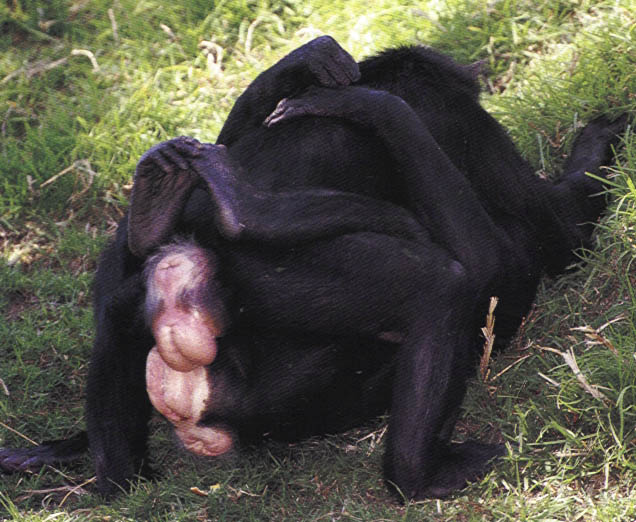 Not Sex? Female Bonobos do the Hoka-Hoka, a.k.a. GG-Rubbing Photo: Franz Lanting, from Bonobo: The Forgotten Ape

Hohmann’s oddest observation is about female bonobo “g-g rubbing,” genito-genital rubbing, “hoka-hoka,” or what Parker refers to as “frottage,” when one female rubs her swollen vulva against the vulva of another. Hohman and his team have observed this numerous times, as have many other primatologists. “But does it have anything to do with sex?” Hohman asks and then answers himself, “Probably not.”

Since when is rubbing engorged genitalia against your partner’s engorged genitalia, often while embracing, French-kissing and/or having what looks like an orgasm, not “sex”? Is Hohmann limiting his definition of “sex” only to intercourse? That is hardly appropriate for a creature that is known for engaging in sex for pleasure (including what we might call “bisexuality”) more than reproduction.

Hohman goes on to wonder why “the males, the physically superior animals, do not dominate the females, the inferior animals?…It is not only different from chimpanzees but it violates the rules of social ecology.”

Well, it doesn’t violate The Bonobo Way. As Kano, Franz de Waal, Amy Parish and other primatologists have observed: bonobo males appear to be more docile than chimp males (or even than bonobo females), in part because they remain under the calming influence of their mothers until they die. And then there’s the fact that bonobo males get a lot of sex from those so-called “inferior” but sexually aggressive females. That’s right: Peace through pleasure. Good sex diffuses tension. And you can’t very well fight a war while you’re having an orgasm.

Hohmann appears to be a meticulous scientist. But no matter how “objective” you try to be, the human personality still shines through the researcher’s conclusions. While Kano’s image is one of gentle collaboration, Hohmann’s is one of “chilliness,” being “very difficult to work with.” Parker writes about an incident where Hohman “loomed over” a local villager “wagging his finger. ‘It’s good to remind him now and then how short he is,’ Hohmann later said, smiling.” Folks who like to throw their physical weight around in the course of a verbal debate tend to find parallels for their own bullying tendencies in nature. 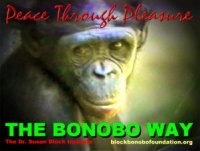 Parker’s report on Hohmann’s work is important, especially since Hohmann hasn’t published much himself lately. But the article’s implication that anyone who is inspired by the “Make Love Not War” chimps (both to save them from extinction, as Sally Coxe’s Bonobo Conservation Initiative is working hard to accomplish, and to understand and improve our own lives, as some of us try to do by following The Bonobo Way) is deluded is irresponsible and wrong. In classic New Yorker style, Parker’s critiques are measured and nuanced, even polite. His derision sneaks up on you like a quiet “chimp-bothering” primatologist. In the end, he brings no myth-shattering news that hasn’t already been published. Though their lives in the wild are, of course, more violent than in captivity (and with the destruction being wreaked upon their environment, it would be hard to blame them for turning intoa new species of primate-psychopaths), the bonobos still seem to live, relative to other wild primates, by The Bonobo Way of Peace through Pleasure.

Nevertheless, many right-leaning bloggers, including the Wall Street Journal’s gleeful headline ”Bonobo Apes Might Not Be Politically Correct, After All” and Jack Rich’s “Shades of Margaret Mead,” are already picking up this highbrow critique of the “left-bank chimps” and running with it, referring to it as an official indictment of sexual freedom, women’s rights, environmentalism, communitarianism, ethical hedonism, the peace movement and liberal thinking in general, not to mention the bonobos themselves.

I appreciate Parker’s in-depth reporting on the primatology spats and evocative writing about the Congo. I know he worked hard on this piece; he spent an hour talking to me for the sake of just one sentence. I am also grateful for the excruciating fieldwork in which Hohmann is engaged. All research on bonobos – whether Kano studying them as they frolicked in his sugarcane field, De Waal reporting upon bonobo behavior in captivity, Richard Wrangham comparing bonobos with other great apes, Sue Savage-Rumbaugh communicating via computer with her primate “genius” Kanzi, Hohman running after the bonobos as they run away from him in the thick of the jungle, or Martin Surbeck catching tree-dwelling apes’ golden showers in a lacrosse stick-like container – are worthwhile. One observer’s findings have not discounted the others, at least for now.

Bonobos are no angels. But as far as we know, they still deserve the distinguished title of the Make Love Not War Chimpanzees. Hoka-Hoka! Bonobos Forever…

We’ve been doing some awesome shows on RadioSuzy1 this month, including our radio Rebuttal to the New Yorker bonobo piece, Hookergate II, the Mythology of War, plans for my upcoming Bonobo Hotel, in-depth interviews with Paul Krassner about Sex & Politics, Mitzi Szereto on Sex & Death and Esther Perel on Sex & Relationships. We’ve also been getting some amazing calls from all over the world, from Ahmad of Mazar-i-Shariff, Afghanistan (Yes, Afghanistan!) talking about Sex & Politics in Afghan Culture and MoMo of Calgary, Canada talking about the G-Spot, the P-Spot and Male and Female Ejaculation. I feel privileged to live and broadcast my message of “peace through pleasure” in these relatively egalitarian times when in addition to a blog, anybody can have a radio show and speak out about the Facts of Life, Sex and Death with our Brothers and Sisters in far-flung, oft-besieged, exquisitely beautiful Afghanistan and all over the world.

“Are you sure that we are awake? It seems to me that yet we sleep, we dream…”
Demetrius in William Shakespeare’s “A Midsummer Night’s Dream” (Act IV, Scene i) 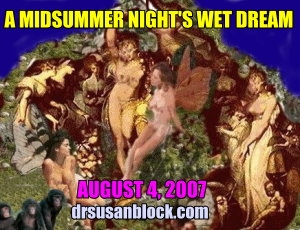 Come join me on Saturday night, August 4th for A Midsummer Night’s Wet Dream, an exploration of fantasy, a Magical Mystery Tour of your sexual psyche, the erotic world within you in the stimulating environment of Dr. Suzy’s Speakeasy in the Enchanted Forest of Downtown LA. Your wet dreams may be romantic, orgiastic, tender or wild. Since many fantasies involve revolution, turning the status quo on its head, they can also be quite shocking….But don’t be afraid; it’s only a dream you are in. Even if you wake up wet. Even if you have to sleep on the wet spot.

So come one, come all, or just come, join the collective ecstasy, swing through the trees like bonobos chimpanzees, discover the sexual magic in your life, roleplay your fantasies and live your dreams at Dr. Suzy’s Speakeasy. Check out our special guests and if you can’t be here in the flesh, you can always enter our dreams through Joining Backstage. But if you can possibly spirit yourself to the Speakeasy, make your reservations now.