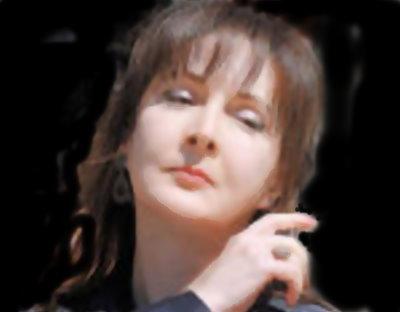 Ding dong, the DC Madam is dead
Hanged from the rafters of her mother’s shed.
Hide under yer covers, Ye Dicks and Ye Johns!
Ye Senators and Prosecutors, Ye Media Cons!
There’s blood on yer hands, though you pretend to be clean,
Ye’ll always be haunted by the Ghost of Deborah Jeane…

The D.C. Madam wasn’t sentenced to death by hanging, but she might as well have been.

On May 1, 2008, Deborah Jeane Palfrey, a.k.a. “Miz Julia,” a.k.a. The D.C. Madam, appears to have hung herself in the tiny shed next to her mother’s trailer in Florida. Of course, foul play is well within the realm of possibility. All of the Johns and Dicks she serviced, including apparently, U.S. V.P. Cheney, covered their guilty dickheads and looked the other way, as police, prosecutors and judges vilified, harassed and condemned her, turning her into a “red meat” sacrifice for the sadistic entertainment of the Religious Right in the Coliseum of the American Media. These Dicks, Johns and Political Buttheads, including at least a couple of war criminals, certainly were capable of having such an inconvenient woman killed, even if they didn’t actually pull the noose, as Geraldo Rivera and others are suggesting, in this case.

Seems high-profile hangings are all the rage. Saddam last January, Madam in May. 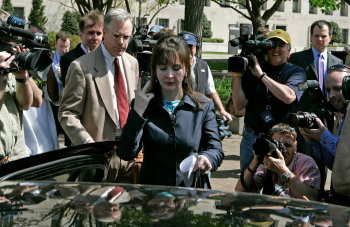 She was hanged, like the Witches of Salem were hanged. Some of those witches may have been hookers, or just lustful women who “tempted” the eyes of men away from God, proof of their hypocrisy. Her elderly mother found her corpse on the First of May, Beltane Day, one of the four High Sabbaths of the traditional witch’s calendar.

Most of the evidence points to suicide, including handwritten farewell notes and the word of confidants, like Dan Moldea, who claim she often said she’d rather die than go to prison, not to mention the difficulty (though not impossibility) of pulling off a quiet murder like that in a trailer park. So there will be no further police investigations into the life and death of the D.C. Madam or her famous and infamous clients. Case closed.

Whew! You can hear the sighs of relief echoing through the Beltway Halls of Power and Sanctimony, and in the joyless bedrooms of the Potomac, as the guilty cringe under their covers with their families and their homilies and their attorneys.

Woo-Woo! You can also hear another sound, the haunting moans of the Ghost of Deborah Jeane, spectral white with death black hair and a blood red mouth, holding up her Little Black Book like a Bible, condemning all her condemners as accomplices to her execution. 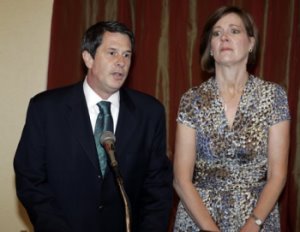 U.S. Senator David Vitter, R-La., and wife Wendy (who looks like she just saw the Ghost of Deborah Jeane)

First, there were her Johns and rumored Johns: Harlan “Mr. Shock and Awe” Ullman, former U.S. Deputy Secretary of State Randall “Pizza Lover” Tobias, Louisiana Senator David “The Serious Sinner” Vitter and Dick “The Prick” Cheney, among others, whose names we may never know, but who know who they are.

May your silence in the face of her suffering for your sins shame you for the rest of your lives.

Dick was one of her johns

Then there were her prosecutors, led by the Good Christian Witch Hunters, Assistant U.S. Attorneys Daniel Butler and Catherine Connelly. Following in the footsteps of Ken Starr and Tomás de Torquemada, they fingered and bullied Palfrey’s former escorts into testifying against her, forcing them to expose their most private moments, making them answer questions like “what if you were menstruating?” Butler and Connelly succeeded in ruining at least a couple of women’s careers in the process, including a U.S. Navy officer, but never touching the Senator or Veep whose numbers were found so conspicuously on the D.C. Madam’s list.

No doubt Butler and Connelly had an “easy” target in Palfrey who seems to have naively assumed that if she never spelled out “SEX” when she arranged for her clients to meet with her “subcontractors” (even having the ladies sign contracts saying they weren’t having sex with her clients), that she wasn’t breaking any laws.

They couldn’t get her on prostitution, or even tax evasion (apparently, Madam or not, this good citizen paid her taxes!). So Butler and Connelly got a jury to convict her of “racketeering” and money laundering, forcing her to face up to 55 years in prison (though presumably she would “only” have to serve about 71 months). They did this despite or maybe because of the sickening sexism of Counselor Butler’s closing arguments, “When a man agrees to pay $250 for 90 minutes with a woman, what do most men expect in that time? In that context, it’s pretty clear. Most men want sex.”

Oh, aren’t you clever, Mr. Butler? You too, Ms. Connelly! You wasted the tax payers’ money on a small-time broker of the exchange of cash for pleasure between consenting adults, and you managed to drive your victim to her death! Take pride in your cleverness as the image of her dead body hanging from the rafters swings through your conscience for the rest of your life. Your only salvation is resignation.

But of course, these assistant witch hunters won’t resign. They’ll get promoted, the D.C. Madam’s innocent corpse just another rung to step on as they climb the ladder to success. 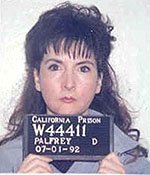 She had been in prison before

Though I blogged a few words in her defense, I feel badly that I didn’t do more for her. In the much publicized lead-up to her trial, I wrote satirically about “Hookergate” and the hypocrisy of her two-faced Tartuffian johns. Her trial went unusually quickly, then suddenly she was convicted, and then, the news of her awful death, hanging from a nylon rope in her mother’s storage shed with suicide notes in her bedroom. I couldn’t help but break down in tears when I eulogized her on RadioSuzy1.

I believe that killing yourself is almost always the wrong way out, and I do not mean to glorify her suicide (if that is indeed what it was). But there is no doubt that Deborah Jeane Palfrey paid the ultimate price. If she did indeed take her own life on the public stage just shortly after her conviction, she put a curse upon her enemies. As she placed her head in the noose, she placed a Beltane witch’s hex, upon all the ruthless and hypocritical dicks and johns, cops and cowards, prosecutors and persecutors who drove her to the noose. She sacrificed herself. Perhaps she did it to escape the horrors of prison (which she knew all too well). But she also did it, I think, to make a point, to turn what most of us in the media – both the mainstream and the blogosphere – had treated as a bit of a farce into a real-life human tragedy.

Whether she killed herself or was murdered, she died as a martyr. Her sacrifice is just as powerful as that of a revolutionary who dies defending her cause. Unlike the Catholic Church which takes 100 years to recognize a saint, we here at the Dr. Susan Block Institute and Bonobo Way are ready to canonize her now as Saint Deborah Jeane, patron saint of sex workers and persecuted businesswomen.

R.I.P. Saint Deborah Jeane. May your persecutors be forever haunted by your face, hanging from the noose.

BONOBOWAY.COM tops 100! Pop the Champagne – Amrita or Cristal!
bonoboWay has just passed the 100 member mark!  Squirt or Champagne, whatever pops your cork…

We now have over 100 registered members. That’s more naked apes than the U.S. Senate! Though I think our members have a lot more integrity. Pythagoreans considered the number 100 to be divinely divine because it is the square (10 x 10) of the divine decad (10). Now aren’t you impressed? I know, 100 doesn’t sound like much, considering Myspace’s 100 millions and Facebook’s gazillion, but we’re more about quality than quantity anyway. And we are off to a joyous start, bounding up the trees to see what we can see. 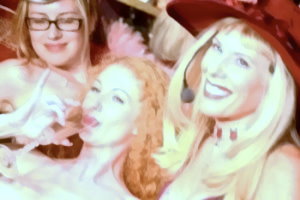 One of the things that makes BonoboWay so special is that it’s by invitation-only. But you can request an invitation to join. We make it a little tough to get in, to keep out the bots and jerks, but once you’re in, you’re in (unless we kick you out). Once you’re in, you can also invite your friends to join you in communication and creation of our paradise in the trees. May our bananas and coconuts be fruitful and multiply. Let’s keep climbing!