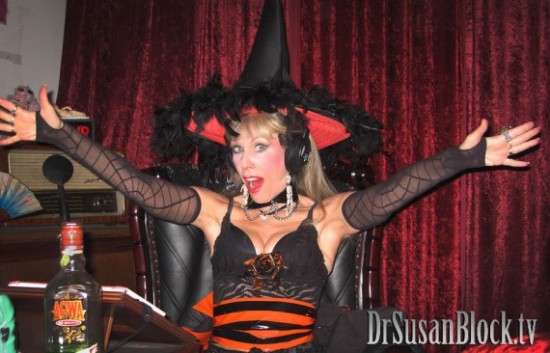 Time to Awaken,
Stirred and Shaken,
Your Heart Beating Like a Bongo,
Your Blood Rushing Like the Congo…
Maybe You Meet Someone Who Looks Kind of Scary,
A Pirate, A Priest, A Fascist, A Fairy,
When Out of the Clear, With a Flick of the Tongue,
Those Shivers of Fear Turn to Passion and Fun.
Mixing Fear and Sex Creates Special Effects!
See, What Turns Us On Isn’t Always the Nicest.
So We’re Often Afraid of Just What Excites Us.
Or Are We Excited By That Which We Fear?
Both, My Dear…
It’s Biological…It’s Neurological…
And It Can Be Pathological.
So Be Careful, Consensual,
Practice Safe Sex, and Don’t Overdo…
And Stir This Recipe Into Your Witch’s Brew:
A Pinch of Fear Gets Your Mojo In Gear,
Like Heat in Your Mesquite,
But Too Much Fear Burns Your Meat.
Stick That in Your Bag of Tricks or Treat!
And This Halloween or Sometime Soon,
Take A Trip to The Moon on Your Vibrating Broom
Join the Erotic Masquerade!
Don’t Be Afraid…
Your Inner Witch Won’t Hurt You,
Unless You Really Want Her To.

Speaking of fake bloody stabbings, we did the “Bloody Wallace” scene on my couch for Canaan Brumley’s Speakeasy movie last Saturday, and what a wild whacky scene it was! Sorry but I can’t say much more than that right now; top secret movie stuff, you know. Stay tuned…Also check out James Bartholet’s Adult News Flash interview with me at the LA Erotica Film Festival last month and take a sneak peek at the beautiful new 2008 Speakeasy Calendar.

Meanwhile, here at RadioSuzy1, we keep broadcasting awesome shows (listen live or check out the Radio Archives), talking with hot and cool people from Indiana to Iran, Brooklyn to Beijing. The world is shrinking before my ears, and the simple desire of people all around the globe to reach out and peacefully communicate, as well as erotically stimulate each other, through our little radio show is gratifying and humbling. Of course, despite the wonders of cybertalk, it’s always most fun to have our guests in-studio. A recent stand-out was this past Saturday’s show where I interviewed “Fuck the World” stars Natalie Minx, Jade Starr and Arachnia Webb about factory sex, horseback riding, bondage, caning and forced orgasm, after their wild shoot with Jack the Zipper here at the Speakeasy.

What I didn’t know was that Darry Hanah is a lovely individual with a strong streak of environmental consciousness (like her namesake) and a healthy disdain for the Bush Crime Family. And she has a charming hubby of 15 years, also in “the business,” Jack Fountain. Darryl and Jack talked with us about everything from their Poly-Orgasmic Marriage to politics and religion and, of course, fountains, both male and female. Darryl says she only squirts in private, so far. If she ever makes a Female Ejaculation DVD, she’s got to call it “Splash.”

Shades of Liv Ullman and Bibi Andersson in the late great Ingmar Bergman’s seminal sixties film “Persona,” a surreal psychological horror movie. Both Liv and Bibi are two hot Scandinavian blondes who resemble each other (like both Darryls). In “Persona,” Liv is an actress who goes mute, seemingly out of sheer horror over the human condition, and Bibi is her garrulous private nurse who lives with her in a psychiatrist’s beach house on the rocky Swedish coast. Bibi and Liv nurture and torture each other, as they teasingly caress each other’s lovely bodies, generating a high level of lesbian heat. Are they lovers? Are they enemies? Are they two sides of the same woman? This was Liv’s first film with Ingmar and they were rapidly falling in love. At the same time, the director was ending his romance with Bibi, and was just emerging from a nervous breakdown. Critics have debated the meaning of “Persona” for decades, but there is no doubt that this film is quite scary and hauntingly erotic.

The eeriest moment is when Liv’s and Bibi’s faces fuse into one. This would be a simple task in Photoshop now. But in 1966, it was a cinematic revelation: two beautiful faces coming together to form a monster. Scary sex, indeed…

See you at the Hallowe’en Bacchanalia. Hop on Your Magic Dildonic Vibrating Broom and Fly, Witches, Fly! 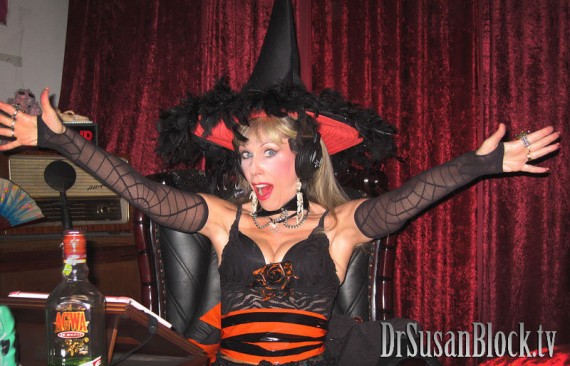