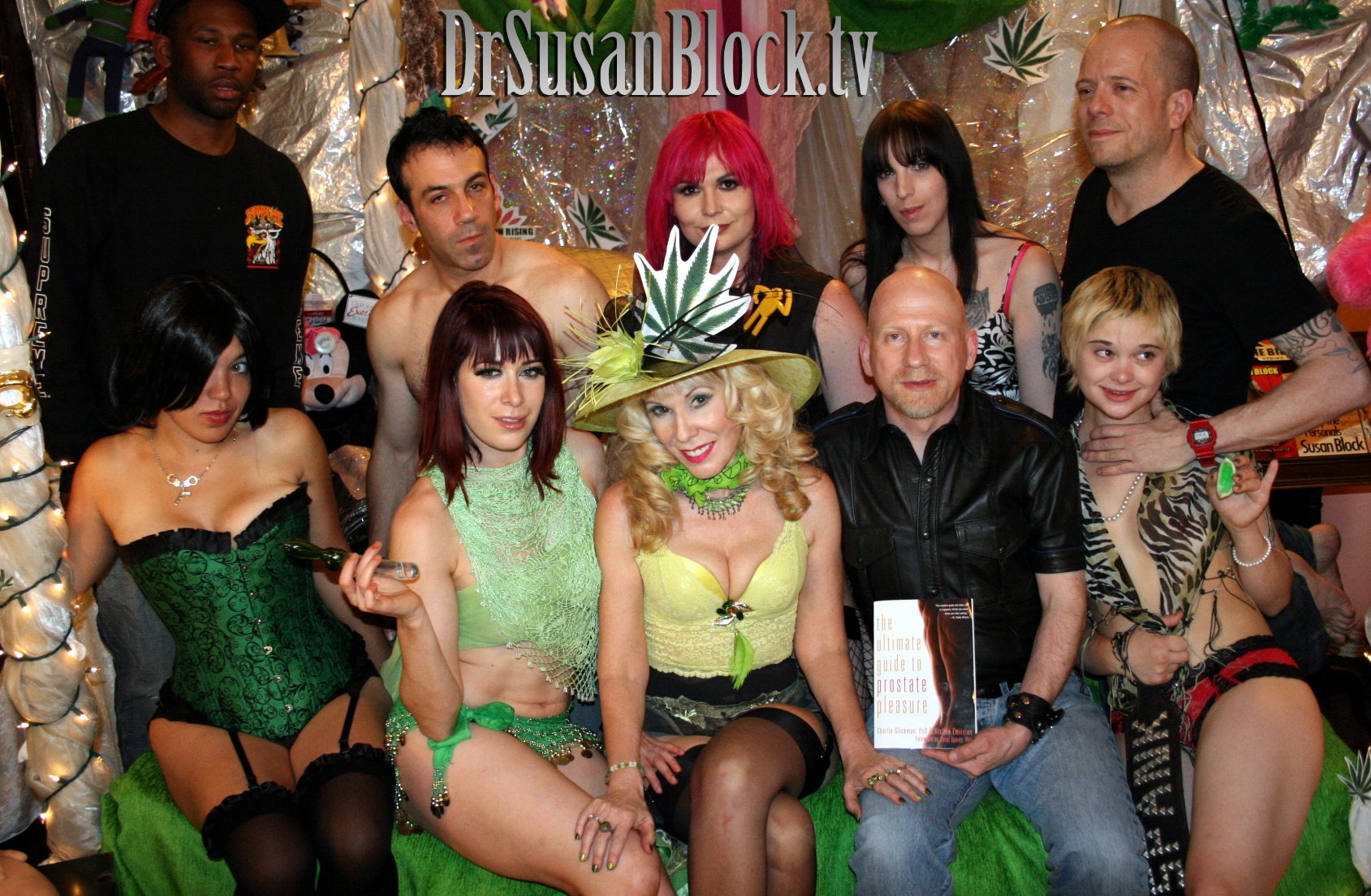 As medical marijuana use becomes more decriminalized and “normalized” in America, it’s no wonder that cannabis culture has developed its own holiday, one on which almost everybody takes a toke, even many who usually abstain.  This leads to many getting lucky in one form or another, pot being one of the few genuine aphrodisiacs. Though marijuana is NOT a gateway to harder drugs for most of us, it certainly is a gateway to sex. Usually very sensuous sex.  The only stronger aphrodisiac would be alcohol, which sometimes enhances aggression as well as libido, and that can be a “bummer,” to say the least.  As long as you’re not the type that pot makes paranoid, THC in the right dosage tends to make you pleasantly horny, helps you to really groove in the moment, the worst that can happen being that you space out or nod off while your partner’s still grooving.

Moving along to another orifice….we manage to shock and delight even the 420 experts with our marvelous Pussy Pipe, aka the Peter Piper.  More on the smokin’ hot wonders of the Pussy Pipe below (and on this show).  Boom Shiva Bombalai!

Aaliyah Corsets and Nick Morningwood: These two intrepid Dr. Susan Block Institute therapists are our first volunteers for Dr. Charlie’s prostate pleasure guidance.  Both are P-Spot virgins, and neither even had much experience—or interest!—in anal sex.  But like good Bonobovillagers, they are up for an erotic challenge and open to a new sexual experience.  But they both have a little streak of healthy exhibitionism and relish performing for the appreciative, voyeuristic Womb Room congregation.  Some high-grade 420 for 4/20 also helps loosen things up, and before you can say “Lights, Camera, Prostate!”, saucy Aaliyah, tightly wrapped in a gorgeous weed-green corset, has Nick stripped naked, his cock hard and eager for more.  Then Aaliyah dons her Measure B-compliant rubber glove, lubes it up and starts spelunking into Nick’s cave, under Dr. Charlie’s expert guidance.  Things go pretty well at first, Nick acknowledging that Aaliyah’s finger “feels good” as it searches for and finds (we think) his prostate.  But then, when it’s not as “hot” as he expected, he finds himself getting turned off.  Of course, an erection is not at all necessary for successful prostate exploration.  Some men can even climax from P-Spot stimulation without an erection.  But for many guys, a hard cock helps keep things fun.  Since Aaliyah is romantically involved with someone else (our magnificent manager!), she doesn’t “do what it takes” to keep Nick’s erection going during the P-Spot probe, so he’s not exactly blown away by the experiment.  Maybe he just needs to try it with someone who will give him all the manual and oral sex he wants during the P-Spotting.  Meantime, kudos to both of them for trying something new and helping to educate our audience.

Odile: We’re delighted to have this “seductive service whore, pain princess, and sex slave” (her own words) from the halls of Kink.com as our very special guest for the 420 Pot & P-Spot festivities. While not explicitly turned on by pain, it could be her competitive nature, honed on school athletic teams, that makes her such a fine BDSM operator, able to meet the challenge and tolerate more pain (for more gain!) than the next slave.   Redheaded Odile (last seen in the restroom with Ron Jeremy at our Harry Reems Memorial) is another non-smoker, which could get us weirded out on 4/20 if she weren’t so much fun.  Morever, she is a fantastic pussy pipe holder, stretching her athletic legs into a perfect Chinese split, as she holds the elegant glass Peter Piper between her beautiful, shaved and glistening labia.  The rest of us “line up” to smoke from her pussy pipe, like ardent worshippers in some demented but very joyful cult of Venus Cannabis.  Odile is also game for P-Spot exploration, though is also a P-Spot .  Since Odile doesn’t have her a P-Spot of her own, she volunteers to explore someone else’s, and does such a good job, she not only fingers the P-Spot, she gets her WHOLE HAND inside the rectum!  Odile will visit DrSuzy.tv more often if she gets more paying work in LA, so come on, LA producers: hire this hot chick!

Kush Collective: Kush is the man and the collective, located at 1111 S La Brea Ave, Los Angeles, CA 90019. He’s a little late, probably celebrating 4/20 over at the collective until it closed at 11pm. When he does arrive, Kush brings the Kush, making the holiday merrier than ever.  When I ask him to explain the meaning of the magic numbers “420,” he gives one of the standard replies: Some Oakland high schoolers used to meet at 4:20pm to smoke weed. Others say it has something to do with a Grateful Dead concert in Marin County, or maybe San Rafael.  Typical stoner story.

Jux Lii: Happy 40th Birthday to DrSuzy.tv photographer and maker of fine JuxLeather floggers, crops, paddles and other kinksterphernalia. When you’re the birthday boy, you get to put down your camera for a minute to have Bonoboville Jello Shots (created by Jello Shots LA) preceded by salt sucked off the pert nipples of a hot blonde who also sucks off yours.

Livia Godiva: This is the hot blonde, a pixie who pirouettes onto the Womb Room and doffs her hat, top and pantyhose, like the 4/20 Angel of Venus Cannabis.  We’re happy that her hair isn’t as long as Lady Godiva’s or it would cover the lovely little bod that she displays so fetchingly.

Bella Bellucci: This gender universal 2012 Tranny Awards Nominee is a devout 420ist.  She gets a front row seat for everything—right in front of all the P-Spot action and right next to the Kush. And she gets a toke on the pussy pipe from between Odile’s glorious gams.  Bella indeed!

Fawnia: Our Naughty Realtor doesn’t talk much on the mike this show, but she looks so gorgeous in her hot pink cocktail dress, contrasting nicely with everyone else’s ganja green, that I just had to give her a shout-out.

420 Is Now a Major Holiday, Rising 420 Enthusiasm, Pot Is An Aphrodisiac, Chocolate is What You Have Instead of Sex, The Male Prostate, The P-Spot & The G-Spot, Female Ejaculation, History of 420, Bonobos Probe Their P-Spots, We Have To Say “No” Not Only To Guns Now But to Explosives, Women Have a G-spot While Men Have a P-spot, Great Expectations, Male Sexual Squeamishness, Bonobos Act Stoned 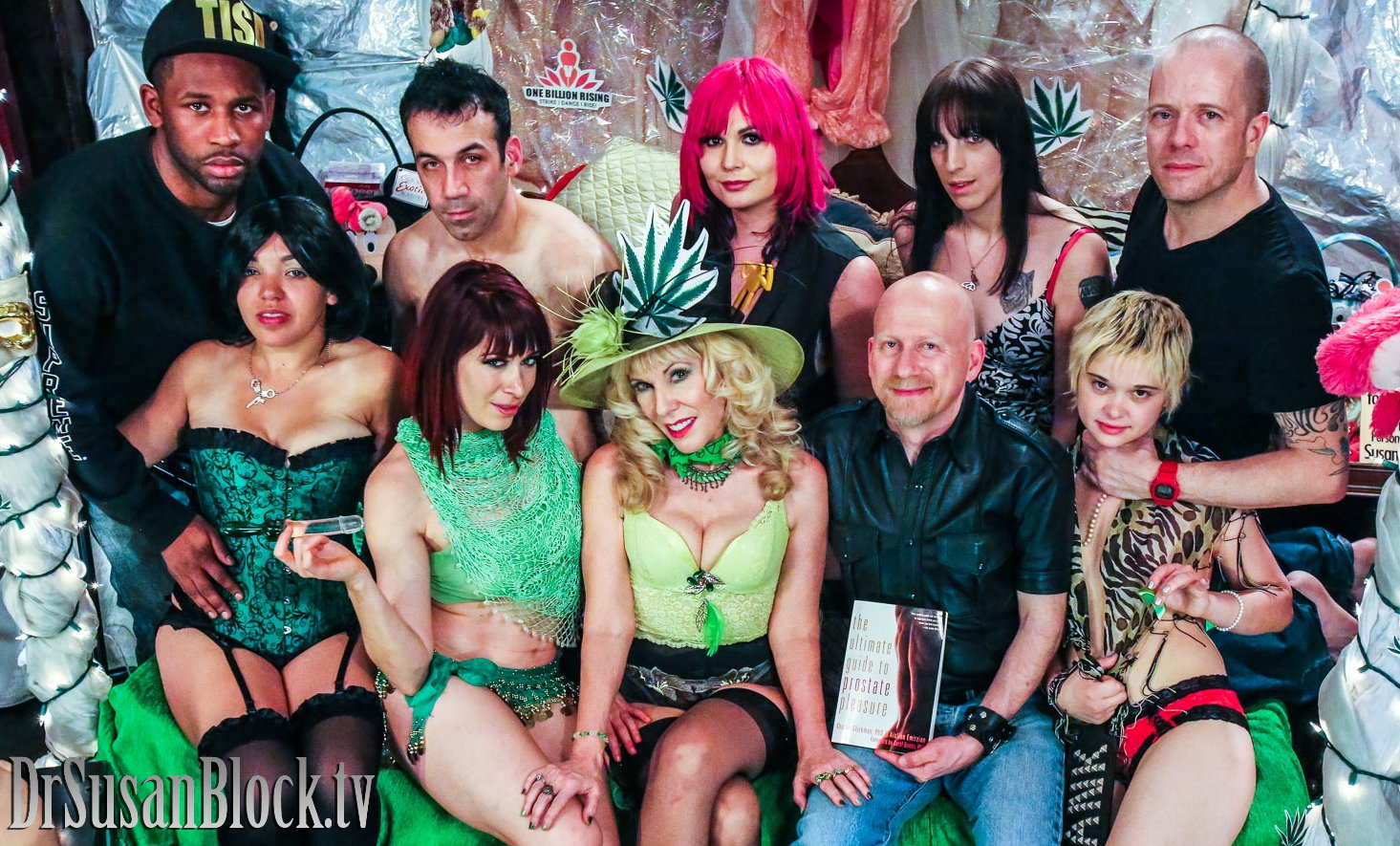