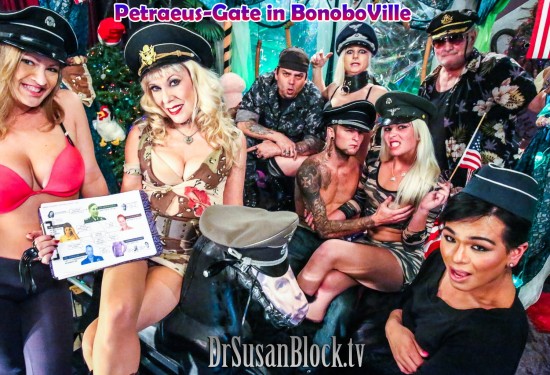 Check out the Free PGish Pix Page… X Pix and Video at DrSuzy.tv

What has become of “privacy” when even the chief of the CIA can’t carry on a secret love affair without the whole world finding out?  Welcome to the eerie new era of the American Surveillance State (ASS), bastard child of the Military Industrial Complex (MIC) and the Patriot Act, making sure that, whether you’re a terrorist, a mom or a four star general, Big Brother is watching you (yes, you too!), quite possibly without his shirt on.

David Petraeus:  The former CIA director and four star general is played with laconic sensitivity by DrSuzy.tv recurring guest/porn star Brock Hard AND Master Liam’s wooden horse. Brock gives the spotlight to Petraeus the Centaur (for more about the meaning of the original ancient Greek “Petraeus” who was a mythological centaur, half-man/half-horse, read “Galloping Petraeus,” also posted in Counterpunch).  But in the after-party, Brock takes the lead, living up to his last name and getting it “All In” to his adoring biographer, climaxing with a week’s worth of DNA evidence all over her well-toned tummy.

Paula Broadwell: Petraeus’ svelte hagiographer and gung-ho lover is played with panache by porn star Shay Golden who comes to the part with not only a special love for her leading man (who happens to be her boyfriend) but, in a stroke of accidental type-casting, we discover that Shay is an avid rider, owner and lover of horses because “they are beautiful, amazing and you can train them to do whatever you want.”  But no, she’s never had sex with a horse.  Though when I tell her about the original Petraeus being a centaur, she exclaims, “I wish that was real—I would definitely have sex with it!”  She does ride the wooden horse/centaur while making out with Brock as Petraeus and Jill Kelley/Vicky Vixen, then rides the Sybian to multiple orgasms and spends most of the after-party having hot spy sex with the Spy Chief who winds up leaking classified information all over her beautiful belly.

Washington and The Media: The war-loving corporate press and his many adoring fans in Congress and two White Houses were giving General Petraeus what in media hack parlance are called “blow jobs” long before we found out that Paula Broadwell was giving him real ones.  So it’s only fitting that one of our favorite fellatrixes, sultry shemale Jaslyn Lee, who fellated Bottom the Ass in A Midsummer Night’s Wet Dream, fantasizes about “sucking Marine cock,” and opens extra wide for centaurs, horses and men who are hung like them, should nail this role with a virtuoso performance that even another cock-sucking champ (Vicky Vixen as Jill Kelley) is impressed.  Btw, even though we are not required to comply with LA’s new moronic Measure B, our horse cock is always covered with a changing supply of Condomania condoms.

Thanks Mia Pruitt for show blog assistance, and multiple thanks, kudos and orgasms to the Dr. Susan Block Institute Staff here in BonoboVille for making this show possible.

Check out the Free PGish Pix Page… X Pix and Video at DrSuzy.tv 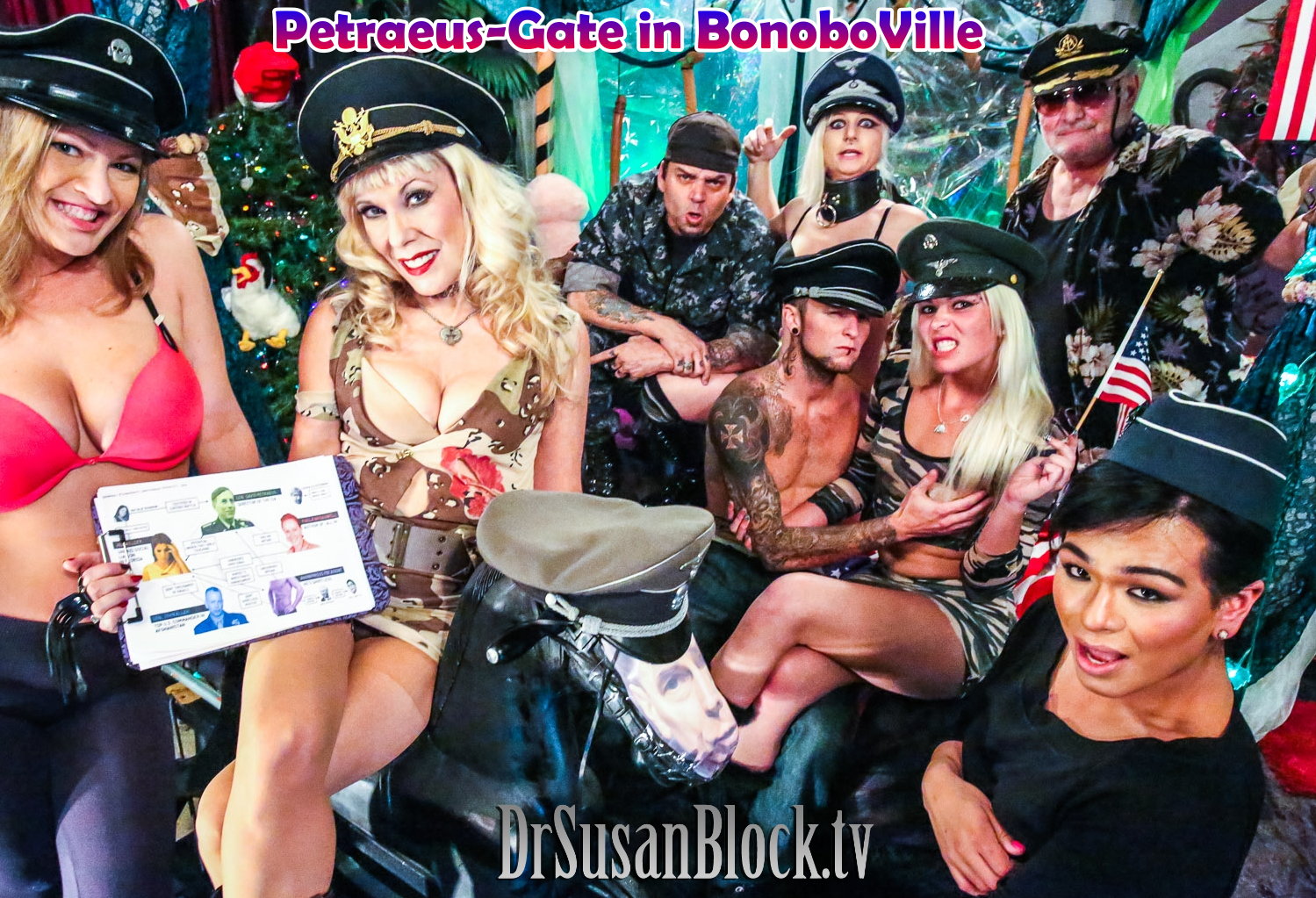