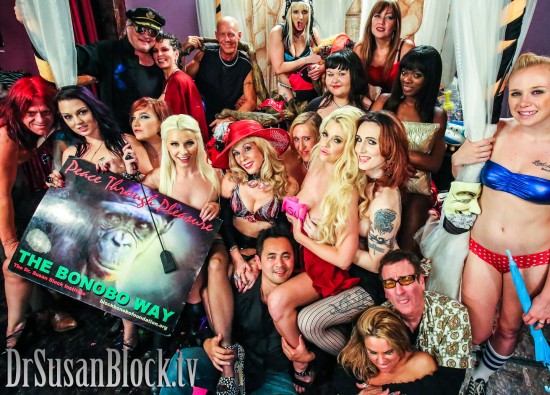 Yes indeed, brothers and sisters, we are all born from sex.  With all due respect to the Virgin Mother, real mothers are not virgins.  Neither are fathers.  Sex is what brings us into the world, and sex is what motivates us to stick around for a while. Praise be to the power and glory of sex!  It keeps you young. And you keep me young. At least you—my readers, listeners, lovers, viewers, friends, clients, tweeps, my awesome, ever-changing socialist/capitalist BonoboVille community—keep me from ever growing up.  The proof is in this party.   Thank you all for helping to make my crazy marvelous life possible.

Tracey Sweet: First appearing on the SSSS show and then again for KiNK SURViVORs, sweet Tracey is a Mouseketeer run amok, joining Tasia in an opening panty dance just before I pop out of the cake.  She also gives me a very SWEET gift which I won’t identify specifically (though, let’s just say it’s helping me write this blog now).

Stevie Shae:  Back again in the Speakeasy after she made hyphy sexy and rocked the Munkey-Barz on our Too Short show, Stevie starts things off right with an ass-shaking good time in nothing but panties for Panty Boy to die for.

Courtney Taylor:  Not only does she double-ride the Sybian with me for one of the grander climaxes of the show, Courtney rides my new KinkyEddie vibrating strap-on in the after-party, and her sweet-as-birthday-cake, wide-eyed, naked beauty inspires Stripperella artist Anthony Winn to sketch her cartoon portrait.

Amanda Blow: The amazing Ms. Blow lives up to her name once again, licking the balls of one of my huge penis-shaped birthday candles—not to mention an actual penis—as part of the birthday festivities. She also gives me unmentionable gifts and takes a birthday spanking from my spiffy new JuxLeather riding crop.

Murrugun the Mystic: Once again in the Womb Room, the man, the mystic himself, swallows a sword of steel for us while his girl simultaneously swallows his sword of flesh for him. As if that weren’t impressive enough of a feat, he then swallows a Model T axle which she sucks his crackshaft.

Cece Larue:  The lovely sword-sucker of the sword-swallower, gets carnivorous on her carnie lover, performs on the stripper pole and gives me assorted prezzies, including a vibrating Rubber Ducky.

Nova Brooks: One of the few newbies to the Speakeasy to grace this exclusive birthday bash, she makes an entrance like a super nova, stripping down around the stripper pole.  Hope she comes back so we can get to know her better on a show that isn’t quite so orgiastic.

Corpsy: Frequently seen at the Speakeasy, my dearly beloved friend Corpsy’s birthday “gift” to me is a cadaver (on loan, of corpse) dressed up in my hat, push-up bra and Yale University thong.  Talk about seeing a vision of your own demise!  The Girls and Corpses Deaditor-in-Chief is also one of the lucky lads to lay his lap in Courtney’s path.

Anthony Winn: The fella’ behind Stripperella, the super-stripper-heroine “who strips by night and fights crime even later at night,” provides another lap for Courtney to lay on, then tips her with one of his amazing comic sketches, immortalizing her cartoony beauty.  In the after-party, he Fred Astaires me around the dance floor, and miraculously, we don’t fall once.

Bon Jon Syn: Speaking of men who donate their laps, his winds up in Amanda Blow’s face.

Jonni Lynch: Once our own beloved Speakeasy resident, we haven’t seen her since her own birthday a few weeks ago. It seems like it was just yesterday when it was her swallowing swords!

Eric/Erika: Another of the evening’s few Speakeasy virgins, Eric/Erika (who prefers to be called Erika) says s/he is the purest form of hermaphrodite, referred to by doctors as an XXY Mosaic 46 hermaphrodite. What that exactly means to the naked eye, we’re not sure of, because Erika refuses to give us proof of her claim that she does indeed have two functional sets of genitalia. Though she isn’t too shy to reveal her sizeable melons or ride the Sybian.

Master D:  Grandson of Australia’s most famous nightlife kingpin, D confirms the importance of birthday spankings and demonstrates how to use my nifty new KinkLab violet wand from KinkyEddie.

Morgan Bailey: Our favorite TS Morgan, despite air travel delays, makes it to the Speakeasy on time to bring me roses and a big birthday shake of her amazing ass.

Mary Forrest:  Its great to have witty Mary back at the Speakeasy, this time with a couple of hot models, Arianna and Chris.

Kat & BD:  One of our favorite couples, they’ve been coming to the Speakeasy for almost a decade, but haven’t been here for a while, so its great to have them bless the bar and several beds with their orgasms.

DJ Leo9: Our favorite DJ rocks the house in the after-party.

Yossie Vardan: Sculptor of the bust of me that sits on the Speakeasy bar, Yossi, a designer of many things from luxury cars to the backdrop of my set, drives in all the way from Michigan to help Tasia make my cake which, he points out, is also a dress.

Weapons of Mass Discussion: Birthdays, Life Stages, Being Born a Cesarean Leads to Trying to Get into Pussy, Mosaic Hermaphrodite, Reasons to Party, Bonobo Birthday, Gratitude 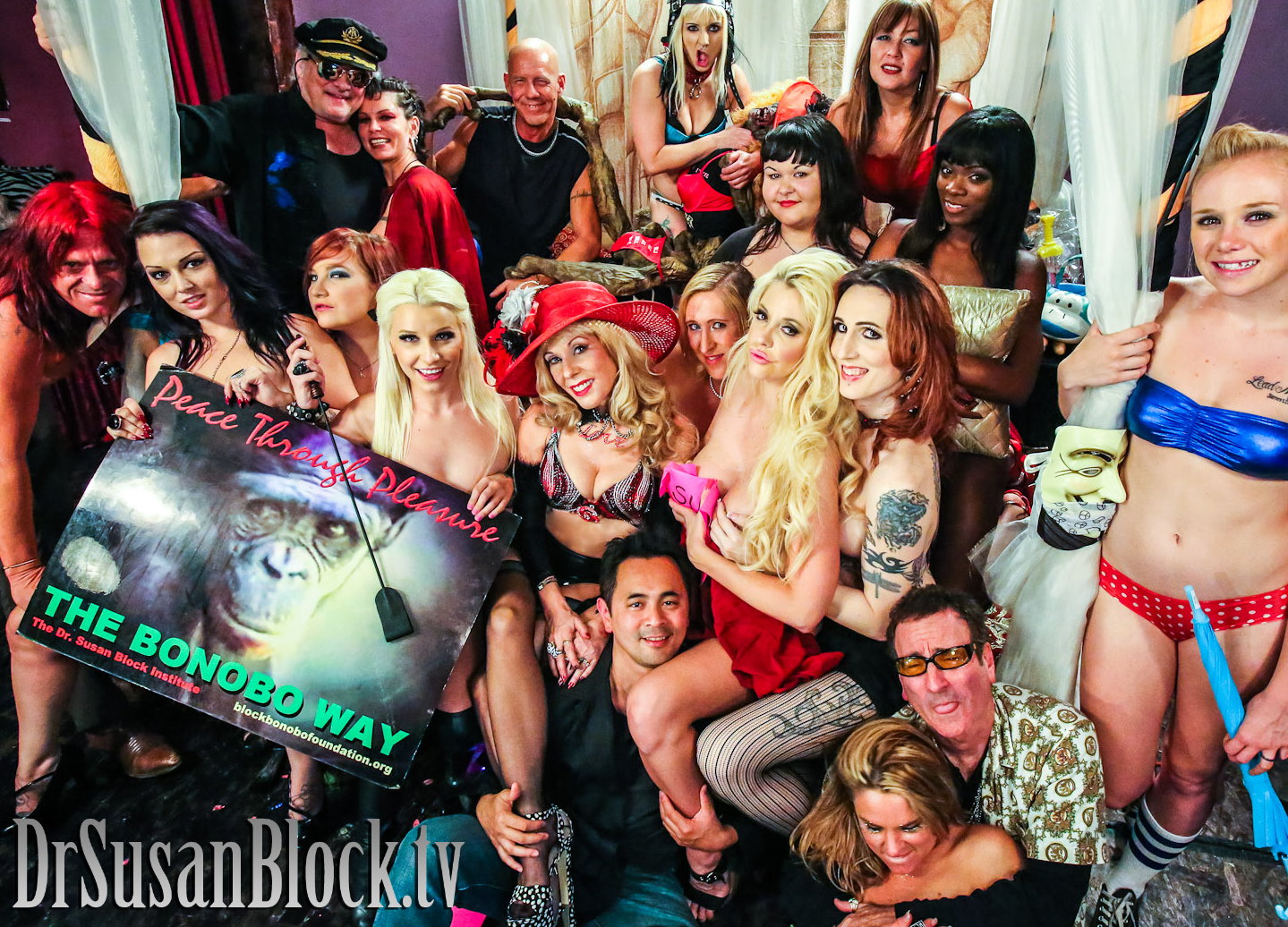