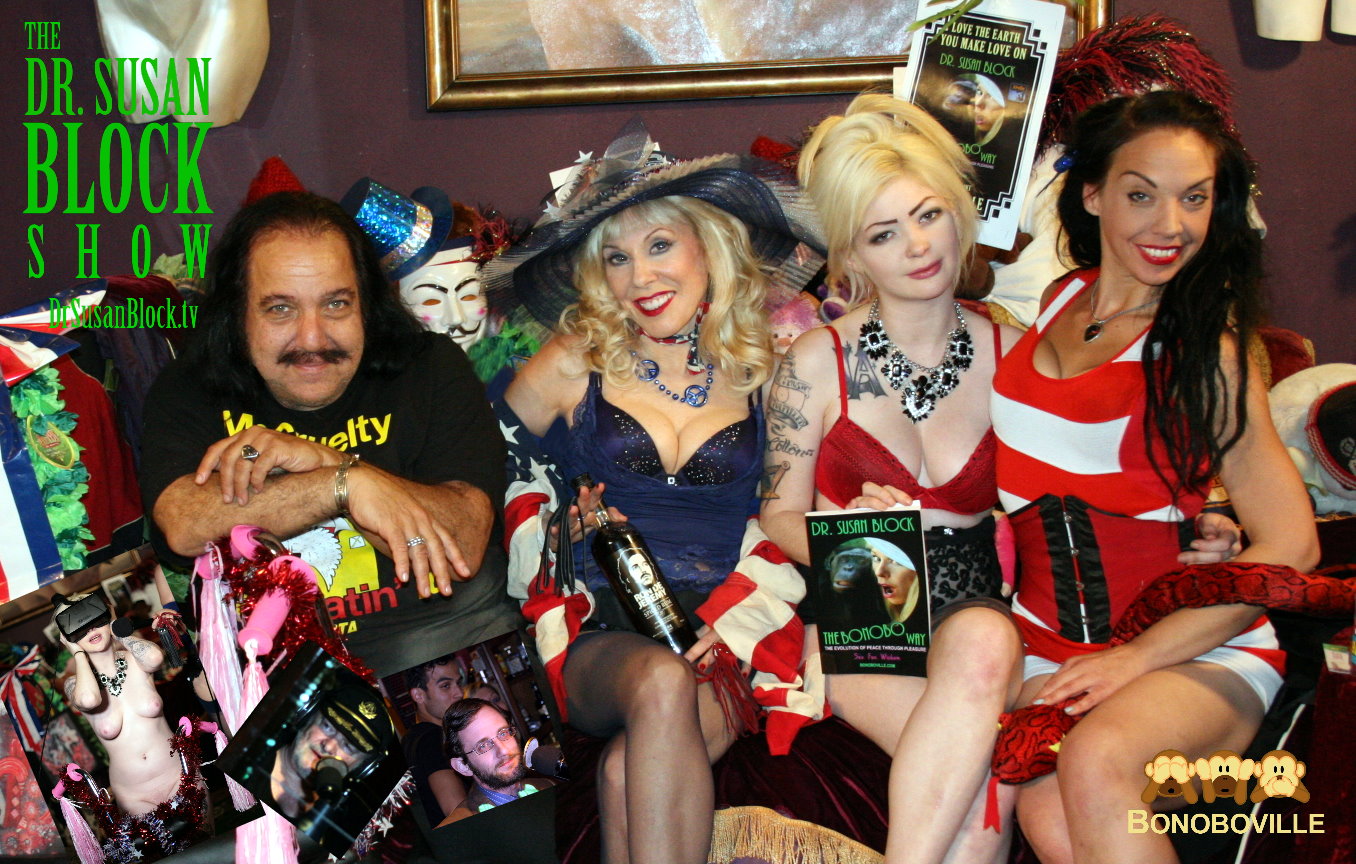 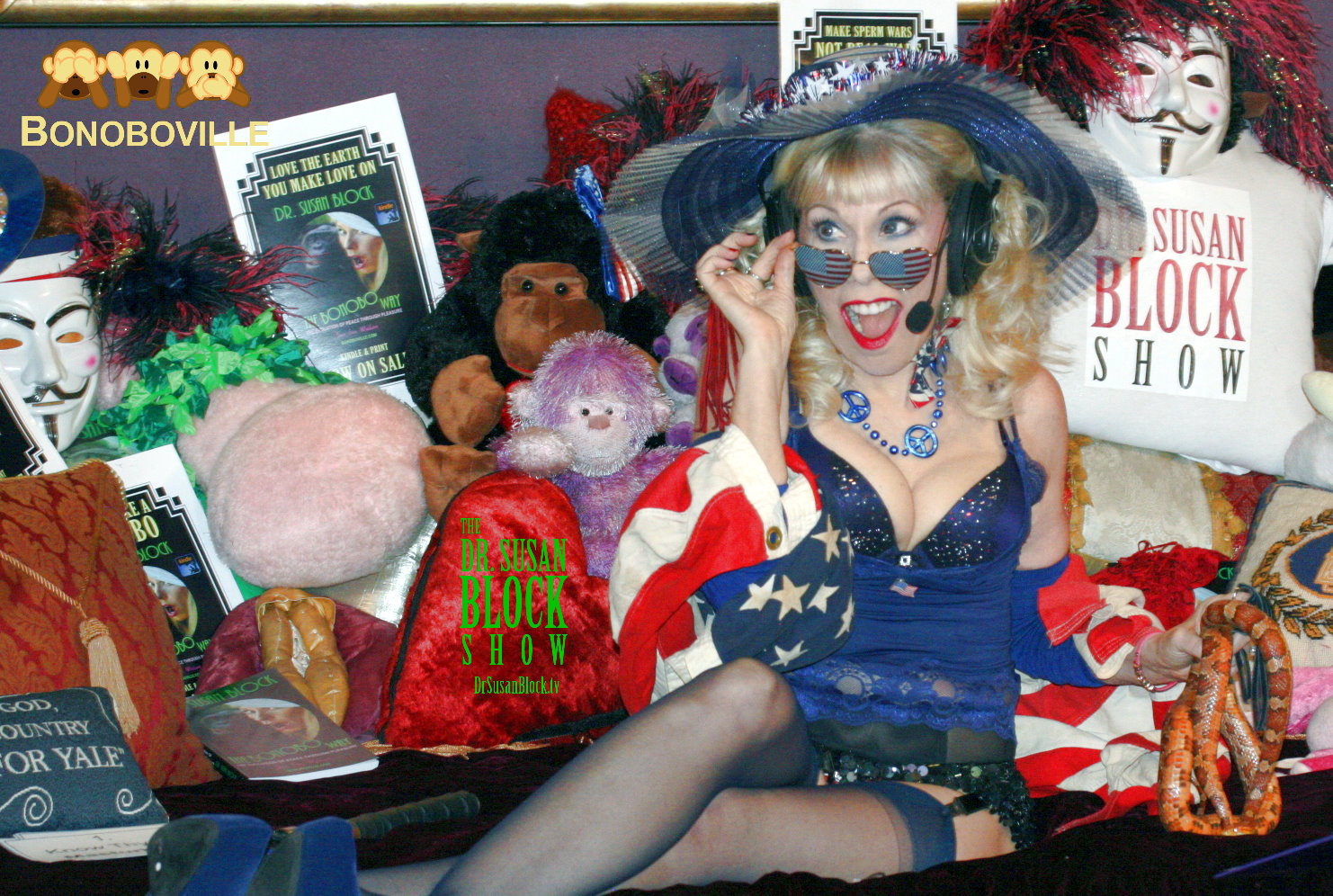 And I pretty much wank my way through the entire first hour of this almost-three-hour show, since my featured guests are exceedingly late. So I pass the time, lounging in my lingerie on my broadcast bed, playing with Snake Eve and raging against Memorial Day’s glorification of war (“Masturbation Not Occupation!”) with Capt’n Max. Then I introduce my sexy new DrSuzy.Tv producer/assistant, Elizabeth (also a new therapist with the Institute) all decked out like a flag for the holiday. We give her a warm welcome, she handles a snake for the first time (Eve is great with newbies) and we chat about various things, including Carrie Weisman’s new Alternet article on female ejaculation (which happens to quote yours truly profusely). Elizabeth confesses to being a squirter and, removing her red mask, she proclaims, for the first time in public, that she is bisexual. Testify, Sister Elizabeth! When she amends that to “pansexual,” everybody in the Womb Room nods excitedly, since that essentially means they are all contenders. 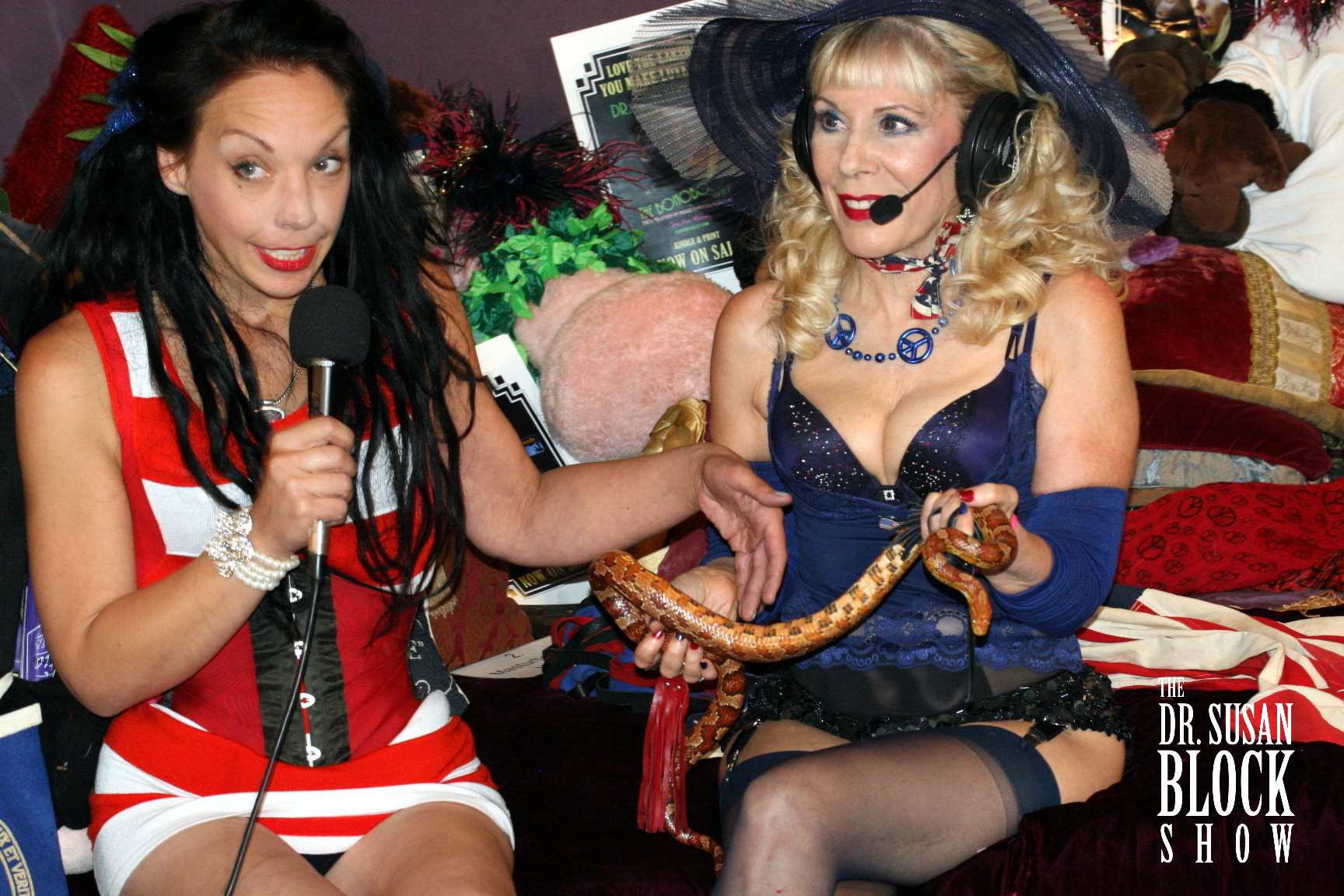 Whereupon Luzer Twersky strolls into the bar, nattily attired in a brown tweed Duncan Quinn bespoke suit. Our Weapons of Mass Discussion include: Memorial Day (of course); religious abuse; the exciting sex life of a “Best Actor”-award-winning former Hasid; the new Wiley-Blackwell Sex Encyclopedia, now infiltrating libraries, universities and the nubile mind of students, and for which I wrote entries on Cuckolding, Spanking, Striptease, Phone Sex and Fetish; Luzer’s personal fetishes for African-American women and bacon; Three Cheers for the Irish legalizing same-sex marriage (thanks for the tip, Chris Gagliardi!); Dr. SerenaGaia’s forthcoming Ecosexuality collection; my Frank Moore for President pin; FemDom Great Apes at DomCon with DDI; and Israel’s best export: Penthouse Pet of the Year Layla Sin (next week’s guest!)—until his date arrives, at which point he sinks back into the studio audience. Meanwhile my featured guests of the night are nowhere in sight.

Their phone calls and texts, however, keep us apprised… of what, we’re not sure. At various points, they are “five minutes away,” “in an Uber,” “in the building,” “on the wrong street,” “lost” and “on their way.” Finally, they are “here.” At least, one of them is. 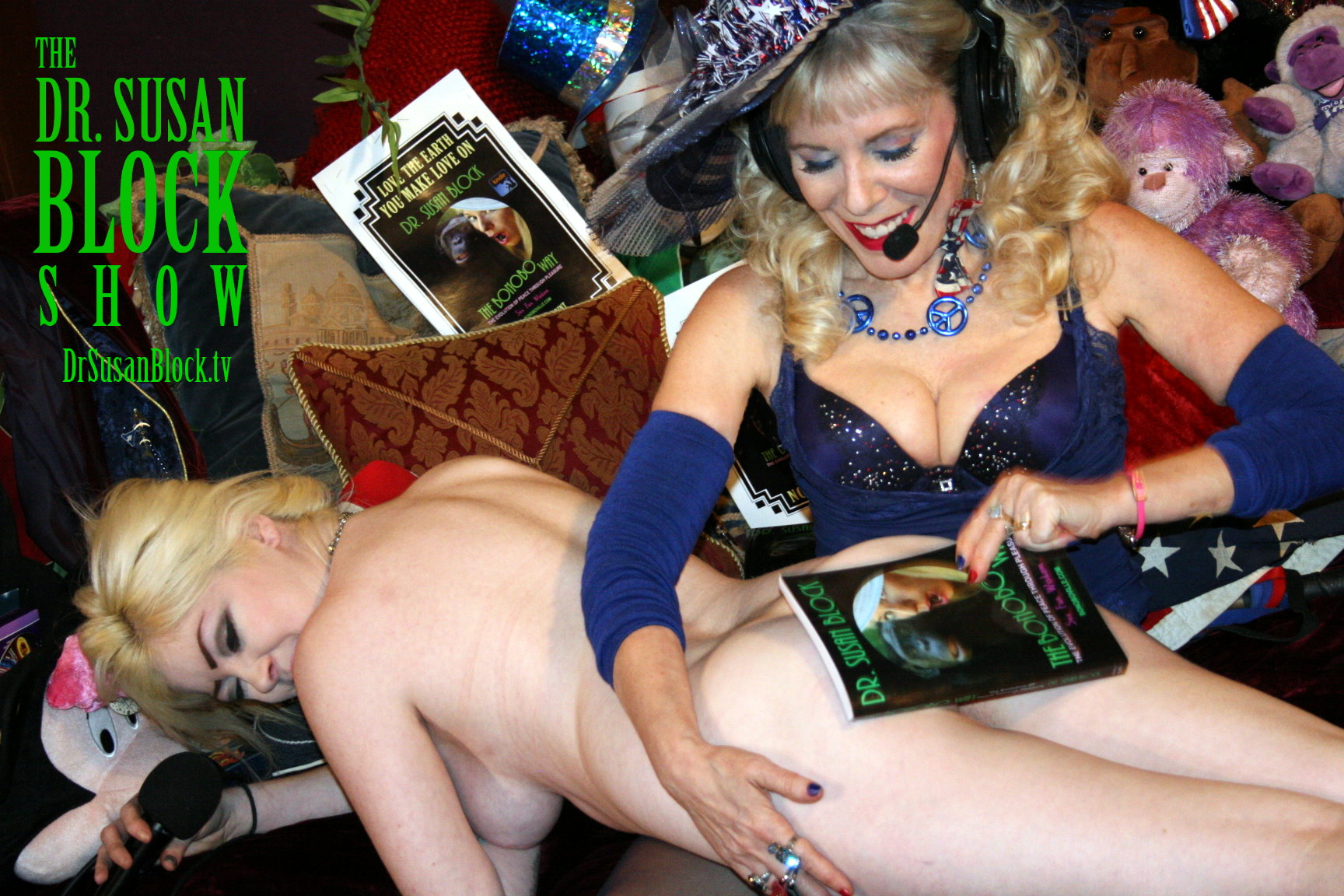 Strike up the band: Amor Hilton is back in Bonoboville, brothers and sisters! Baby Block has returned to her Mama from her East Coast wanderings (New York, New Jersey, Miami), and let’s just say: she’s worth the wait. Doll-faced, tousled-blonde, adorable, amor-able Amor makes me forget how I was just fuming—live-on-the-air—over her incorrigible tardiness. Cute or moot, she must be spanked (another sound book-spanking with The Bonobo Way!), and the ballet pink sweat suit has got to go. Off comes the top to #FreeTheNipple for “Bonoboville Communion” with Agwa, and yes, Amor’s boobs have grown (must be all those Jersey cows) and are even more succulently delicious, with salt. And yes, they’re still, thankfully, all-natural; Amor having politely refused Max Hardcore’s offer of a boob job and a Honda Civic for a starring role in one of his notorious flicks. Finally, down go the sweatpants, and a hush comes over the Bonoboville congregation as our eyes are baptized in the glorious nakedness of our Goddess of Love. What a vision! 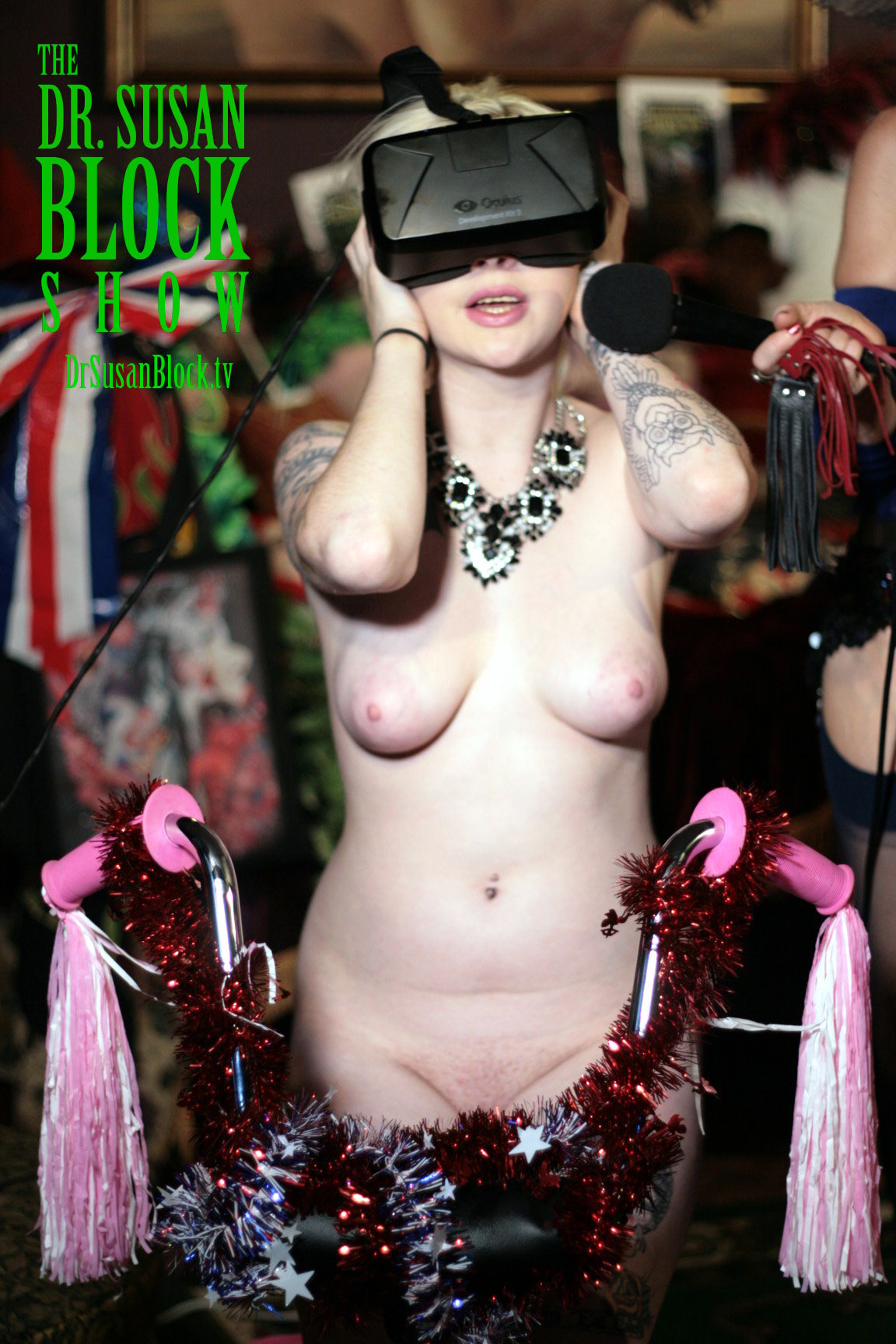 With Amor in an orgasmic afterglow from her Mad-X-Bike ride, and just a minute to go, we’re about to close up when guess who arrives? The other MIA featured guest, our iconic ironic friend, Ron Jeremy, old-school porn star, mainstream sex icon, the King of punny schtick with a big dick (although he’s “Not Just a Penis—a Pianist!”). Our late but beloved Mayor of Bonoboville takes the stage, bearing another bottle of delicious spicy Ron de Jeremy rum in exchange for clemency. It’s tough to say which is bigger, Ron’s funny bone or his boner, but he regales us with joke-after-joke on all points of the politically incorrect spectrum. He also gives longtime buddy Dennis Hof’s new book, The Art of the Pimp: A Love Story, a plug. Speaking of Memorial Day, the Bunnyranch offers freebies and discounts to soldiers on leave; that’s how patriotic they are. Then, from talking about the newly released Wiley-Blackwell Encyclopedia of Human Sexuality, we go to Ron Jeremy’s dictionary of vile sex acts he learned from undergrads on the college circuit, from a “Dirty Sanchez” to a “Cherry Cheesecake,” which we won’t explain, though you can look it up in the urban dictionary, but whatever you do, don’t do it! 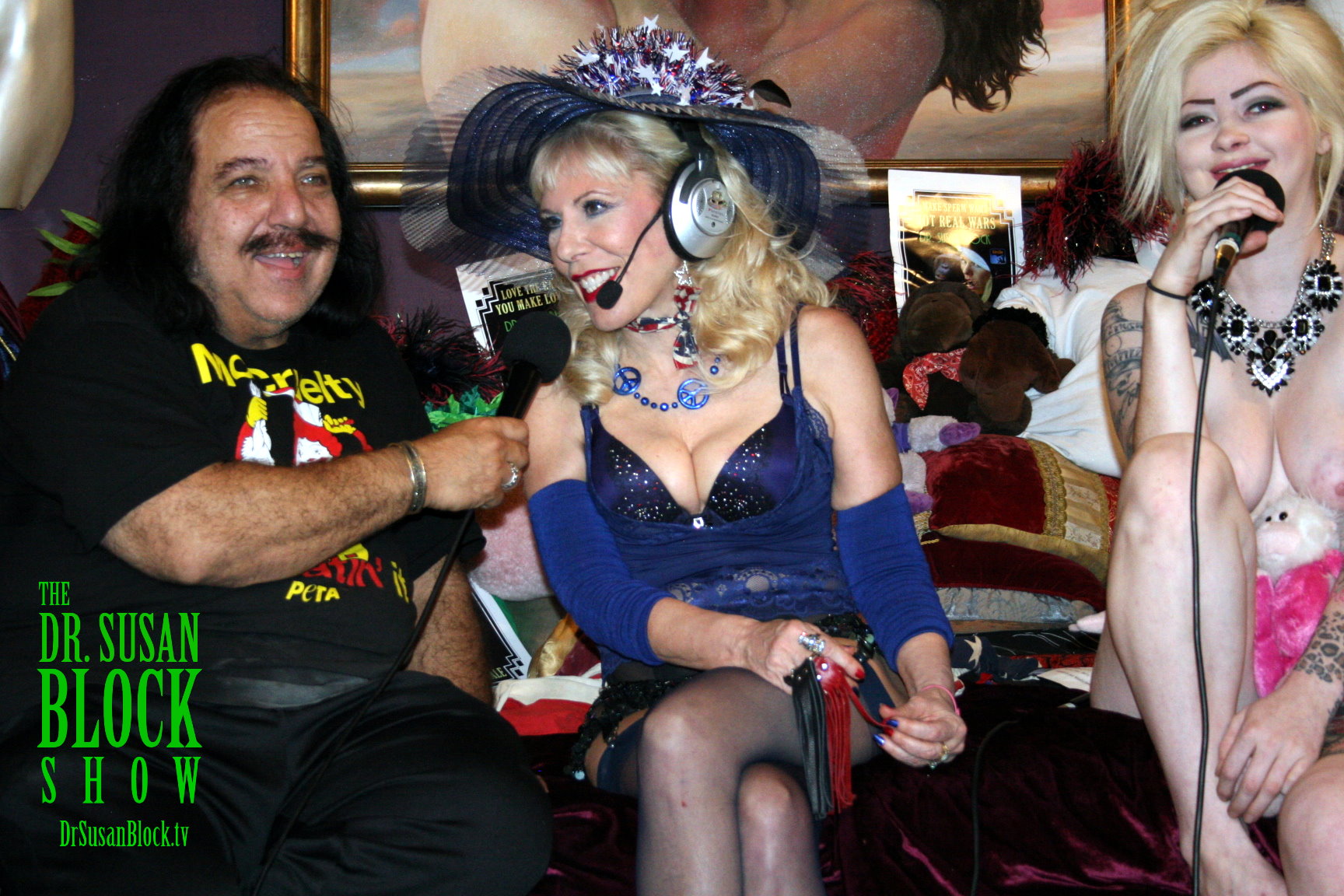 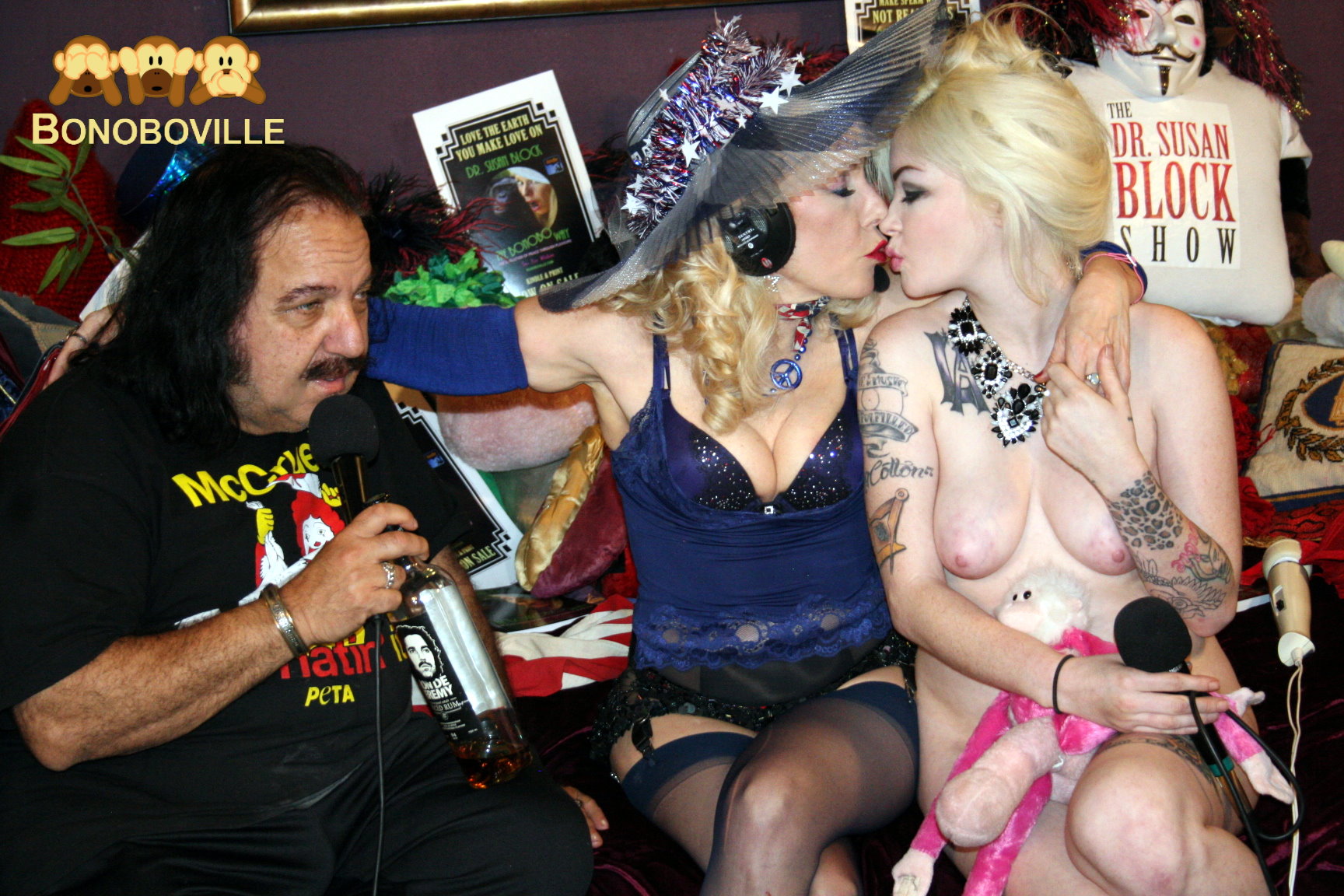 “Ronnie, don’t drink all the rum while we’re kissing!”

And welcome back to Bonoboville, Amor “Baby Block” Hilton! 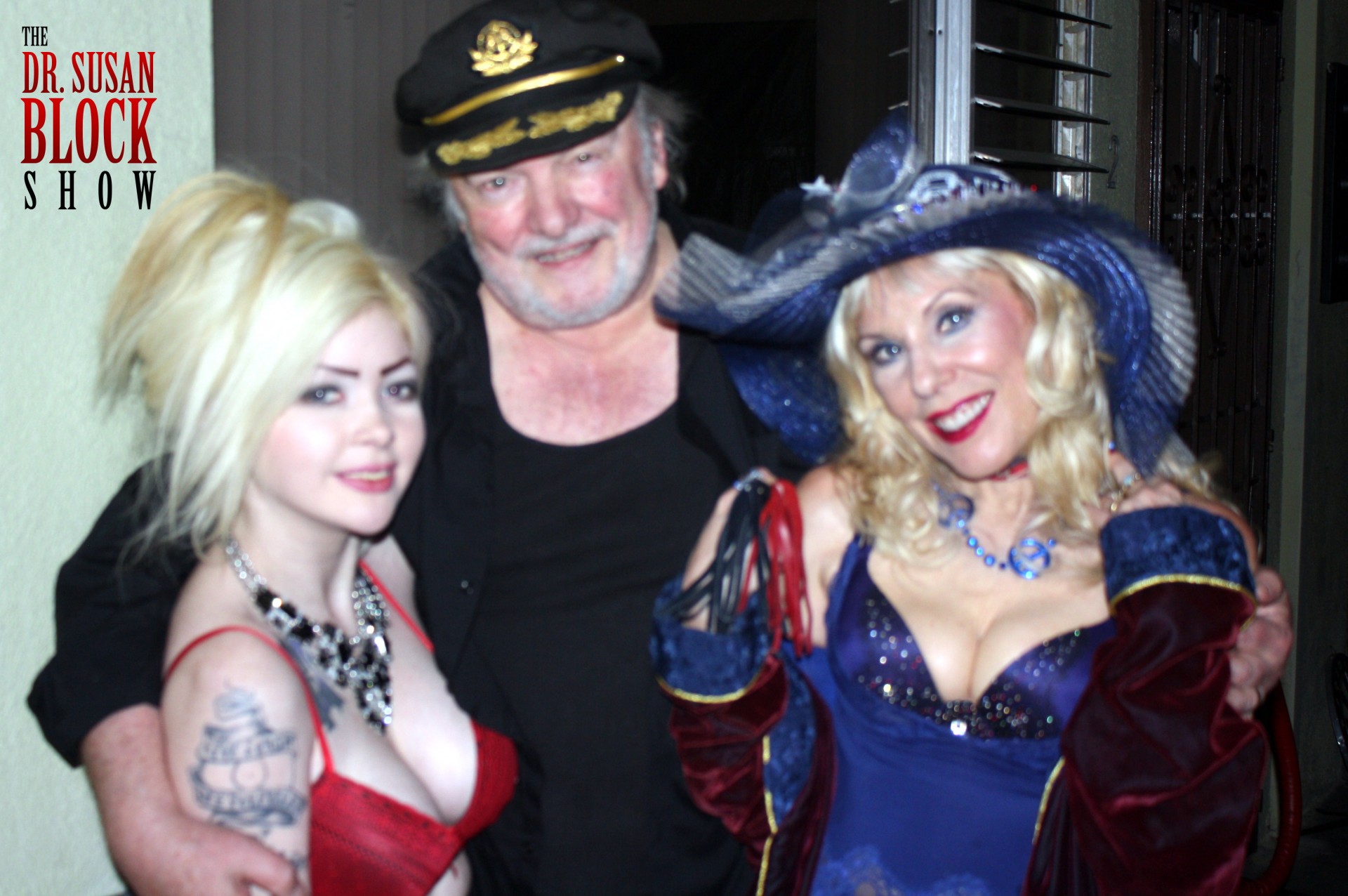