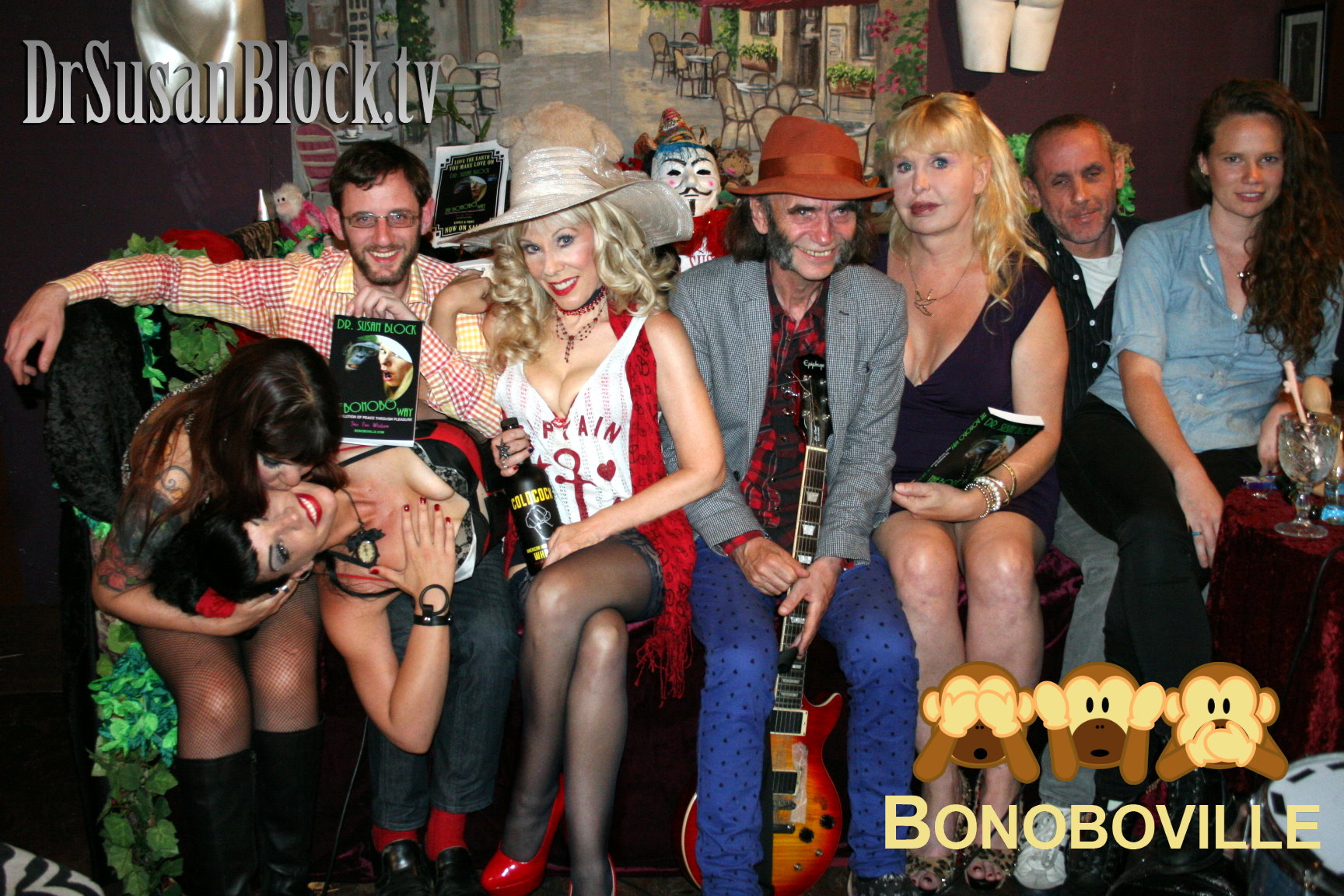 As the clothes come off in Bonoboville, the Confederate flag comes down in South Carolina, and the sweet sounds of the winsome Luzers greet the Bonobo Summer of Love. Toe-tapping Norwegian pop rock with a Hasidic twang, big fake boobs and pierced labia, Cold Cock and Cosby-itis… this show is eclectic with a capital Eeeee! It’s the kind of live broadcast that brings people together from all walks of life, setting The Dr. Susan Block Show apart from all the other shows and making it kind of uncategorizable. On the other hand, it’s just a 21st century spin on old-time Commedia: live music, burlesque and a bit of behind-the-scenes sturm und drang with a bonoboësque twang. 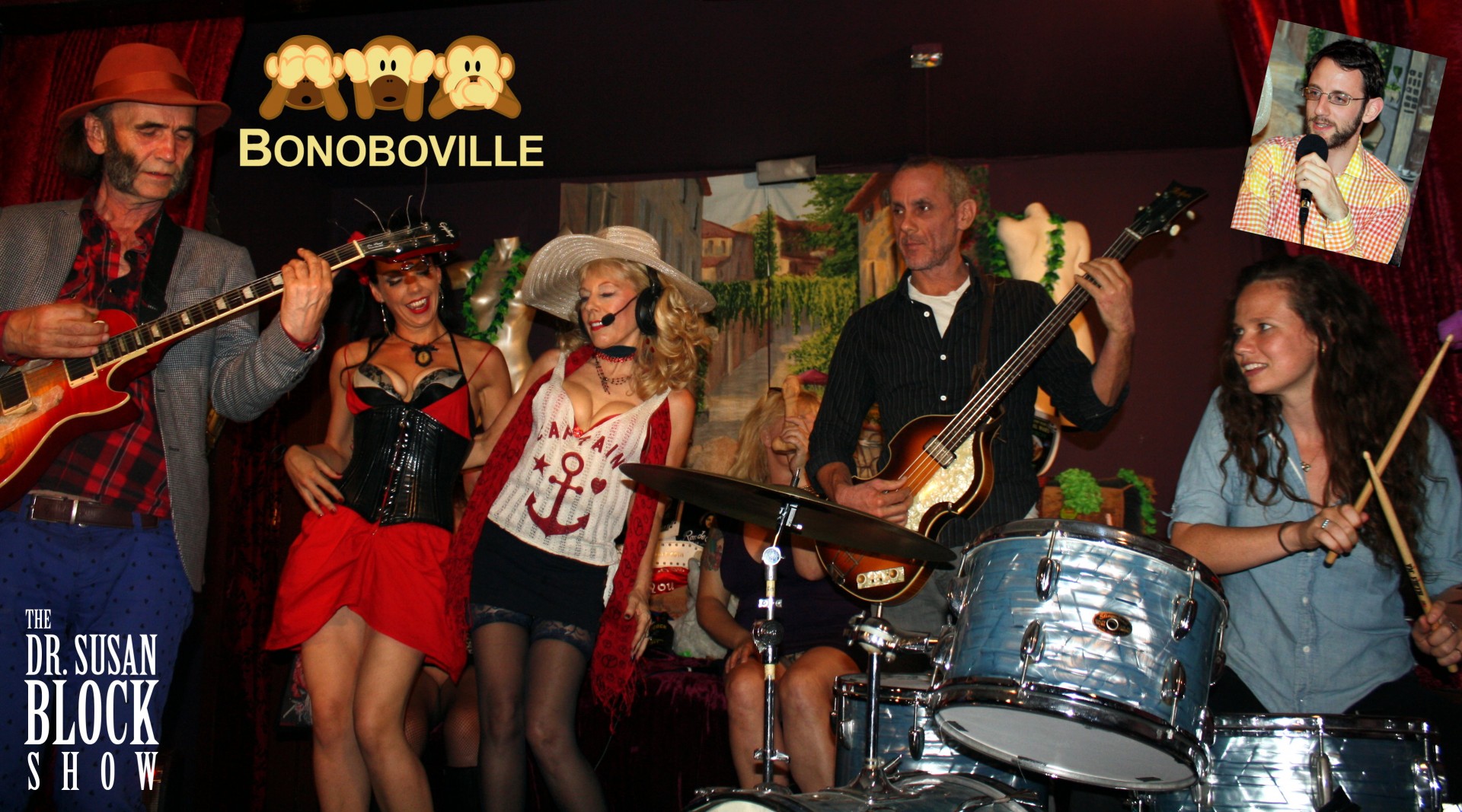 Our very special musical guests are The Luzers in their virgin appearance in Bonoboville and, indeed, all of America. Named for the band’s lead singer who also happens to be a recurring guest on DrSuzy.Tv, Mr. Luzer Twersky, the Luzers are the brainchild of the merry, mutton-chopped, musical Mad Hatter of Bergen, Norway, Hans Petter Gundersen, a.k.a. “H.P.” In addition to being LA’s most up-and-coming ex-Hasidic Jew, winner of two “Best Actor” awards for his performance in Félix & Meira and a recurring player on Amazon’s hit series Transparent, Luzer is also the unofficial Bonoboville chauffeur which is why parts of this show feel like a performance at a big family dinner, if your family gathers around for Cold Cock and a striptease. Listen to the archive to hear the romantic story of Luzer and Hans’ meeting at the Laurel Canyon Country Store. 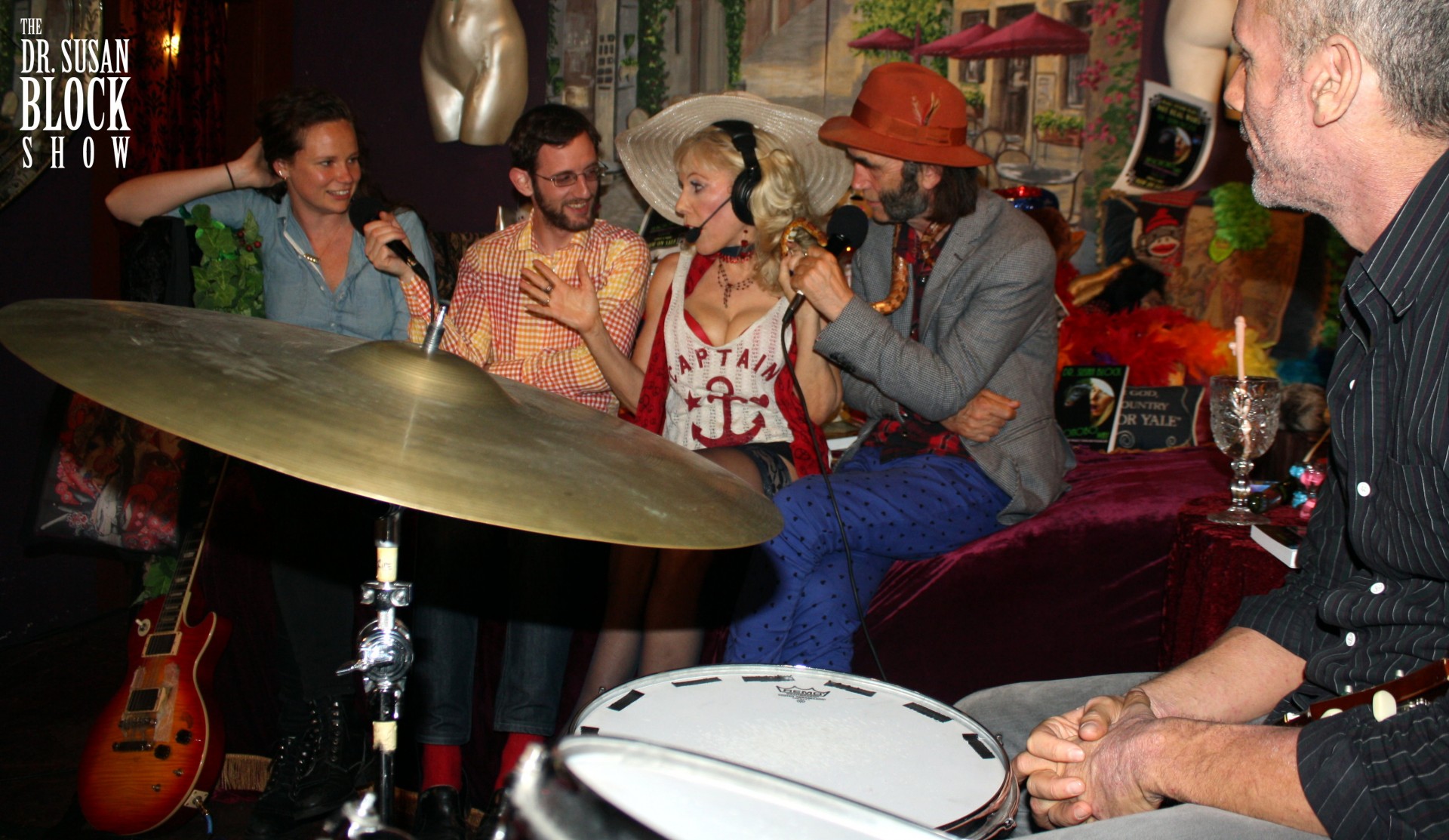 With the winsome Luzers and snake Eve on DrSuzy.Tv. Photo: Hollywood Jake

Banging the drums is the lovely and multi-talented Maesa Pullman (star of The Last Hurrah’s “Weight of the Moon”) who aptly describes The Luzers’ music as “super tasty pop nuggets.” Bringing it back home to Bonoboville, on bass is Jason Hiller who confesses to having watched The Dr. Susan Block Show when “there was nothing on TV like it” back in our HBO and public access era. Capt’n Max declares Jason to be one of “our millions of children” (thank Goddess, they’ve all been pain-free births). 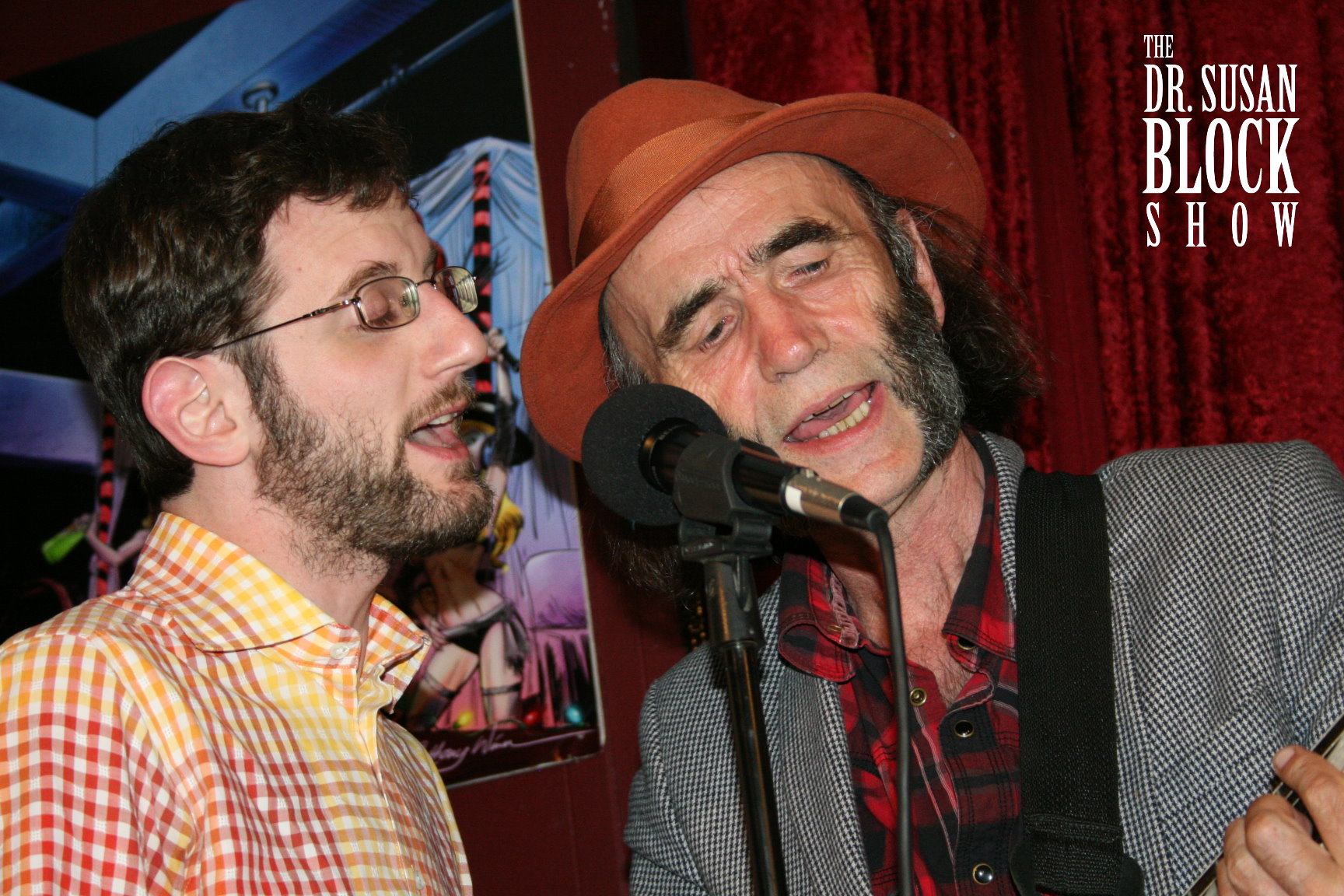 Though the bright, soulful music of the winning Luzers drives this show, we do bare some boobs and some impressive pierced labia, both sets belonging to the sultry and rather sleepy Helles Belle. Belle’s mysteriously drowsy demeanor is especially curious as we, like every other media outlet in the universe, are chatting about Bill Cosby’s Sleep Fetish. In fact, darling Belle seems soooo somnolent that I feel moved to announce that we are NOT serving Cosby Cocktails at the Bonoboville bar. But what we are serving is an amazing view of Helles’ Belles jingling around her trimmed vulva. and a provocative topless and bottomless dance all over Hans Petter’s peter, as well as his other instrument. In fact, for a minute, it looks like Belle’s nipples are strumming HP’s guitar. Then we realize she’s about to fall on it, and show producer Biz Bonobo nimbly catches her as they dance. 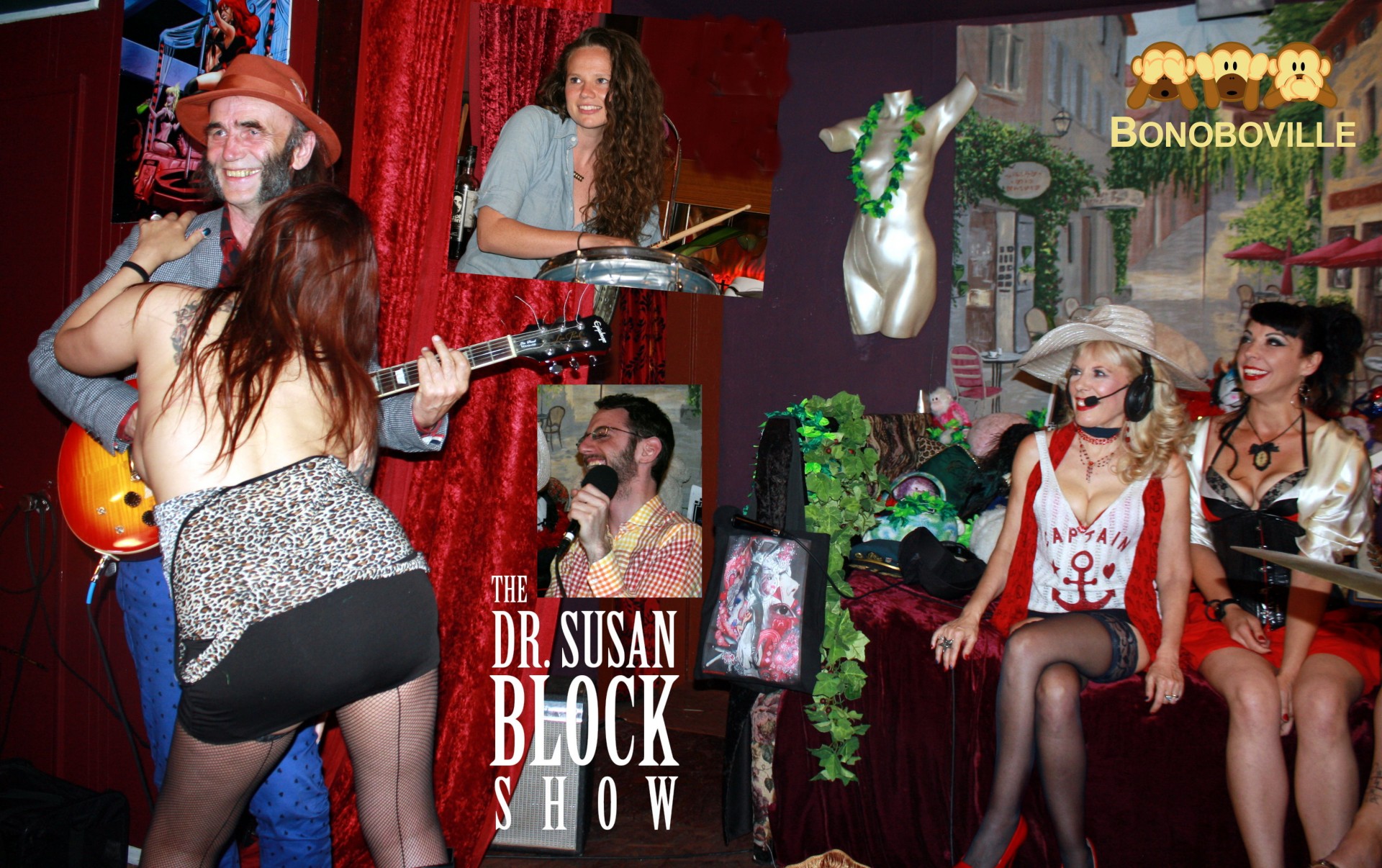 Next up is the comedic portion of the entertainment (although everyone on this show is kind of funny in some way, some unintentionally): stand-up comic Tuesday Thomas who, between Cosby quips and showing her boobs, really stretches the eclecticism of this show by explaining exactly how and why she will be getting her implants removed next week; one is leaking and both cause her pain. Wow, what an ordeal. Good luck Tuesday! Keep your sense of humor, doll. We’re with you, boobs or boobless; the important thing is your health. 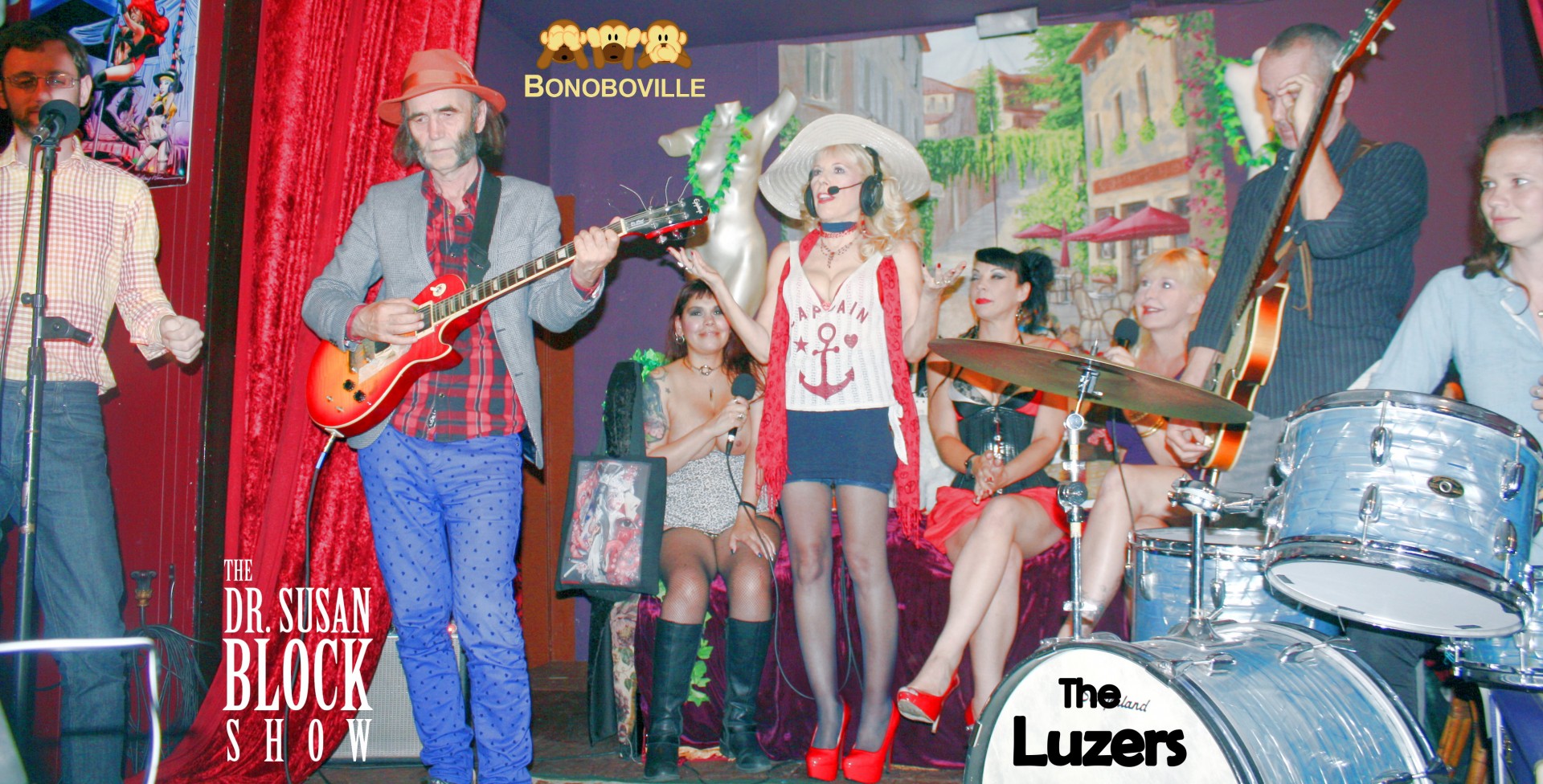 “Leaky” and “Sleepy,” Tuesday and Belle join in on Bonoboville Communion with several delicious, stiff shots of Cold Cock. Our new favorite drink packs a wallop, mainly because it tastes so good, you forget it’s hard liquor, but no, there’s no connection whatsoever to Cosby Cocktails. Boobs out for Communion! 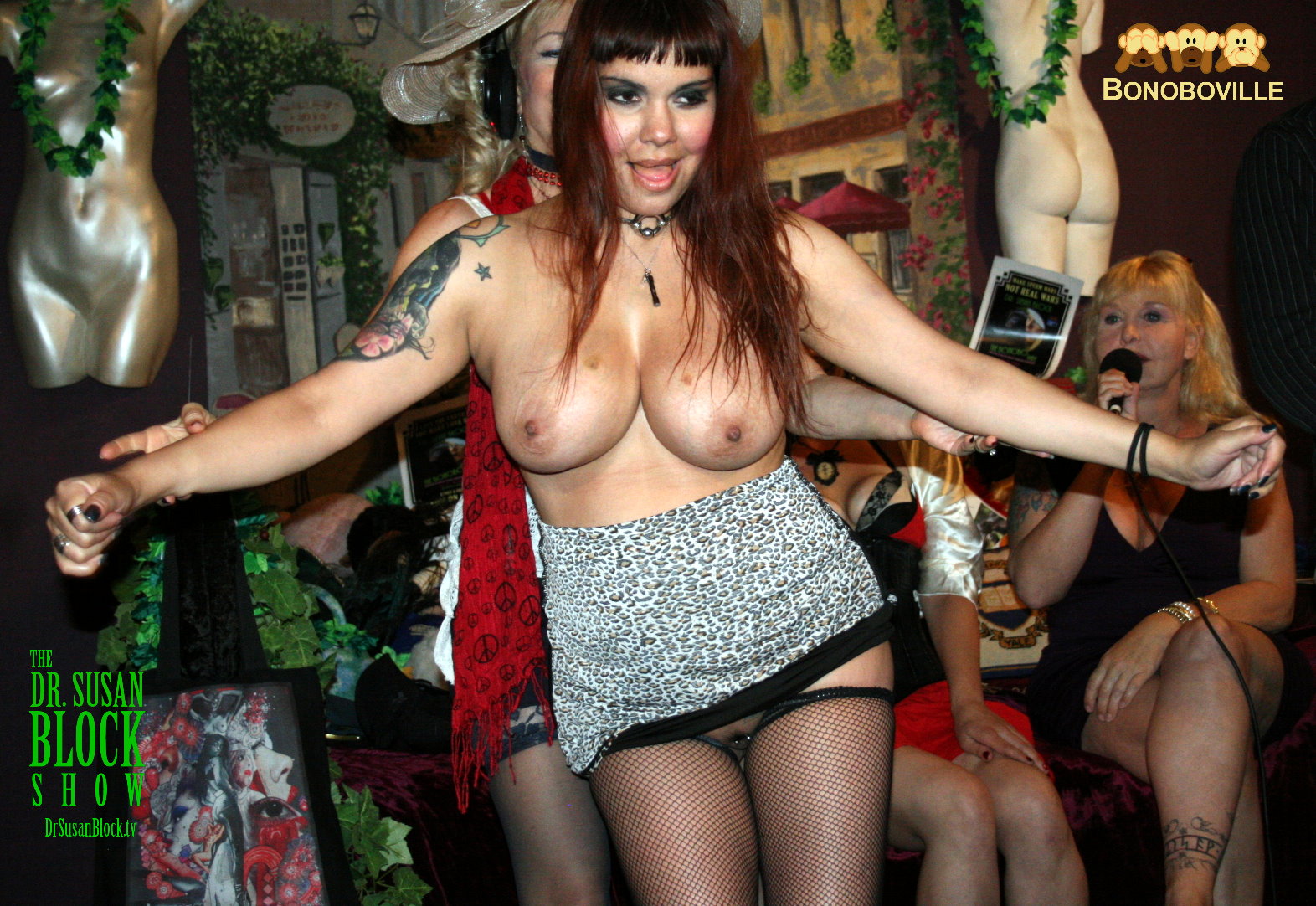 We support Pope Francis in his brave and vital crusades against poverty and ecological destruction. Nevertheless, we’ll take Bonoboville Communion over Catholic Communion any day. It’s the Bonobo Way. 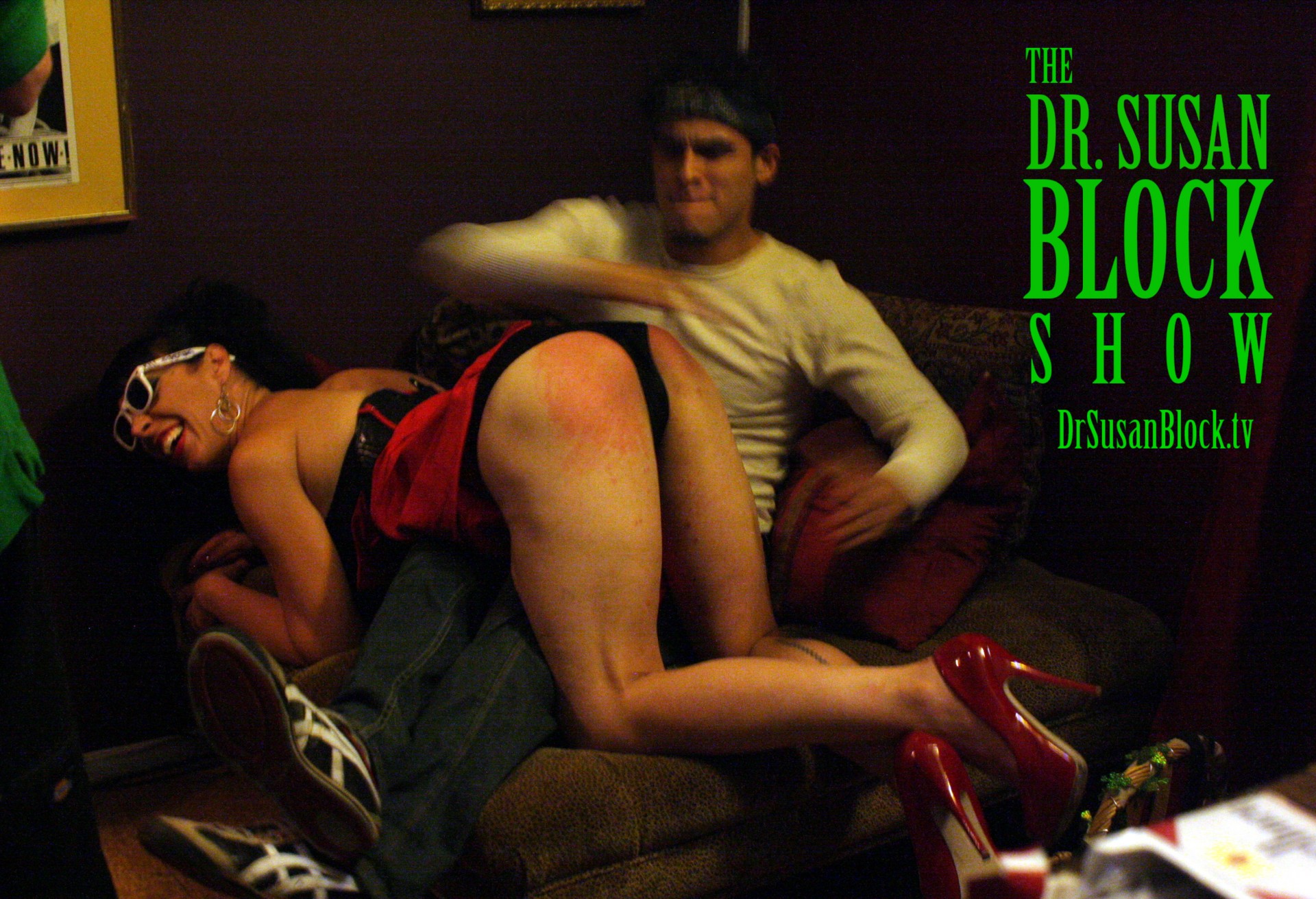 Happy Bonobo Birthday Hollywood Jake! And thanks for the tweets, Del Rey and Chelsea, both therapists with the Institute. Speaking of which, if you think you might have Sleeping Beauty syndrome, don’t be a Cosby—give us a call… 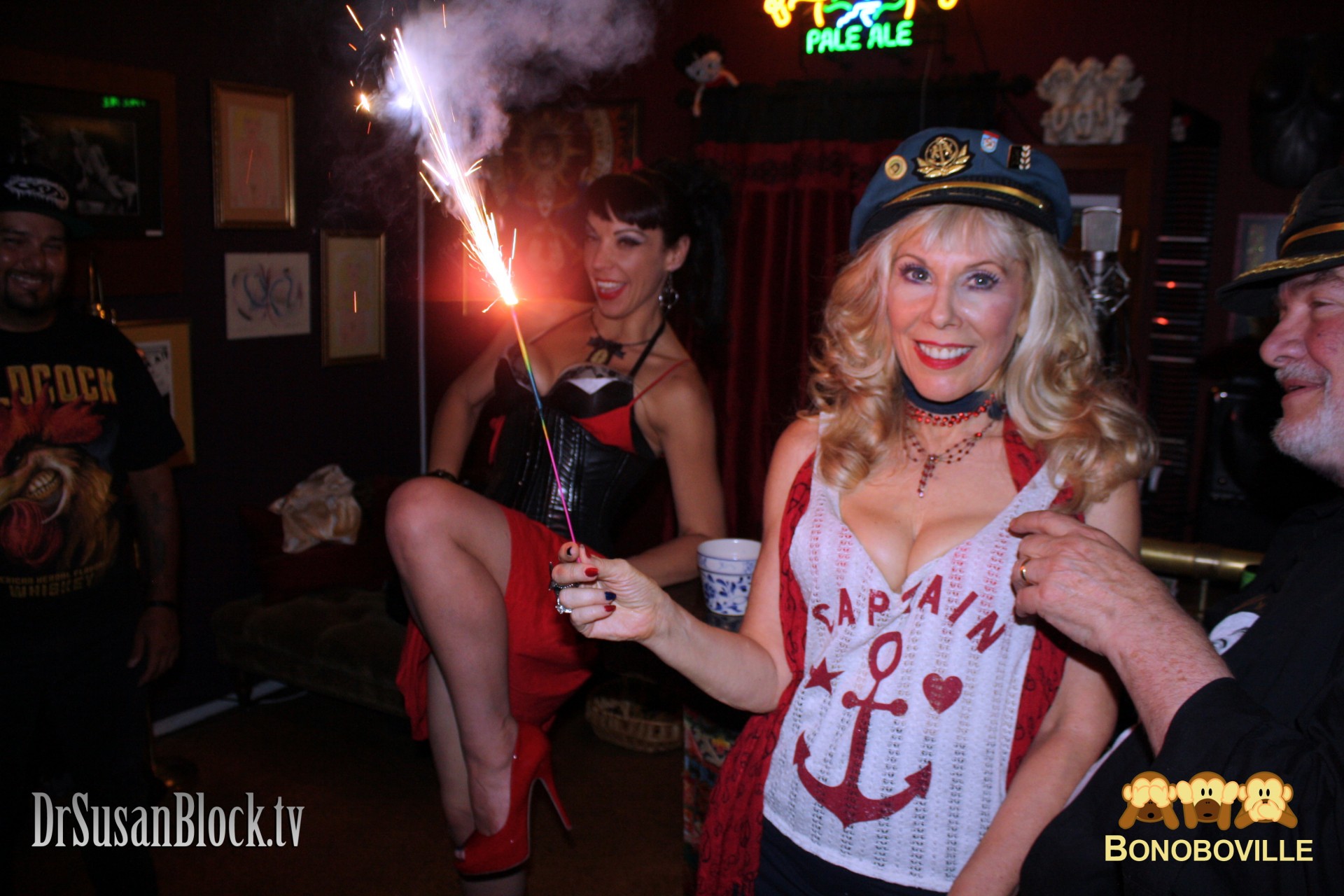 « ORGASMS for the EYE on The 4th of JULY! » Ethical Sluts and Elvis