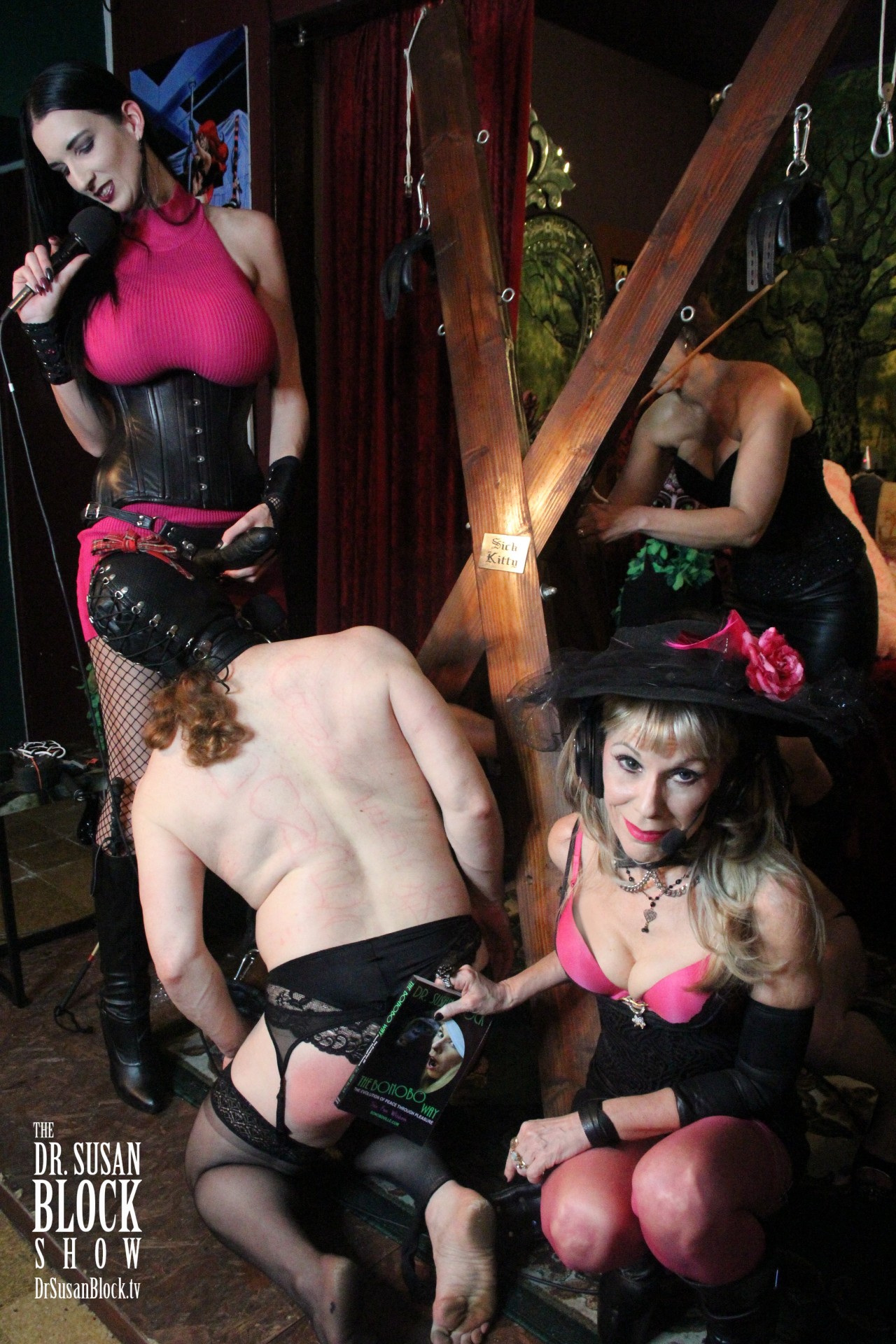 Standing 6’3″ in her stocking feet (a size 12) with 32H cup size, a 27″ waist and long silky brown hair that skims her bubble butt, the polyamorous, bisexual and majestic Goddess Fae Black towers over most of Bonoboville, like Gulliver among the Lilliputians. But She’s also very sweet, playful and down-to-earth, and we kick off the broadcast with a nice chat about Her childhood as a preternaturally tall (taller than her parents and four brothers!), Pentecostal Church-going Airforce brat, as well as Her well-equipped, premiere San Diego playspace, House of Black, where she hosts Lifestyle Kink Swinger, as well as rents to other San Diego kinksters. 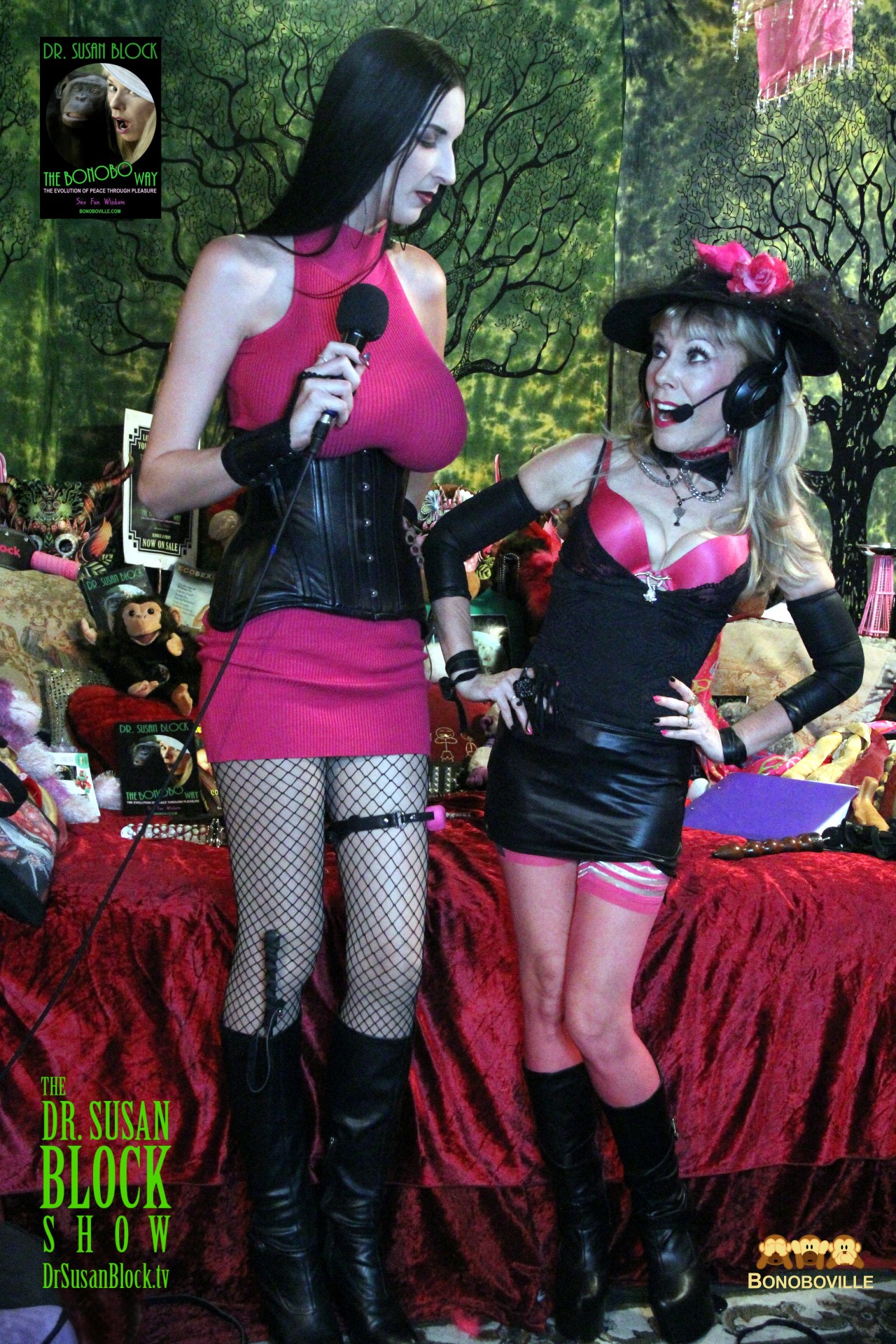 “Do you agree with Freud that women have penis envy?” I ask Her, staring at Her stroke the mammoth phallus and rub it against Her Slaveboi Julia’s exposed butt cheeks, as well push it into Her sissy maid Justina’s compliant mouth.

“Why would I envy men their penises, when I have this one?” 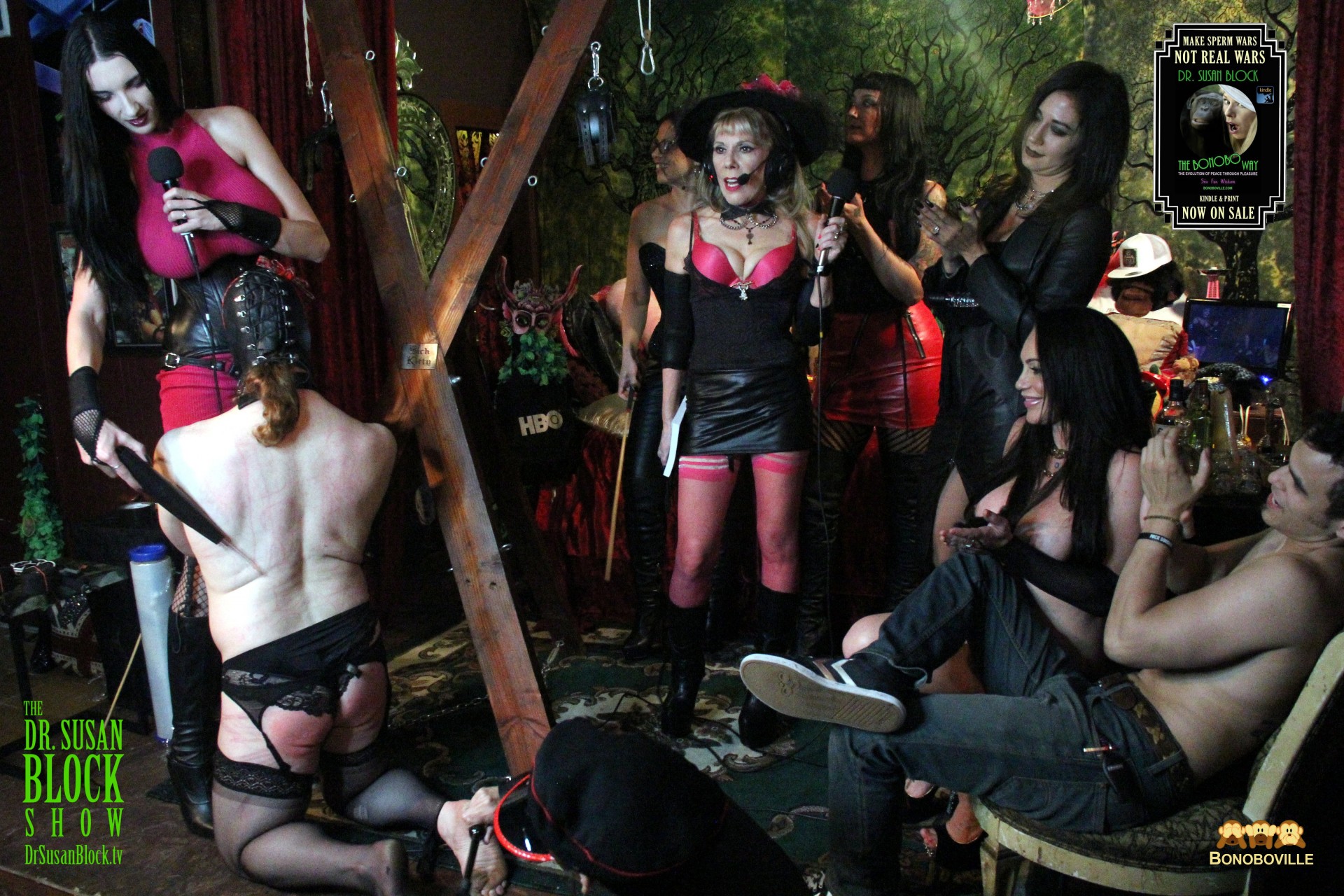 Interesting that the girl who used to go to Pentecostal church services where people “spoke in tongues” is now using the tongues of Her slaves to caress and suckle Her humongous dong for Her pleasure. 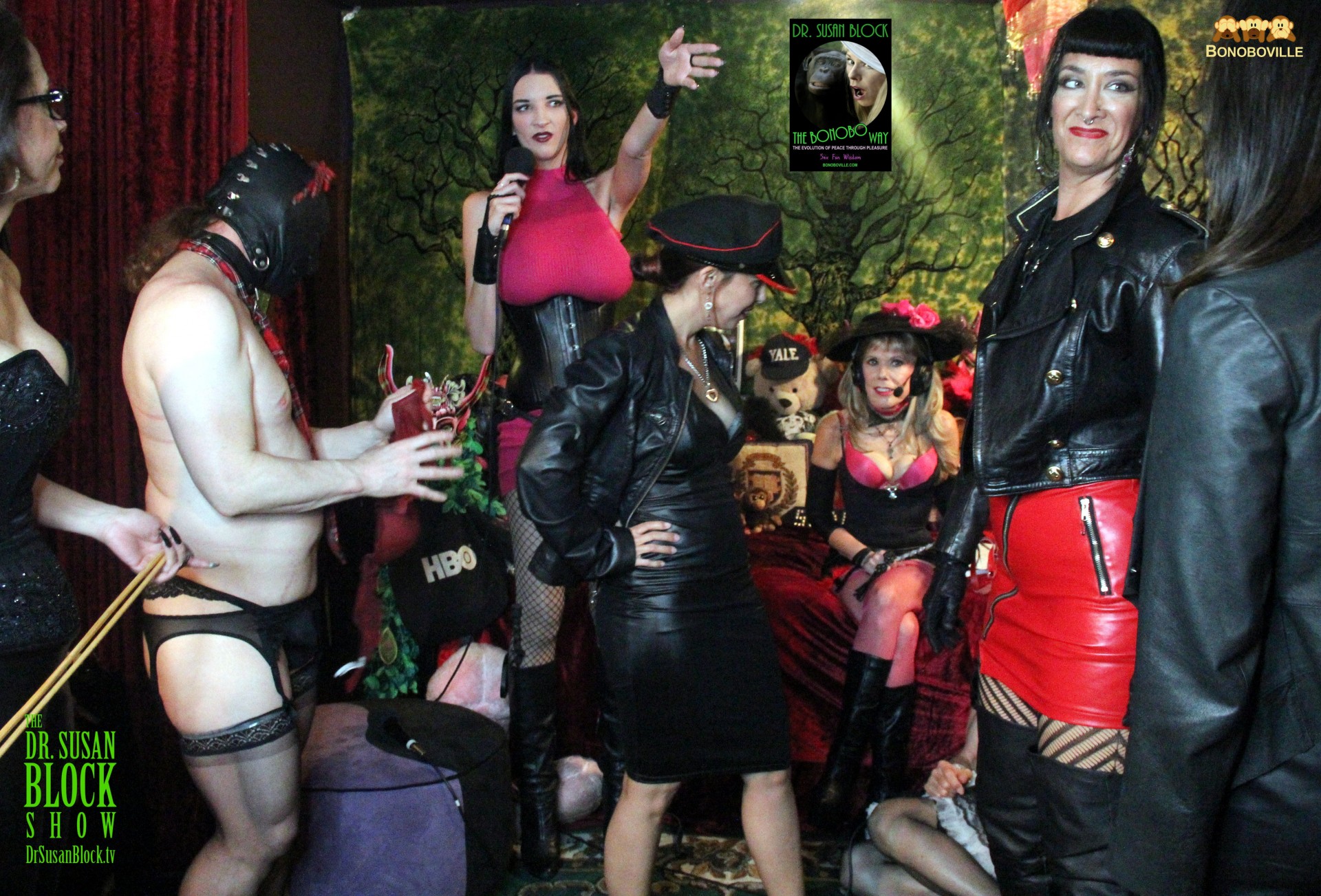 They also shackle the poor helpless, but very happy slaveboi to the cross (thanks for the shackles, Stockroom!), teasing and tormenting him with various implements, including a violet wand, and spanking him with The Bonobo Way.

Being an avid reader, the Goddess has great appreciation for using a good book as a paddle.  In fact, She comes up with some new (for me) book-spanking techniques, such as using the spine of The Bonobo Way to rub against Her slaveboi’s tender wounds. 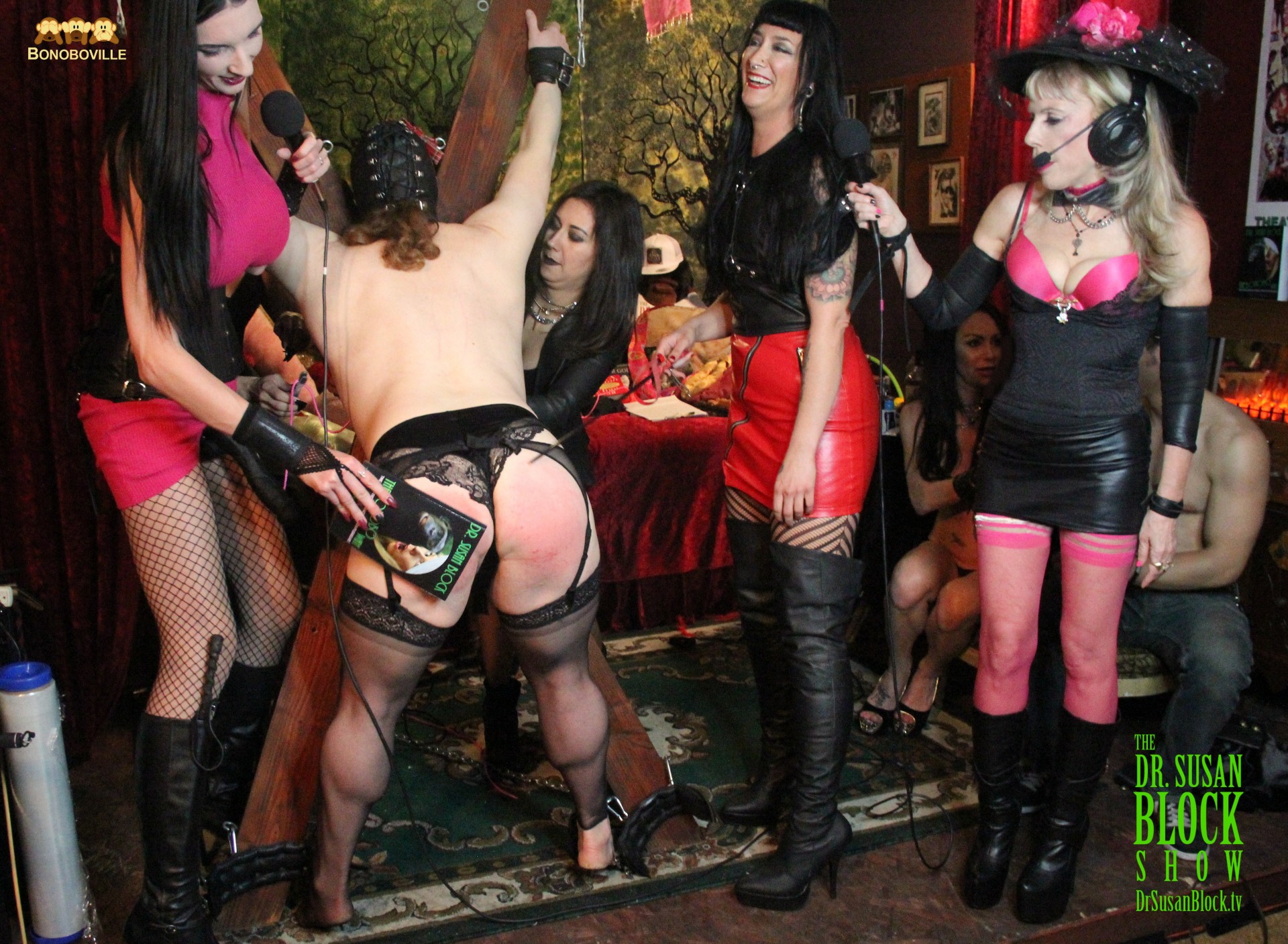 Goddess Fae gives Her own flair to book-spanking with The Bonobo Way. Photo: Ono Bo

She also creates original body art, carving the word “bonobo” and Her own name into slaveboi’s back with Her formidable fingernails. 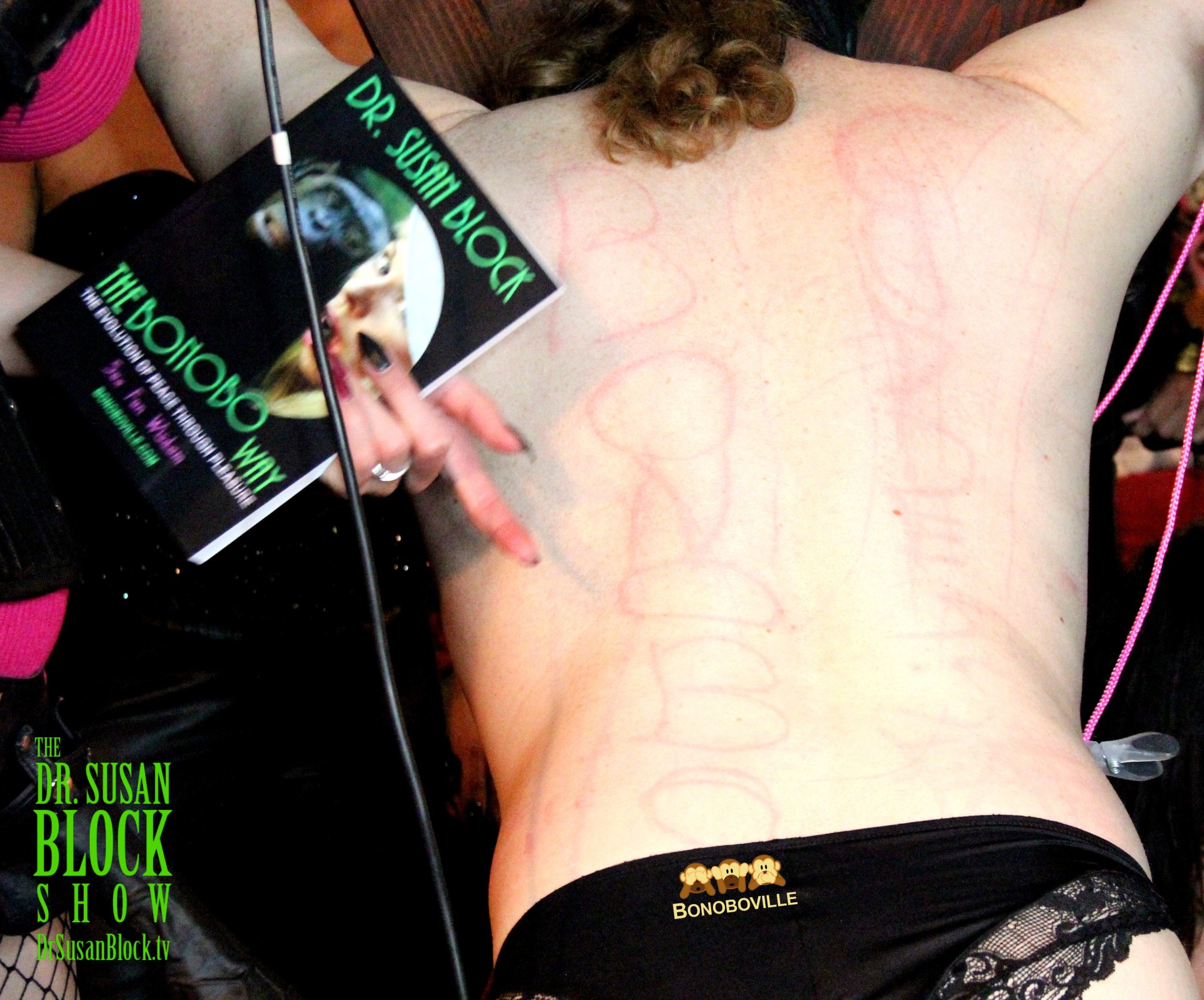 After all that spanking and scratching, the Goddess is thirsty, so She takes Bonoboville Communion with Chambord (Her signature drink), licking the pink (Her signature color) salt off of Dayton Rains’ bare breasts.  What a delicious big boob-lover’s delight! Sadly for us, when I ask Goddess Fae if she’d like to bare her 32H’s for Dayton’s Communion, she politely says “No.” This launches me into a verse of Meghan Trainor’s “No” song (which Ikkor the Wolf is the only one in the Womb Room to get), but unlike Meghan’s insistent suitors, I do “let it go.” After all the Goddess has so many other delights to offer us, which She does with elegance and aplomb. 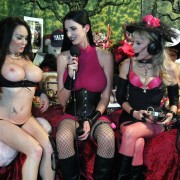 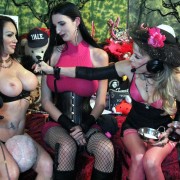 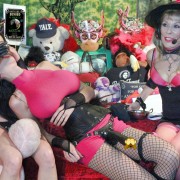 Mid-show, I take a moment to say good-bye to Dr. Toni Grant, ground-breaking radio psychologist and pioneer of media advice. Crippled by Alzheimer’s for the past several years, she died at the age of 74 in a Beverly Hills rest home on Easter Sunday, March 26th, 2016. I spent a lot of time with Toni back in the late 1980s when I collaborated with her on the writing of a New York Times best-seller, Being a Woman: Fulfilling Your Femininity and Finding Love (review). Though I was essentially her ghostwriter, she never called me that, but always a collaborator, and she would often introduce me as the girl who was writing her book. So after I finished, I asked if she could put my name on the cover in the smallest font available. Random House said it would be fine with them, but Dr. Toni refused. I know, I should have asked her just before I finished, but I was young and naïve and wanted to get the job done (and the rest of my advance) before stirring up stuff. She did give me inside credit, but the cover was out of the question for her. Then, because I’d had the temerity to ask for cover credit, she immediately stopped talking to me. So much for our “collaboration.” 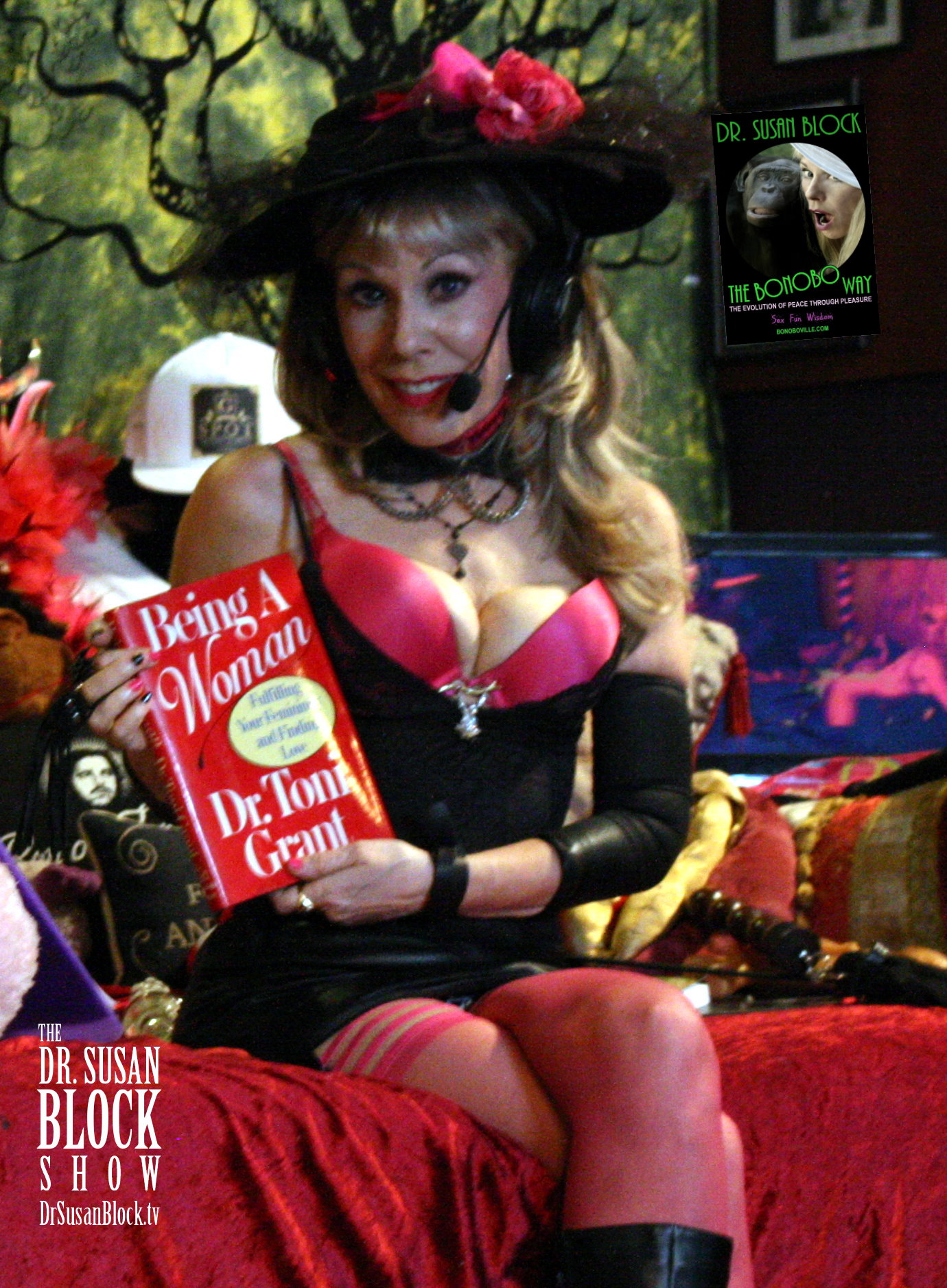 Being a Woman, the NYT Best-Seller I wrote with Dr. Toni Grant Photo: Bambi Bonobo

Within a couple years, I married Max and Dr. Toni married multimillionaire boxing magnate John Bell. I could say she used me, though I imagine she felt I pulled an All-About-Eve (her favorite film) on her. I did not. I just acknowledged that, yes, I wrote the book with her, when People Magazine, KABC, the LA Herald-Examiner, the Brentwood Bla Bla and other media outlets called me, tipped off by mutual friends who knew the truth. It was a sad, somewhat ugly ending to our otherwise fruitful collaboration, but that doesn’t erase the fact that Dr. Toni and I had some good times, some great times, mostly some very expensive times, all at her expense, because it was all for her book, which were mostly her ideas (I actually don’t subscribe to the majority of her beliefs about women and men), written up by me. I took a notepad and a tape recorder, recording our conversations as we talked about “being a woman” on cruises around Mexico and Hawaii, at Palm Springs spas, glittering Beverly Hills soirées and LA’s finest restaurants with some of LA’s finest men, all before writing her ideas up into the book on her new-fangled word processor—my first computer! No Internet, but it was a lot better than a typewriter. 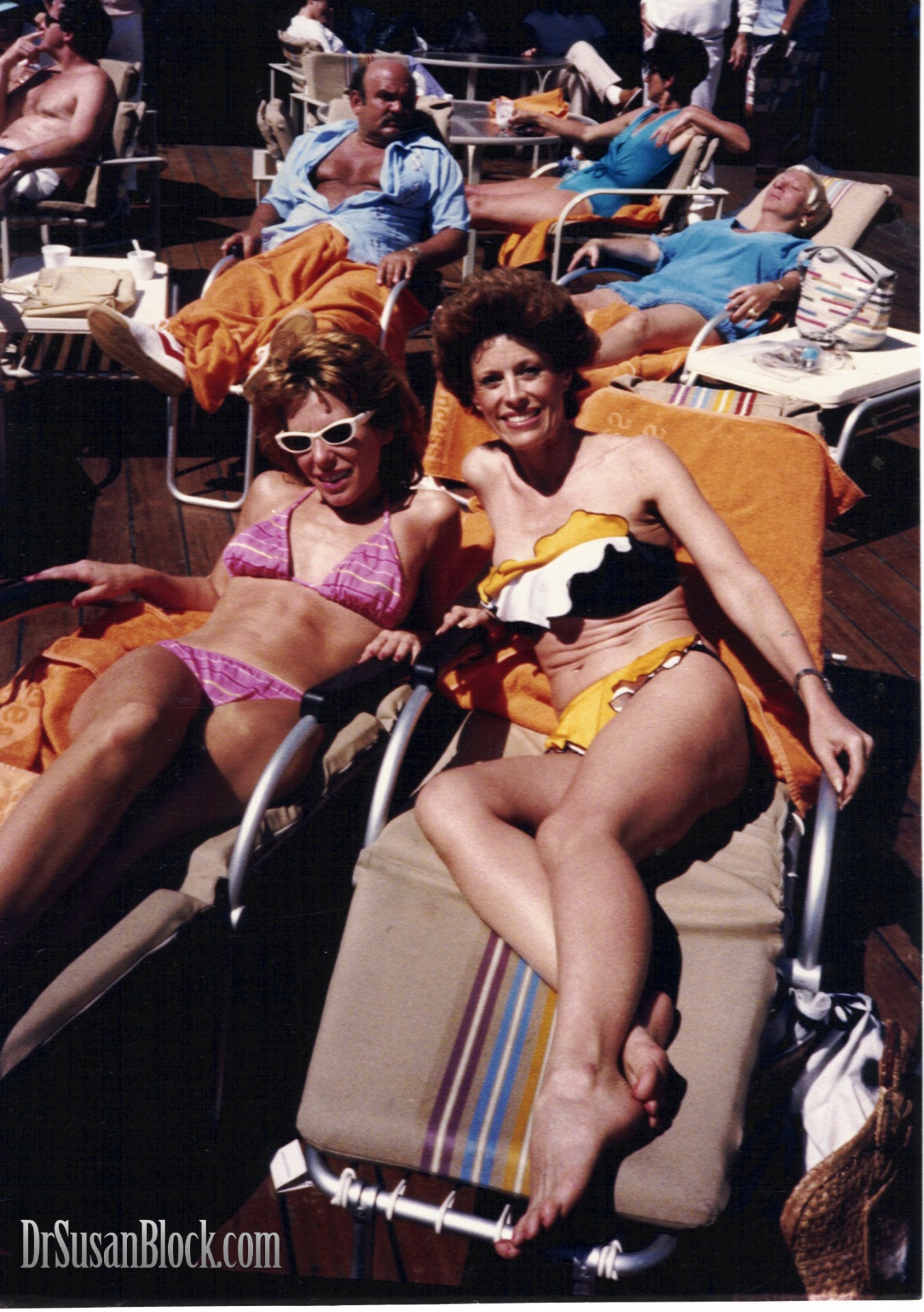 Cruising with Dr. Toni Grant as we wrote Being a Woman.

Max and I created a great romantic evening for Toni with an admirer of hers, Hill St. Blues actor John Cypher. One of my favorite phrases of Toni’s was “Life is not a dress rehearsal,” something to keep in mind, especially when someone who impacted your life long ago, passes away.

In what is becoming the all-too frequent “Obituary Corner” of the show, we also say good-bye to Counterculture activist Coco Crystal and Bonobo Conservation Initiative primatologist Deborah Moore.

Bonobos are the most FemDom apes on Earth.  Females rule Bonoboville, gently but firmly, which keeps the males gentle and firm, even though the males are bigger and sport fangs. This extraordinary female solidarity is created largely though genital outercourse among the females, called GG rubbing by primatologists and “Hoka-Hoka” by the Bongandu people who surround the bonobos’ native habitat. I also call it the bonobo tango, except instead of slow cheek-to-cheek, it’s fast vulva-to-vulva, often resulting in intense orgasms that sends the ladies falling out of their trees. All that hot sex bonds the females, encouraging them to literally stick together so they can keep the males under control. 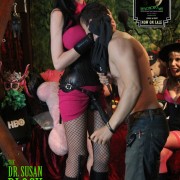 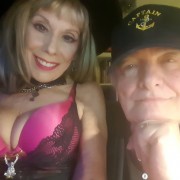 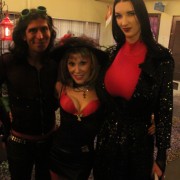 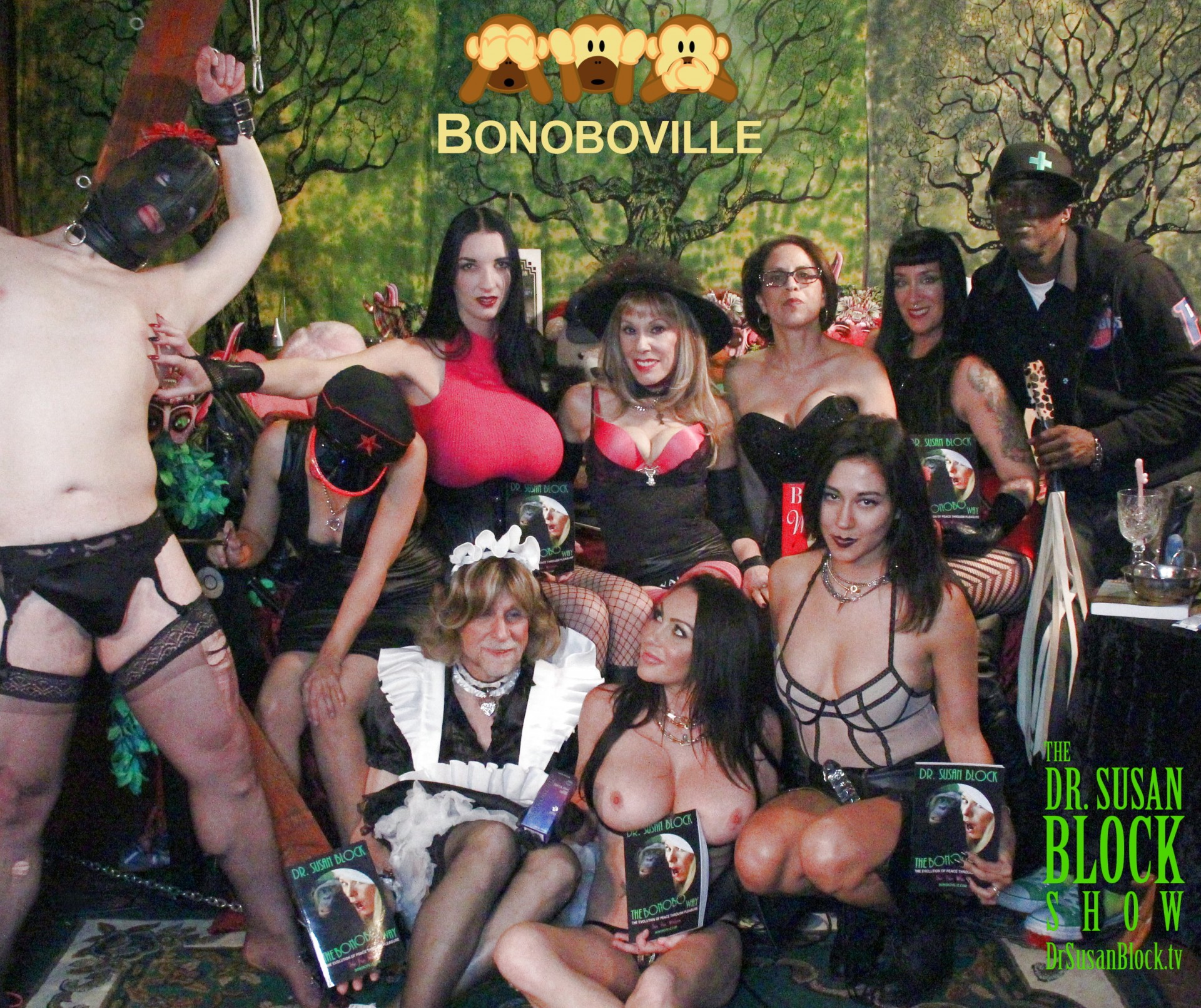 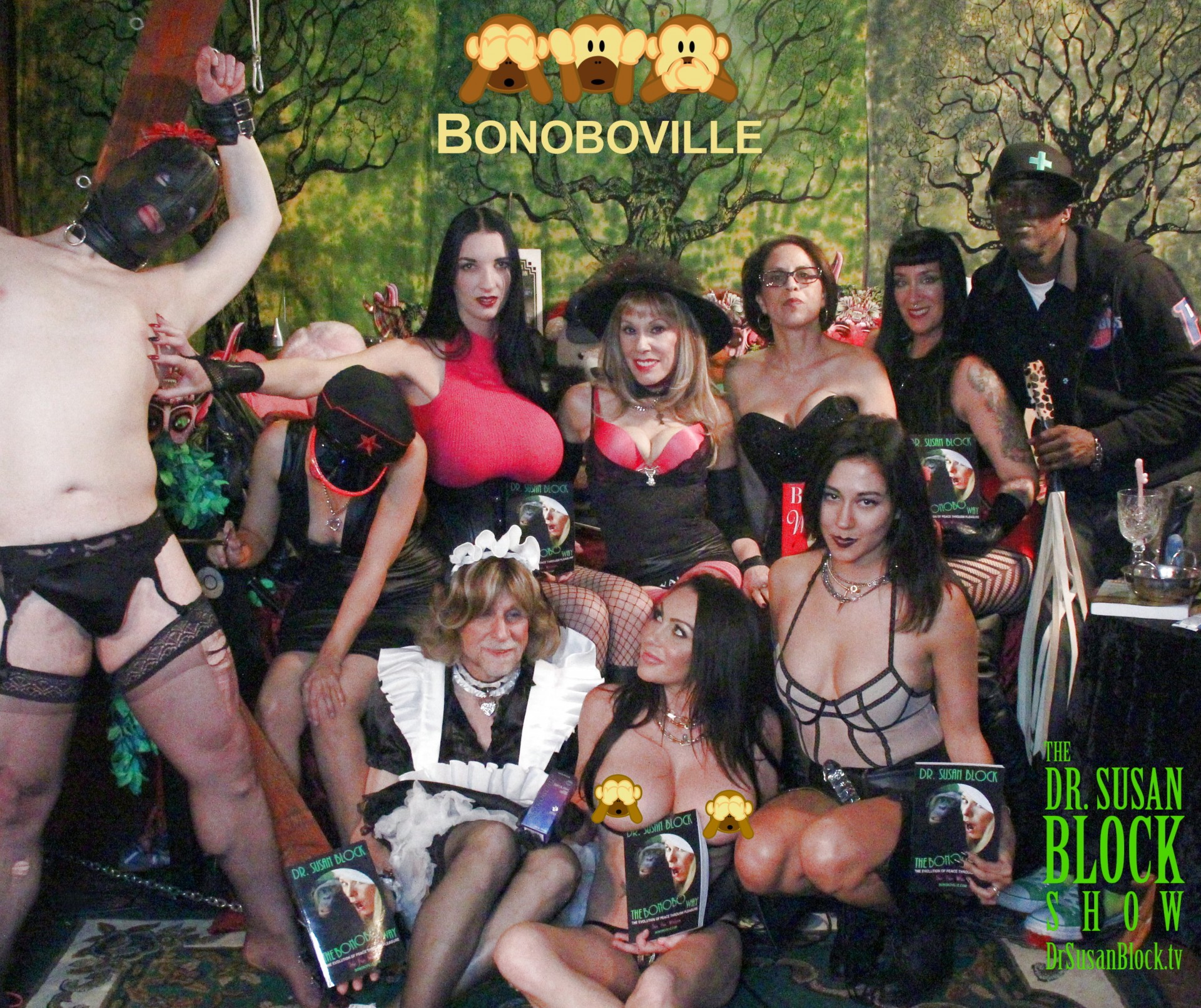