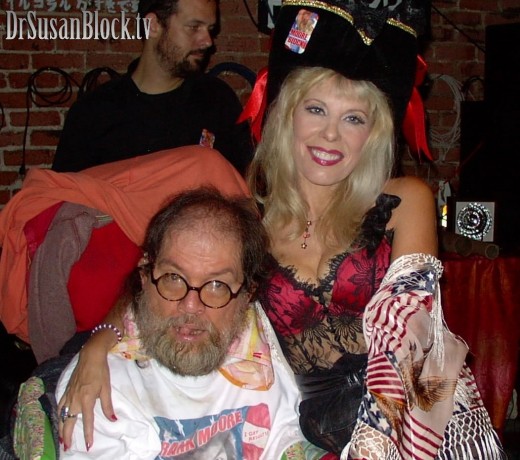 The world just lost one of its greatest artists. Frank Moore passed away this morning from the effects of double pneumonia. Frank was, without a doubt, one of the most marvelous people with whom I have ever had the honor and pleasure to work and play. Though I’m happy to hear he left this world peacefully, surrounded by his beloved family and friends—Linda, Mikee, Corey, Alexi and Erika—I can’t deny the grief I feel, tears falling as I contemplate his loss.

Frank meant so much to me, to Max and to so many others, and so many wonderful memories are swirling through my head along with the pain of missing him. It’s hard to know where to start with this little spontaneous remembrance.  So please forgive me, as I’m sure Frank would, if I skip around a bit as I try to pay him tribute now, on the day of his passing, for the benefit of those of you who knew him, as well as those who didn’t.

Frank was a man of tremendous, breathtaking accomplishment. An award-winning counter-culture hero, artist, poet, philosopher, rock star, filmmaker and happily married man, Frank was my U.S. Presidential running mate in our amazing 2008 campaign, the producer of The Dr. Susan Block Show on Berkeley public access TV as well as hosting and producing his own groundbreaking shows and an underground Internet radio station. Yet the first thing many people noticed when they saw Frank was his physical “condition.” That is, in addition to being all of the above and so much more, Frank happened to be quadriplegic.

Born with severe cerebral palsy that rendered him unable to walk or talk, Frank conquered what some might call his extreme “disabilities” to become one of world’s foremost performance artists, deep thinkers, political leaders and inspirational teachers. The Steven Hawkings of Erotic Theater, Frank coined the term “chero,” combining “chi” and “eros” to express the physical energy of life. He also created the word “eroplay” to describe the physical interaction between adults released from the linear goals of typical sexual intercourse, often in the context of long, 5-48 hour ritualistic performances. These performances, which I was privileged to participate in when he and his wonderful family were my guests here in Bonoboville, were transformative experiences that melted the barriers between participants, performers and audience. As such, Frank Moore was the ultimate wounded healer, a differently-shaped medicine man, a spastic magician, a wild shaman and a trickster lover, inspiring so many people, from performance artist Annie Sprinkle to Berkeley councilman Kriss Worthington. Of course, some folks feared his tremendous power, especially certain old-guard Republicans. In the early 90s, he rose to national fame as one of the NEA-funded artists targeted by then U.S. Congressman Jesse Helms for doing art that was labeled “obscene.”

I first met Frank on the web back in 1996, when his LUVeR Radio was one of the first Internet radio stations (along with RadioSUZY1). I invited him on my show when we were broadcasting from the old Villa Piacere in the Hollywood Hills. It turned out to be an even more exciting evening than we expected, since we were raided by the LAPD! We weren’t doing anything illegal, and we weren’t charged with anything; the cops probably just wanted to check out some of the hotties in high heels and lingerie that were starting to frequent the show since our HBO specials. But, this being my first raid, I was nervous, and I distinctly remember Frank calming me down. As a committed artistic and sexual revolutionary, he was thrilled to be raided. Wiggling around in his wheelchair with a mischievous grin on his face, communicating through his pointer on a symbol board with the help of his amazing wife Linda Mac, Frank helped me to relax and take pride in doing a show that was revolutionary enough for the LAPD to pay me a visit.

When Frank decided to run for President (yes, of the United States), he asked me to be his running mate. Of course, I accepted. I’d run for Prez myself against a different Bush in 1992, and I was happy to take a supporting role to Frank’s vision this time. Of course, write-ins never win, though the San Francisco Chronicle reported that we got a whopping 6,566 popular votes across America. We’re not sure how accurate that was, yet the point of our campaign wasn’t “winning,” but to inject an eroplayful, progressive shot of “hope” into America’s bloodstream. Read Frank’s platform, and you’ll see what I mean. 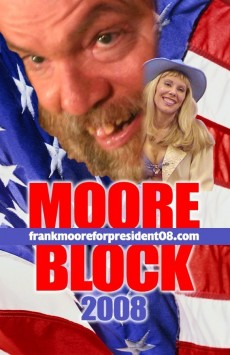 Whether running for President or orchestrating a love-in, Frank always said he had the perfect body for doing performance art. It was true; you couldn’t take your eyes off him. And then there was that wild mind—steeped in the ethos of the swinging 70s and the living theater of Antonin Artaud, Jerzy Grotowski and Richard Schechner. He was also a painter who painted with a brush attached to his head before he started digital painting on the computer. But what may have moved me most about Frank was his poetry.

So I’d like to close this tribute with a re-post of one of my favorite Frank Moore poems. I read it on my Wonderful Weirdos show. The poem, Mutation is Evolution, seems to me to be about how weirdness—whether physical “disabilities,” psychological uniqueness or sexual “deviance”—is a form of mutation which, as every elementary science student knows, drives the vehicle of evolution.  Therefore, society represses and tries to eradicate weirdness at its own risk.  Without the mutating power of the weird, we’d all still be single-celled organisms living in perfect, life-stultifying uniformity.

you foolish idiot!
You want to make
everything,
everyone
normal!
You want to cure
prevent
all crips,
freaks,
crazies,
oddballs,
slow ones
misfits,
bums,
artists,
poets,
and all other impractical
different looking
strange mutations
you fool!

How to condemn the human species
to extinction!

Look…
the game of evolution is
change by experimentation.

We freaks are the experimenters

the name of the game
is flexibly adapting
coping
leaping
risking into the unknown newness
of uncontrolled future
we crips,
we misfits have always been the adapters,
the leapers

hell,
I’m not wasting my time
talking to you about magic and such
just about evolution

Good luck to you, Frank, wherever you are. With or without that perfect body of yours, I’m sure you’re doing fine. As for me, I will miss you more than I can say. But I will continue to “freak” and experiment in your cherished cherotic memory.

And keep that arm rigid for me, Frank, I’ll be riding it again any day now… 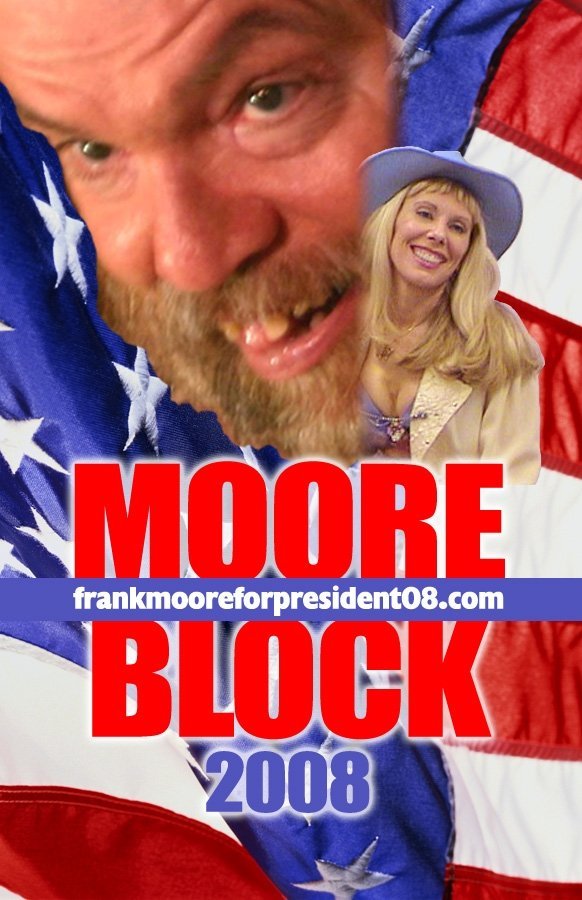 « KEGEL KARATE: How One Woman Learned to Destroy Her Molester with the Power of Her Own Pleasure » The Hollywood Show: Love Among Legends ♥