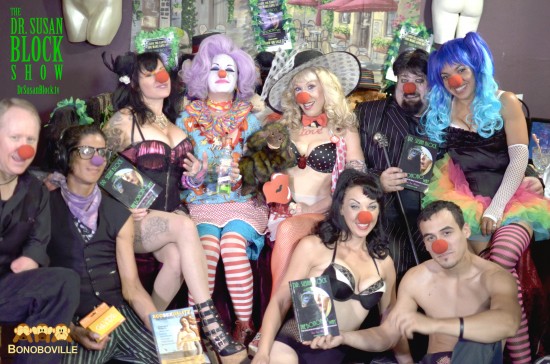 In a way, Bonoboville, like life itself, is always a “carnal carnival,” but for this bonobo-and-bozo-friendly episode of The Dr. Susan Block Show, that’s the theme.

Goth comedian Dark Mark is leaving LA’s sunshine for New Orleans’ mausoleums, and his virgin appearance on DrSuzy.Tv also serves as a freaky farewell to his LA friends and lovers. Amongst the entourage are several sexy ladies, one of whom could be the demented love child of Marilyn Monroe and Patch Adams, aptly named Clownalyn Monroe. Another is voluptuous burlesque Domme and “Pussy Bang-Bang” producer, Josi Kat, also co-host of Dark Mark’s ghoulish comedy talk show.

We also meet a “one-armed” comic named Joe Adams who—no clowning around here–practically makes Biz climax using his stump (covered with an XXX-tra large Glyde America cruelty-free, all-vegan condom) like a large, perpetually hard, oddly mobile penis, giving new meaning to the phrase “rub a nub.” Biz’s orgasm crescendos as she rides the Sybian, with Aaliyah Corsets (whose ass is featured in Citizen LA’s awesome new piece about Bonoboville, “The Pleasure Compound”) behind her and Dark Mark on the controls, as she opens wide and sucks Joe’s stump like it’s the last snow cone of the Bonobo Summer of Love. All this nub-rubbing brings back Capt’n Max’s memories of getting busted for publishing photos of Long Jean Silver “stump-fucking” Annie Sprinkle, and we realize that the Captain went to jail and eventually prevailed for our freedom to express our sexuality, whether we are “able,” “disabled” or simply mislabeled. 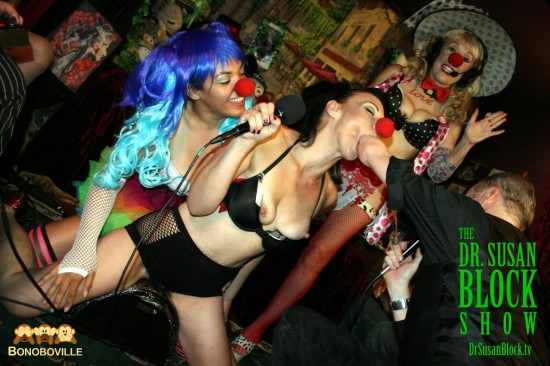 For the “clown fetishists” in the congregation, Clownalyn makes a balloon “dick hat” that looks quite stylish on Hollywood Jake’s handsome head. Biz strips for Mark, and we spank several bottoms under the Bonoboville Big Top. A celebratory #FreeTheNipple Bonoboville Communion with Agwa Coca Leaf Liqueur ensues featuring a brief but tasty sample of Josi’s ample boobage, Aaliyah’s delightful tatas, as well as Biz and Mark exchanging such meaningful nip-suckling that they put the communing in Communion. Del Rey gives us a taste of his juggling skills developed when he was a juggling monkey with the Humboldt Circus. Pretty soon, everyone is wearing a clown nose, or dropping theirs between somebody’s boobies. 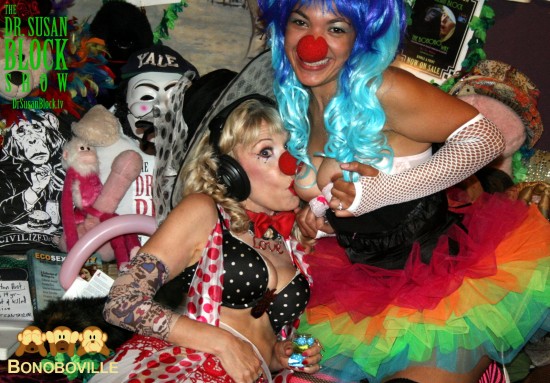 We have many serious announcements and momentous pronouncements regarding The Bonobo Way in the News, a free Ecosexuality foreword excerpt, Group Sex in Alternet (thanks Carrie Weisman), Dr. Zanna Clay’s important study finding bonobo “peeps” to be very similar to human “babytalk,” and the latest police atrocities (all the clowns agree that American cops really need Anger Management Training, Bonobo-Style). However, since much of this stuff is delivered while wearing a clown nose, how much of it, serious though it be, can we take seriously? 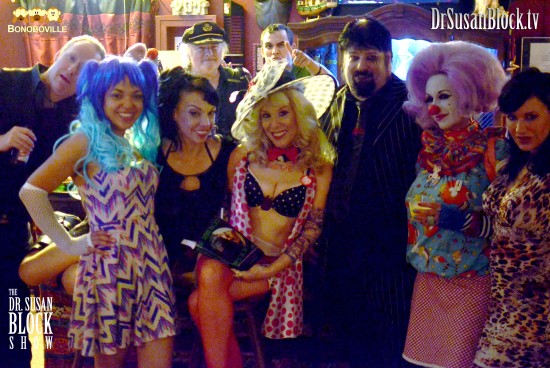 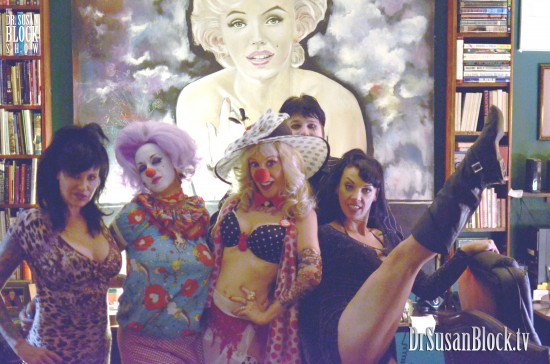 So we hope you laugh and come with us. Ride a friendly stump. Use your stump—or whatever perceived “disability” you might have—to give pleasure. Free the nipple, and the bacon. Juggle your balls. Make art out of the madness. The tragedies, atrocities, bombings, beheadings, injustices, stresses and frustrations of life just keep coming, but if you can find a fun, consensual way to release your “inner bonobo,” then just do it. Breathe deep, relax and savor the ride before it’s all over. Share the peace through pleasure. Join the Carnal Carnival of Bonoboville. Let your freak flag fly. 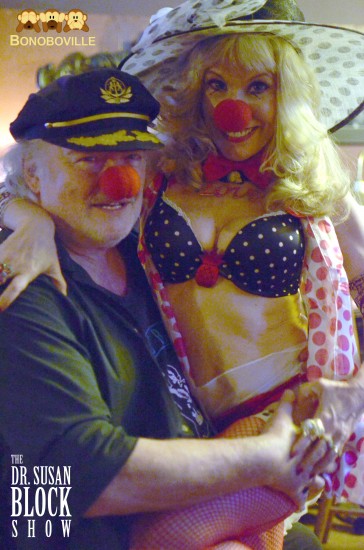 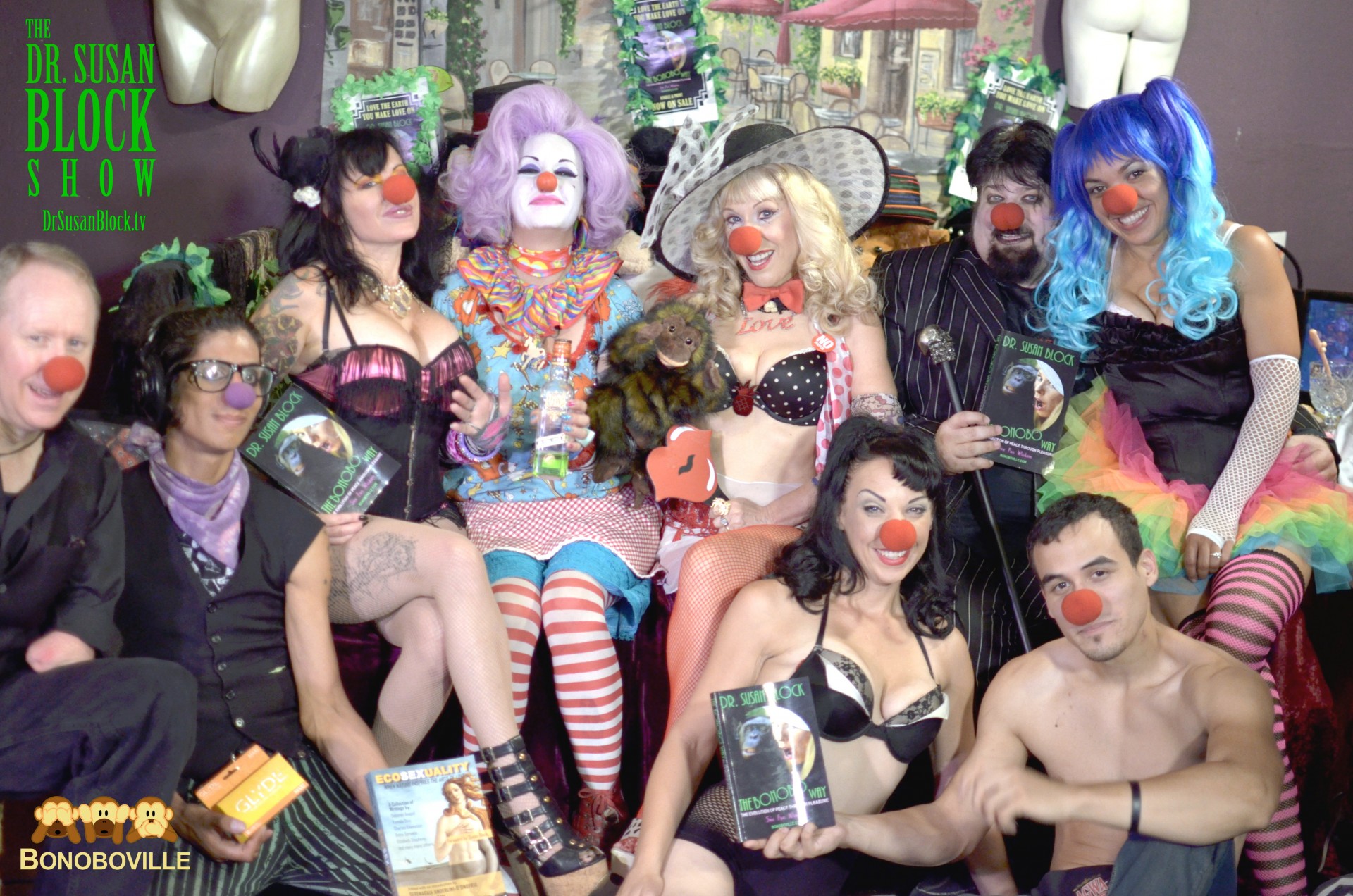